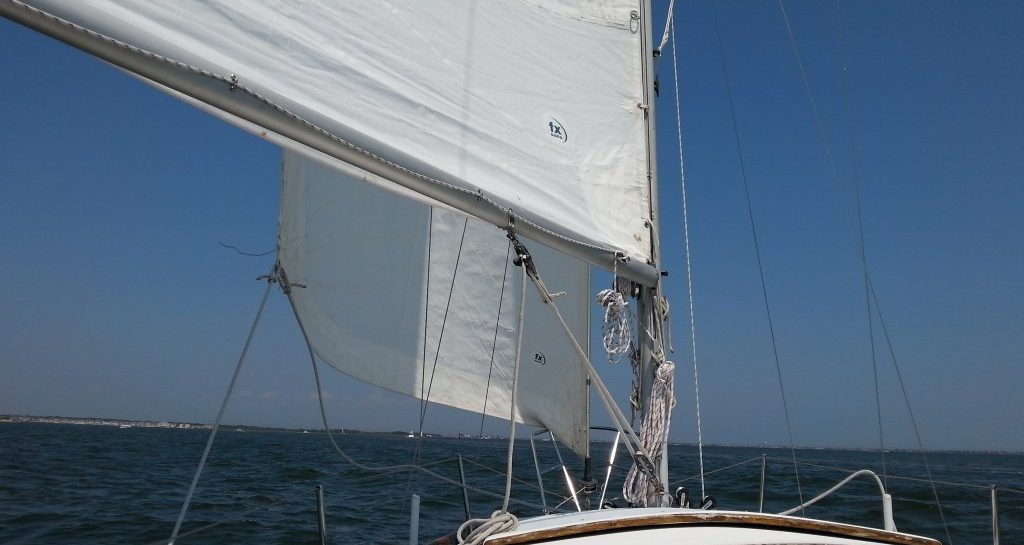 You thought you knew this bay. You thought that between the human-generated forecasts, the ones that come straight off the computer models, and your own experience of how they’re usually wrong, you could triangulate some general sense of what might happen. But here you are, bracing yourself on the starboard cockpit bench, pulling the tiller into your chest daring the boat not to round up, overpowered in a narrow channel with powerboats flitting around like moths.

A few hours ago

It’s dead calm at the marina. The guy on the next boat over from you is trying to wash the clean off his boat. He briefly looks up from his scrubbing.

“Is there even any wind out there?”

“It’s supposed to pick up.” You fire up the diesel and filter him out, listening for the splash of your exhaust. Your main is prepped. You’re going to put it up regardless. You make a mental note that you’ve already mentioned Chekhov’s gun too many times in your boat log to keep going back to that well, but remind yourself that it’s unlikely that anyone is reading closely enough to notice.

In the other direction, the usually empty slip has been occupied by the club’s most decorated sailors, in port on a respite from full-time cruising. The whole family is there, and they’re probably eating something healthy or playing a game that they spontaneously invented out of unmitigated joy.

You catch the reflection of your boat in the mirror-finished teak on either side. She looks like she has lost a string of ugly bar fights. Here she is again, ordering a double, neat, and letting her gaze linger too long on the large, flailing bunny rabbit at the end of the bar in the American flag wife beater. This is not a maintenance day though. This is a sailing day. Wind or not.

You look toward the bow. Jen already has the bow lines off and is looking back at you, waiting. As if it were some sweeping metaphor, you drop the transmission into reverse.

There is wind out there. It’s light, from the south, and you hoist everything to creep north on a broad reach toward Toms River. The whisker pole would keep the jib drawing better, but this is a leisure sail. You can harden up at 38 when you make the turn to go around Good Luck Point. Of course, you forgot the camera again, but you fumble for your telephone to snap the shot of the High Seas Radiotelephone Station that you didn’t have for your photo odyssey of Whiskey Oscar Oscar. 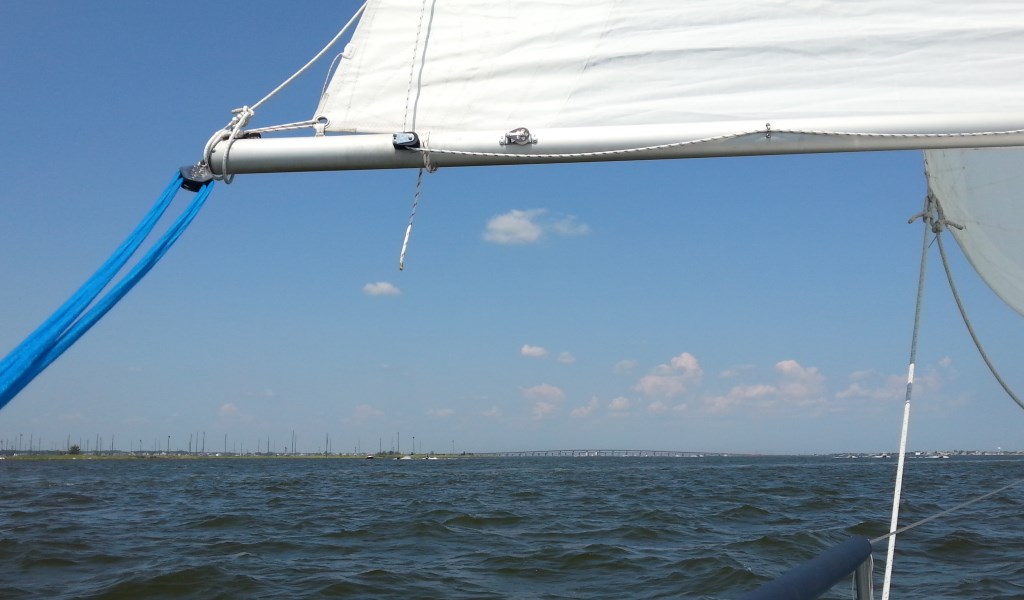 While you’re thinking of a simile for the uselessness of digital zoom, Jen asks you if you’d rather have her throw up over the side or in the head. The answer comes quickly (the side), but the implication sticks with you.

Although the expanse of water north of the point looks like you could safely sail anywhere, you recall that you dragged the swing keel of your old boat all over this mud flat. With the fixed keel of the current boat, you’d rather not risk exercising your towing insurance and ask your navigatrix to plot a course that will get you there the long (and hopefully deep) way.

The sails luff up suddenly as you make the turn into the mouth the river. You struggle to make sense of it. You went here specifically so that you could beam reach the length of the river and the wind had been from the south just moments ago, but now it’s on your nose and three times as strong as it was in open water. You’re not sure whether to trim in or turn around, but the curiosity of it all has you putting your back into the mainsheet and getting Jen on the winch. She’s still not feeling great and you wonder how you’re going to handle this by yourself if she starts blowing chunks over the transom.

The initial shock of it all dies down, but your mind is still racing, trying to figure out what is happening. It started just as you crossed the invisible line between the buoys, as if the wind was somehow respecting the navigational aids. You’re overpowered and fighting a ridiculous amount of weather helm, giving the south shore a fine view of your bottom paint as you pound through the chop and wakes. You try to imagine how you could reef, but there’s no room to stop, much less head into the wind and putz around. Sailboats up ahead don’t seem to be struggling, so you decide that maybe you’re just in the midst of some ludicrous meteorological anomaly and can ride it out. You strain against the tiller with your left hand and take the mainsheet out of the jaws with your right, ready to dump it if necessary.

And then it stops. Confused powerboaters buzz around you as you coast to a halt beyond the last channel markers. You look for answers in the waves, the flags on land, the clouds, trying fruitlessly to piece it together. 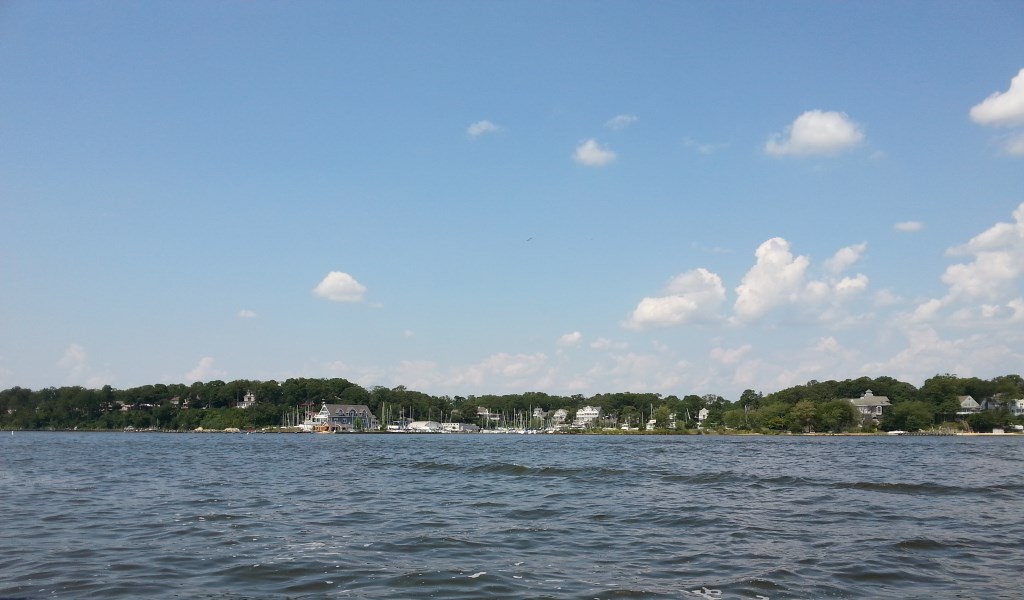 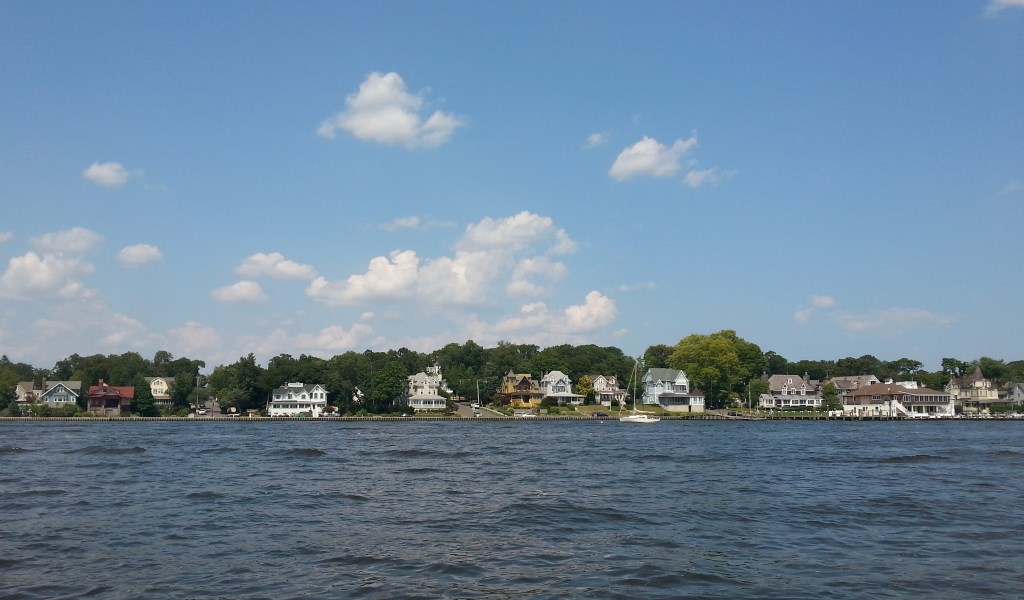 Jen is still feeling sick. Not seasick, but like she just downed a couple value meals at Arby’s. [You already miss Jon Stewart.] The heat of the day isn’t helping her, worse now with no breeze, so you furl the jib and start the engine to create a few knots of apparent wind. The river is quaint and it feels like something that belongs somewhere else.

You motor almost to the end of the navigable part and then idle the engine for a bit, swearing that you can feel wind beyond what you’re making by powering through still air. And you do. You swing the boat around and turn off the motor, reset the jib and sail slowly wing and wing on small puffs from the west.

As you cross the inflection point (again, at the channel markers), the wind leaps to 20kts from the southeast. It still makes no sense, but you’re somewhat more ready for it this time. Your course puts the wind just forward of your beam and the boat handles it better than she did close hauled, although you’re still not reefed down and exit the river as if on rails. Although some part of you knows that you’re overcanvassed, all of the other parts of you can’t resist sailing past a split-rig motorsailor, out practicing her storm tactics running jib and jigger. 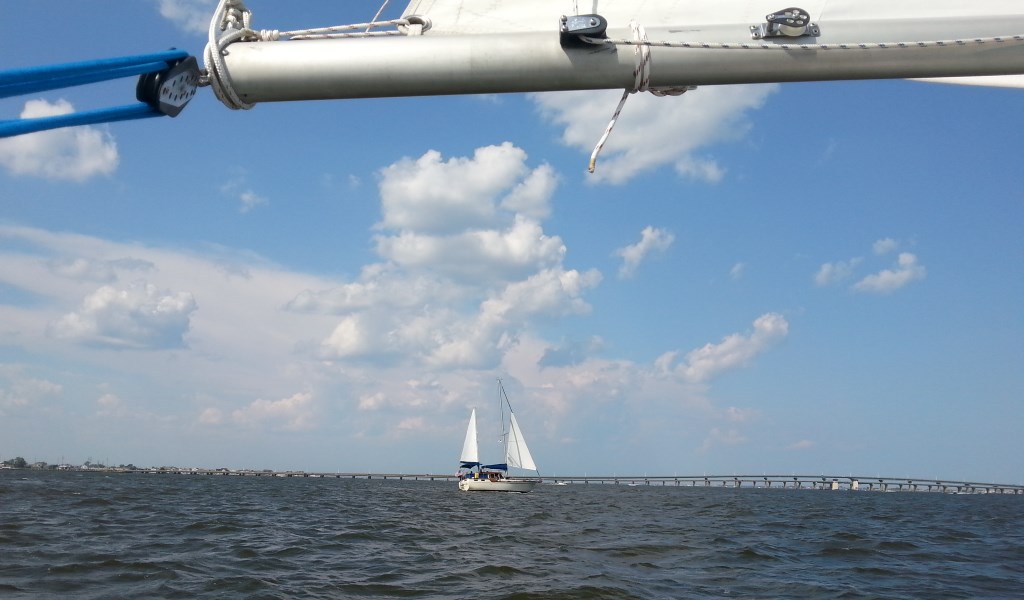 When you make the turn to follow the ICW and come close hauled, the switch does not get turned off. It’s just as windy out here. The sailing becomes excruciatingly annoying and you ask Jen if she wants to take the helm or go forward to tuck in a reef. Still not feeling well, she scrambles up on the pitching deck as you pinch up and scrunch toward the halyard winch. The reef goes in without too much trouble and you put four wraps on the jib to shorten it up.

As you come around 36, you’re suddenly exposed to the full fetch of the bay. The waves here are much taller, and as you crash through the first set you’re instantly soaked. You can’t help but laugh as it just keeps happening, like you’re stuck in an animated GIF where someone is throwing a pie in your face on a loop. There are a couple of jetskiers off to starboard, also running the channel by Martell’s. They’re apparently too afraid to drive at anything beyond an idle, making you the give-way vessel as you overtake them under sail. 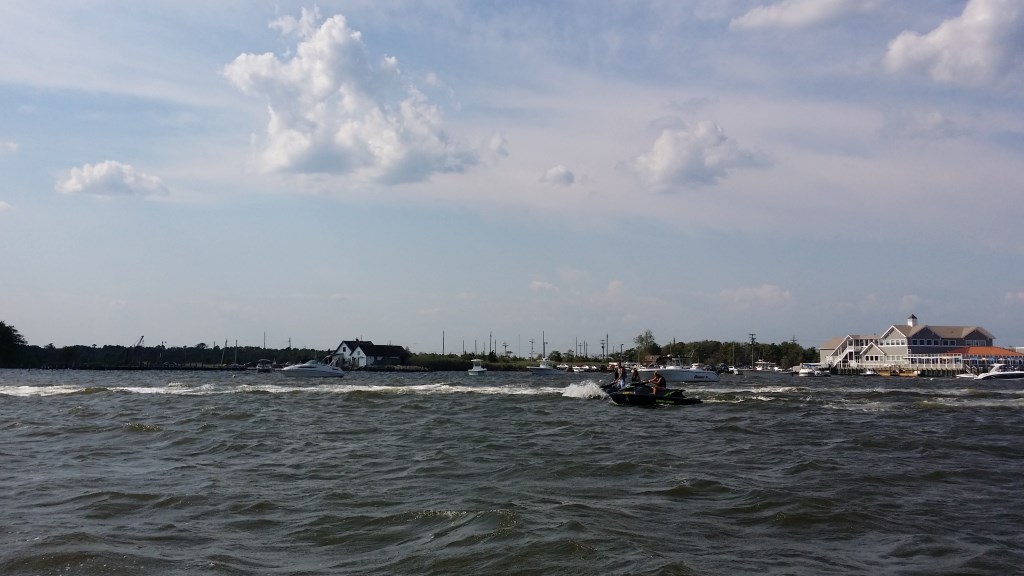 Jen asks, “Isn’t this what they live for? Aren’t they always trying to jump over wakes or something?”

“It’s best to not personify them.”

As you pass by, you try to forcibly conjure an air of dignity in your dripping wet aloha shirt and strapped-down Tilley T1.

At marker 39, you return to the open part of the bay. With your destination directly upwind, you give your still-ailing wife the option of motoring back or beating the rest of the way under sail. You clench your jaw, trying to stifle a smile at her answer. “Ok, then prepare to come about.”

The remainder of the sail is both furious and tranquil. The wind and spray never let up, but with the reefs in, the boat is balanced and stays on her feet nicely. You’re in perfect rhythm, communicating your mutual desires and intentions though the tiller. Finely working every wave. Letting her come up in the gusts. Anticipating the lulls. Reacting. Dancing. Sailing.

In the creek, you furl the jib and sail in as far as you can before starting the engine and dousing the main. The trees and houses along the shoreline don’t seem to be blocking much of the wind, and you have far too much time to ponder how you’re going to dock with a 15 or 20kt tailwind and your boat’s egregious prop walk between the floating teak palace and your new slip neighbors’ home. It had always been comforting to know that with no one to your starboard side, you at least had a 50/50 chance that any docking disaster might be completely innocuous. You attempt to simultaneously derive confidence from past docking successes and irrational things like fate and insurance.

Despite the trepidation, you ease in as if you’d done it tens of times.

In the following calm, you try to make sense out of the activities of the day. Jen never threw up. The wind was truly bizarre. You realize at some point that you’re 2/3 of the way to some sort of sailor’s serenity prayer: to accept the things you can’t change; to change the things you can. In this case, one would hope that you’d know the difference, but you were never very good at writing conclusions.

Editor’s Note: I blame Tim for this. He told me to read Bright Lights, Big City by Jay McInerney (which is great).