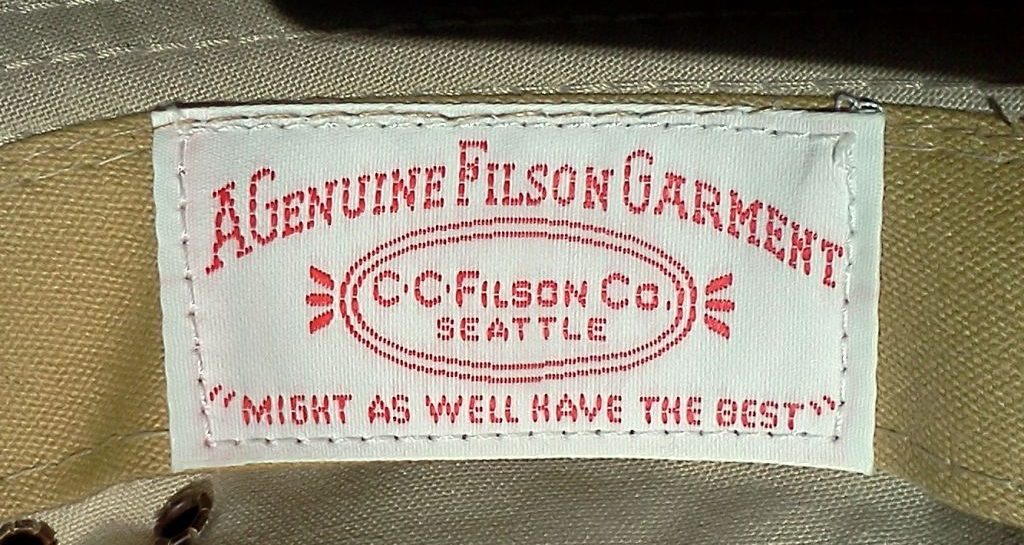 The crew of Fortuitous had a nice Christmas, and collected some fun stuff for the boat, including a new boat hat. 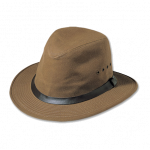 I’m kind of a hat guy, so I take my sailing hats seriously. My daily driver is a Filson Model 15 Tin Cloth Packer Hat. Tin cloth is a heavy canvas (12.5 ounces per yard) saturated with a paraffin-based wax for water repellency, and was named at a time when tin was synonymous with toughness. I love this hat, and wear it year round in inclement weather, but it really excels in cooler seasons. It tends to get wilty in very hot conditions as the wax softens, and it can be hot to wear in the summer.

Before this turns into a full-on apotheosis, I should say that I have an unhealthy affection for Filson outerwear. C. C. Filson made a name for himself during the Klondike gold rush of 1897 by outfitting fortune seekers headed north from Seattle with warm coats and clothing. A lot of their stuff still looks like it came from that era, and I have bought into their motto of “Might as well have the best.” Their catalogs used to be filled with tales of how Filson gear saved people’s lives and limbs, like “I was straight-up mauled by a cougar, and only my Filson Tin Cloth chaps saved my femoral artery,” or “I used the bridal leather shoulder strap from my Filson Medium Field Bag to hold the float on my seaplane after crash landing above the Arctic Circle,” or whatever. It’s still made in Seattle, their warranty policy is ridiculously generous, and it’s pretty much the only stuff I’ll wear. On land, anyway. While I love my 24oz/yd Mackinaw Wool Weekender Coat, my Shelter Cloth Outfitter Coat with removable wool liner, and the Small Carry-On Bag that I use as a briefcase, these were clearly designed for the 19th century gold prospector and not necessarily the 19th century sextant-wielding sailor that I strive to become.

So for some time, I’ve worn a Tilley T1 hat on the boat. Despite feeling a little traitorous by wearing a non-Filson hat, the Tilley has been very good to me. I like the styling, the brim is wide enough to give plenty of shade but not so wide that it hits every piece of rigging when I move around the boat, and the chin strap is really ingenious…it’s impossible to describe, and I can’t always figure it out even when I’m looking at it, but suffice it to say that it has a third mode beyond “under the chin” and “not in use” where it can still hold the hat on your head in light winds by tightening around your head on the inside. The hat also has built-in flotation, a secret pocket, a piece of velcro on the inside to let you strap sunglasses through the vents, and a manual so full of whimsy that it makes my teeth hurt. I like that it’s made in North America (Canada) and I love that the brass grommets on mine have turned green from copper oxidation—some people may consider that a negative, but it looks nautical as hell to me. But there are downsides to the Tilley. It seems to have shrunk a little since I first got it (or my head has grown?) and this has reduced the amount of air circulation, making it a hotter hat than it ought to be. It also stains easily, and my constant washing has not made it look much better and probably contributed to the shrinkage. Tin Cloth gains character with use, but Tilley material seems to take on the look of an old undershirt’s armpit.

I strongly considered getting a new Tilley a size up, but they don’t make the T1 model any more and I’m not a fan of the rest of their line. Their AirFlo hat has a ring of perforated material around the top, which I’m sure is cool but I’m not sure how it would perform in heavy rain or spray. I think the ones I’ve seen are also nylon and look extremely plasticky to me. That would probably address the shrinking issue and be easier to clean, but I know myself well enough to know that I’m simply not going to wear a hat if I don’t think it looks good, no matter how useful it may be. Their other designs all seem to have very high crowns which I don’t like either. They make some fantastic looking hats for just wearing around, but there isn’t much that looks good to me that’s appropriate for boating.

Well Santa has stepped in and brought me a Filson Summer Packer Hat in Desert Tan with the optional chin strap. The styling is very similar to my Tin Cloth Packer, with a “just right” crown height and a conservative look (like the clip art search result for “hat”) but the Summer Packer is made with safari weight dry-finish (no wax) 8oz/yd Shelter Cloth and a slightly wider brim. I might wind up modifying the chin strap to work like a Tilley, but this hat sure seems like a winner. I can’t wait to try it out.

The Sailing Fortuitous staff hope that everyone had a nice Christmas and will have a happy year. Fair winds.

UPDATE, May 2013: Although I really like the Filson Summer Packer hat as a summer hat on land, it’s not a good boat hat. The brim is too floppy and wide, and any kind of decent sailing wind makes the brim flop down over my eyes. Sometimes it flops up, which is preferable in that it allows me to see, but then it does nothing to shade me from the sun. I’m still wearing the same Tilley T1, although after another season it’s even more yellowed despite regular washings. It hasn’t shrunk any further, but it’s still about one size too tight and requires constant re-stretching to be comfortable. Both of these hats would also benefit from having dark colored fabric under the brim to cut down on glare. If the T1 were still in production, I’d buy another one in a second (just a size larger) and maybe figure out a way to get some green or taupe fabric under the brim. As it is, I’m not in love with anything else in either line, and intend to keep wearing the Tilley until it falls apart, which is probably still years and years away.

UPDATE, January 2017: Check out my new Tilley hat in A Tale of Two Tilleys.