This title sounds somewhat like “a sail of two sillies” said with a certain speech impediment, and while that may accurately describe the crew of Fortuitous, in this case I’m referring to Tilley hats. 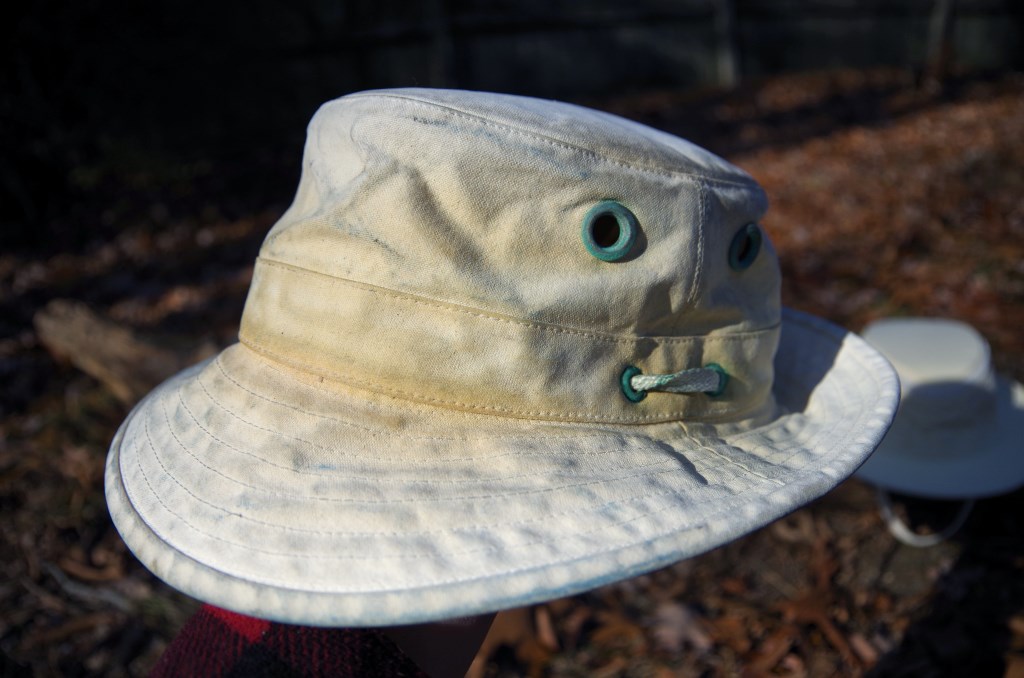 For years, my primary sailing hat has been my trusty Tilley T1. It’s very close to being a perfect hat. The brim is wide enough to give protection from sun and rain, but not so wide that it flops around in the wind or catches on everything as I bumble around the rigging. Over time, the fabric has become stiff in a pleasant way that allows it to be shaped simply by bending it, so I can wear the back down in weather, or up like a jaunty fedora around the marina. The cotton duck has also acquired a certain detergent-resistant patina that may be too much for the weak-stomached, although it has never really bothered me and merely serves as a reminder that it’s a working hat and not a yacht prop. The best marker that it’s been properly broken-in may be the British brass grommets, which, at this stage, are as nautical as a schooner’s portholes. 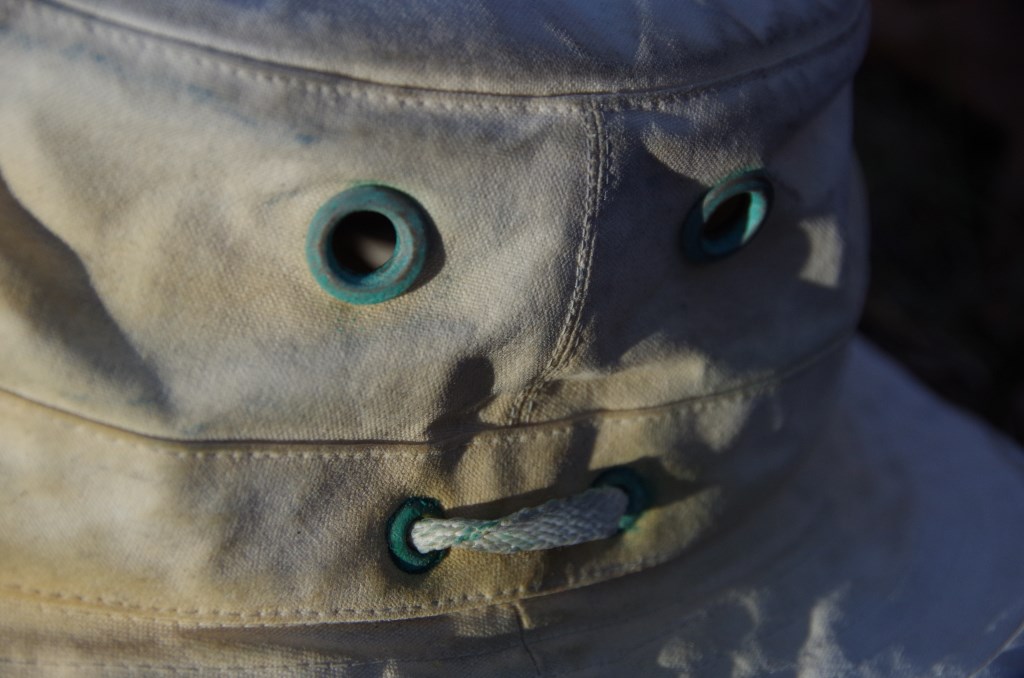 In 2011, a Filson Summer Packer attempted to dethrone the Tilley, but lost out, despite my love of all things Filson. The brim of the Filson was too wide and far too floppy, and was constantly either blowing up, leaving me with no protection from glare or spray, or blowing down over my eyes, rendering me blinded. It’s a very nice hat for a summer walk in the woods, but it’s definitely a land hat.

This Christmas, I got a new Tilley hat. 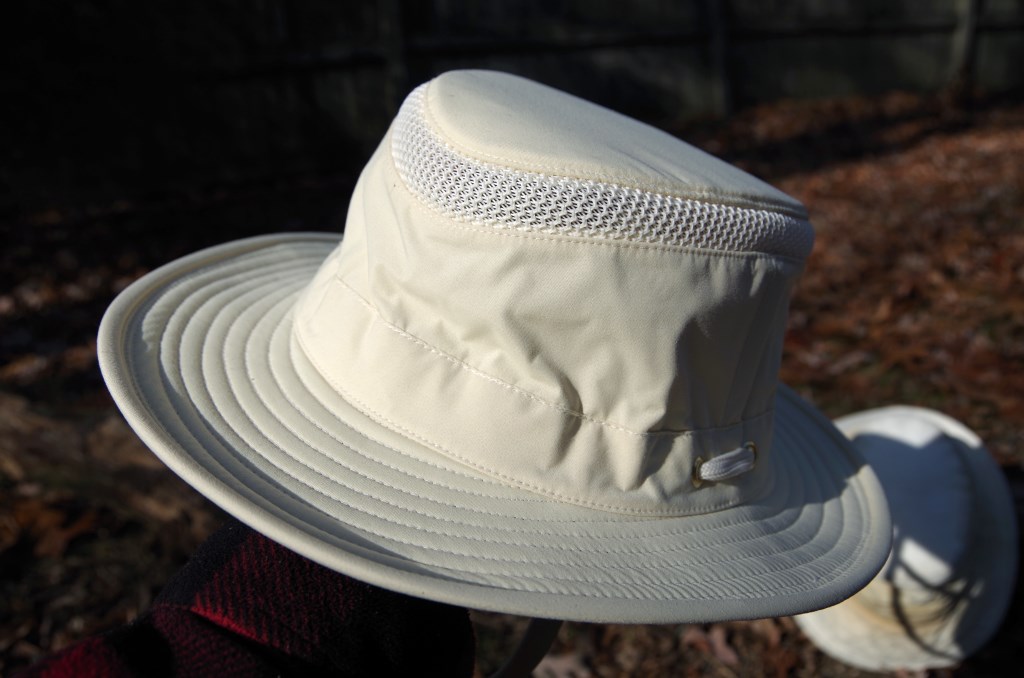 This is a Tilley LTM5 Airflow. I have no doubt that it’s made to the same persnickety standards as my now-discontinued T1, although there are some major differences. For one, it’s made of nylon instead of cotton—actually, they call it “Nylantium,” but I think that’s just whimsical Canadian marketing. It’s a lot lighter than my old one, and I imagine it will be cooler on those days when we’re becalmed at noon, being slow-roasted in the summer sun, waiting for the sea breeze to fire up. I’m guessing that the synthetic materials will also be more stain and shrink resistant. Instead of grommets, it has a 3/4″ section of mesh at the top. This is what gives it the “Airflow” moniker, and although I’ve historically had some concerns about the mesh’s ability to stop rain and spray, everyone I’ve talked to about it has said that it’s a non-issue. One of the features that I’m most looking forward to trying is that the underside of the brim is a dark green color to reduce glare. I’m not sure if there’s science behind it or not, but I’m curious to see if it’s noticeably better. 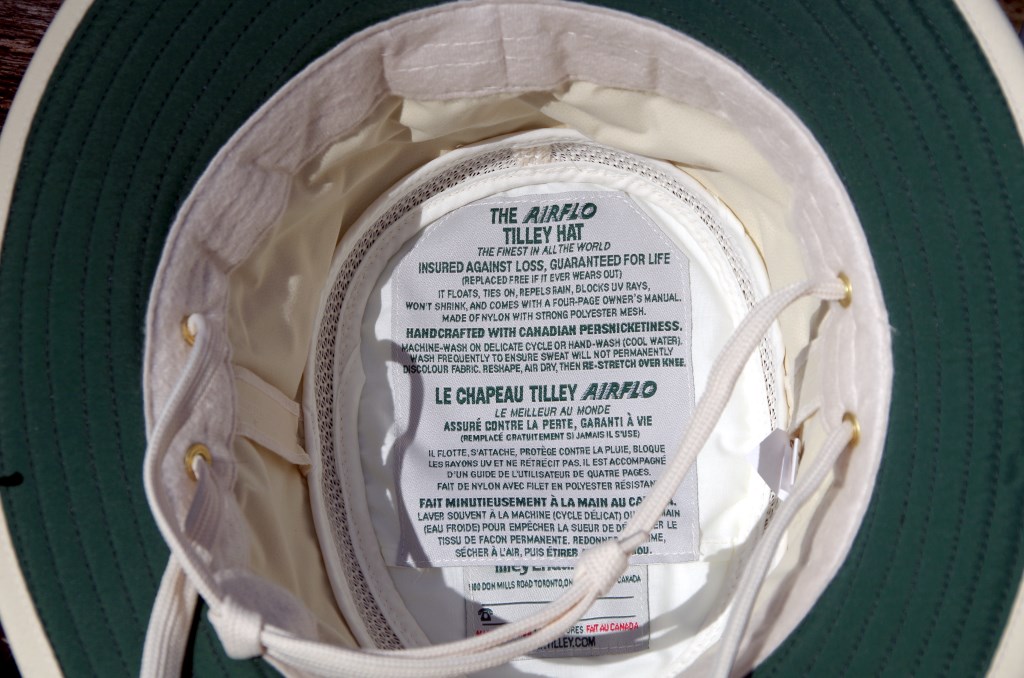 Like all Tilley hats, it floats, it’s UPF 50+ it’s guaranteed to never wear out, it’s insured against loss and destruction, and it may or may not have a secret pocket inside (shh). It came with a manual in the style of the old manuals, but perhaps slightly less twee. They’ve apparently discontinued the “brag tags,” for example, which were little business cards that you give to people admiring your hat. Of course, I still have mine from my first hat.

Most Tilley Hat wearers, and the person beside you is a prime example, are interesting people of sterling character. It is well worth cultivating their acquaintance! To that end, you’ll be pleased to learn, it is customary to provide the giver of Tilley Hat procurement information with A WARM HUG, OR STAND HIM OR HER TO A DRINK.

I’m excited to try it out. Partially because of the hat, and partially because it will mean that I’m sailing. No matter what happens with the LTM5, the T1 isn’t going anywhere. It may be relegated to race duty or situations in which I don’t have to interact with normals, but despite any cosmetic challenges, it’s still structurally sound and not close to wearing out. Tilley makes a fine hat.

4 thoughts on “A Tale of Two Tilleys”