I’m writing this in an active thunderstorm. In February.

This is the time of year when I’m ordinarily complaining about snow and freezing temperatures and wishing for warmth, but we’ve been running about 30° above normal for much of this week. My colleagues have been inadvertently rubbing it in, asking me if I’m going to sail, not understanding that Fortuitous is on the hard—she can’t go in until the marina opens and starts launching boats with their heavy-lifting machinery in April. All of the boat talk made me start to get the twinge to do something boat-related, but it’s a little early for me to get too excited. The current thunderstorms are the product of a cold front, and today’s high of 73°F will be replaced with 46°F tomorrow.

I wanted to do something today to take advantage of the weather, though. Something that would take my mind away from the boat, computers, the insane ramblings of the populist regime, and the general chaos. Time for a walk in the woods. 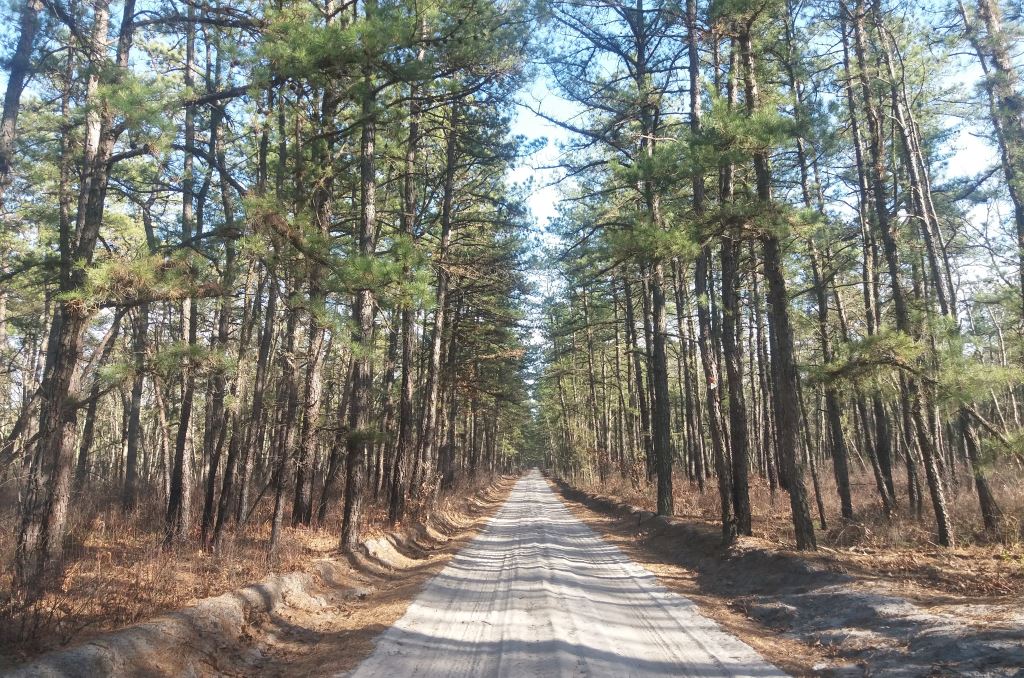 I found something on my maps that I’d never been to before called the Marilyn Beard Trailhead, and thought I’d check it out. It’s in or around Atco, which is probably the closest part of the Pine Barrens to my house. I’m not sure I actually found it. I found the sign that indicated I was there, but there wasn’t an obvious trail…just a dirt road with blazes on it. I decided to drive it for a bit to see if it would get interesting, or if there was some portion where it became a footpath.

It was warm and sunny when I started out, with a decent breeze. I got out of the car to walk through a stand of cedar trees. The ground was pretty wet, as it usually is by cedars, and I didn’t get very far, but the sound of the trees creaking in the gusty wind was worth it. I went back to driving, attempting to get lost in this part of the woods. 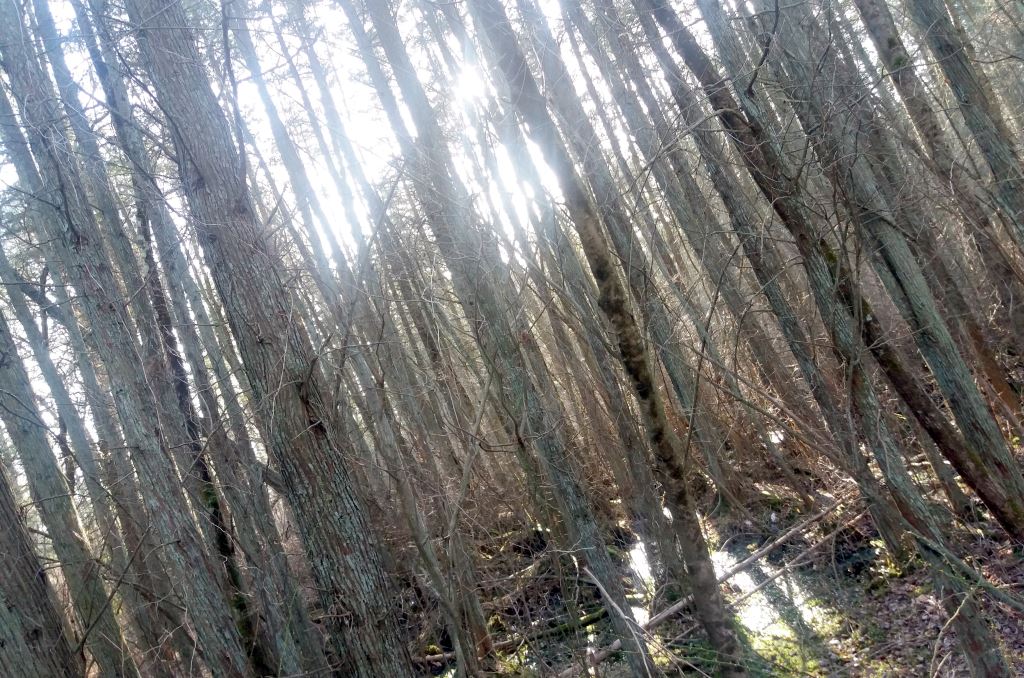 I grew up in the woods though, and it’s difficult for me to get completely lost. Eventually, I found a set of abandoned railroad tracks, which tipped me off to where I was. 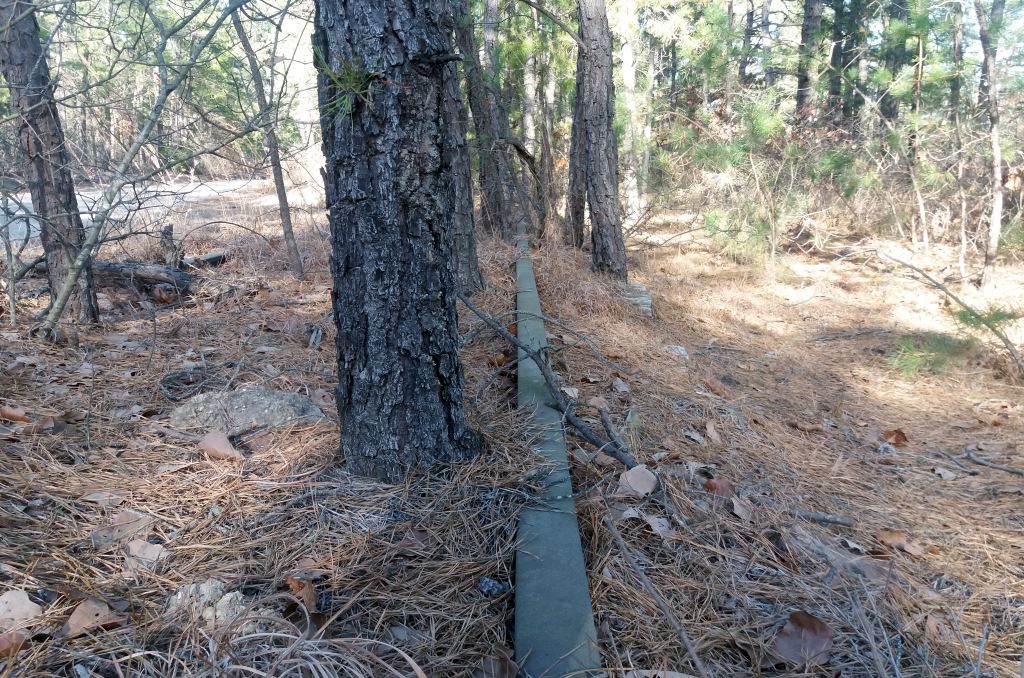 This was the branch of the New Jersey Southern Railroad track that ran between Atco and Atsion. I’ve walked all of it from Atsion to Chatsworth, but never on this side of Route 206. The New Jersey Southern started out as the Raritan and Delaware Bay Railroad in 1854, with the intention of connecting the two bays by rail. In the 1860s, it was used to move troops and supplies for the Civil War. While I’m not certain about this branch specifically, this route later became part of the Jersey Central Railroad, where the Blue Comet operated passenger service from Jersey City to Atlantic City between 1929 and 1941. It’s easy to think that nothing ever happened in the Pine Barrens, but the ruins of industry and commerce are still there if you know where to look.

Despite finding the tracks, the hiking prospects didn’t seem great, so I decided to drive to Atsion and walk the tracks over there. 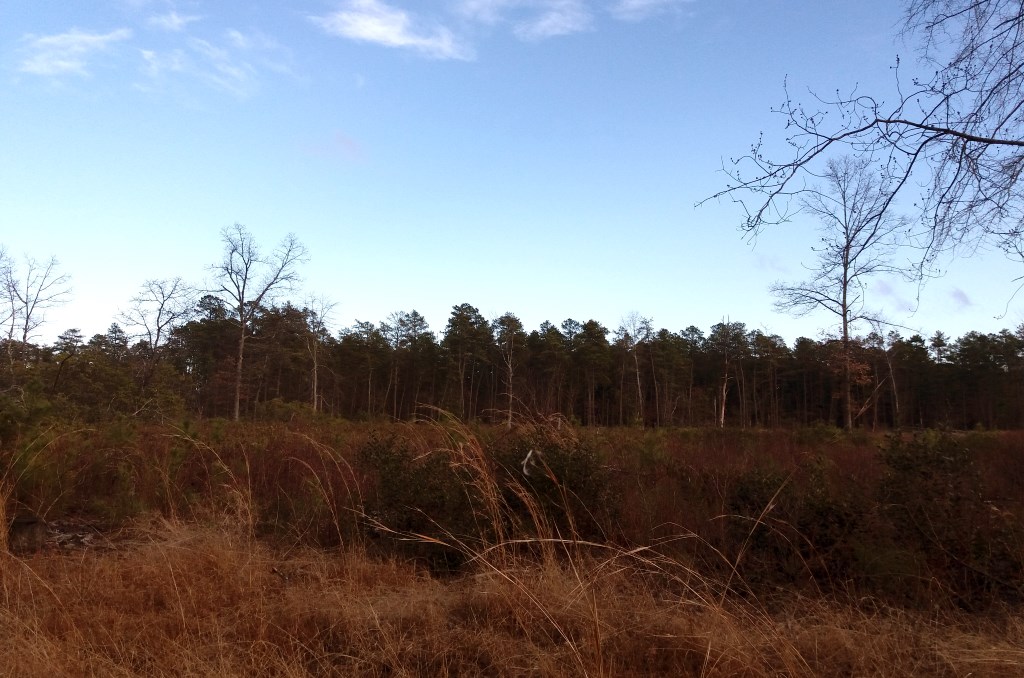 I’m still impressed with what my Subaru will do. This isn’t deeply challenging off-roading by any stretch, but I’ve definitely buried front-wheel drive cars in sugar sand before. The Subaru doesn’t seem to notice. Plus, I think it makes the lifted Jeep drivers sad when I drive by them in my station wagon. 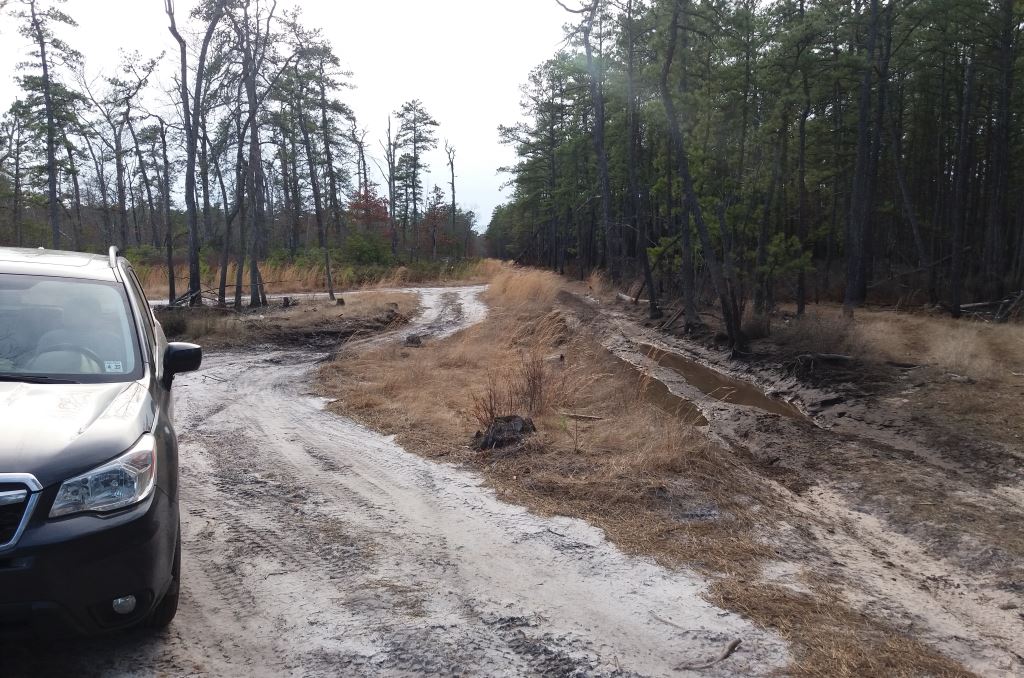 As I started walking, I noticed that the trees were burnt. There must have been a controlled burn at some point, although there was enough brush around that it couldn’t have been that recent. The forestry service does this from time to time to remove excess fuel that could turn into an uncontrolled forest fire and to generally promote the health of the forest…fires are a natural part of the ecology. 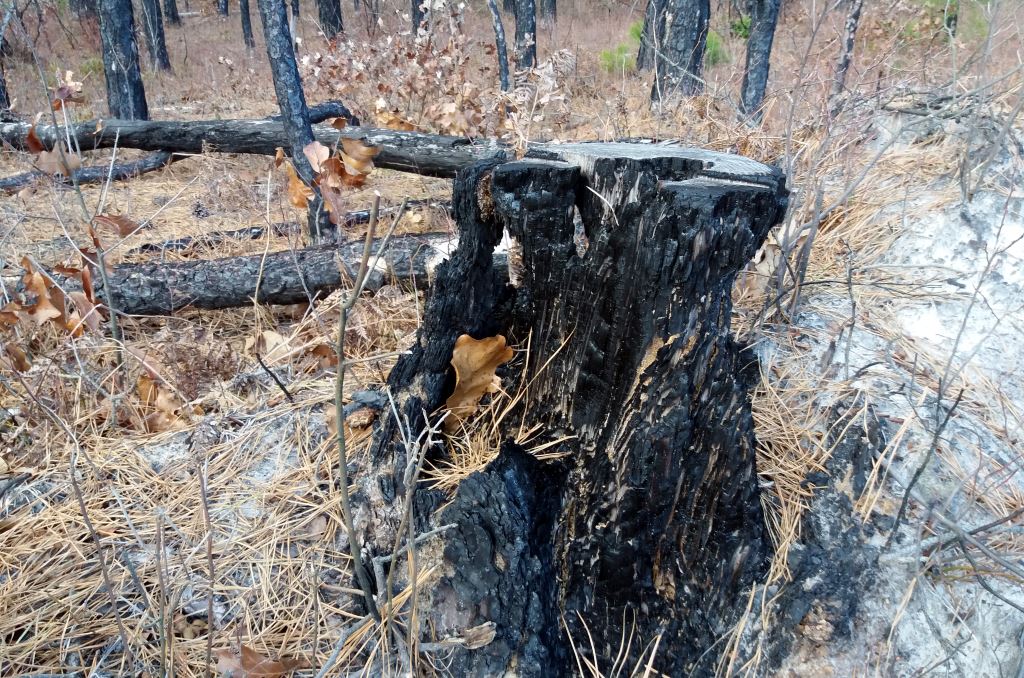 When I was checking on Google Maps later to see where I’d been, the imagery for this area shows smoke from burns near where I was. 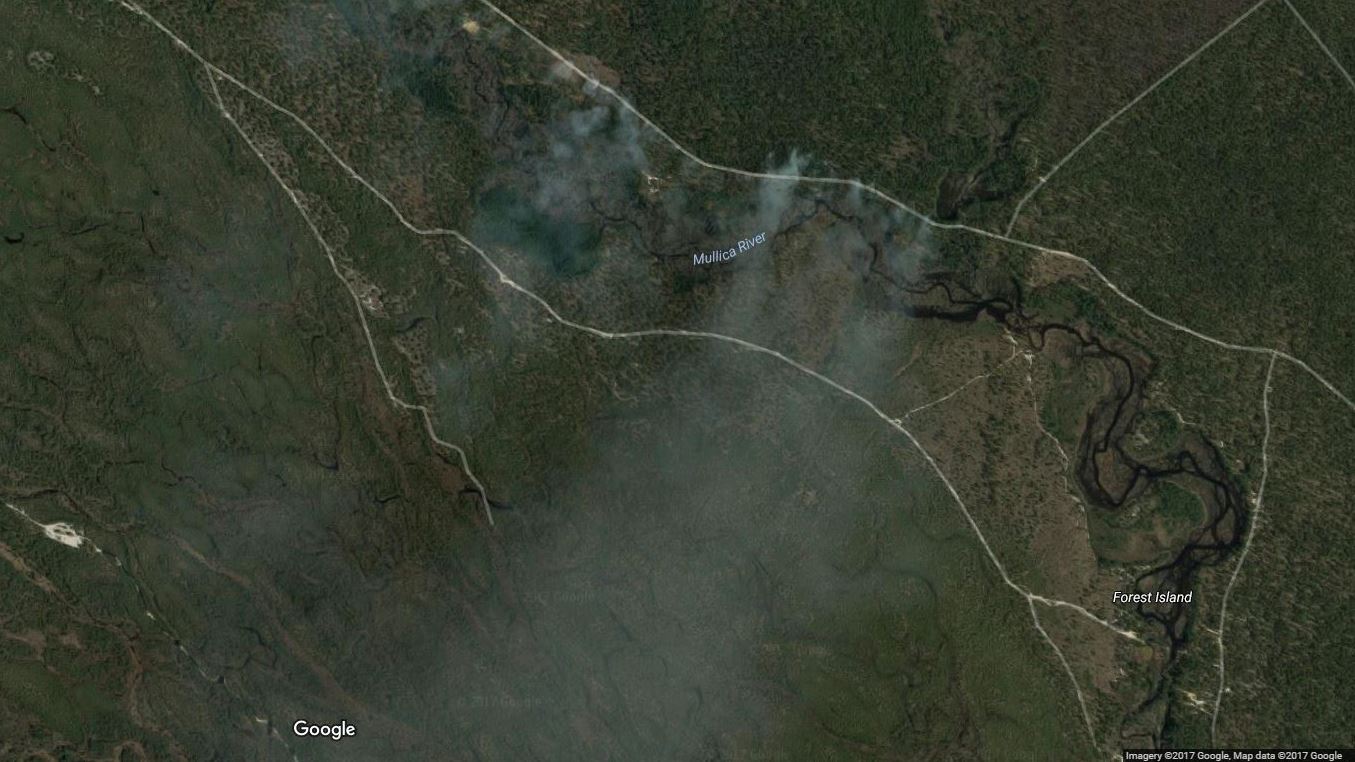 Regardless of how healthy prescribed burns are, the upturned trees and charred bark weren’t doing anything to take me out of my sense that I’m living in a dystopia, but I walked on, hoping that I could get to the railroad bridge over the Mullica River before the rain started. By this point, the sky was overcast and the wind had picked up considerably. That cold front was approaching. 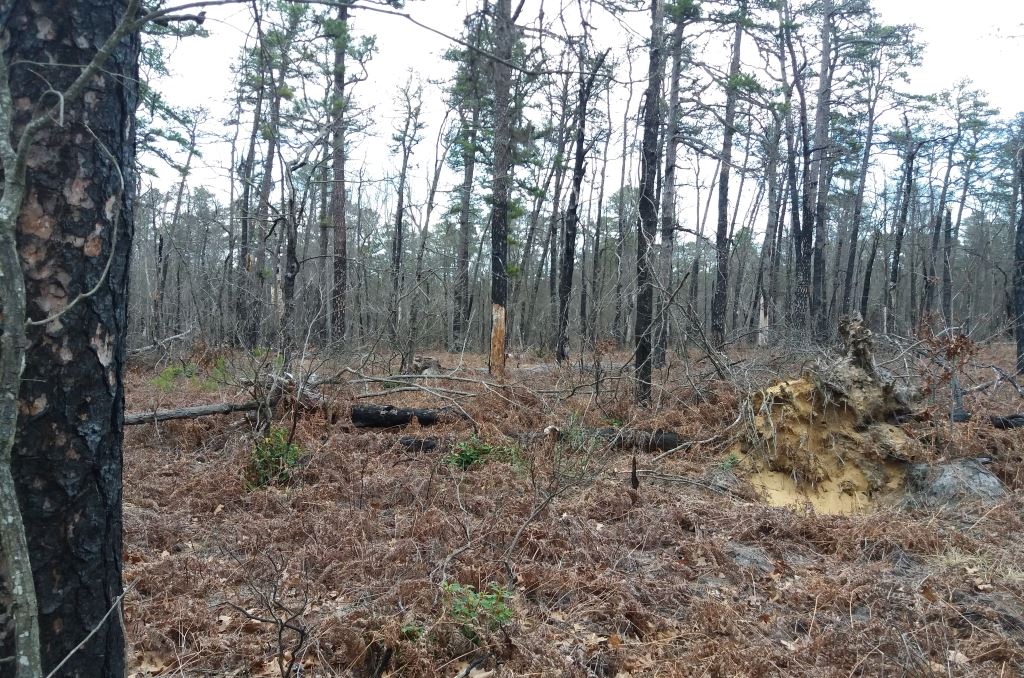 I found the tracks again and started my way toward the Mullica. 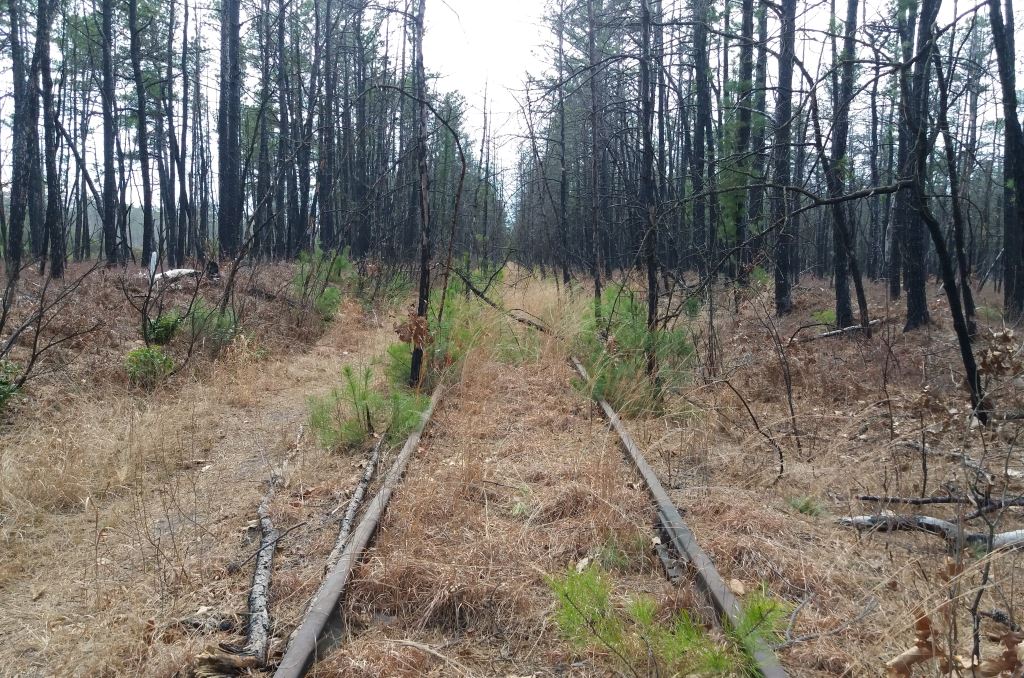 It had been quite a while since I’d been back there, but I’m pretty sure that the last time I tried this, there was contiguous land between Atsion and the river. 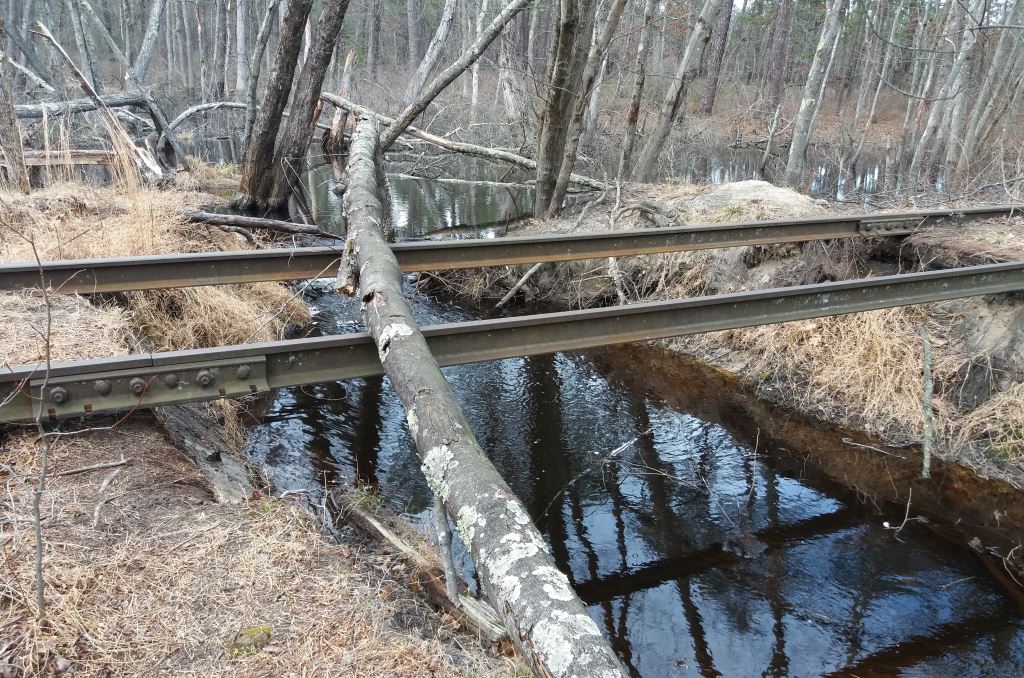 Less than a mile in, the track bed was noticeably missing. I wonder if this is the same thing that happened on August 19, 1939, when the Blue Comet derailed a few miles up these tracks near Chatsworth after heavy rains had undermined the roadbed.

I certainly wasn’t going to tightrope down the rail, especially with a fallen tree in the way. I could have walked further to right and jumped it where the creek narrowed, but the weather seemed to be getting worse and I didn’t really feel like risking it, so I turned around and went back to my car.

So, while the hiking part may have been a disappointment, I did get to spend some time in the woods, and learned a little bit about the network of white sand roads that connect the familiar parts of the Pine Barrens with areas pretty close to my home. It’s always refreshing for me to get back into the Pines. In the time it took me to write this, the temperature dropped into the low 40s, so winter is back on for the moment and boat stuff will have to wait, but we’re not that far away from April now.