I get it, and tend to agree. Of course, a friend of mine had to mention that he’s more worried about 2017, which is a valid (if grim) concern. I did what I always do in times of doubt and furious contemplation: I went to the boat. Ostensibly, I was checking on the cover, although we haven’t had much in the way of snow or storms. I mostly needed a few hours out of the house, a high speed run through the pines, and some Ziggy Stardust at a volume that would drown out the spiral of negative thoughts.

Our cover was fine, but across the parking lot someone’s blue tarp had come loose. The wind was gusting to 25kts from the southwest and the tarp was making a furious racket as it endlessly flogged a neighboring boat. It was so shockingly aggressive that I honestly thought that the grommets might be eating away the other boat’s gelcoat. I tried to settle it down, but the ropes that had been holding it in place were also shredded; all that remained were individual thin fibers, making the cover difficult to handle. I decided to call the marina to get an official opinion. The marina’s owner showed up a few minutes later, got up on the boat, and balled the tarp up in the cockpit. I think we got to it before it could do any damage. 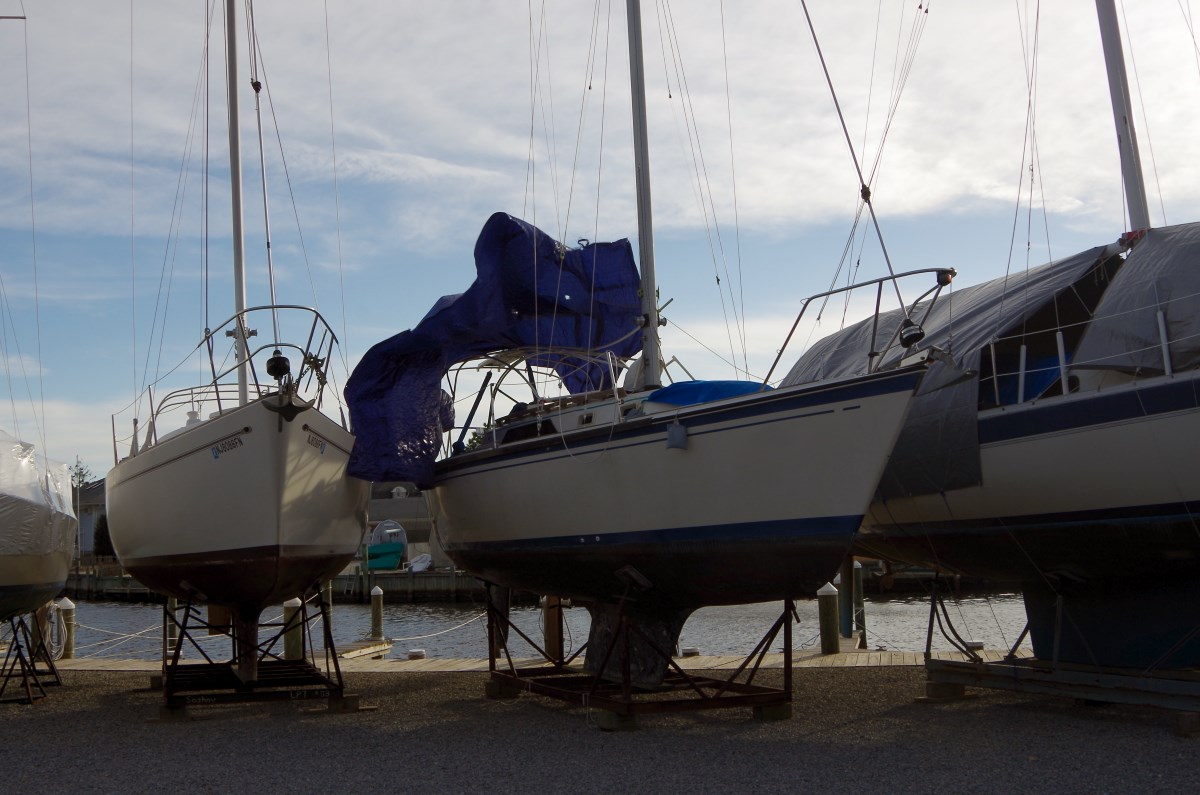 With my good deed (depending on your perspective, perhaps) out of the way, I drove out to Berkeley Island County Park to see if there was anything worth photographing. I mostly wound up running the Subaru through some mud puddles. A little mud looks good on her sometimes. I almost took a picture of the breakers crashing into the marsh near Good Luck Point, but Purple Rain was on the stereo and I didn’t want to get out of the car. I almost took a picture of the clouds over Atsion. There was a large irregular expanse of cloud that seemed to be reaching up from the pavilion with dotted cirrocumulus at high altitude behind it, and everything past noon at this time of year seems to be in some stage of sunset, but I’d just started Goodbye Yellow Brick Road. It’s a digital copy dubbed off of vinyl, and the needle had already dropped on “Funeral for a Friend,” so…

Note: Mentioning Elton John after David Bowie and Prince in a weary 2016 post makes it sound like he also died in 2016, and he did not. It’s just what I happened to be listening to at the time.

Despite the obvious lack of photography, I did conclude that there are things to look forward to, regardless of the stuff that I (or the popular vote) can’t control. The days are getting longer. We seem to keep getting better on my Tuesday night race boat, Revolution, and I heard that the skipper got a new main. It will get warmer. There will be sailing. I’m probably going to “win” the Turkey Award for crashing into another boat at the start of the Tall Oaks Challenge (I was on leeward). Yadda yadda.

I will endeavor to focus on the positive things, and with that, will wish everyone the best possible 2017.