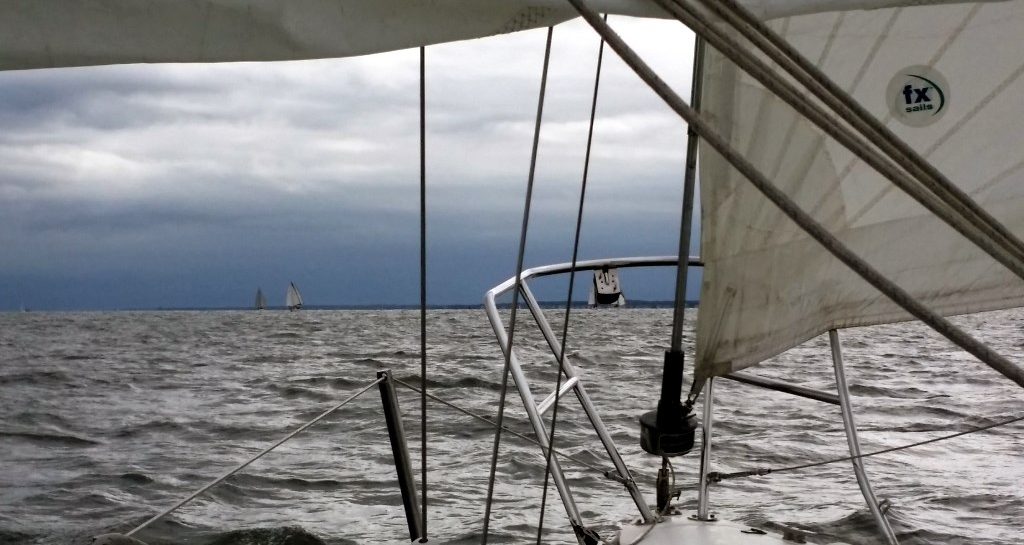 The first impact didn’t seem that bad, but when the jib backwinded and pushed us off a wave into the other boat, the whole rig shuddered.

The air had been nearly still at the marina since our arrival at the ridiculous time of 0900. The captains’ meeting at Cedar Creek had been pushed back an hour to allow time for members of the rival Tall Oaks Yacht Club to get back to their boats—a full seven-minute drive away. At 1100, I decided to shove off, without a reef in, just to kill time before the race at 1300.

The marina is well-sheltered from northerly winds, and the calm there belied the true power of the cold, dense, autumn wind, blowing mist and drizzle in our faces at over 20kts. The bay was churned up, and the only way to tell the spray from the rain was by the taste of salt.

We tucked in a reef immediately and sailed on just the main, chicken jibing slowly south as the course was set up around us. We unfurled the entire 135 fifteen minutes before the start and were immediately overpowered—I just couldn’t shake the memory of last year’s Tall Oaks Race, in which we attempted to start the race with no jib and couldn’t make enough headway to get over the starting line until eight minutes after the horn.

I don’t even know exactly what happened next. We weren’t in a great position at the start, but I thought that we could just barely lay the pin end of the starting line, until Bon Voyage, a boat from our own club, came down on us from windward. We were the stand-on boat, but I flinched and fell below the layline. We called for room and I thought for sure we’d get it. I tried to come up to make the pin, but I think we both came head to wind and lost steerage. We bumped, the boats turned, we couldn’t get the jib tacked, then we hit again, hard. Later, I would find that Bon Voyage felt it the opposite way, but maybe that’s just because we got the worst of it the second time, as our pulpit bounced off of their sturdy aluminum toe rail. Or maybe we were both freaking out and were terrible witnesses.

I checked our crew and called to the other boat to make sure everyone was ok. We came about and resumed racing, somewhat shaken.

The relentless conditions didn’t help. It was a windward-leeward course, and the first leg to windward had us standing on the opposite cockpit seats, trying to stay on the boat as she heeled and heaved. Sailor Steve fell through the companionway at one point while trying to scramble around, fortunately landing neatly on the settee. I wrestled the tiller with one hand and held the sheet in the other, ready to dump the sail if necessary, while unwittingly jabbing the Jen in the leg with every pull against the weather helm. She wanted to be anywhere else.

When we finally got to the first downwind leg, we had a pretty decent pole set, but it was demoralizing to see the larger, faster, more sea-worthy boats pack on miles as they sailed away from us. 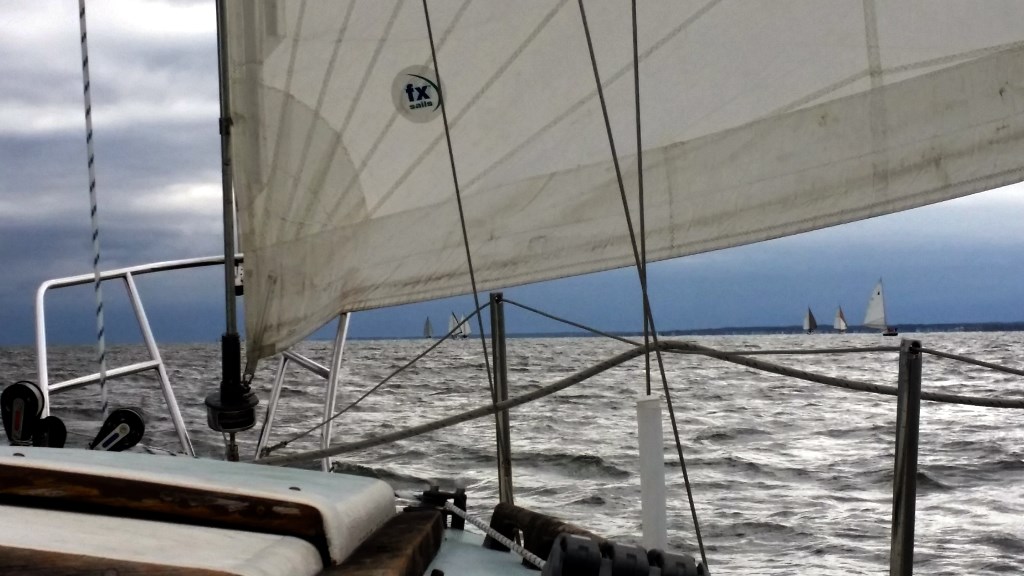 And then we had to do a second lap.

Conditions calmed down a bit over the course of the day and we continued to sail as hard as we could, but we were only able to pick off a couple other boats following our botched start. I was pretty down when we crossed the line near the trailing end of the pack.

PHRF racing does have its benefits, though. With our rating, we corrected all the way up to fourth place, and helped secure a victory for the Windjammers who will retain the Tall Oaks-Windjammers Challenge Cup for another year. In an astonishing turn, we also beat Providence II, the Sabre 36 that I used to race on, who defected to Tall Oaks.

The collision was a total drag, and at the after-party the skipper of Bon Voyage and I both spent a lot of time apologizing to each other and trying to piece together what had happened. Fortunately, no one was hurt and nothing was seriously damaged. But for all of the drama and the sensation of losing throughout the race, it turned out that we actually sailed pretty well for our boat and for the conditions, and I’m glad that we stuck it out.