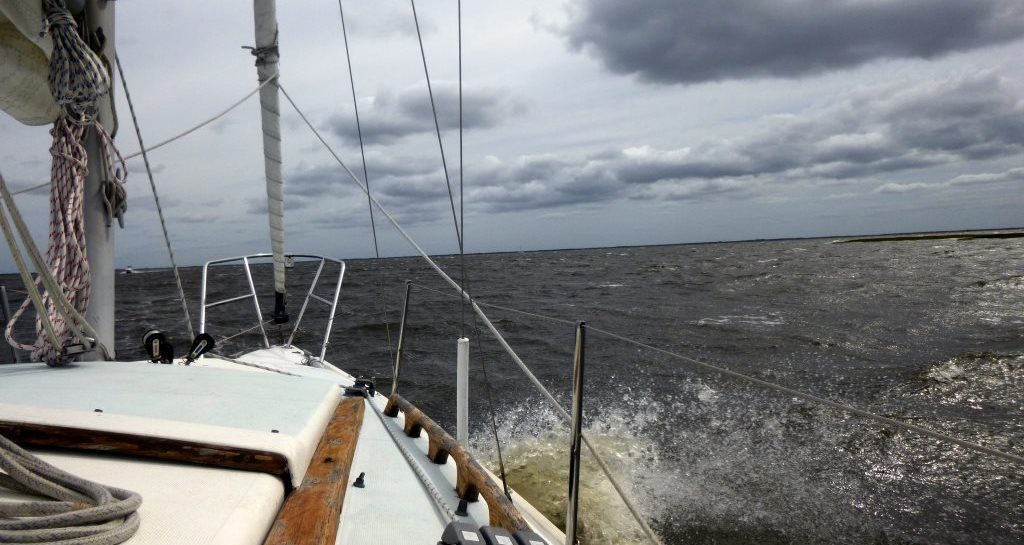 As the rival sailing clubs prepared for this year’s Tall Oaks-Windjammers Challenge Cup Race, the main concern for everyone was the weather.

The rain was supposed to stay to our south, but we were expecting overcast skies, seasonably cool temperatures, and a relatively stiff breeze.

We had to wake up crazily early to make the captains’ meeting in Forked River by 0900. The Metedeconk River Yacht Club was going to officiate this race as part of their Down Bay Invitational, but they would have been in for a rough trip and decided to invoke the clause in their Notice of Race to stay “Up Bay.” Race duties then fell to Tall Oaks, who set up a somewhat complicated course involving two laps around a triangle plus an additional windward/leeward loop with an upwind finish. After the particulars were discussed, we drove to Cedar Creek to meet up with Sailor Steve and prep the boat.

Jen was lobbying for a single reef, but we put the second reef in at the dock. I think she was immediately glad that we had two.

Greasy low-slung clouds rested on a layer somewhere between the high-altitude overcast and the waves. I don’t know the meteorological significance of that, but hopefully I’ll remember it for the future, because it was nasty out there. We were taking water over the bow while still motoring out of the creek. Sailor Steve made several costume changes before settling on wearing everything that he’d brought. I actually put my foulies on before getting soaked for once. While we were strapping into our life jackets, I decided to rally the crew with a classic pre-race pep talk, which went something like: “Look, we’re not going to win this. We’re the smallest boat out there and are at a great disadvantage in this weather. We’re going to sail conservatively. We’re going to stay on the boat and not break anything. We’re going to finish, and hope that by dumb luck we correct up past DFL.”

So I’m not Knute Rockne.

We put up the main anyway. 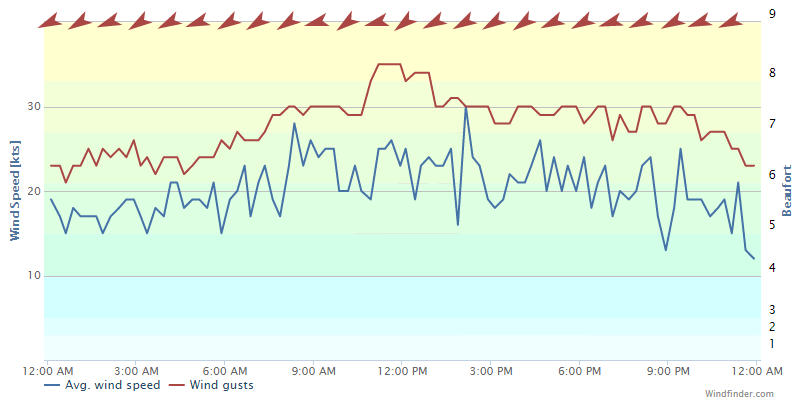 The above is the report of the observed wind at Good Luck Point, courtesy windfinder.com. It was blowing 25kts, gusting to 35 at the start. I was hoping that the wind would stay easterly enough for Island Beach to keep the waves down, but even with a short fetch the chop was hideously steep. We tried two different jib positions prior to the race, but the reefing line felt like a guitar string and I wasn’t sure if we should use it at all. We were in a pretty good position at the start, but with no jib we couldn’t point high enough to actually make it across the line. We unfurled a tiny handkerchief of genoa and crawled past the committee boat 8 minutes after the horn.

Working upwind was miserable. We could make a little headway on port tack, but not at all on starboard…I have no idea why. Either I was completely misreading things or there’s something dramatically out of tune with our rig or the waves just weren’t oriented exactly with the wind; on port we could sort of run over waves but on starboard it seemed like they were directly ahead. We’d run into a big set and get pounded to a stop, just like on the 22, then we’d have to fall off, ease the sails, and try to power up and come close hauled again. We were reasonably fast on the reaching legs, but sailing upwind was so brutal that the fleet continued to pull away from us.

Sailor Steve had been suffering with a bad back, so he was on steady mainsheet. That helped a lot with the constant need for main trimming, but left Jen basically alone on the jib sheets—in addition to her role as navigatrix. We really needed navigation because the Tall Oaks markers are the size of volleyballs, which can’t be seen from 1.2 nautical miles away under ideal conditions, much less when the waves are 6 to 8 volleyballs tall. Jen tried to log them on her telephone, but between the water on everything and the reduced touchscreen sensitivity with her waterproof case, that wasn’t really working either. Everything was difficult. Everything was wet. We got pounded. Jen was not happy.

We technically finished, or at least got close enough to the finish line that we got a horn. I was really proud of our effort under difficult circumstances. Several larger boats quit. At no point did I feel like we were overpowered or in any sort of danger—we just weren’t fast. We finished way after everyone else, although we were not scored dead last due to a technicality (the scoring of which I didn’t quite understand, even after talking to the RC at the party). I have a much better sense now of how important our jib is for upwind sailing, and we would have been more competitive with a dedicated small jib. Our overly-reefed genoa was pretty lousy, although it did get us there, eventually.

At the club level, the Windjammers had a great day, with Daylight and Sunset taking 1st and 2nd place. We had enough participation that Fortuitous’s performance could be thrown out, and the Windjammers won back the Challenge Cup from Tall Oaks. It’s a friendly rivalry and probably no one else considers this a big deal, but winning a race as a club requires a sort of demonstrable skill and cohesion that speaks to me in a way that cruising and barbecues don’t. I’m proud that the Windjammers showed some swagger and fielded so many boats on such a rough day.

Sincere thanks again to Jen and Sailor Steve for putting up with the conditions and skipper. We may have been outmatched as racers, but I think we did ok as sailors, and I think completing the course was a good learning experience.