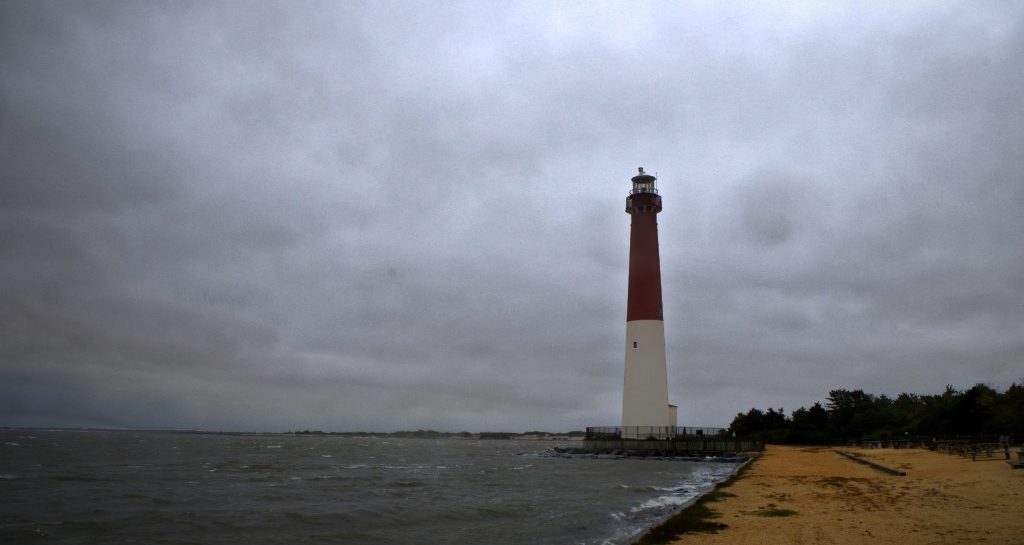 We’ve had some nasty weather in the region, and most of our allotment of boating time has been dedicated to keeping our boat safe.

We were supposed to have gale-force winds from Thursday through the weekend at the shore, and that was unrelated to any potential hurricane activity—earlier in the week, some of the models had Hurricane Joaquin making landfall in New Jersey. We went down to the shore on Wednesday night and took off all of our sails, added extra dock lines, and deployed fenders, not exactly sure what to expect. We’ve never had to deal with anything like this with a boat in a slip.

The hurricane tracked off to the east, heading out to sea, but several days of sustained high wind from the northeast caused problems at the shore with unusually high tides, flooding, and beach erosion. My main weather people have been pretty strict about not calling this storm a nor’easter, although I can’t tell if that’s because it’s not one or if Edgar Comee’s “Ad Hoc Committee for Stamping Out Nor’easter” is finally turning the tide.  Either way, it was gusting to 40kts for days and I went down on Saturday to check on Fortuitous.

She appeared to be doing well. The water was very high, but her dock lines were accommodating. I talked to Val and Ron and got some advice on how I could tie up a little better. My one concern was that it was still low tide when I arrived, and the water tends to stack up in the bay after an extended period of winds with an easterly component, so high tide could have theoretically been much higher than the usual tidal range. I decided to drive around and investigate a bit before going home so that I could come back and make sure that we were still ok at high water.

It’s easy to forget just how protected Cedar Creek Sailing Center is until you go to somewhere more exposed. While it was windy and raining in our marina, the scene at Berkeley Island Cove was far more intense. 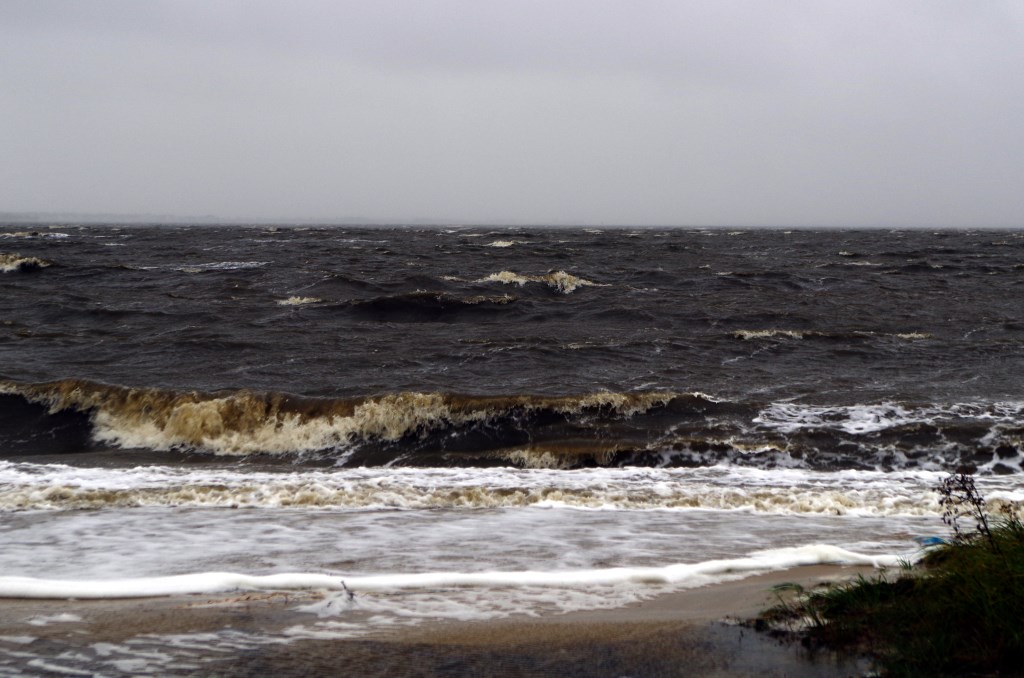 I’m not sure I’ve ever seen surf like that in the cove. It’s not very deep there and there isn’t much water to work with, although there is a lot of fetch since there’s nothing between there and Seaside to the northeast. 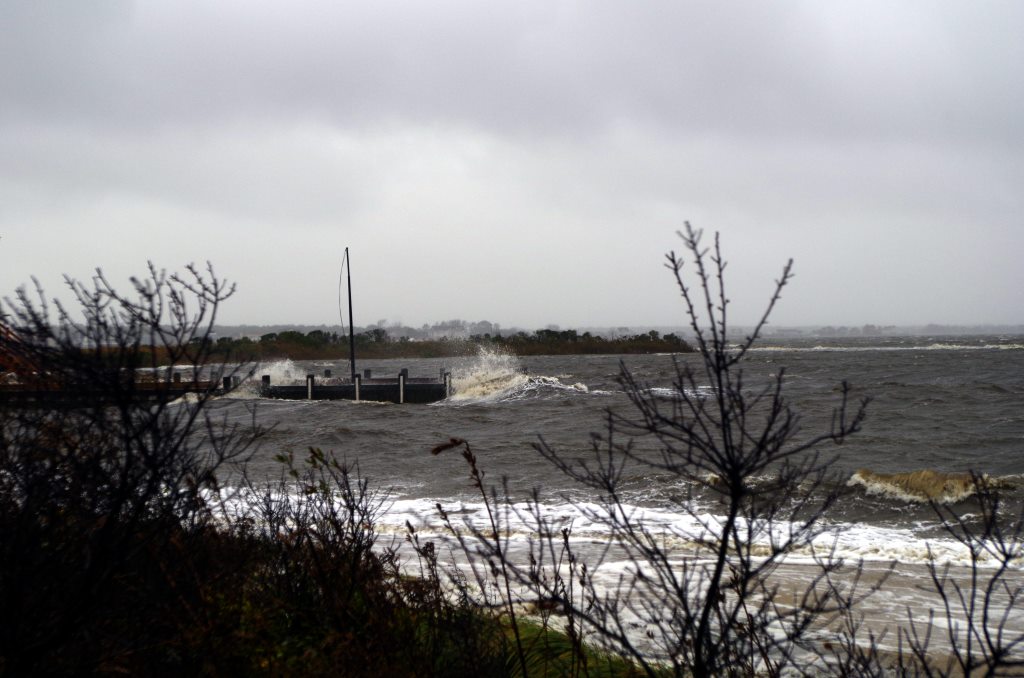 The water was covering the ramp at Trixie’s, although it looked like they did a good job of getting the boats out of the water. 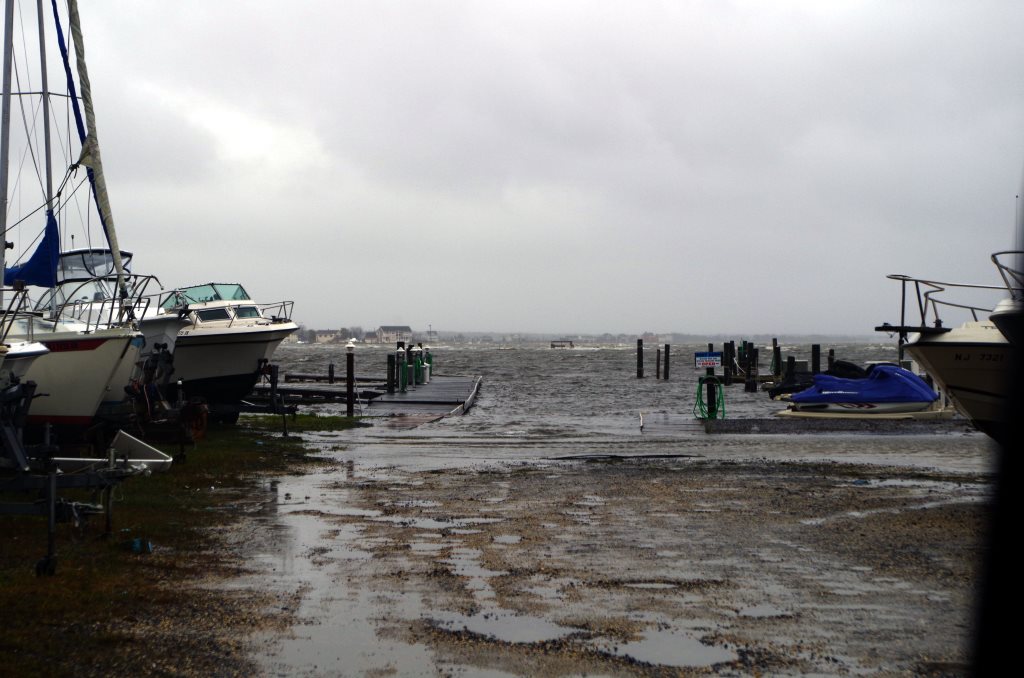 Around the corner, there were whitecaps on the marsh. This doesn’t even usually have visible water in it: 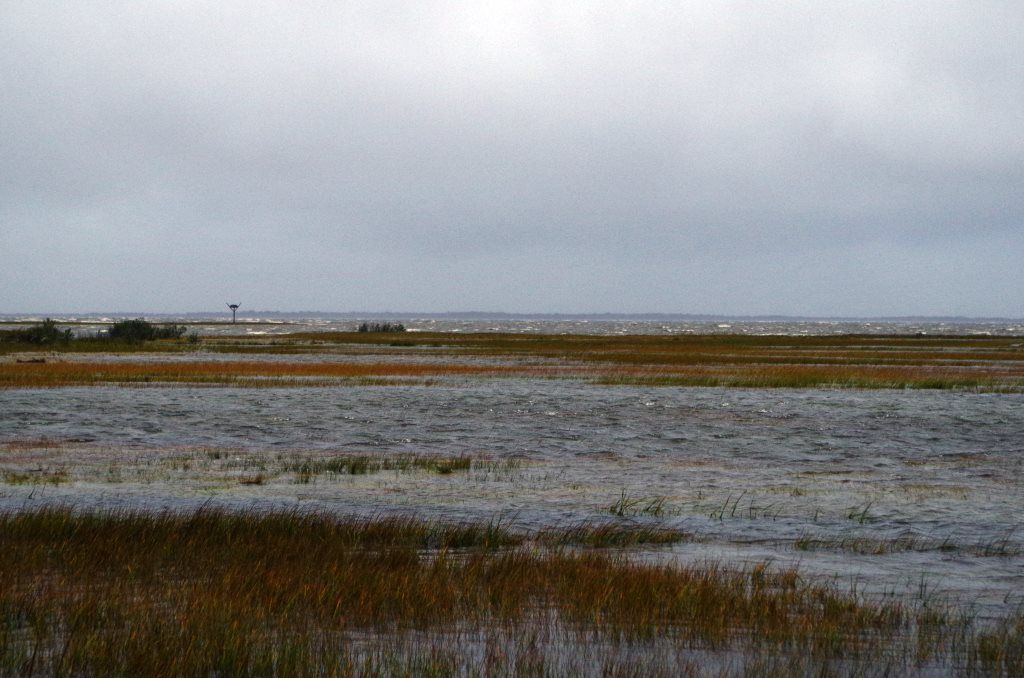 Ocean Gate and Pine Beach were getting similarly pounded, and this is just the bay, protected from the ravages of the open ocean by the barrier islands. I decided that if I was going to wait for an entire tide cycle I’d need to go somewhat farther away, and thought that I might try to go see what was happening on the ocean side. I called Island Beach State Park because I thought it might be closed, and indeed there was no answer. Maybe there’s never an answer, but I decided to instead try Long Beach Island.

There wasn’t much flooding, at least on the boulevard. With the speed limits at their winter rates, I thought that I’d drive north to the end of the island, curious to see what the inlet would look like in 40kts. Suffice it say that I was glad I wasn’t trying to run it. The pictures really fail to capture it. 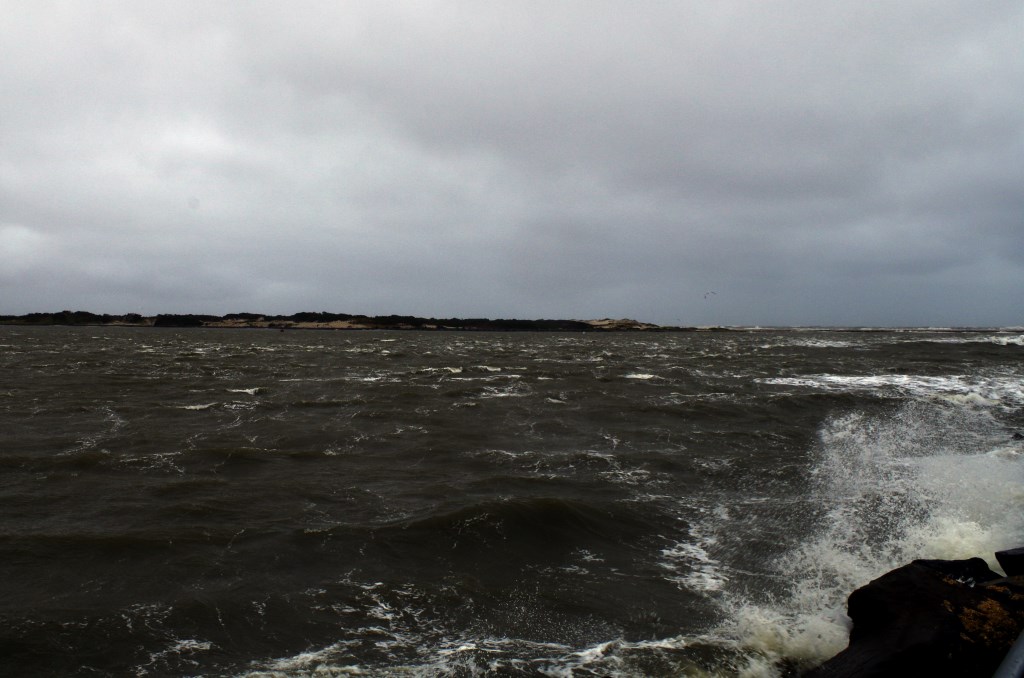 In Barnegat Lighthouse State Park, there’s a concrete walkway that goes out along the jetty, and the waves crashing into the rocks below were sending up spray twenty feet or more above the surface of the water. 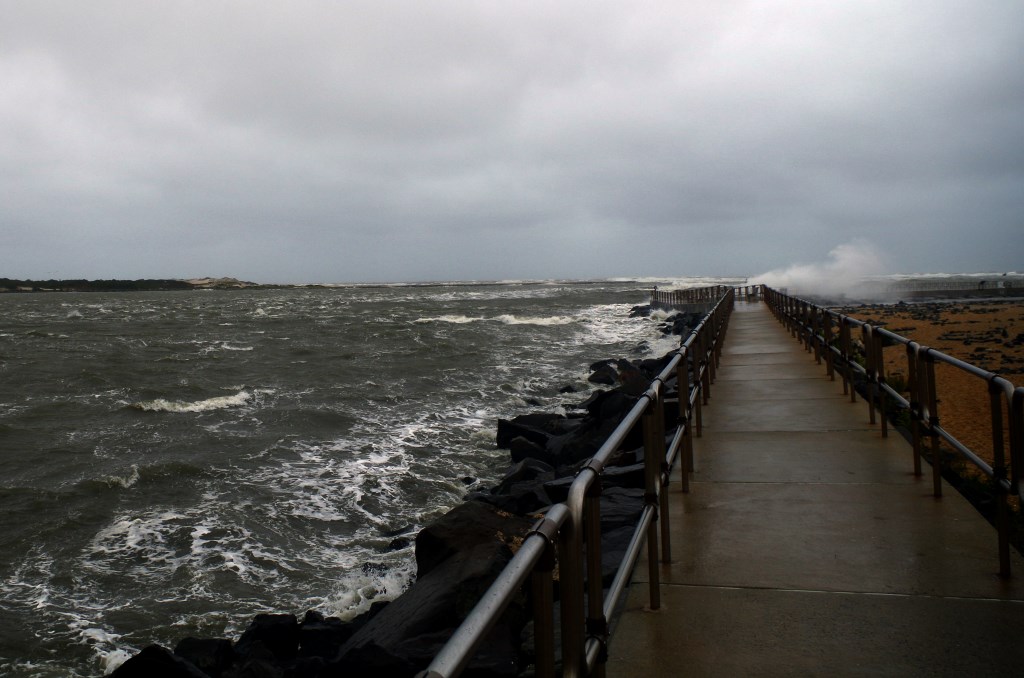 The water on the bay side was slightly calmer, although I still wouldn’t have wanted to be out in it.

Our usual anchorage across from the lighthouse looked pretty rough, and the buoys that mark the channel were listing 45º from the wind and waves. I don’t pretend to know the ways of the commercial fleet, but when driving past Viking Village, it looked to me like all the fishing boats were prudently staying in the harbor (although according to their day shapes, some of these vessels were actively engaged in trawling at the dock, which seemed spurious.) 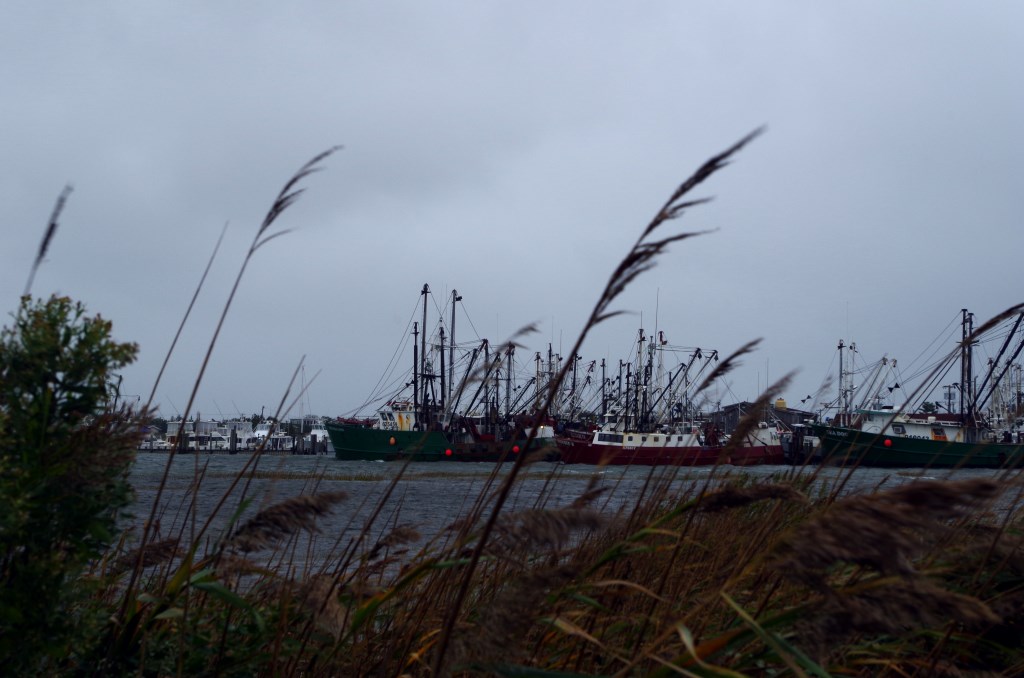 I got a coffee at a small coffee shop in Viking Village and tried to dry my camera. That was the first time that my supposed “weather resistant” DSLR had been out in actual rain, and it appears to have survived.

It was late enough that I could slowly made my way back to the mainland, where I returned to Cedar Creek. Even at high tide, Fortuitous was doing fine. 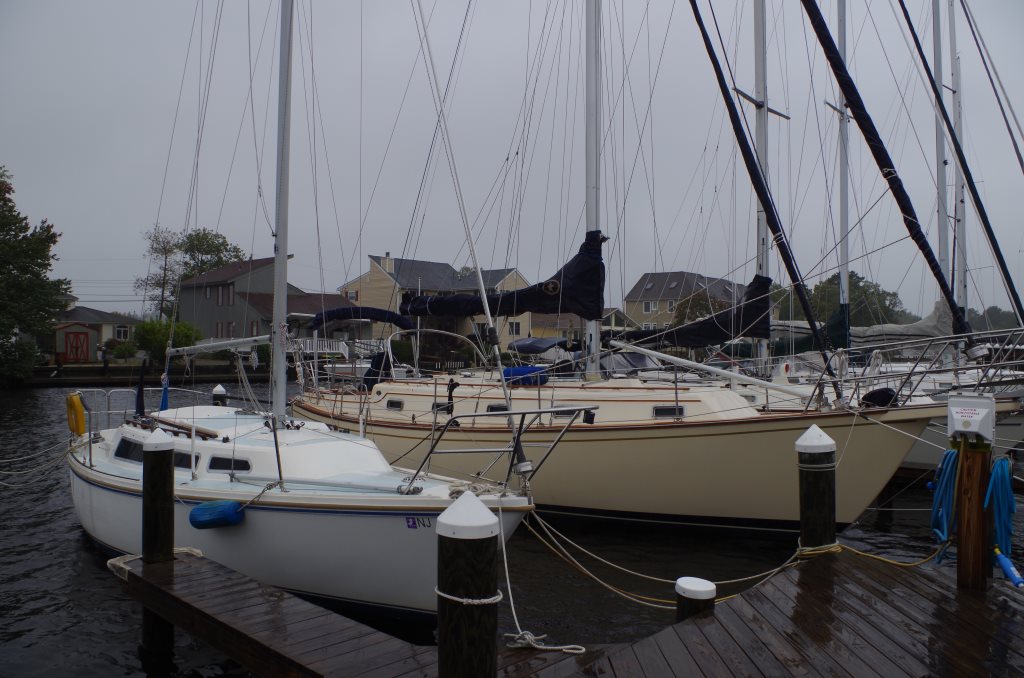 Things could have been much worse, as they are right now in South Carolina and Bermuda. Our precautions may have been overkill, but I consider it a good drill to prep the boat for storm conditions on short notice. Best wishes to all of the people who were more seriously impacted by these storms.

2 thoughts on “Battening Down the Hatches”