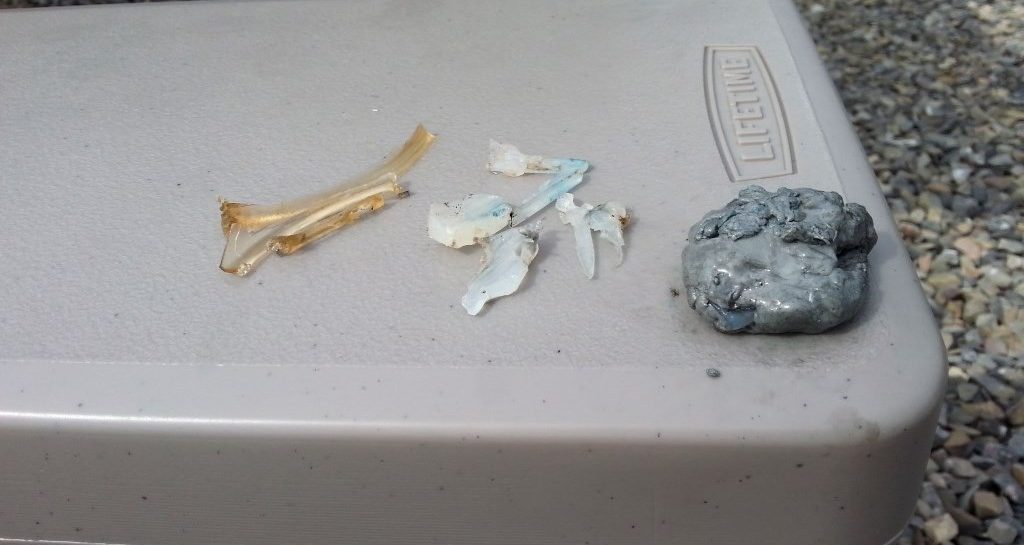 Last year, when we noticed that our portlights seemed to be actively funneling rain water into our boat rather than shunting it away, I bought the official window reseal kit from Catalina Direct. I even collected all of the tools that I thought I might need to complete the installation and packed everything into one box, ready to go. I then put that box in my basement among all the other boxes of boat stuff, like the generic crate containing the Ark of the Covenant at the end of Raiders of the Lost Ark, and promptly started wondering where all of those tools went.

Saturday was our day of reckoning and resealing.

The instructions were hazier than crazed plexi (given the depth of my vocabulary regarding portlight glazing technology) and I wasn’t sure exactly how this would go, but I hoped that we could replace all six windows so that we could be done with it in one sweeping gesture of maintenance bravado. And there’s nothing like a brief flash of optimism to remind me of why I try to keep my flashes of optimism brief.

Step 1: Remove the interior frame. Whoa, this is easy! We might be able to sail this afternoon after all…

Step 2: Remove the windows. The earth’s rotation grinds to a halt and time stops. Every object in the tool bag becomes a makeshift pry bar or poorly-honed edged weapon. The concept of finesse evaporates; there is only the decreasingly judicious use of force. What’s the proper solvent for an unknown sealant? All of them. None of them.

Every window on the port side was held in with different stuff. Behind portlight #1, we had poly-something. Portlight #2 was silicone. My personal favorite, Portlight #3, had a “just right” mélange of butyl tape, silicone, and some kind of brown mess that I fear may have been Gorilla Glue. Whatever it was, it had run all over the place, with the drips and sags preserved as a testament to the futility of improper repairs.

The butyl in the above photo is somewhat melted from the naphtha. The silicone is tinted blue because the DeBond melted one of the blue screwdrivers that I was using as a terribly inefficient chisel. This is the same screwdriver that I gouged into the palm of my hand earlier (the inherent peril of using a screwdriver as a chisel.) The Band-Aid wouldn’t stick, but we were too far in so I secured it with duct tape. This not only kept the blood off the hardware, but buoyed my spirits a bit, lending a slight Imperator Furiosa vibe to the proceedings. 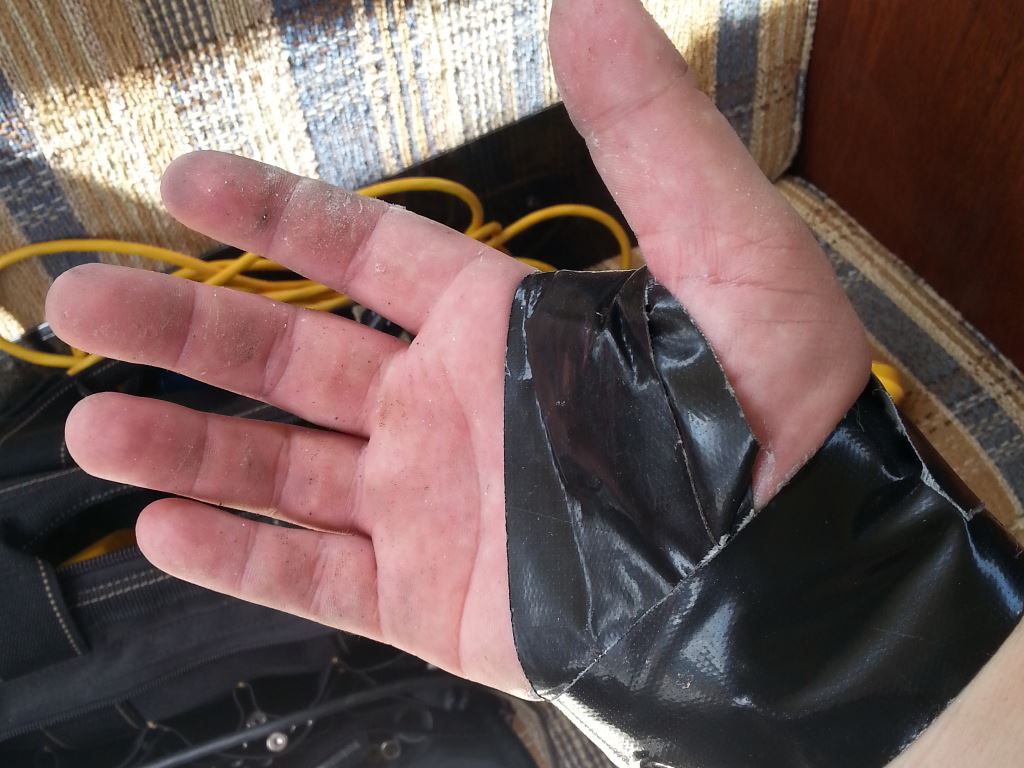 I later jettisoned that screwdriver over the side. I wish it was because I was angry with it and wanted to teach it a lesson, but it was just that I had a terrible case of tape hand.

As annoying as it was, Jen and I did manage to get the port-side windows out without further injuring ourselves or each other. Once they were out of the boat, we took the frames down to their principal parts, discarded the old rubber gaskets that held the glass in the frame, and meticulously removed all of the of the residual adhesive from the aluminum. Given the time it took to do so, we gave up on the starboard portlights for the day.

Step 3: Apply new goop. Tensions were high in this phase as we raced against both the open time of the product and the setting sun. It was not clear who was better at holding the half-glued floppy contraptions together and who was better at administering the silicone and polysulfide, but we eventually worked into a rhythm and got it done. We omitted all of the careful warnings about marking and masking, which made the cleanup of the squeeze-out fussy, but perhaps faster overall. 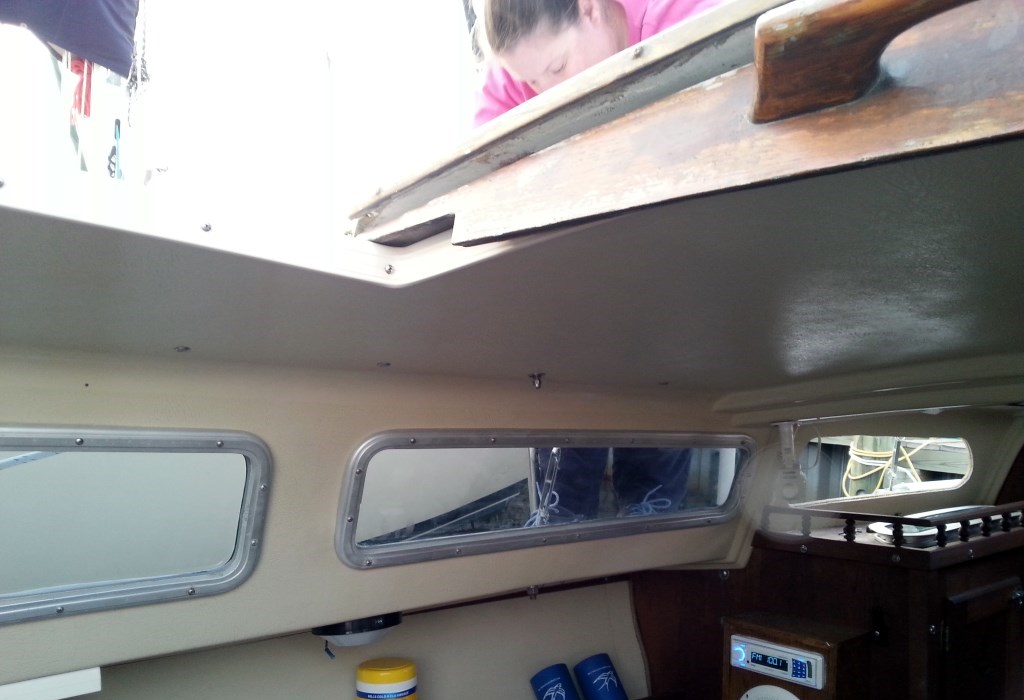 We had prepared to stay on the boat overnight, but with the solvents and adhesives off-gassing in there, we elected to just head home. It was dark and we’d worked straight through lunch and dinner—ten hours in all. We crawled into bed.

On Sunday, I got up early to buy more screwdrivers. We went back to the boat and I torqued everything down while Jen prepped the boat for sailing. There is a maximum amount of maintenance that we can endure without the reward of actually using the boat for its intended purpose.

The wind was from the nor’east, which is fairly unusual and didn’t leave us many options for our typical daysailing approach of beating upwind and returning downwind. We headed south on a broad reach and hunted down an O’Day 28 for sport. 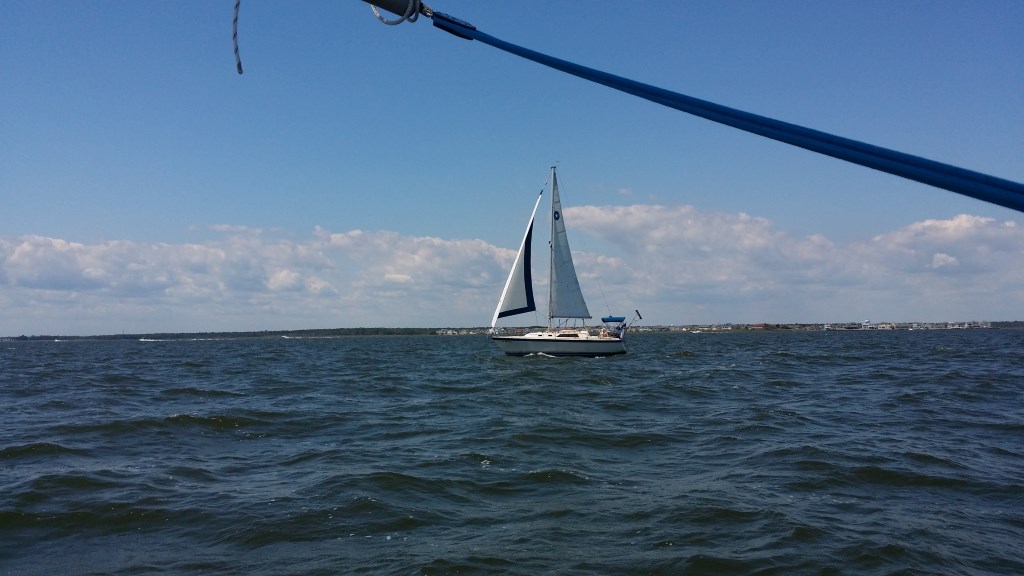 I wanted to head off on a broader reach, so we rigged the whisker pole, which was probably superfluous but good practice. Around BI, we saw Elenora coming the other way, heeled way over but sailing fast under her enormous main. 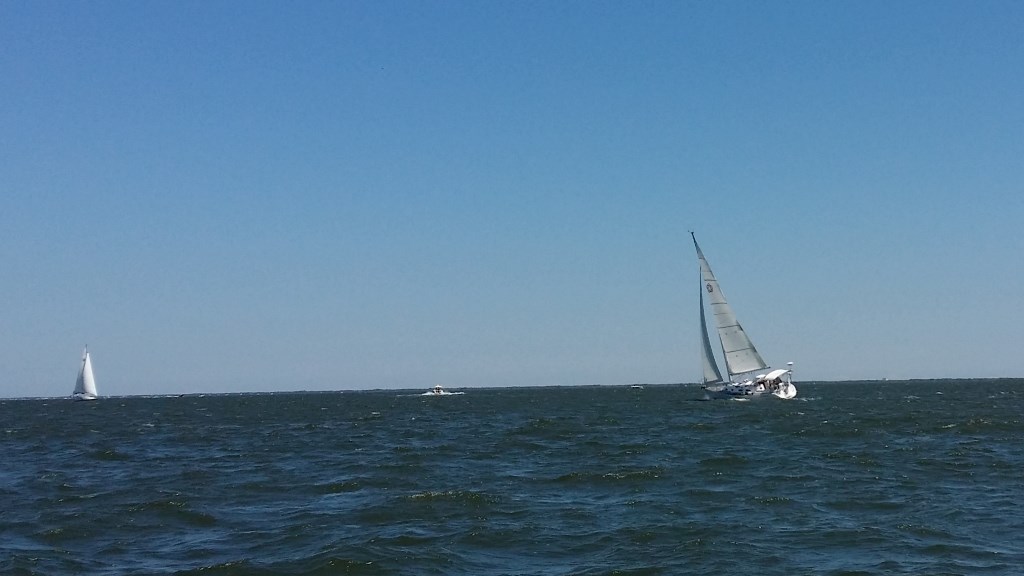 We came about near Conklin Island and started beating back. The wind was around 15kts, and although we could have kept going as we were, in the interest of comfort we elected to tuck in a reef. There wasn’t much traffic in the wide part of the southern end of the bay, so we heaved-to, which made it surprisingly easy to reef down. It’s probably not how I’d do it in 30kts (and hopefully I’d already be reefed down by then), but it’s nice to know that it’s possible despite the side load on the slugs and the fact that the main has to be drawing for the boat to stay heaved-to.

We couldn’t quite point high enough to make it straight back up the bay and had to throw in a few tacks to the east. There were a lot of long upwind legs though with a good bit of heel on. With the full jib and one reef in the main, the weather helm was light and it was a fun bash north. At one point, we [literally] crossed paths with the O’Day that we’d passed earlier. They (on port tack) cut it a little too close when trying to pass in front of us (on starboard). I’m not sure if they just headed up and luffed or if they tried to execute a tack well after it was too late, but they stopped right in front of us and I had to duck them to avoid a ramming situation. It wasn’t enough to make us spill our drinks or anything, just a little unusual.

We continued past the creek and up to 39 before turning around and making our way back to our home port. 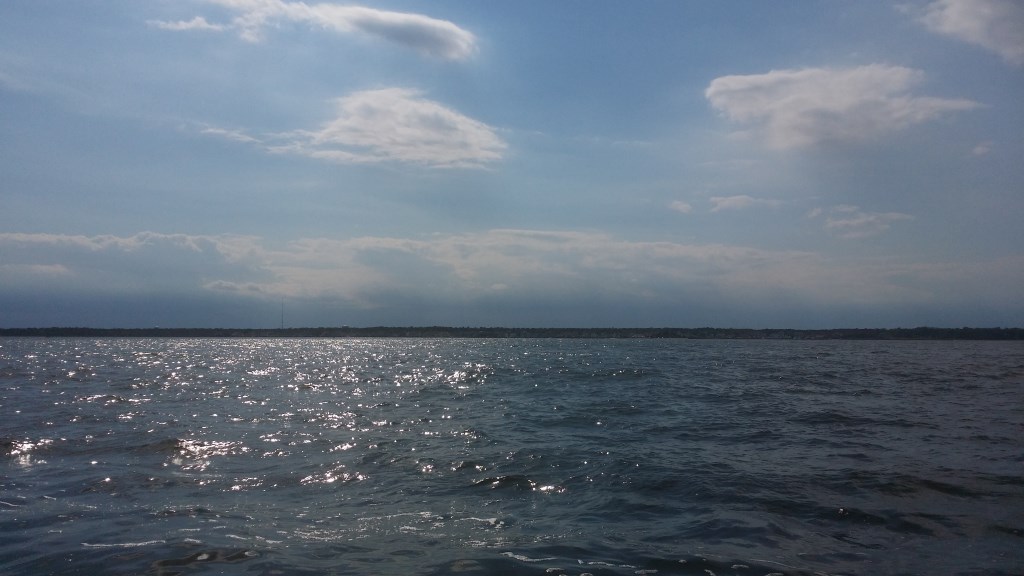 While it wasn’t the most exciting sailing weekend ever, it feels good to check off some long-standing maintenance goals. Hopefully our fix worked…I didn’t have the gumption to test the port side with less than 24 hours on the adhesive. It can’t be much worse than it was. There are also still three portlights to go, and for all I know they’re held in with Krazy Glue, epoxy, and paste that a kindergartener threw up, but I’m confident that we can figure it out now that we understand their internal workings. There are positives in both pride of ownership and in actually getting out there and sailing, and hopefully we can continue to work toward an equitable balance.