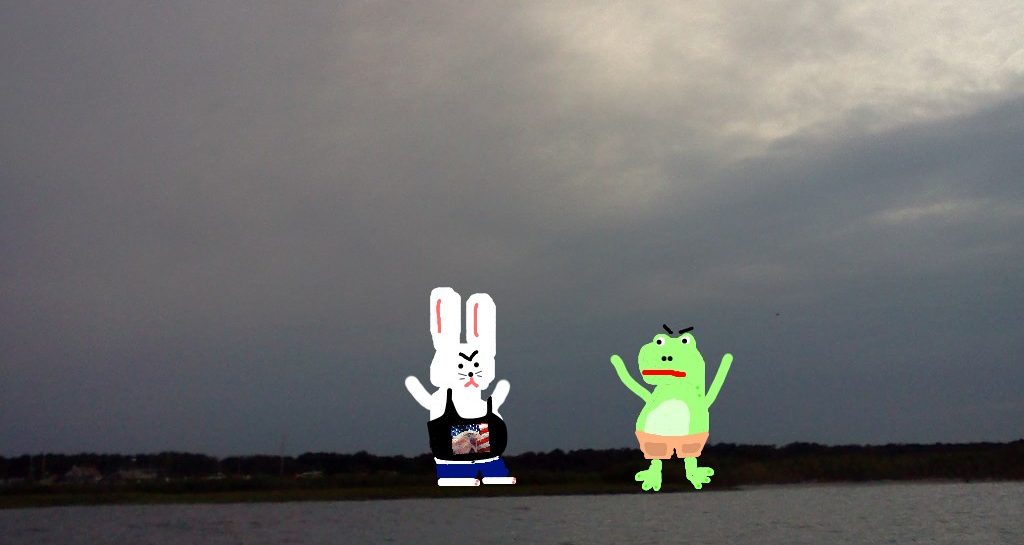 Well, except for the sunny part.

Before getting to the boat, we stopped by Cedar Creek to pick up some supplies. I finally got the elusive Selden grease for our Furlex Furler, which should hopefully allow it to deploy a little more smoothly, and Jen picked up a Windjammers hat. She can now retire the overtly land-based freebie Toyota hat that came with her car. More importantly, we had about four separate normal interactions with fully-functional people, which contrasted sharply with the rest of the day.

As we approached our marina, which is right around the corner, I asked out loud if there was something going on. There were trailers lining the road in front of the park and there was a truck with a powerboat on a trailer that was just stopped in front of Trixie’s with its hazard lights on. I slowed to see why the driver was making himself a hazard, but there wasn’t any obvious reason. His manhood extension of a truck seemed operational, with the Power Stroke diesel hocking up plenty of quality smoke, so I crept around him and pulled into the parking lot.

Jen jumped out and started prepping the boat while I went to check the wind meter. By the time I got back, there was a Jeep on the ramp launching some other obnoxious powerboat and its owner was engaged in some pre-fight verbal gymnastics with the hillbilly hazard from the street.

I often think back to those intro to psych classes where they stage a surprise robbery and make everyone fill out fake police reports to demonstrate how poorly people actually remember events in stressful situations, but irrespective of any particular reality I’m going to say that hillbilly hazard was wearing an American flag do-rag with a black wife-beater with some kind of aggressively patriotic symbol on it, like an eagle with superimposed US flag colors or some confusing idiocy like a Confederate flag with the text of the 2nd Amendment. For convenience, let’s call this guy Fuzzy Bunny.

I didn’t get a real good look at the other guy (let’s call him Mr. Frog). I might be conflating this with a different natural-born winner who was milling about, but for the purpose of this story he was wearing only cargo shorts, exposing a full-scale back tattoo of a dream catcher with a “photo realistic” wolf in the center and “In loving memory, Mom” on top with a suspiciously short date range.

Apparently Fuzzy Bunny had been waiting in the street for some time to launch his boat. Why anyone would wait in the street is beyond me—a technique I’ve never seen attempted in three years of sailing weekends. Mr. Frog snuck in before Fuzzy Bunny had a chance to launch, which made F.B. irate. In order to speed things up, he decided to swagger over and unload a bunch of abject rage on Mr. Frog. This blog is mostly PG-13, so here’s a brief synopsis in the form of a comic book fable without a trace of a moral: 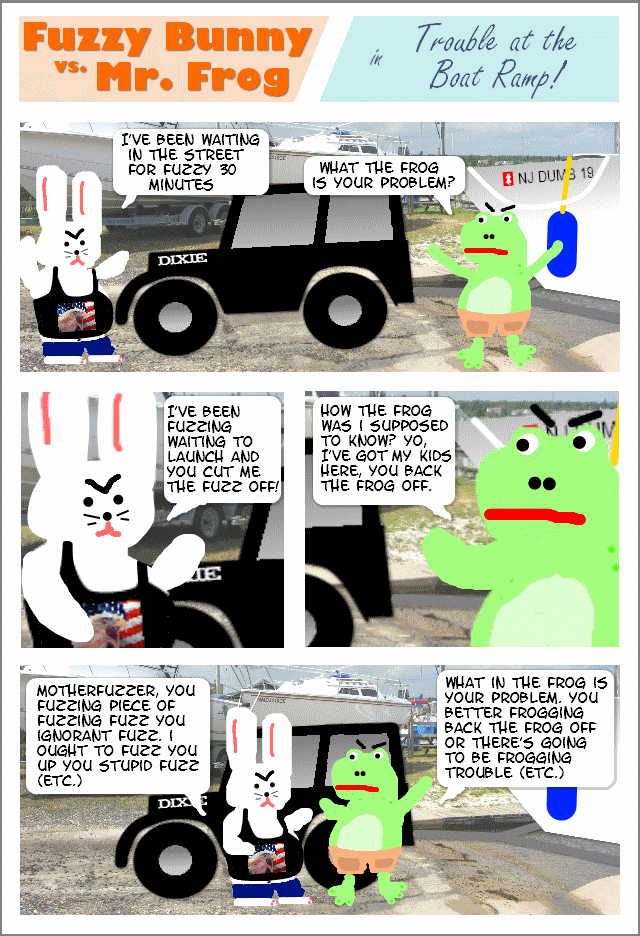 There was no fight. The best part was that even after Mr. Frog was done launching, we had to wait for Fuzzy Bunny to put his boat in, which was like watching the climax of The Miracle of Life in slow motion. His kin folk were apparently unwilling or unable to participate, and they watched with us as he performed every operation of the launch himself in a torrent of profanity and incompetence. As he walked by us to get back into Truckasaurus Wrecks, he muttered something unintelligible, like “Boy it’d a tougher to your own self.” I just stared through the space where his brain would have been, twelve miles to the horizon, until his mouth stopped moving. I guess that pissed him off too. With a sound like a school bus running open headers, he tore up the ramp, dragging a 2ft tall wall of water with him.

We launched next, and were eager to get away from the dock. Unfortunately, I was reminded that when I rinsed the boat after our last sail, I got a little overzealous with the hose and blew a bunch of grease from our wildly over-lubricated motor all over the boat, including into the cockpit. I didn’t remember this until I had already started smearing it all over the place with my bare feet and short pants. We motored over to the gas dock to assess the situation and purchase caustic cleaning chemicals.

During this time, we also attempted to fire up my new Micro Bilge Pump, based off of Giulietta’s Mini Bilge Pump design. It’s basically a windshield washer pump with a 12V adaptor and a bunch of hoses in a food storage container…what nautical project couldn’t be completed with individual trips to the auto parts store, an aquarium center, WalMart, and Radio Shack? Well, it didn’t work. It worked in my truck and emptied a glass of water in seconds, but I guess in its first moment of operation in our bilge it sucked up something that it couldn’t, in turn, blow. 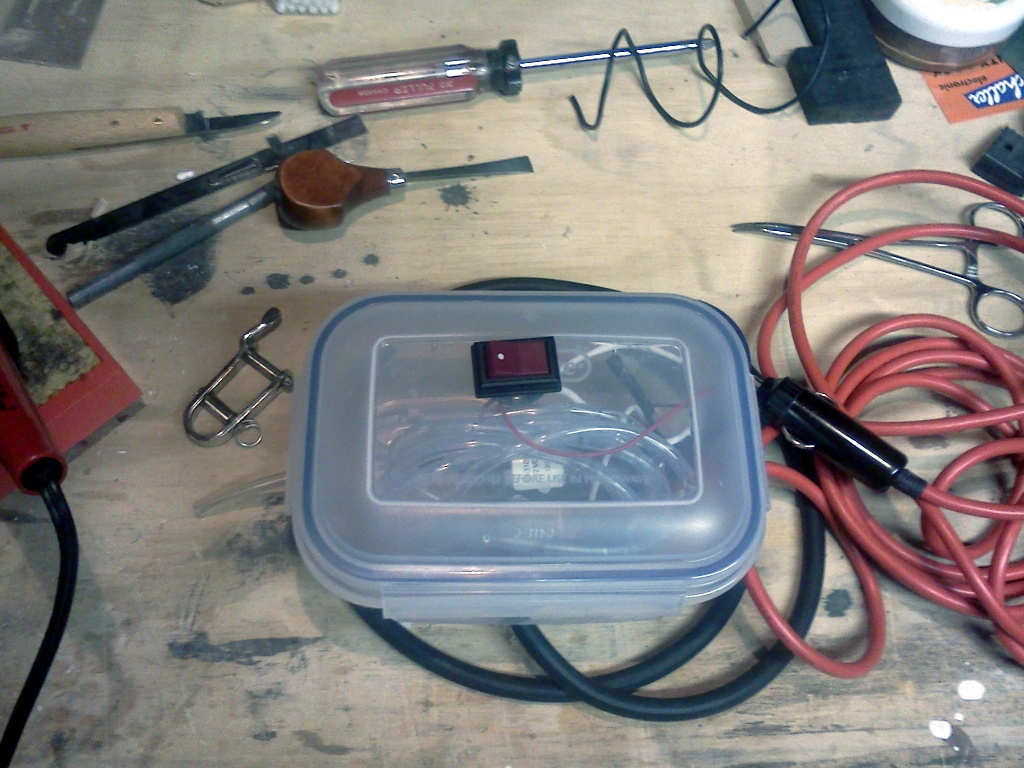 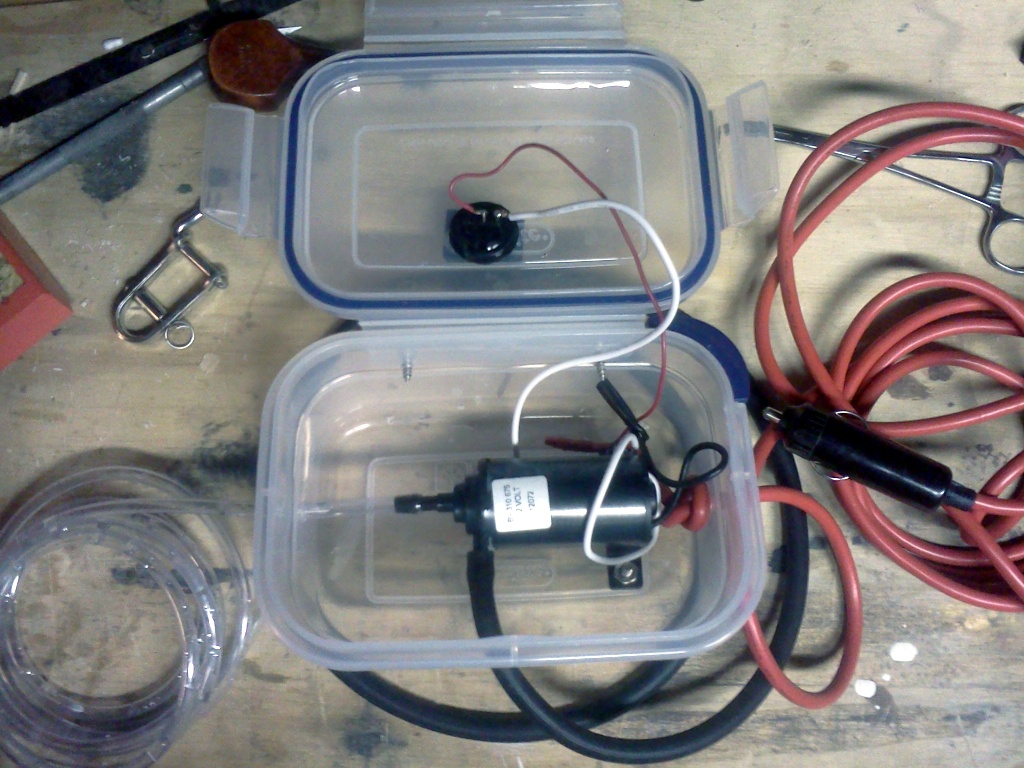 It was about this time when we also started injuring ourselves. Jen hit her head twice, once on the main hatch and once on the keel winch handle. I removed a 2×2″ patch of skin from my shin on who knows what (maybe a jib sheet winch?) when I was jumping off the boat.

We were feeling kind of low, and just wanted to get out of there, so we tidied up, took some analgesics, and ventured out for a pissy sail under a non-committal overcast. It wasn’t until we cleared the cove that I remembered that we had joker fuel. Awesome. Rather than face a return to the marina we quickly shut down the engine and half-assedly sailed north, using the part of the jib that would actually unfurl (I also forgot to lubricate the furler with the Selden grease that I’d just bought). Going to Governor’s Mansion for a swim seemed appealing but the wind would have been on our nose so we tacked around, cut our losses, and sailed back to Berkeley Island cove. We picked our way among the powerboats that were littering the anchorage and set our anchor solidly.

The day was not a total loss. We did have some relaxing time at anchor and went for a good (if chilly) swim. We didn’t drag anchor. There was enough gas in the tank to get us back to the dock. We’ll take these as minor victories. There are worse ways to spend a Sunday afternoon, but I do look forward to better sailing and human interactions in the future. I will attempt to stay positive in the mean time.

Oh, here’s a picture of the useless sun. 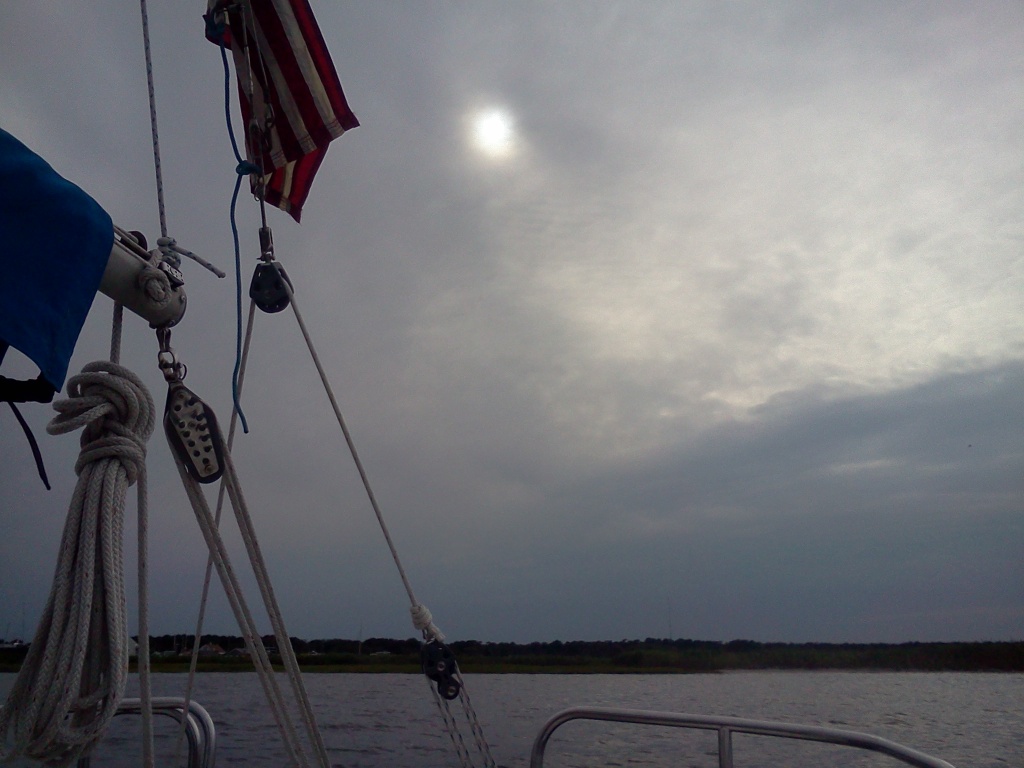 4 thoughts on “Another Sunny Day in New Jersey”