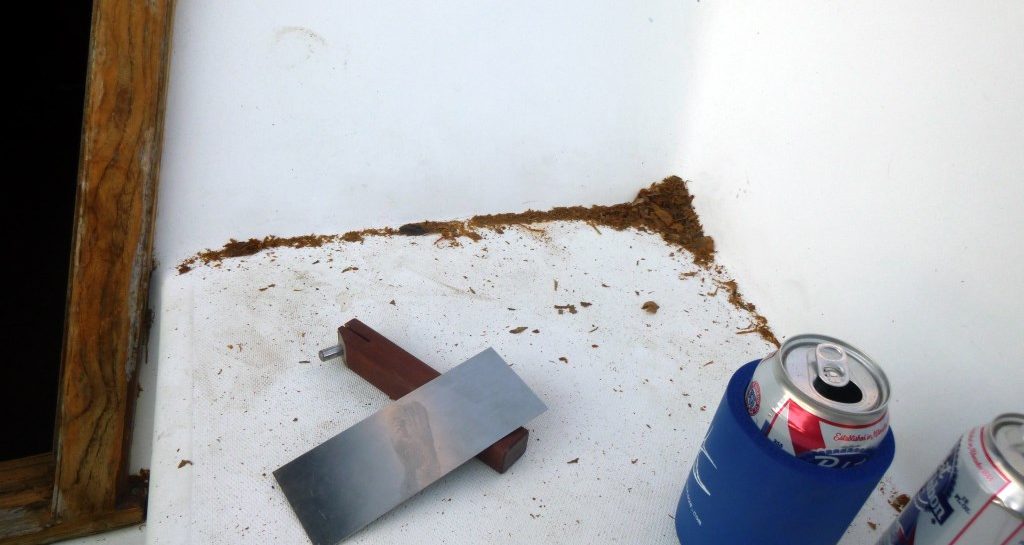 It’s been a while since we’ve made a log entry, but it’s not for lack of boat stuff.

We have a bit of a hodgepodge.

When in the midst of replacing your portlights, it’s often helpful to take on another highly annoying and time-consuming project—much like bashing your hand with a hammer to take your mind off the pain of stubbing your toe. Restoring teak is just such a task, and I decided to kick that off without a whole lot of forethought. Our teak was in sad shape. After years of neglect, some of the old-school nearly opaque Cetol was clinging on, but large areas had flaked off, allowing the teak to weather to a grim gray. Few boaters aspire to the Guernsey look, so I decided to at least get rid of the lingering Cetol.

I mostly used a heat gun and a thin-bladed putty knife that I honed like a chisel. When I could use both, it came off in sheets. Of course, some areas were less accessible (like the undersides of the hand rails). This was only Phase 1, so I mostly focused on the easy stuff, although I did additionally use a hand scraper on the wider, flatter parts to further clean them up. My hand scraper is just a card of Swiss tool steel with a little burr burnished into it. Both it and the customized putty knife are old guitar making tools…probably not textbook for boat repairs, but they worked. The teak restoration certainly isn’t complete, but it’s already one notch less embarrassing. 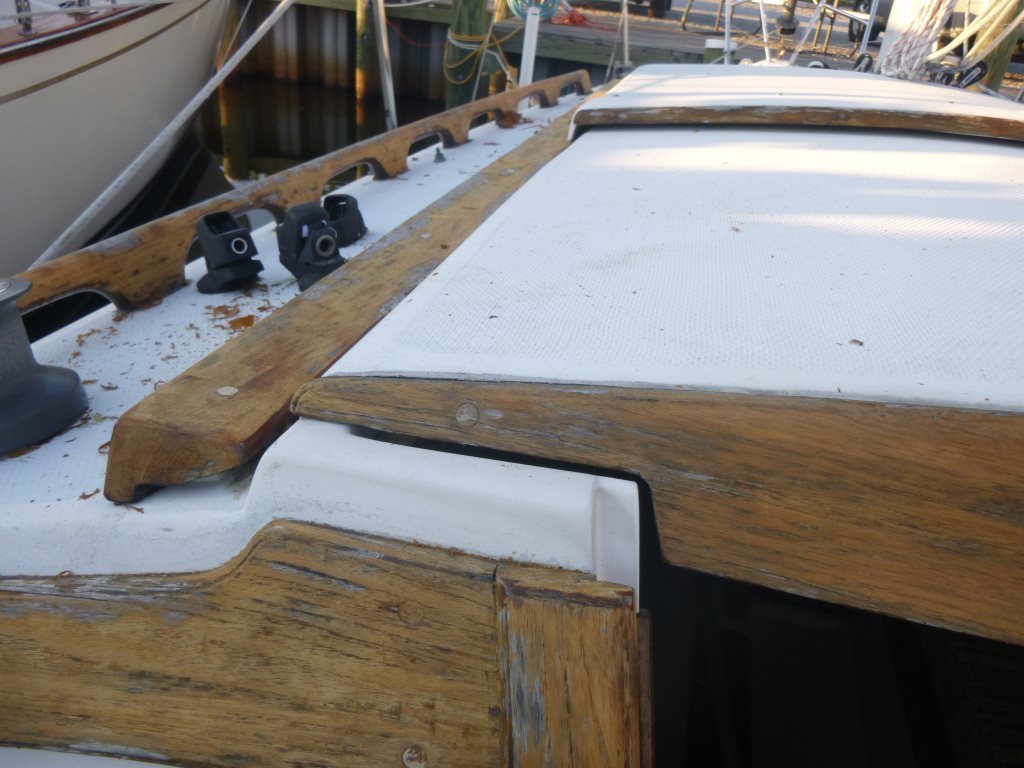 When we last messed with the portlights, we skipped our original plans to sleep on the boat after performing the maintenance…we were tired and not into the idea of sleeping in a tiny bed with weird chemicals curing over our heads. For this round, we decided that we’d sail first, sleep on the boat, then get up early and have plenty of daylight to complete the portlights—daylight was a major consideration: we almost didn’t make it last time and the days are now noticeably shorter. Of course, for our sailing day we chose one of the rare days on Barnegat Bay when there’s no wind.

We did make it to BI, which was a bit of a feat considering the lack of wind and ubiquitous powerboat wakes. We weren’t alone though…lots of sailboats were out there bobbing along with us. 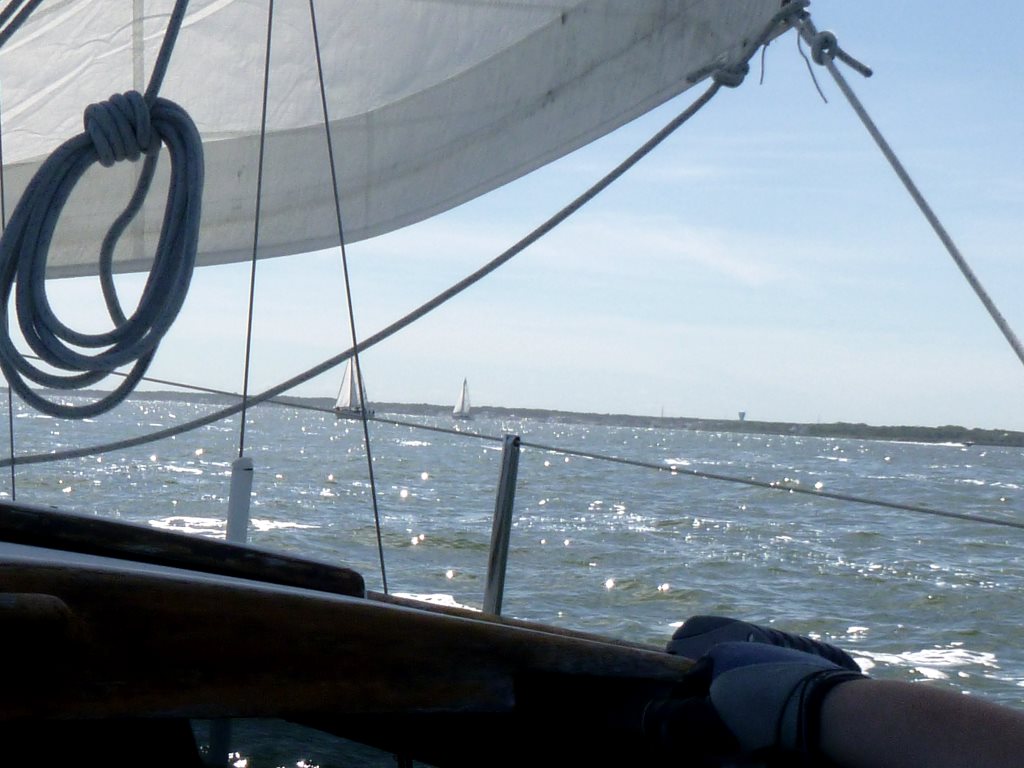 What little wind there was was nearly on the beam in both directions, so at least we had that going for us. The slow pace allowed us plenty of time to observe things. 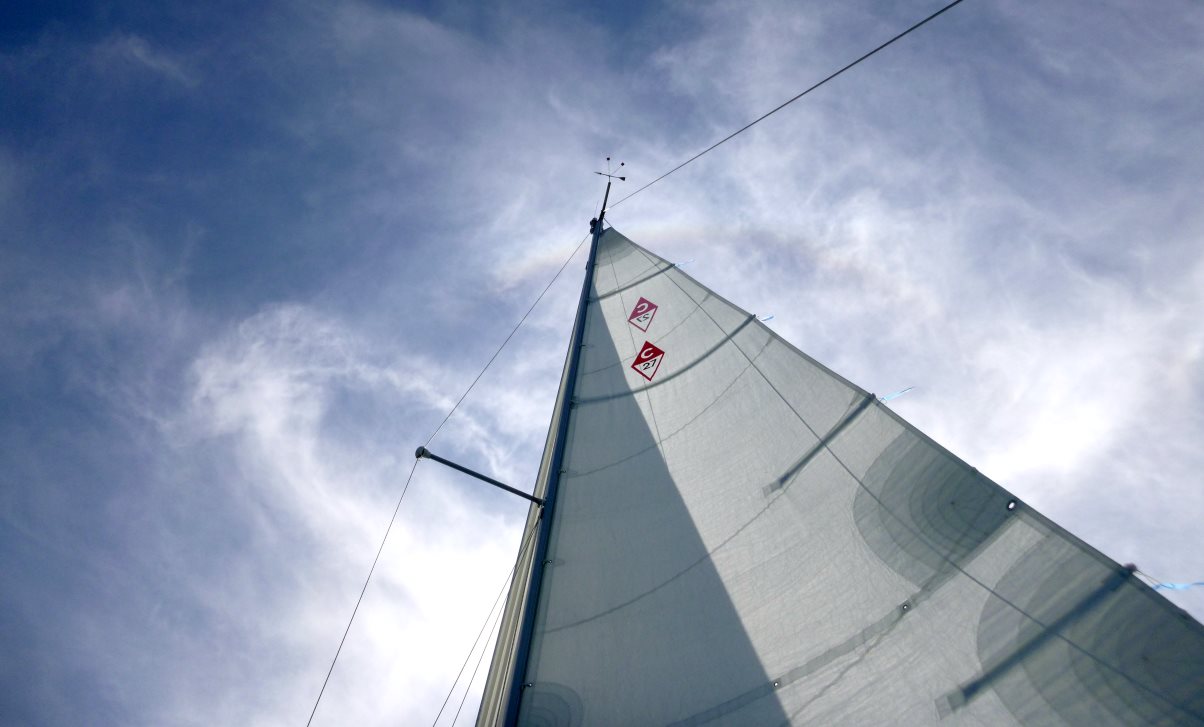 It wasn’t anything for the history books, but it was sailing. And all sailing is better than:

I covered the basics in the previous log entry, but this job is terrible. I really thought that it would go more smoothly this time. Like they said in Ghostbusters, “We have the tools, we have the talent…it’s Miller Time.” Except I always need to be reminded that when they say that in Ghostbusters, they have underestimated their opponent.

We woke up at dawn on Labor Day-proper for maximum daylight potential. This is a stupid time, and set the stage for future surliness.

The first window basically fell out when we unscrewed the inner frame. Early win.

The next window would not come out at all. We scored the caulk, saturated it with DeBond, and each of us took turns trying to force it. Eventually, I resorted to prying it out with a screwdriver, which bent the frame and removed some of the underlying gelcoat.

The marina owner suggested hammering it flat, and while I’m sure that the he could hammer it back into shape, historically my only two hammer speeds are “useless” and “destructive.” I asked instead if I could use his vice, which is the largest bench vice I’ve ever seen…like something that you could use to clamp down a lawnmower engine so that you could pound it with a maul. I taped the jaws with many layers of blue tape and carefully applied pressure to flatten out the parts of the aluminum that I’d bent. This worked shockingly well.

From there, we resumed cleaning the frames so that we could re-glaze and re-seal them.

At some point, I attempted to use the marina bathroom and found the toilet handle broken. I flushed it manually by using the internal workings in the tank and alerted the marina. I specifically mentioned that I didn’t break it, although I’m not entirely sure that they believed me.

Meanwhile, Jen felt a migraine coming on. Her doctor had conveniently cancelled her last appointment, and she had no medicine. Still, we were so far ahead of schedule that we decided to go out for lunch and take our time to soak up some air conditioning. We thought that getting out of the heat for a bit might help her. We eventually returned, and continued to prep and fit portlights.

On the last window, I ran out of sealant about half way around. This instantly put me in a panic. We couldn’t leave a gaping hole in the boat and there were very few contingencies. I made the genius decision to try to spread the existing goop around to the un-gooped side with a popsicle stick, which resulted in an incredible mess without actually moving that much caulk. Every time I touched it, it got pulled into little alpine wisps of sealant that got all over everything. If I had lightly blowtorched the peaks, it would have looked like a meringue pie.

With the clock ticking and Jen’s migraine reaching peak, we decided to install it anyway. It turned out that my light bending of the frame in the vice tweaked the overall geometry just enough that it didn’t exactly fit in the hole in the boat anymore. This had showed up in our dry run, but we were convinced that we could force it, which, of course, was before I meringued the whole thing. It was now like we were trying to stick that meringue pie into an envelope.

ABORT, ABORT, ABORT. We actually did technically get it in, after several failed attempts, but it was a nightmare. I could see the late afternoon sun’s glow around large portions of the frame, and the (insufficient) sealant was mostly in places it wasn’t supposed to be. I called the boat store—the only one that I thought might be open on Labor Day—and found that we had barely enough time to get more caulk, so we pulled the portlight, causing further mess. Jen’s headache was now at ludicrous proportions, and she was neither interested in my freaking out about the open time of marine sealants nor in cleaning yet another window (now with fresh goop), but it seemed like the only option was for me to leave immediately and try to get more stuff while she tended to the debacle at hand.

I made it to the store just in time, and they had what we needed. I decided to stop by the K-Mart next door to get more supplies. Prior to this, I would have given about fifty-fifty odds on whether or not K-Mart was still in business, and it was a pretty weird scene in there for someone who generally avoids big-box stores…20,000 square feet of store with no one in it except for one checkout person, a mother and screaming baby, and a roaming gang of teens with hula hoops. In my stupor, I decided to pick this up for Jen to lift her spirits: 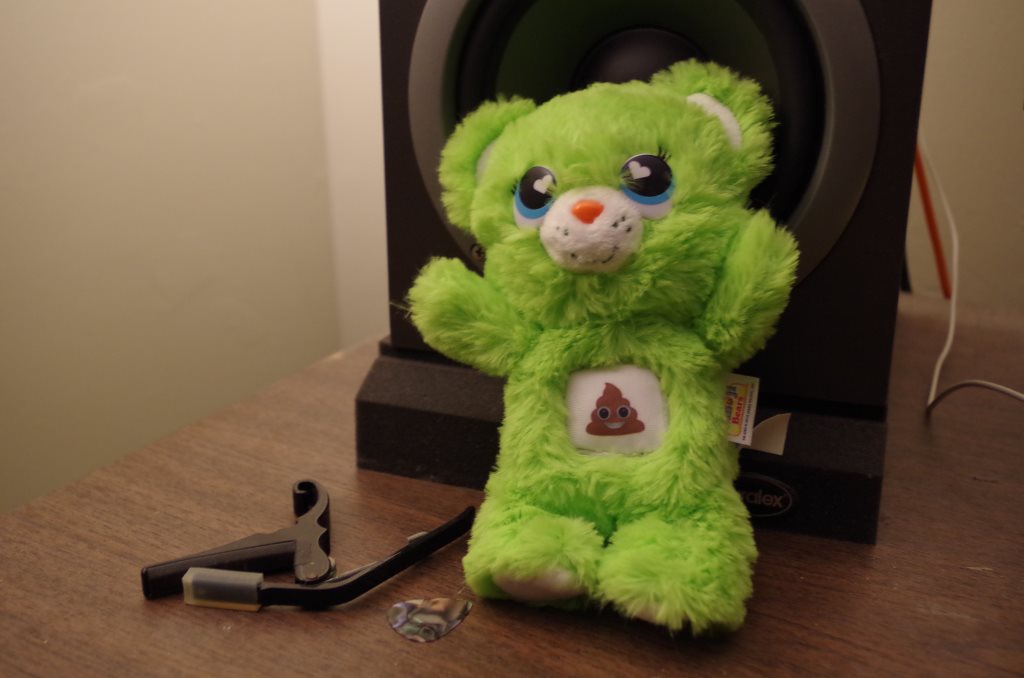 I have no idea why this exists, or what got mistranslated on that conference call to Guangdong Plush Toy Factory #4 that resulted in them putting the poop emoji on its stomach, but it seemed appropriate to our situation. I felt like I was daring the checkout dude to question what had gone wrong in my life that I needed two rolls of shop towels, a quart of mineral spirits, and a green poo bear, but nothing penetrated his torpid stare.

When I returned and presented Jen with the poop monster, she was overwhelmed. Not because my gesture was particularly touching, but because the marina toilet that I had previously “fixed” went haywire on her while I was gone, causing flooding to a depth past the soles of her shoes. She was miserable, and we were rapidly losing daylight.

I hacked away at the hole with whatever sharp or abrasive things I could find, just trying to shave off a 32nd of an inch to allow us to get the window in cleanly. After three dry runs and a frustrating conversation on window placement techniques, I applied new goo and Jen kicked the portlight home from the side deck. We hastily cleaned up and left.

Then Jen threw up in my truck. Well, not in it, entirely…we were stopped at a Wawa so that I could get some depressing dinner equivalent, and she specifically got out to hurl, but didn’t quite get it all on the outside the vehicle.

Worst time to try the new “Steakhouse Onion” flavor of Funyuns ever.

I felt terrible for her. Ordinarily, we would have been able to commiserate on how beat down we were, but she clearly had the worst of it. The damned portlights are in though. If they leak for any reason, I will be seriously entertaining ideas for Dr. Screwball’s Automatic Leak-Seeking Unction, or whatever that bearded man from the infomercials is currently yelling about (in heaven?), but I have a modicum of confidence that we did this the right way and that they’ll hold.