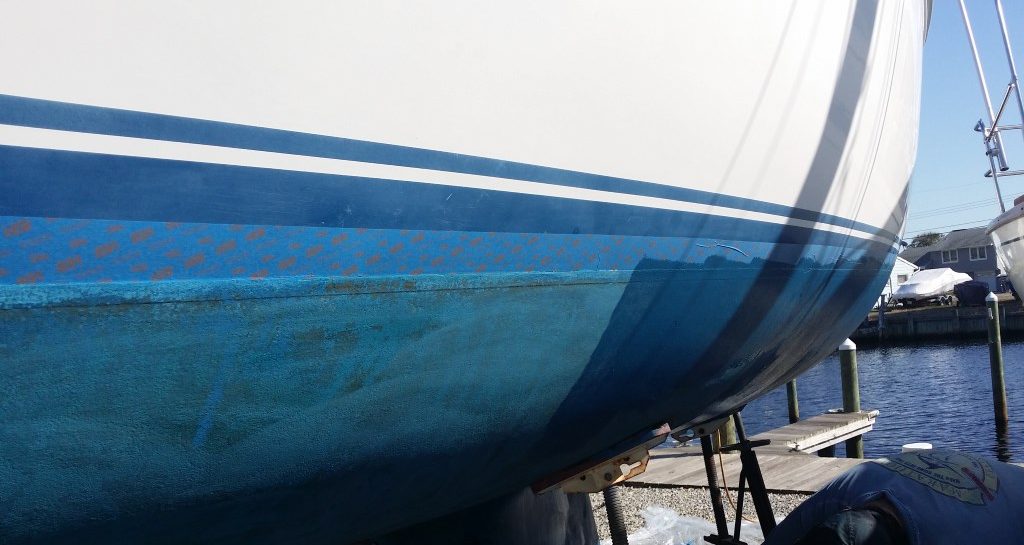 We finally got a weekend without snow, gales, freezing temperatures, plagues of locusts, etc. Time to prep the boat.

The start of last season was a relentless fiasco: our mast was resting horizontally on barrels for much of the spring, we had a new boom to configure, our bilge pump failed and we wound up re-plumbing the entire bilge system, and we had to tend to some deferred engine maintenance since we’d previously kept it on the previous owner’s spring schedule. It seemed like we’d never actually get to sail. As a result, we punted on painting the bottom and paid the marina to do it, just so it wouldn’t cost us yet another weekend.

This year, with the craziest of the crazy problems behind us, we planned to resume performing our own routine maintenance. It really didn’t seem like there was that much to do, although my time and cost estimates for boat projects are typically off by several orders of magnitude. The general idea was that we’d assess our supplies on Friday night, get up early on Saturday and get down to the shore, throw on some antifouling paint, and schedule the launch.

As it turned out, neither of us were particularly raring to go on Saturday morning. We woke up late and stomped around the house for a while before getting around to conducting the supply check that we were supposed to have done the night before. That led to multiple poorly-organized trips to home improvement megastores, including one where someone had dropped a pallet of varnish off of a forklift and taken out the entire aisle of painting accoutrements. By the time we were ready to go, it seemed like it might be too late to begin. I also realized along the way that I had not allotted any time to remove the cover, so I decided to make a solo run to the boat, get the cover off, then regroup with Jen on Sunday for bottom painting.

The cover came off smoothly, plied with only a few beers.

On Sunday, we got up nearly on time and made our way to the boat. I knew of a couple spots where the old paint was chipping, and wanted to take care of that before applying fresh antifouling, but once we got under and I started going after it with a scraper, it became immediately obvious that I’d vastly underestimated the problem (and the surface area of the boat).

The last time I dealt with bottom paint was on the 22, when I [foolishly] decided to take it down to gelcoat and start cleanly. That turned out to be a three-weekend nightmare (described here, here, and here) that turned everything in my world a powdery blue color. 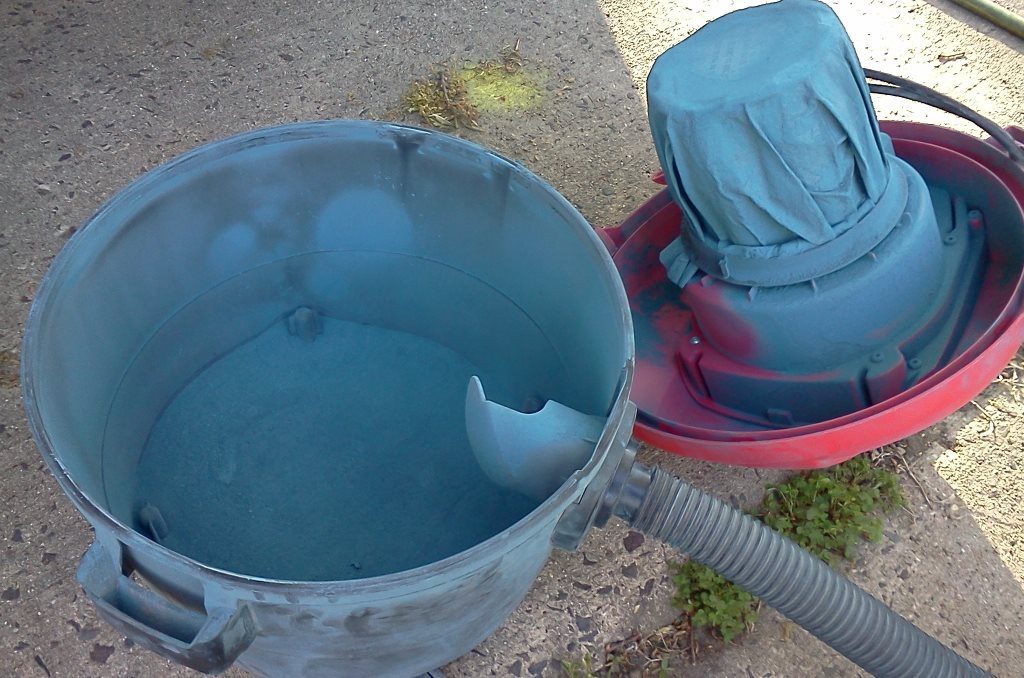 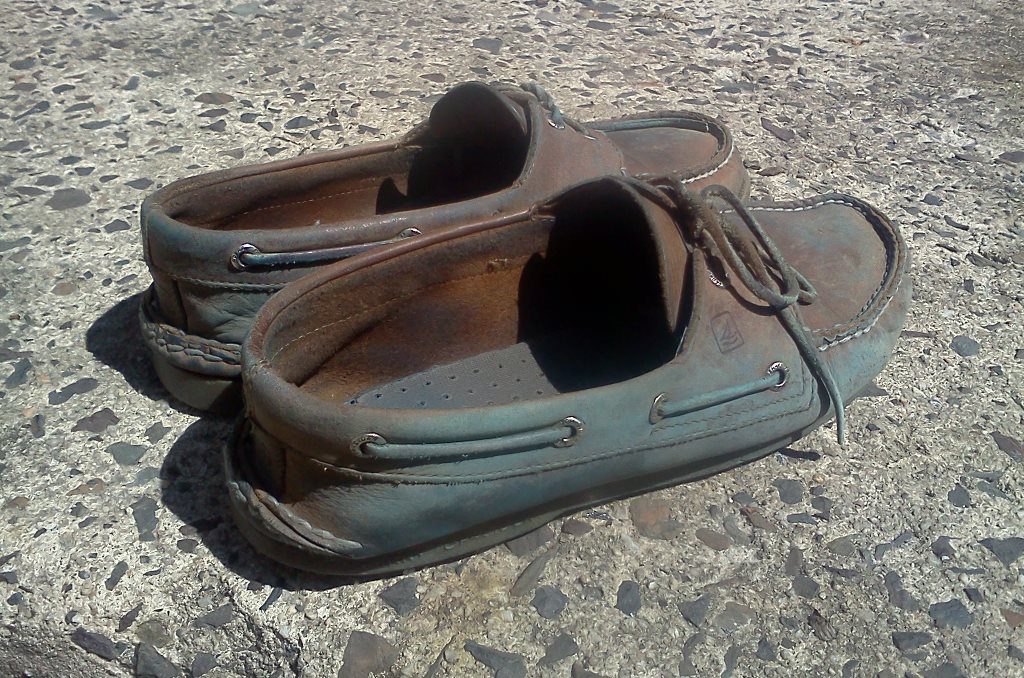 We weren’t really prepared for this go-around. I scraped and Jen hand-sanded those “couple spots” of chipped paint, which soon expanded to include the entire hull below the boot stripe. We didn’t have the palm sander, our space suits, or Ol’ Blue (the [red] quasi-decommissioned Shop Vac relegated to the most hideous sucking tasks), yet the more we touched, the more it crumbled. At one particular low point, Jen somehow managed to slow-motion somersault into the supports of the cradle, which lightly injured most of her limbs. The blue dust continued to build up on us, as if we were about to start banging on an elaborate gamelan of PVC pipes. I was concerned that I’d be writing one of those log entries where Jen and I wearily strangle each other while the moon rises over the wreckage of our latest debacle.

It’s way too early in the season for us to completely melt down though, and we powered through. We eventually got the bottom prepped to the point where we could live with it, and commenced with taping and painting.

I rollered while Jen moved the paint tray around and kept it full. This was actually the first time we’d painted a keel boat, and it was mercifully straightforward. 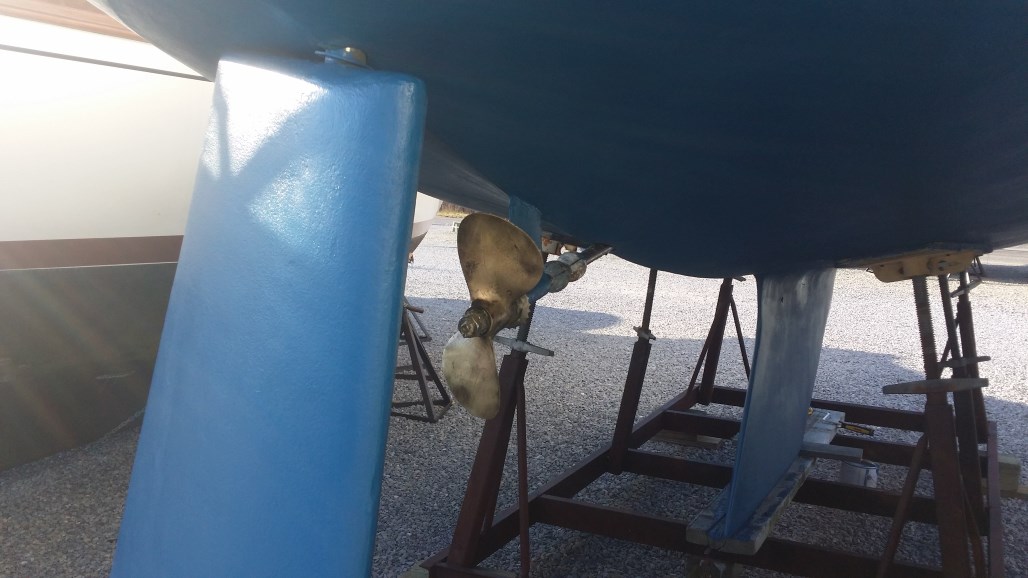 The new shade of blue looks nice, although I hope it’s underwater soon. 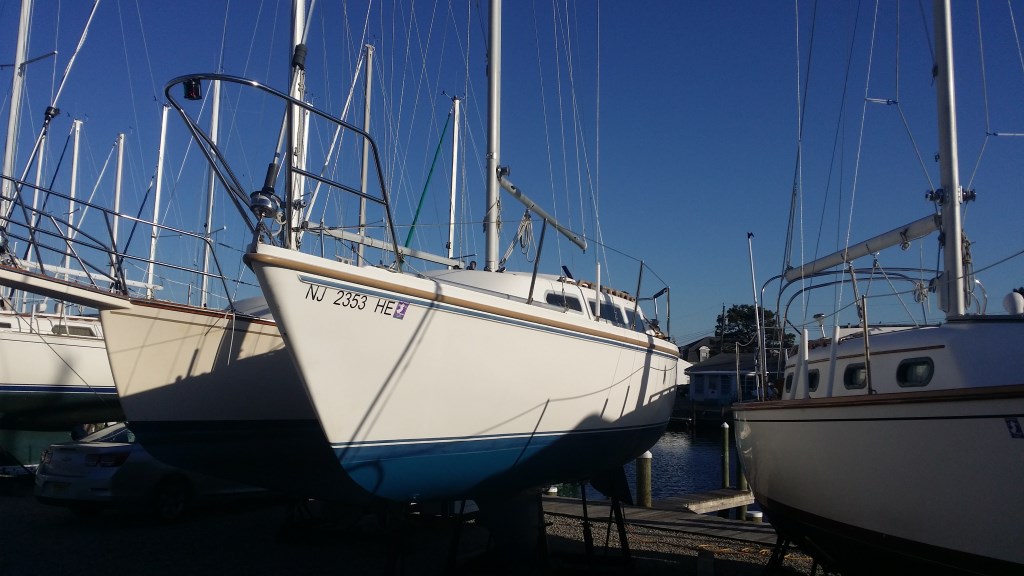 We finished with daylight to spare, and were able to clean ourselves up enough to not substantially change the interior color of my car. All in all, it really wasn’t that bad. There’s always more maintenance to do, but we should be able to take care of the rest of the essentials with the boat in the water. Here’s to hoping that we splash shortly.