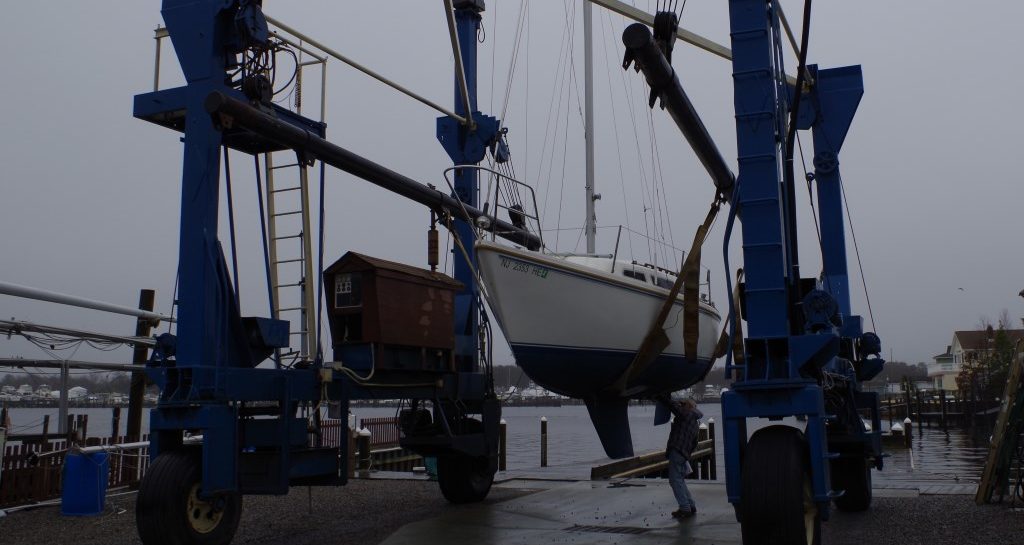 The vernal equinox has long passed us by, and it’s time to get serious about preparing the boat for the season.

I wasn’t exactly sure what to expect from this process. This is our first time prepping the 27, and it’s a very different beast from our 22. I know what the steps are, but like everything else in sailing, the book knowledge doesn’t necessarily make any sense until you do it.

Commissioning actually started last weekend, when I attempted to take our cover off by myself—under a gale warning. I figured that as a sailor, I should be able to use the wind to my advantage. After some quick imagineering, I decided that I would undo the leeward tie-downs then carefully let the windward ones go in order, allowing the cover to gently blow off the boat and practically into my truck. It wasn’t quite that smooth, but I got it done with some help from Dale, who was also in the yard messing with his boat. Dale and I have become friendly, but we’re still not exactly the Rescue Rangers. In fact, he loves to (jokingly [I think]) point out my nautical inadequacies: if I fail to tie a knot correctly on the first try or produce a line that’s not properly whipped or use a lubberly term for something, Dale always seems to appear out of nowhere to call me on it. I might not have even noticed in the midst of removing the cover, but he caught himself using “front and back” instead of “fore and aft” while he was quizzing me on the efficacy of the trucker’s hitch, which I think puts me up 1-0 for the year.

I also took some time to wander around and take pictures. You never know what you’re going to see on the peninsula. For example, I love that these sailors used Horrifying Clown™ Brand Craft Stuffing to cushion their mast: 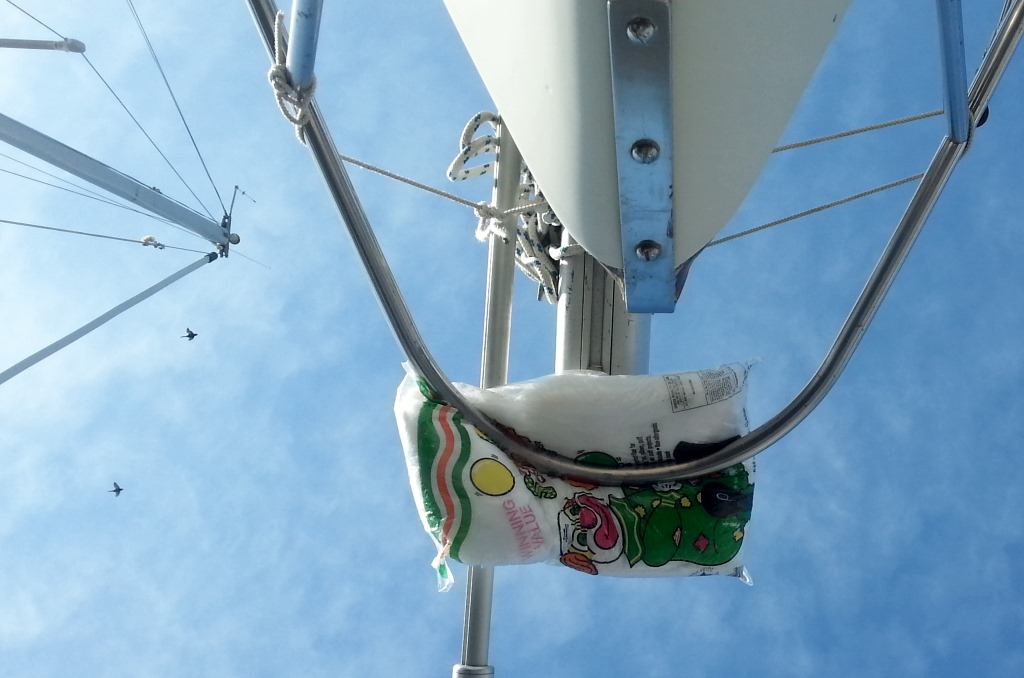 Also note the geese in flight. That picture is like my raindrops on roses and whiskers on kittens.

Over at Downe’s Fishing Camp, they had what I can only assume was once a boat in their front yard. It made me think of a conversation that probably started, “Well, the good news is that we found the engine…” 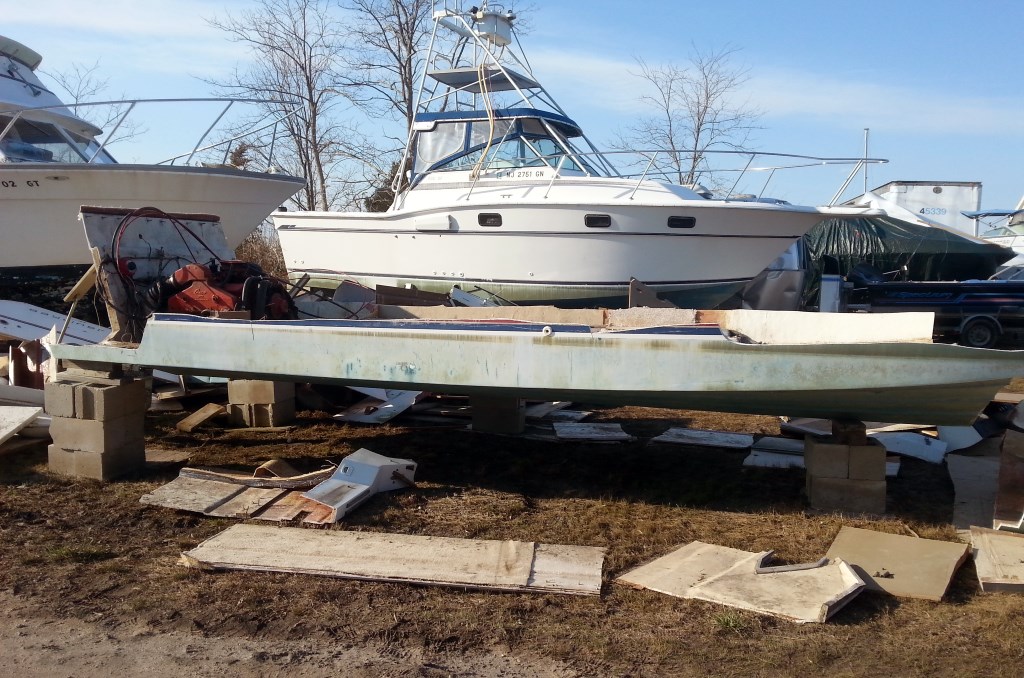 But while I was hanging out with clowns and chopped up powerboats, time was passing…and time was becoming a concern. I had at least four things that I needed to do at the top of the mast:

I was expecting that when Fortuitous was launched, the marina could send someone up on their crane to handle this stuff, but as the list grew, they convinced me to just pull the mast. In addition to making the repairs easier, it would allow a thorough inspection of the rig. This all made sense, but it also meant that more things were out of my control regarding the timing of when I might be able to sail. I wanted to get the marina working on their part before they became crushed with boaters all clamoring to launch once the weather turned, but before they could do anything I needed to get the bottom painted and I really wanted to clean and wax the topsides.

Jen and I took off of work Monday to knock out those tasks. We applied wildly caustic chemicals to some trouble spots on the hull, most of which wouldn’t touch the stains that we had. I started to wonder if we should even try to wax over whatever was on there without a deep cleaning, which we didn’t really have the products or equipment to do. Our ladder was also too short, and I realized immediately that we should have had a power buffer. Waxing was beginning to seem like a long shot. We decided to move on to bottom painting, and I made the mistake of looking to see how the yard guy was painting a nearby boat. He had a roller on an extension. I didn’t bring an extension. He had a full-sized roller. I had the 6in foam roller that I used to paint the bottom of the 22. The shadows were getting longer. I heard the horrifying clown laughing at me.

After some discussion with Jen, we made the difficult decision to give up on these tasks and have the marina do it. This was really tough for me. I believe in sweat equity and pride of ownership, and I want to be the kind of person who tackles these challenges on his own. On the other hand, I doubt that anyone has ever been on their death bed wishing that they’d spent more time compounding and bottom painting. It’s certainly not sustainable for us to farm out this sort of work on an ongoing basis, but as a one-time thing, I think this saved us a lot of time and effort for which there is little reward in nautical knowledge or expertise gained, and our boat is now in the water.

I took off (again) on Friday to see her go in.

I say that we “technically” splashed, because immediately after dropping in the boat, they unstepped the mast. I’d never seen this done, and it seemed like it would have been an extremely elaborate operation, but they have a pretty smooth process. Basically, their rigger just picks it up and carries it around the yard in one arm: 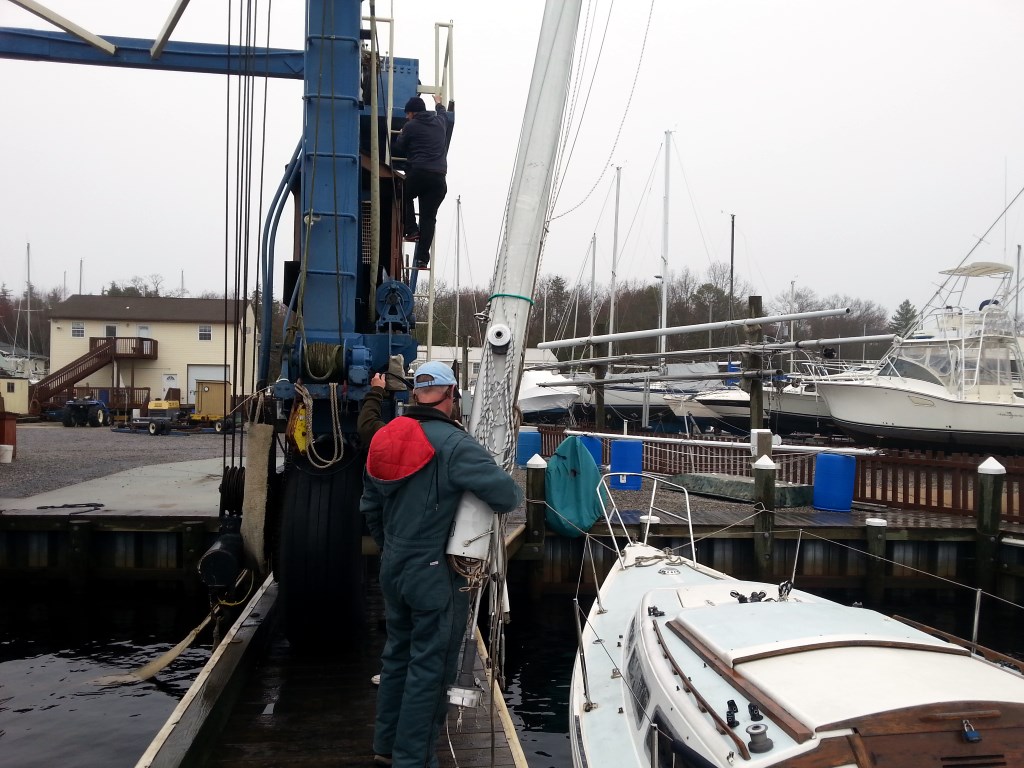 …assisted by a large crane on top of the travel lift. 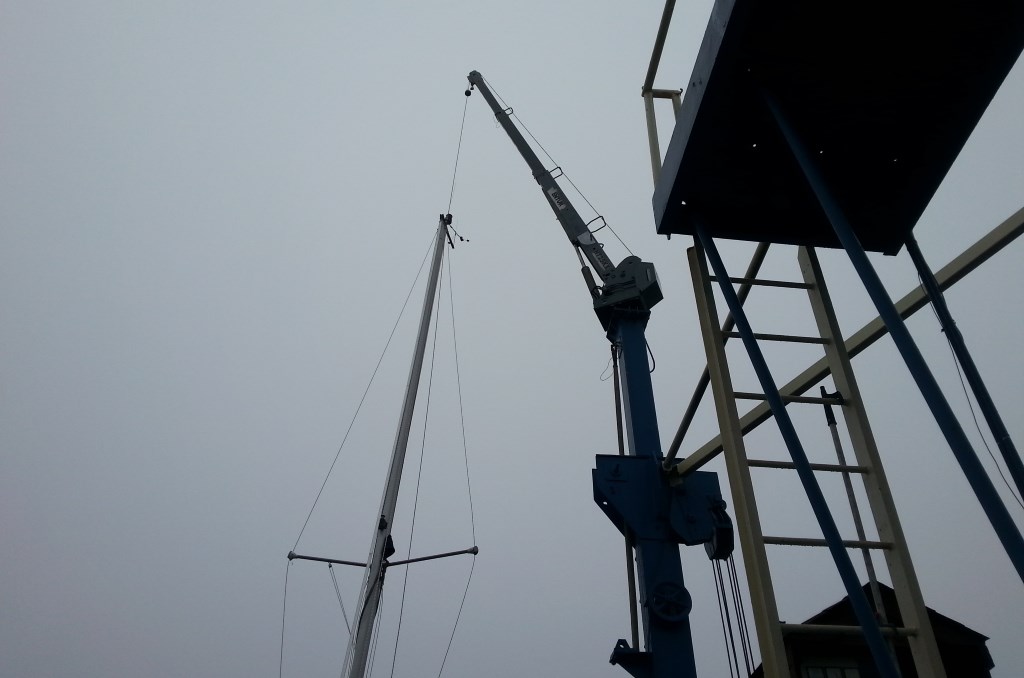 Jen and I returned on Saturday to complete the work on the mast and wash the deck and cabin trunk. We thought that it would be a good opportunity to do a deep cleaning of the boat with the mast and standing rigging off, since it would be easier to get around. We intentionally neglected any serious cleaning of the boat last year since we just wanted to focus on sailing, which made it more than overdue. While I’m not certain that pressure washing non-skid is completely safe, as an occasional thing, it can do wonders. We have a wussy electric power washer that we used successfully on the 22, and it did great on the 27 as well. There are still some areas that will require additional work, but overall the boat is looking better than ever.

Finally, I wanted to prepare for some engine work, so I went below to take pictures of our filters and things to assist in buying replacements. I couldn’t spin the T-bolt off of our fuel filter with my fingertips, so I grabbed the whole thing and turned it. When it finally gave, my hand got squeezed between the handle and a ridge on the top of the filter, which took a significant chunk out of the knuckle of my third finger. I’ve heard it said that a project isn’t over until you bleed, but this better heal before boating season, because there’s no way that I’m going to be able to communicate with jetskis without the use of my middle finger.

As usual, we had some ups and downs. Things are moving along though, and we’re actually ahead of a lot of people in our marina. It’s a little odd to have the boat in the water but for her to unsailable, but I expect that the mast will be going back on this week and we should be good to go shortly. 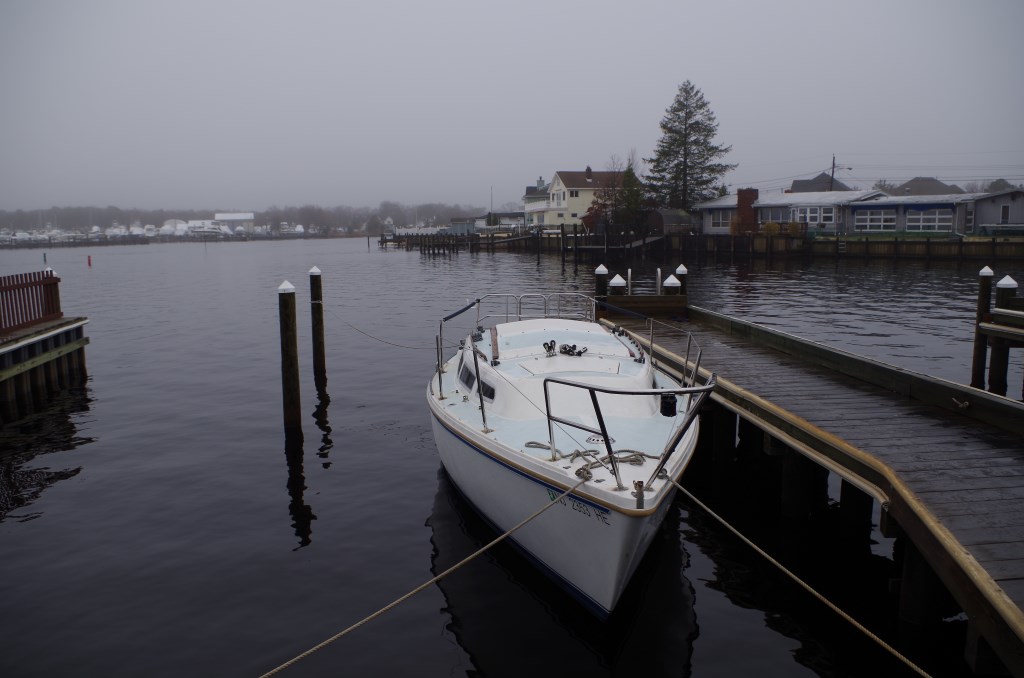