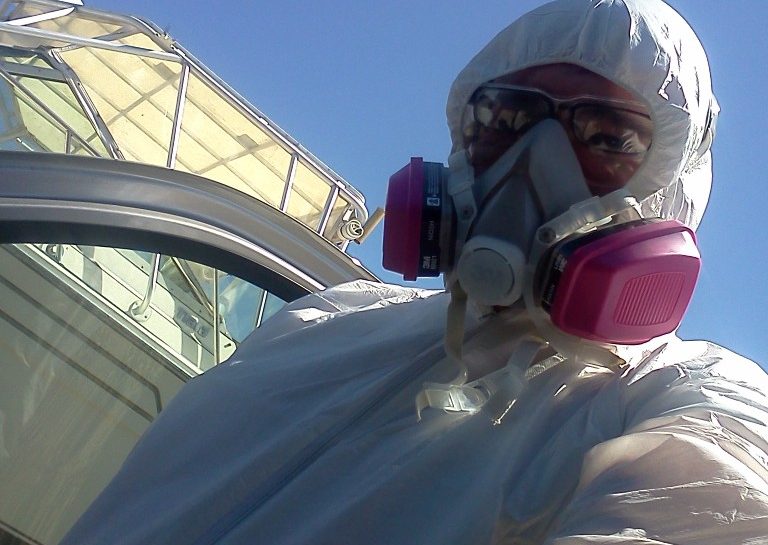 “Ouch, I Don’t Floss There”

Or perhaps I should just stick with Dr. Creepers. I look like I’m about to make meth in an RV somewhere.

And I’m sure that mentioning meth in our boat log is great for both SEO and Homeland Security profiling. Don’t taze me bro; this is a pop culture reference.

But anyway, Spring maintenance is fully underway on Fortuitous. Our boat is made of fiberglass. Some of the details of this might be slightly off, but “fiberglass” is a composite built up from layers of fiberglass cloth or matting saturated with epoxy or epoxy-like stuff (the term “polyester resin” comes up a lot, which may or may not be a type of epoxy, but either way it’s some ridiculous chemical that goes from a liquid to a solid when mixed with a hardening agent). This raw fiberglass is then coated with stuff called gelcoat, which itself might be another flavor of epoxy, but it’s shiny and nice looking and serves as the part you look at when you’re looking at a boat. Over the years there have been many formulations of resins and some of the older ones are not really 100% waterproof and are subject to osmotic blistering, where water can permeate the gelcoat, break down some of the resins inside, and cause a pocket of water, acids, unreacted glycols, and other gross stuff between the layers.

I have been nervous about the condition of our hull below the waterline for some time. When we got the boat it had an ablative bottom paint, which is a type of anti-fouling paint that is intended to wear away over time, exposing fresh poisons to keep critters off. Since we’ve never addressed the bottom, and constantly launch and retrieve on the trailer which entails a lot of rubbing, most of it appeared to be gone (in a splotchy way that looked like hell). There were some areas that looked like shallow craters that I was worried might be blisters or proto-blisters.

My nervousness was allayed when Val came down and took a look at it with me. He was able to confirm that Fortuitous has no blisters, and is generally in good shape despite our inattention. The scary areas that I had noticed were simply chips in the ablative paint, and nothing to be worried about. Still, I wanted to address the aesthetics, so I came up with this plan to get all of the old anti-fouling off of there and put some kind of hard paint on the bottom to protect the gelcoat. 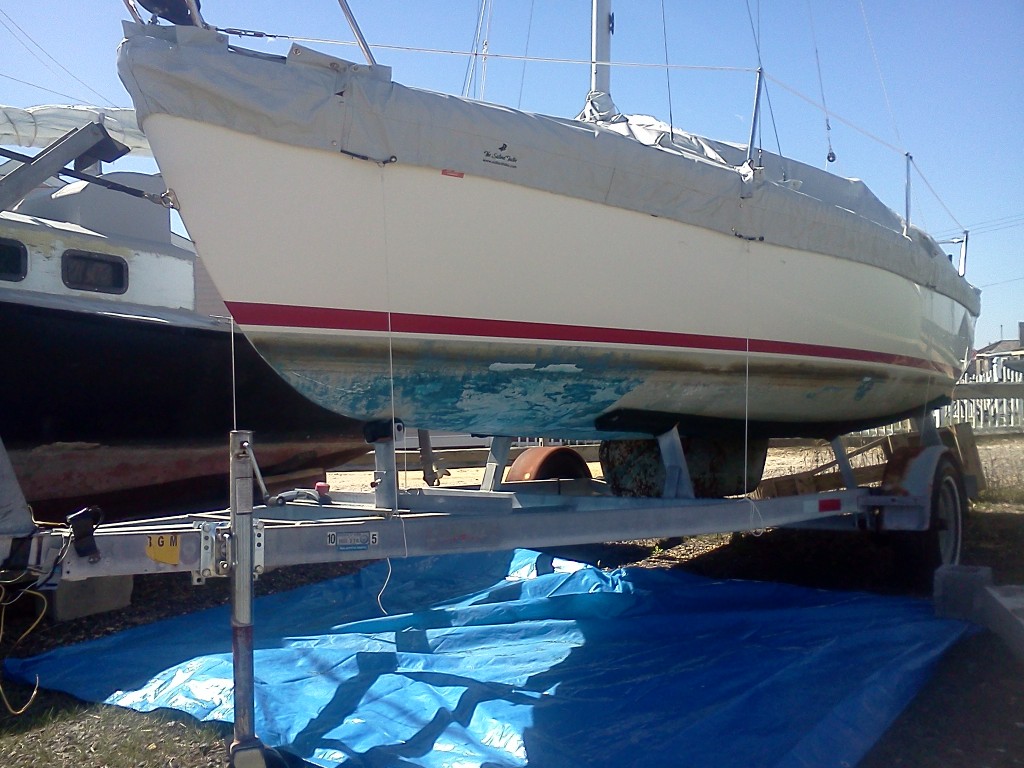 THAT PLAN IS AWFUL. Scraping bottom paint is a terrible process. First of all, my tyvek hazmat suit didn’t really match the distance between my shoulders and groin, so my initial streak of profanity came out in the alto range. My ability to move was generally restricted until the first time I tried to clamber under the boat and blew the crotch right out of it with a yelp. I described the rudder fairing process as cathartic, but scraping the hull was just grueling manual labor in a blue dust storm. It turns out that the whitish stuff that I thought was gelcoat or hull was just oxidized (I guess?), dried out bottom paint, and forcing the scraper over the top level revealed more blue paint. When I was making progress, that turned into blue dust that got all over everything, and where it had been finely polished the scraper wouldn’t bite into it at all without all the pressure I could muster, often while laying upside down on gravel, contorted around trailer parts. 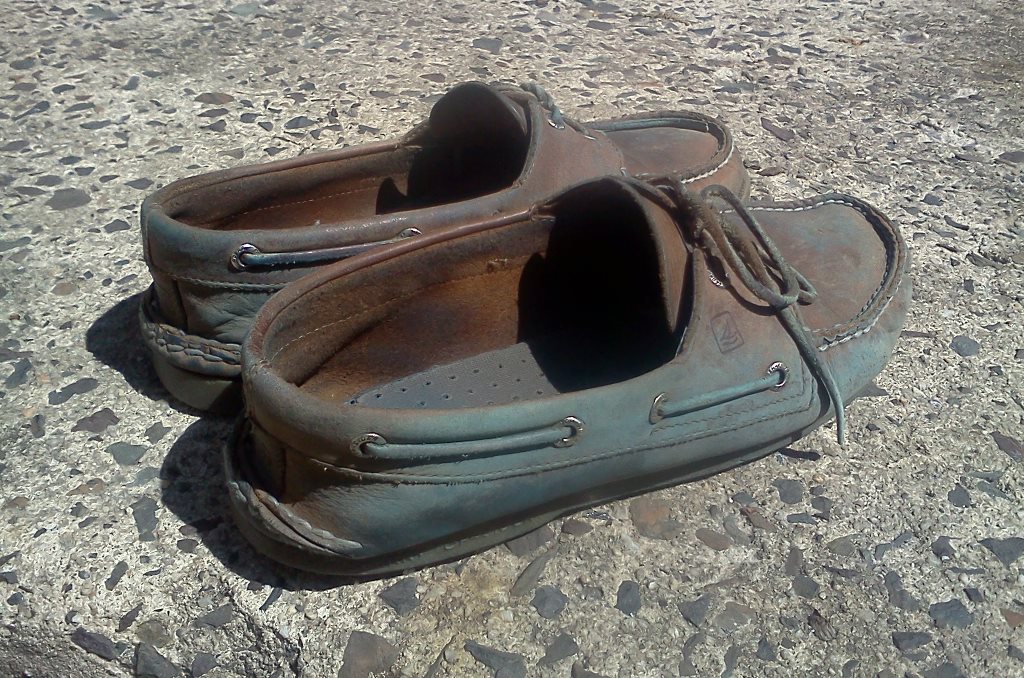 By the time I gave up, pretty much everything not covered by tyvec was blue, including my hands, ankles (through my socks?), crotch, hair, and face.  The respirator and goggles helped, but with all the crawling around the seal was far from complete, and I still got paint chips in my eye that I had to wash out in the pristine Trixie’s men’s room sink. I looked like an idiot, and I was incredibly sore. I know I’m out of shape, but man, it really kicked my ass. I think I will be starting a regimen of Bulleit shortly.

I didn’t get as far as I would have liked, but I have about 80% of the boat scraped. The remainder is on the stern, where it must have received a lot less ablative action and is very polished at this point and difficult to remove. My tentative plan for Phase II is to go after it with a palm sander hooked up to a shop vac, which may be less physically demanding and less smurfifying (or maybe not). I’m going to have to sand the scraped parts anyway, because there’s only so much that I can scrape and I want to get down to clean white gelcoat before painting.

The big remaining question is how I’m going to do the parts that are obscured by the trailer bunks. I have some ideas, but I’ll save that odyssey for when I get there.