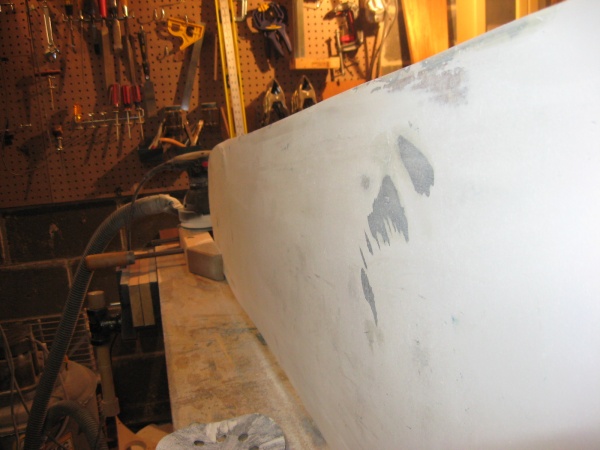 “Wabi sabi acknowledges three things: ‘nothing is perfect, nothing lasts, and nothing is finished.'”

Fairing a rudder is pretty cathartic. It looked like hell, slathering it with thickened epoxy made it look worse, then as it slowly gets sanded back the slop disappears and the foil begins to take shape.

The craters around the edge of the rudder and where (I assume) the prop gouged the surface of the side were filled over the course of two evenings with a mix of marine-grade epoxy and colloidal silica filler. The filler is like weightless powdered sugar, although probably infinitely worse for your lungs. If you put enough in, the consistency of the epoxy goes from warm maple syrup to peanut butter, and it’s like stone once it cures. bljones of Dock Six Chronicals fame showed me how to make a trough out of tape for the particularly bad spots along the edges, and I was able to build up a nice solid bead of epoxy, with gravity working for me instead of causing it to sag or run as it cured.

Tonight, I sanded it back. I used a bastard file (which I now refer to in the Portuguese as bastardo sujo thanks to Giulietta) for the really coarse work, then went to the random orbit sander with 80 grit and the shop vac hooked straight into its dust discharge. The surface epoxy was quickly erased, leaving only the filling in what used to be valleys. I was left with a pattern like the hamon on a Japanese sword, although this was no exercise in wabi sabi. This process most definitely flew in the face of impermanence. The Zen sense of embracing transience won’t come into play until the first time I run this bad boy aground. 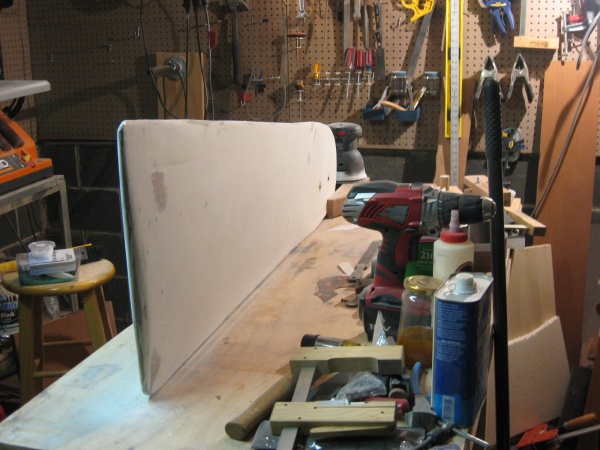