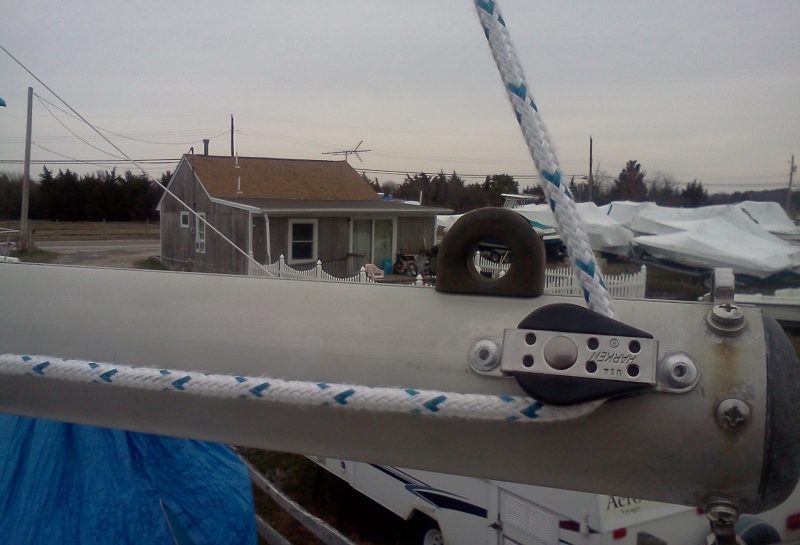 Over the winter, there has been much planning and much input sought on how to upgrade Fortuitous. I spent two days on the boat this weekend with help from Jen and Tim, and things are actually starting to make it to the boat.

I’ll let the pictures speak for themselves. As always on sailingfortuitous.com, click to enlarge.

Here’s the before and after on my backstay adjuster: 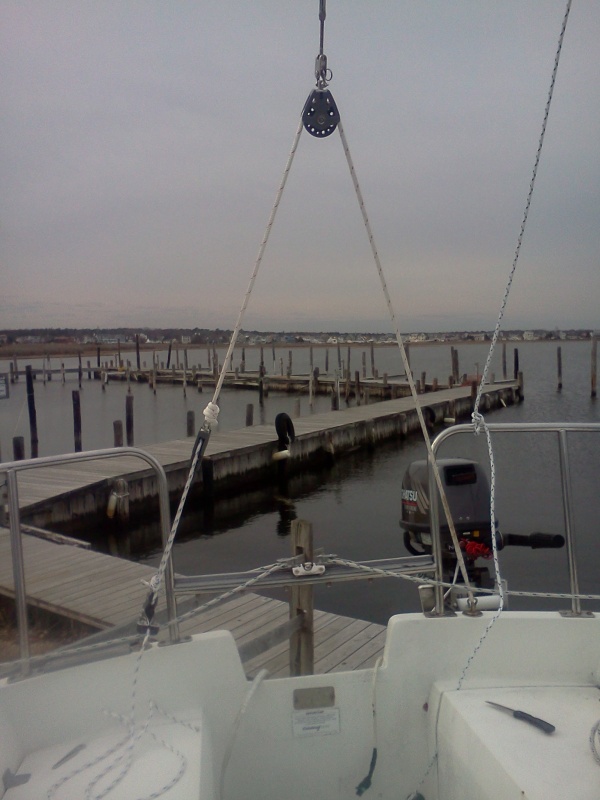 It’s way less complicated, better looking, has plenty of purchase at 8:1, has less junk to fail, and it lacks the 435 cotter pins that rip all my favorite sailing shirts when I’m sailing at my most leisurely: with my back to the stay and a rum drink to windward.

On Saturday, Tim (who fought with the jellyfish in a previous episode) and Jen (who proudly holds the rank of Tennille on our boat) helped with lowering the mast to attach some stuff aloft. Although this was our first time changing the mast orientation with the furler and foil on the forestay, things went relatively smoothly. The one hitch was that for some reason, I thought we just had to loosen the uppers and forward lowers to get the mast down. For future reference, the correct technique is to completely remove the forward lowers and loosen both the aft lowers and uppers. As a result of this mistake, I somehow managed to bend the crap out of a turnbuckle t-bolt: 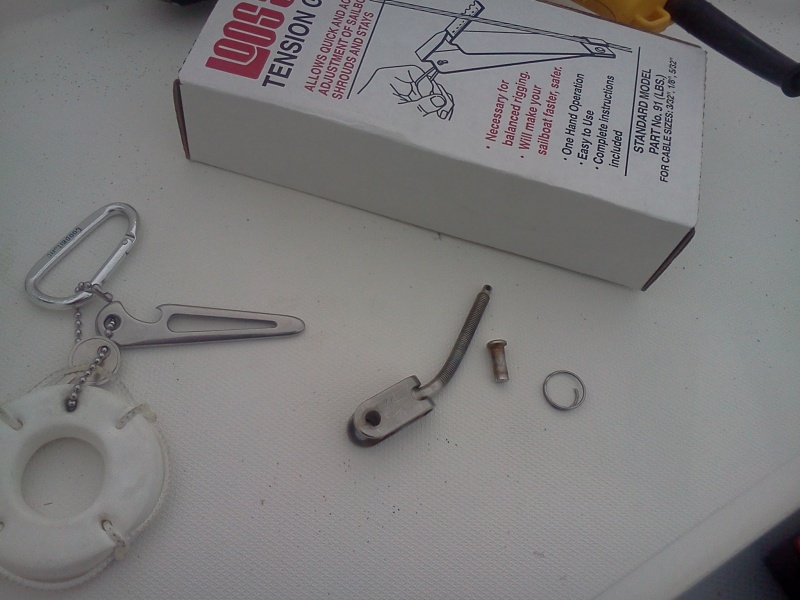 Fortunately, that was only a $10 mistake, which I also remedied today. The good news was that with the mast down, we were able to add several items aloft.

Look ma, no pigtail! The topping lift is working. 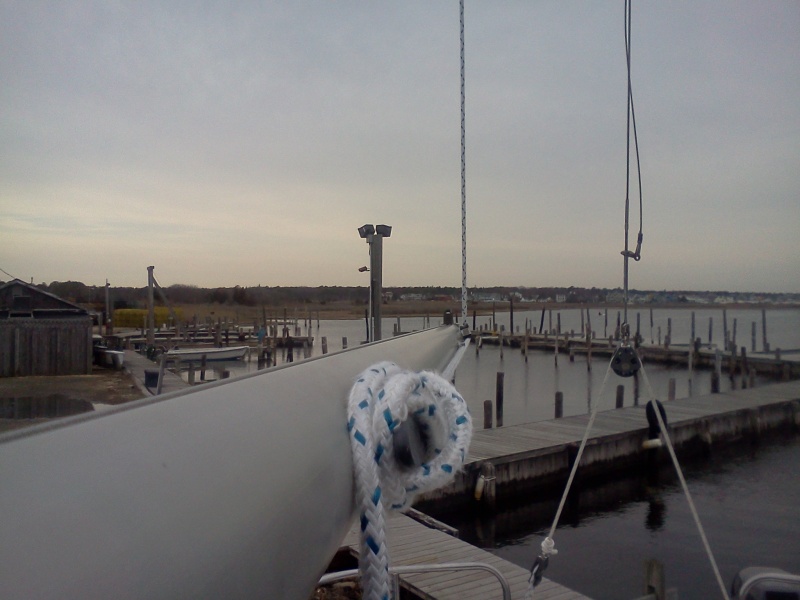 I realize that it’s just a novelty on a boat that will probably never have to fly a courtesy flag in a foreign country or raise Quebec to request customs, but it’s so nautical to have a fully functional flag halyard. 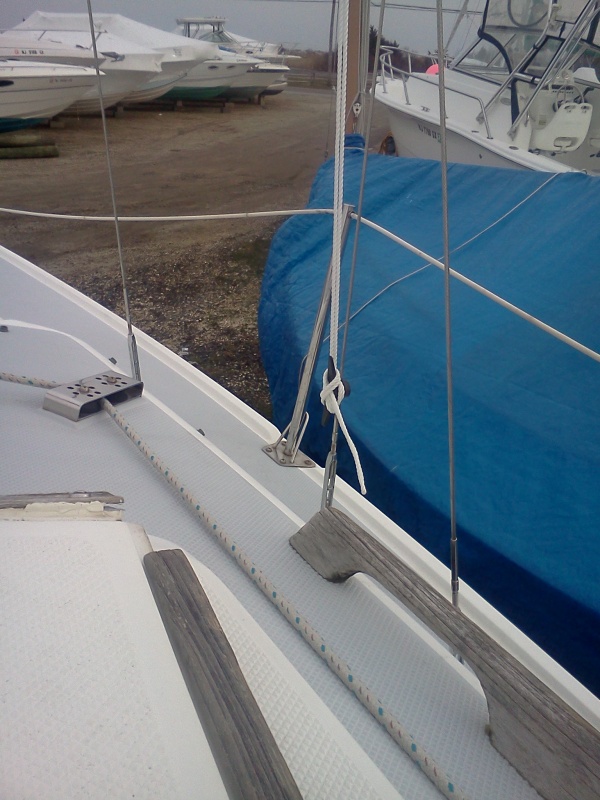 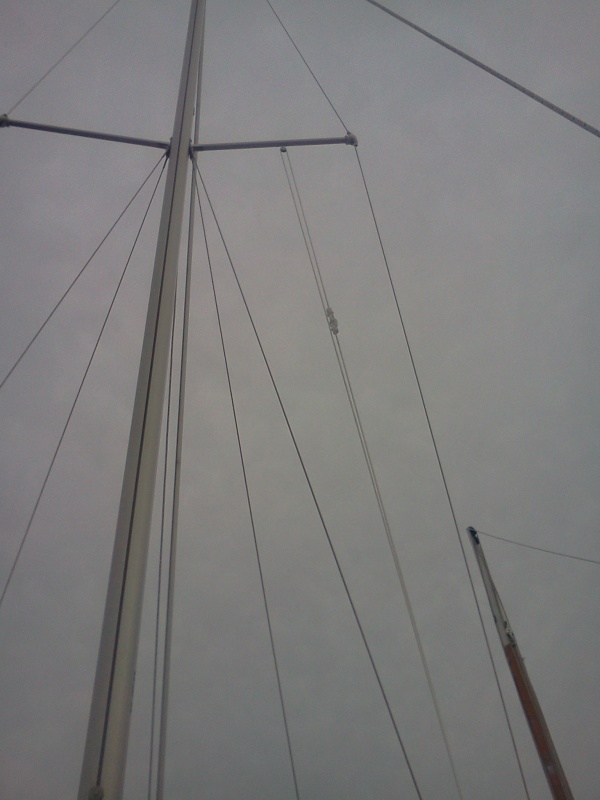 I did decide to go with the microblock instead of just a padeye. It’s pop-riveted to the spreader with copious amounts of Tef-Gel, and I only had to drill out one rivet during installation (put the Tef-Gel on before riveting, eh?). This was my first use of blind rivets other than fixing the blade on a crappy plastic snow shovel, so we’ll see how it holds up. It seems plenty solid. It’s also got some nylon sister clips on it, which are awaiting the Windjammers Sailing Club Burgee.

(If you haven’t seen the new windjammersailing.com website, check it out. It bears a surprising resemblance to this site…)