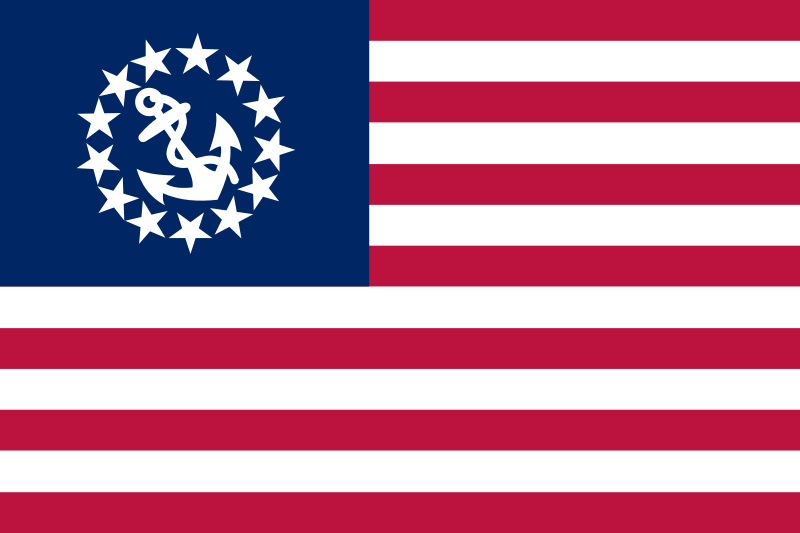 We celebrated Independence day in style by hoisting the Yacht Ensign of the United States on our backstay in addition to hoisting a full complement of sails—something that we haven’t been able to do much this season.

I couldn’t remember the entire deal with flying the Yacht Ensign, but according to the authoritative nautical resource Wikipedia, I was close. An ensign, in general, is the flag that shows the nationality of the vessel, and to my knowledge is always flown on or near the stern, either from the backstay or from a dedicated flag pole. It’s usually your nation’s regular flag, but this one is:

“A special flag, looking like the national flag and ensign but with a fouled anchor in a circle of stars in the canton, was created in 1848 as a signal flag to be used by U.S. yachts. This was not intended to be an ensign, but was intended to be used as a signal flag by a yacht to declare itself exempt from customs duties. However, many boaters started using this as an ensign, and eventually the government announced that they would accept this practice for boats in United States waters; but the national flag was still the only ensign allowable in international or foreign waters.” (1)

The article goes on to say that the Yacht Ensign’s official use was discontinued with the Vessel Documentation Act of 1980 (Public Law 96–594) (2) but that it’s perfectly legal for undocumented vessels such as Fortuitous to use it on domestic waters, since there’s no obligation to fly an ensign.

But anyway, sailing was great. We put a reef in the main, following only the adage “If you think it’s time to reef, it’s time to reef.” We may or may not have gotten away without it and in fact no one else on the bay seemed to have a reef in, but we had guests on board who had never sailed and the wind did build a bit throughout the day as forecast. We put the entire genoa out, which I thought might make the boat unbalanced but turned out to be just fine. Wind was from the west so we were able to pretty much beam reach the whole length of the bay. We cleared Berkeley Island Park, did a quick 180 to set the main, then pointed at Barnegat Light and let her go.

We got about as close to Tice’s Shoal as we ever have, but, being a holiday weekend, it was so packed that the First Mate vetoed the idea of trying to anchor there. We tacked and headed back to anchor at Berkeley Island. There, we had an opportunity to break out the new acrylic wine glasses and also sample some Sailor Jerry (which was fine for a spiced rum, but no Mount Gay Silver Eclipse, IMO). We also swam, and were again attacked repeatedly by jellyfish. Not sure what the deal with that is, but they were pretty thick. 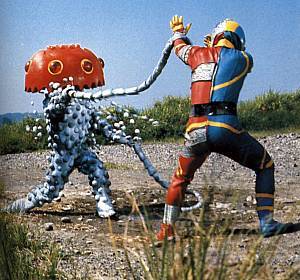 Tim, fighting with a jellyfish.