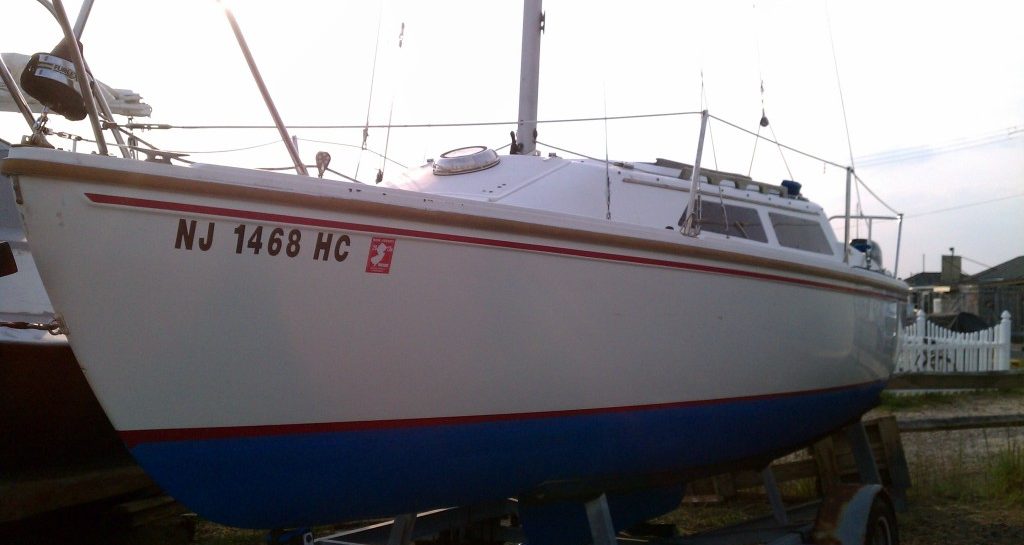 On Saturday, I returned to the shore to sand the rest of the old antifouling paint off of the hull. I came prepared this time with a larger hazmat suit, proper goggles instead of safety glasses, and a bunch of Advil. I also brought my Etymotic ER6i noise isolating headphones, featuring 36db of noise reduction (passively…these are essentially ear plugs with speakers in them. I can’t stand the idea of active noise cancelling headphones). While making yourself deaf may be a dumb thing to do in an active boat yard, I wasn’t about to listen to my sanding equipment all day. What sanding equipment, you ask? Well, I had my 5″ random orbital sander. It’s laughably marketed as “dustless,” but the little dust bin is only about the size of a beer can and I’m not sure that it would have even captured the dust kicked off by the antifouling, since it had no problem passing through my socks unimpeded. Anyone who’s ever detonated a blue toner cartridge from a color laser printer will know what I mean—except that the antifouling dust specifically contains stuff that they just call “biocide.” I assume that I’m made of bio, so I hooked my 5 gallon shop vac directly to the sander to try to draw as much dust as possible away. Of course, the hose on my vacuum is exactly the same diameter as the port on the sander, so I had to tape it together with several dozen feet of Gorilla Tape, which actually worked surprisingly well.

Sanding was way, way better than scraping. I approached 80-grit enlightenment at several points in the process:

As dust is consumed
the swirling sands reverse time;
mind the damned gelcoat.

While the sound of the machinery was probably annoying for everyone else at the marina, my headphones allowed me to retreat into the smoothest hits of late 70s and early 80s light rock. I had imagined getting the boat back to her glistening white factory finish, but I learned that the pigments in the paint stain the gelcoat, so you can’t go too far. The important thing, I think, was to just get all of the soft ablative paint off and scuff what remained to insure that the new paint would adhere. Things went well, and I wasn’t nearly as blue or sore as I was last weekend.

On Sunday, Jen came down with me. Our first stop was West Marine to actually buy paint. There are two major kinds of antifouling: hard and ablative. Ablative paints wear off slowly over time, like a bar of soap. They’re constantly exposing fresh poisons to the things that would like to attach to your boat, they don’t build up which should theoretically make re-application easier, and they survive being out of the water without losing their effectiveness. Hard paints, on the other hand, are good because they can be polished to a very smooth surface, which can actually make your boat go faster, and they don’t rub off when you put the boat on the trailer, but they do build up and need to be stripped every couple years and lose their antifouling properties if kept out of the water. We went a hybrid called Pettit Vivid, which has many of the best properties of both.

Before we started, we wanted to get the cover off. I’d left it on to keep the boat from getting dusty during the dirty work, but we didn’t want to get paint on it or the tiedowns. This seemed like it would be simple, except that the 80 degree temperatures apparently woke up every wasp from Sandy Hook to Cape Henlopen. And I’m not talking about the White Anglo-Saxon Protestants so common in sailing circles. It seemed like every time we touched the cover, some nasty stinging insect flew out. I have no love for these guys, but Jen has a genuine irrational phobia of anything bee-like, so I was on my own as she twitched and screamed at every butterfly that flew by her station 20ft away. The cover is pretty good at, uh, covering the boat, so there weren’t many potential points of egress for them, but I had this mental image that they were going in and out of the scuppers and had built a nest in the cockpit the size of a trash bag. I tried to watch where they were going, but they weren’t making any real sense, and eventually I got up the nerve to climb the boarding ladder and throw off the cover. There was nothing. I collected the aluminum rod that holds up the witch’s hat and with a two-handed Jedi grip I proceeded to poke and prod the cover off the boat, revealing nothing. I guess they were just flipping out randomly, excited to be in the surly stinging phase of their life cycle.

With that behind us, we could begin in earnest. I taped off the waterline while Jen washed down the hull with paint thinner—we followed the instructions for this stuff meticulously because 1) I don’t want to have it all flake off in July and have to do this again and 2) at $200/gallon, it’s pretty serious business. When I actually cracked open the can, it was like a sizeable wad of poisonous cookie dough in a pail of green and black watery solvent. Stirring it with a paint paddle was futile, but Trixie’s came to the rescue with a mechanical paint shaker. It was a little steampunk compared to the thing at the home improvement warehouse, but shakin’s shakin’ as they say, and it did the trick.

From that point on, it was just a matter of rolling it on. I had a 6″ foam roller to get a nice thin coat. Jen kept the roller tray full and gave me encouragement and our boat went from a hideous holstein look to a beautiful electric blue. These Vivid guys weren’t kidding with the name…it really doesn’t look like other bottom paints. 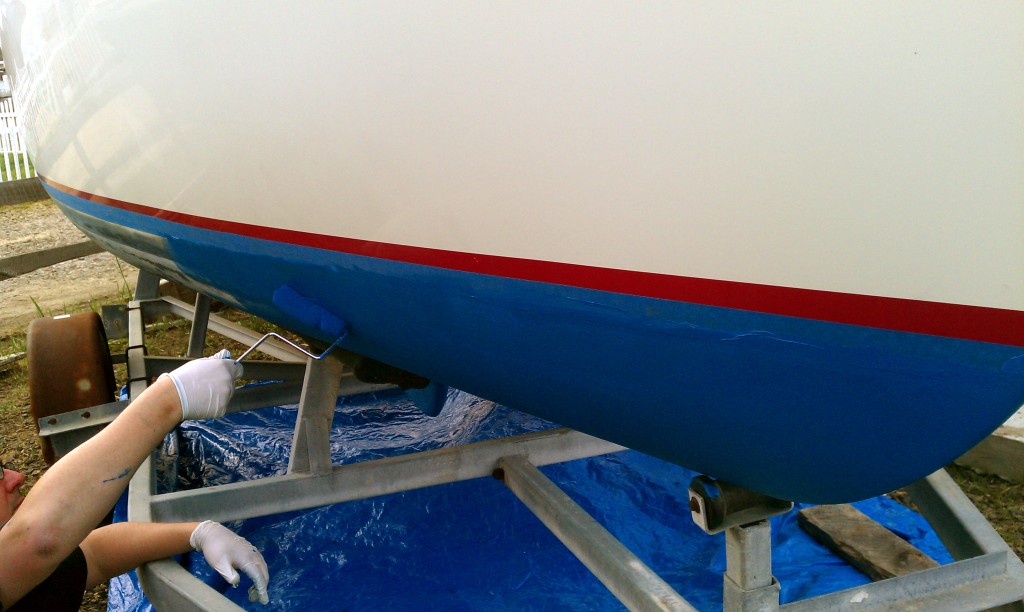 Trixie’s is going to help me lift her up to do under the bunks. That and another coat or two all around, and we should be ready to sail.