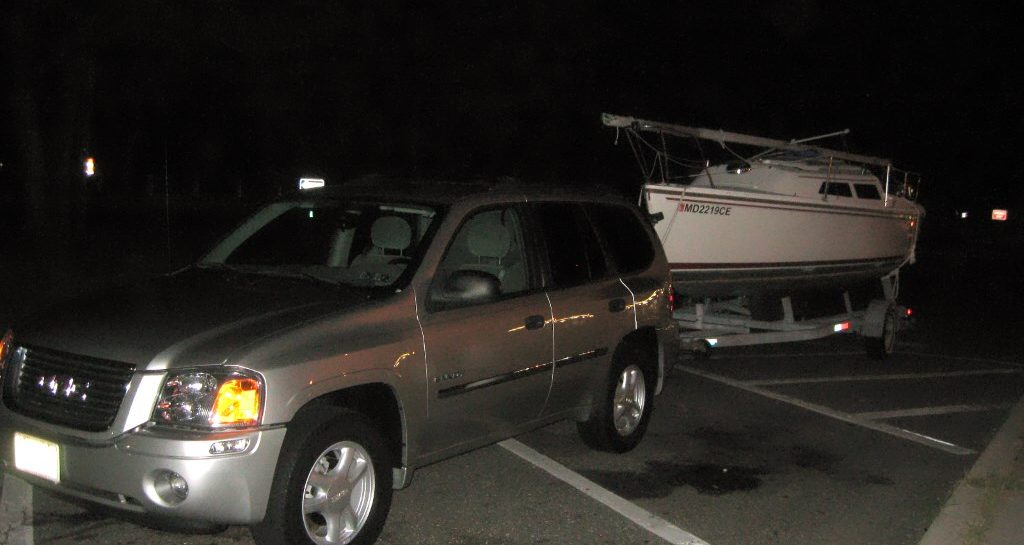 Springtime. When sailors are supposed to be thinking of antifouling paint and wax and getting their boats ready for the sailing season ahead. Except when it snows all day in April.

Clearly, from the lack of log entries, we haven’t done anything yet to get Fortuitous prepped. I visit her, check her cover, check the bilge and batteries, but it’s been freezing or snowing or generally crappy every weekend and nothing tangible has been accomplished. Maybe I’m just being a wuss—Sailor Steve launched Revolution this week in 35°F—but “fortuitous” and “fortitude” do not share a common Latin root (fors=chance; fortis=strong, brave).

In the spirit of fortuity, we decided that since we couldn’t do anything with the boat, we should go buy a car in the snow. I’m going to say that this is vaguely sailing related: the lives of our boats and trucks have always been intertwined. Like when the transmission of my S10 disintegrated while we were trying to pick up our first boat in Baltimore. Amid the panic that followed, I decided to spontaneously buy another truck on the same day that we actually bought the boat, which is the kind of decision making that makes financial planners eat their own faces.

Despite briefly losing her mind on the day that we were supposed to tow our boat from our house to the shore, that truck was pretty good to us. She was built like an actual truck—body on frame, her straight-six had plenty of torque for pulling a boat up a ramp, and real locking 4WD made her a beast in snow and off-road. Now that we have a non-trailerable boat though, we just don’t need that kind of power or the associated fuel consumption. With 160,000 miles and an occasional front-end noise like a garbage disposal full of marbles, it was time to make a change.

I should say that I hate buying cars. I find the whole process ridiculous.

For example, I went to a dealer’s website and foolishly pressed the “Click for our Price!” button next to a car’s MSRP. Obviously, it didn’t give me their price, but opened a form for me to give them my contact information. Over the span of four emails, two requests for my phone number, and one request that I drive to Old Bridge in person, they were only able to provide me with the MSRP, which I clearly already knew. I was told, “If you come in though there is some room to negotiate…the power is in your presence and we have competitive deals going on right now.”

The power is in my presence? This sounds like something The Dude would say, based on something he heard in passing and didn’t quite understand. The power is, like, in your presence, man. Needless to say, in 2016 I don’t click a button on a website as a preamble to a 60-mile drive or to start a telephone conversation. I’ve heard lots of success stories around web-based car dealer interactions, but apparently not all dealerships are comfortable with this notion of “modern times.” They still want me to sit around for hours while they act out the tired melodrama of having to ask their managers eight times to get down to the market price of the car.

I was talking to some friends online about this, and one of them suggested that the process could actually be fun if I just did my homework and was willing to walk away from the deal at any point. He had apparently once executed a power move on a dealer in which he wrote down a price on a piece of paper and stuck to it until they sold it to him for that amount. I started to think about what would happen if the whole world were that “fun” and replied with something like:

Reminds me of the other day when I wanted to buy a bag of Munchos. I drove across town to the grocery store and was pounced upon by a salesman who had been lurking like a buzzard in the parking lot. He led me inside, photocopied my birth certificate, and let me look at the array of savory snacks. We chit-chatted uncomfortably about why I was interested in Munchos and he confirmed that they were indeed an excellent treat. He told me that I was in luck, and that I could have a fun-sized bag that very day for a sum of $6.59.

I took out a quill pen and wrote $0.99 on my calling card. I placed it face down on the faux-walnut desk and slid it over to him. After a brief review, he declared, “I’ve got children to feed, sir! I’m afraid I can’t go that low!”

I cheerily bid him good day and drove home. When I arrived, a telegram had already been delivered, informing me that the grocer had been in contact with Mr. Piggly T. Wiggly himself, and that they were willing to re-open negotiations, given that it was near the end of the quarter. I dispatched a carrier pigeon with a note informing him, in no uncertain terms, that I would pay not a half-penny over $0.99!

Before long, a mime arrived on a bicycle, climbed out of an invisible box, and handed me a perfumed note which read that Mr. Wiggly had run it all the way up the flagpole to the Secretary General of the United Nations: the Munchos were mine at their fair market value! Hooray! All I had to do was drive back to the grocery store a second time and claim that salty, salty victory.

Our experience wasn’t quite that bad. During one of our guy’s many trips back to his manager, Jen (usually known to our salespeople only as “The Little Lady,” “The Missus,” or “You Can Sit in the Back for the Test Drive” during car negotiations) asked me if I was genuinely saddened by the $7 discrepancy that I found on their worksheet, or if I was just acting, to imply that I literally might not be able to afford an additional 0.035%. The truth is, I don’t know; I don’t consciously do it, but the jockeying and dickering is so infuriating to me that I may work myself into a fugue state in which my already barely accessibly emotions are stripped down and manipulated for the single purpose of not getting screwed over.

In the end, I got what I believe to be a fair price on a slightly used 2015 Subaru Forester. 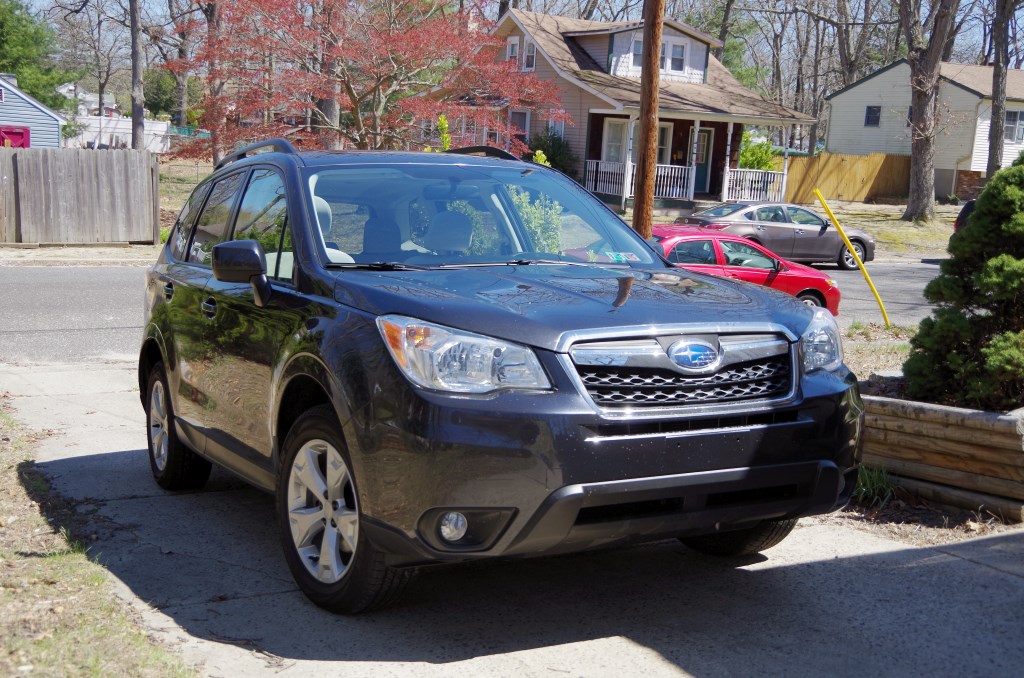 Subaru is the Japanese name for the star cluster that we call Pleiades (hence their logo), and Pleiades derives from the Greek plein, which means “to sail” (the use of the star cluster as an aid to navigation predates the invention of the Seven Sisters from Greek Mythology), so again, I’m going to chalk this up as a sailorly activity.

Maybe next weekend, if it doesn’t snow again, some of our sailorly endeavors will actually be on a boat.

4 thoughts on “Say Goodbye to the Old Gas Guzzler, Russ”