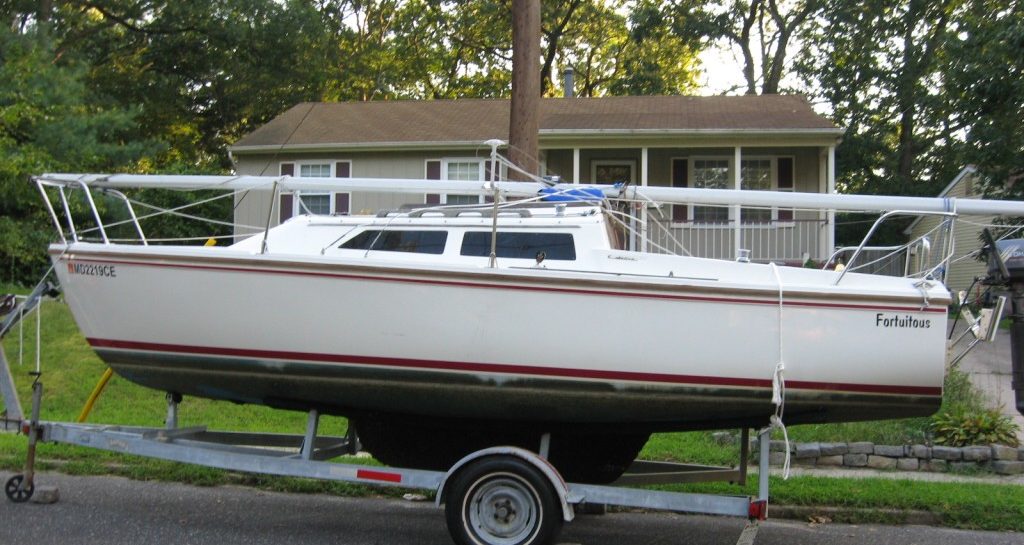 Last night, we got her home. Our plan was to leave her in the driveway until we could get her registered and insured, then move her to a marina about an hour away on the Barnegat Bay. The thing was, she wasn’t close to fitting in our driveway.

Ok, the photo is a bit of an illusion with the perspective, but still, it was a problem. Not being able to leave her in the street for several days, I had to call out another day to work on the registration, insurance, and transportation. I also needed to deal with my old truck, since it was still sitting at the shop. At the very least, I needed to swing by to get my trailer ball/drawbar/whatever-you-call-it so that I could try my hand at towing in my new truck. Jen went to work, hoping that I’d be able to pick her up on my way to the shore.

First stop was the DMV, or the MVS as it’s known in NJ for whatever ridiculous reason. It was early on a weekday, and it was blissfully empty. I had visions of breezing through and maybe getting it down to the shore in time to step the mast, which, of course, was just the innocuous setup for the obscene punch line.

My wife had reminded me of troubles that she’d had in the past trying to do mundane DMV things with cars that were technically in my name, so I thought I’d be courteous and put both of our names on the titles. I was informed by the DMV receptionist when she handed me the stack of registration papers that BOTH of us had to sign everything since we were co-owners. Since Jen was at work, my tentative plan was to leave the DMV, “have her sign the papers,” then return to complete the transfer. Just a small hiccup. I decided to go to a diner to get something to eat and fill out the forms “in preparation for Jen to also personally sign them.”

On the way out of the parking lot, the gas gauge on my new-to-me truck was reading empty and dinging at me relentlessly. I expected to get poor mileage with it, but it really didn’t seem like I’d driven it that far in the last day, and I could have sworn that the dealer filled it before I left. Oh well, I pulled into a gas station and asked them to fill it up. I argued with the attendant when he could only squeeze 6 gallons in it, telling him that it was reading dead empty and that I sincerely hoped it had more than a 6 gallon tank. As I pulled out of the station, the gauge read full, then 1/4, then 3/4, then the check engine light went on and then [insert stock footage of nuclear weapons testing].

I called my salesman directly and asked if there was anything I should know about the truck that he sold me. I suppose it’s difficult to surprise someone in that field with this sort of problem though, and he calmly asked me to bring it in. So I drove from Turnersville back to Burlington, thirty miles in the wrong direction. Since I got it used, the dealership couldn’t deal with it themselves, but sent me to a Chevrolet dealer in their group and promised that they’d take care of it.

They quoted an hour and I tried to make the best of it. I had plenty of time to complete my paperwork. I tried to get the insurance, but they needed me to email them pictures of the boat, which I couldn’t do from my phone and Jen couldn’t do from her computer at work. I called our mechanic about my truck and he said he’d check it out to make me an offer on it and call me back, which he didn’t. The coffee machine in the customer lounge of the Chevy dealer looked as dormant as the showroom floor, so I had a Coke. I sat in a Camaro. I sat in a Corvette. I sat in a Silverado. I wandered around outside. It was brutally hot out and the bleaching sun made me flash back to an intricate series of missteps I’d committed in Los Angeles a decade ago. A few hours in, I was told that they would have to drop the gas tank to get at a sensor that was mounted on top of it, and that it would be a few more hours. I went to a diner since I hadn’t ever made it to the one I resolved to go to hours ago and called in a mercy run from Jen to come get me.

It was maybe 2:30 when she showed up, even despite her inadvertent shortcut of driving the wrong way on a divided highway in order to get to the diner. The marina office closed at 4:30 and was over an hour away, and we couldn’t lease the space without the registration, so we made a dash for the DMV office in Mount Holly. Unlike my experience in the morning, this office at this hour was full beyond capacity, and the clientele ranged from irate to schizophrenic and irate. Apparently, the protocol is for one employee to sleep in her chair while the employee with the beehive hairdo technically pushes forms around and collects outrageous fees. We wondered aloud about what the people in front of us could have possibly been doing. Getting a salvage title issued for a car that they stole outside the borders of the United States? Requesting a custom license plate with a nine-character profanity? Registering a time machine of their own design? (And if so, why now?)

Eventually we got our decals and started making our best speed toward the ocean, still without the boat. We arrived just before closing and explained that we were the ones who had called about the parking spot. There was a slight moment of panic when the marina’s steward/bait clerk told us that we could fill out the forms when we brought the boat in—that would have meant another day of the boat in our yard since they were closing for the day—but eventually we got it all squared away and even got it for the previously quoted price after some discussion.

While we were on our way there, I got the message that my new truck was fixed. So from Bayville, we drove back all the way across New Jersey back to the Delaware River. We now had two cars. We agreed that Jen would go get something to eat, I would go to get the drawbar out of my old truck, and we would meet at home to take the boat back to the marina.

The mechanic was a relatively short jaunt down 295. Of course I took 130 because I thought it might be faster and was wrong. By the time I arrived, they were closed. We thought that they might be, but also thought that the truck was in the main lot, where I’d still be able to get to it to get the trailer ball. It had been moved into the locked area of their yard. I could see it, right there, just a fence and angry dog away, but couldn’t get to it. I stalked around the building hoping that someone would be there and called them several times, but it was clear that whatever nautical deity I’d pissed off was still angry with me.

In a last ditch effort, I called Jen again and asked if we could borrow her parent’s trailer ball. She tried and there was no answer. I drove to their neighborhood, went to a Wawa, and sat in the parking lot for a while to try to figure out what to do next, hoping that there would be some magical resolution. It was already too late to call my local police to plead with them to let me keep the boat in the street one more day. I considered just buying another hitch ball, even though mine was only a month old and never used, but Trailerama (by far my favorite trailer supply store) was also closed and I couldn’t think of anywhere else to pick one up on short notice.

I was ready to go home, but called Jen and asked her to try her parents one more time. This time they answered and I was able to go get the trailer ball, right around the corner. By the time I got home, got the license plates on the trailer, and got everything hitched up it was completely dark: time to learn how to tow a boat.

Though woefully indirect, we took big highways. They were smoother, caused the boat to bounce around less, and I was able to drive slowly without having people going crazy trying to pass me on two lane roads. I think leaving at night helped, and I was glad also that it was a Thursday instead of a Friday, so there weren’t as many shoobies on the road. The trailering went remarkably well. I stopped at a rest stop on the Parkway just to make sure that all my tiedowns were still holding and noticed that my port trailer lights weren’t working at all. Apparently something came loose and allowed the wiring to drag, and one set of wires had been abraded straight through. Having been through far too much to let that get me down, I stripped back the wires with a Swiss Army knife and my teeth, twisted everything back together, and insulated it with a piece of previously-used duct tape. 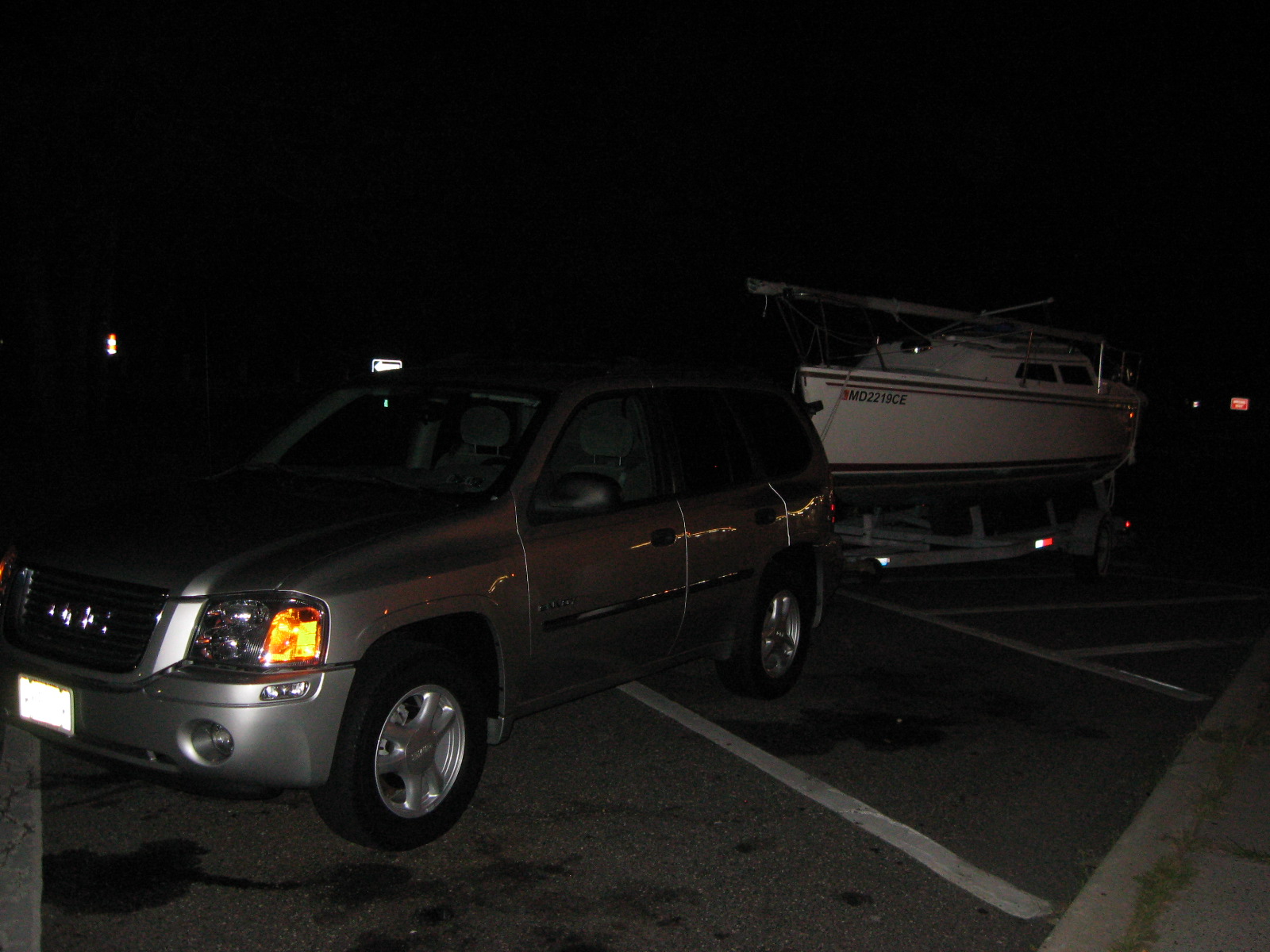 It was technically Friday before we got her unhitched and started back home, but it felt pretty good to have the boat next to the bay and in proper proportion.