Over the course of the next few days, things variously unraveled, appeared to ravel, then unraveled again.

Mistah truck—he dead. The mechanics confirmed that the transmission was gone, and I couldn’t see putting $1500 into a 15 year old truck. I now had to figure out what to do with it.

Jen’s parents were supposed to be coming down from their summer house, and they agreed to help us get the boat using their truck. We went back and forth with the seller on which day we should come back to pick it up, and coordinating everything was fairly excruciating given how close we’d been on Sunday. We eventually settled on Wednesday, and I put in for a vacation day.

Back when we had the extra truck, we had discussed maybe eventually trading in my car for an SUV that could haul the boat as well as a few people and things if necessary—the S10 was just a pickup and could only really move two people and gear that you wouldn’t mind getting rained on in the bed. I started looking at ads for lightly used trucks and trying to figure out what I needed to tow the boat well. There’s a lot of variation between the “crossover” station wagons and the full-on manhood compensators. At least looking at towing ratings gave me something to think about while waiting to get the boat.

It started as an academic exercise, but I found a reasonably priced 2006 GMC Envoy with low miles that I thought fit the bill: a straight 6 with enough power to pull a boat up a ramp but with decent enough gas mileage that it could replace my car as something I’d actually drive around town. Early on Wednesday morning, I drove out to Burlington to take a look at it, and really couldn’t find anything that I didn’t like about it. I was eventually able to work a favorable deal to trade my car for it, although it did take me about 5 hours (it’s a grim time to hang out in a car lot…the dealership where I bought it was down to four salespeople total out of an original 15, but I guess that makes for a buyer’s market). By the time I was leaving the lot, I received word that Jen’s parents were already leaving to meet up with us.

They beat me to my house by less than 5 minutes. Everyone was excited to see what I drove home in, and probably wondering what kind of mental illness would make someone buy a truck and a boat in the same day. Regardless, it didn’t make sense to try to tow 4000 pounds a hundred and some miles on a shakedown cruise, so we went ahead with the original plan. I had spent so much time at the car dealership, I hadn’t even taken a shower or eaten, but we set off to get down to Baltimore.

The drive down was uneventful, with just a brief stop at The Maryland House for some dismal yet somehow satisfying Popeye’s Chicken. We arrived in Fells Point a little early, but the seller was already there and we got started. After a quick look at the boat, we hooked up the trailer and went to the public ramp down the street. The seller motored the boat over by water.

With the help of several kind bystanders and a courageous wading into the snack food wrappers, dead things, and (presumably) hypodermic needles by our obviously motivated seller, we were able to extract the boat in only a few attempts.

Other things I learned:

Although I’d been reading about sailing and trailering for a while and knew all the stats on this boat, I became quite concerned when I saw this thing out of the water and in perspective to my father-in-law’s now tiny truck. Not to mention that the mast was now 40′ in the air and somehow had to be taken down with the boat perched on a wobbly trailer to which it was connected only by a rusty winch full of inappropriate rope and a tenuous faith in gravity.

The seller did most of the work in unstepping the mast and prepping the boat for travel, and he made an effort to show me how it all worked so that I could put it back together, but I was mostly concerned about what ridiculousness I’d now gotten myself into and I nodded away a lot of it.

Still, it eventually got done. We unceremoniously signed the title, handed over a wad of cash, and we trailered it home to NJ as our new boat. 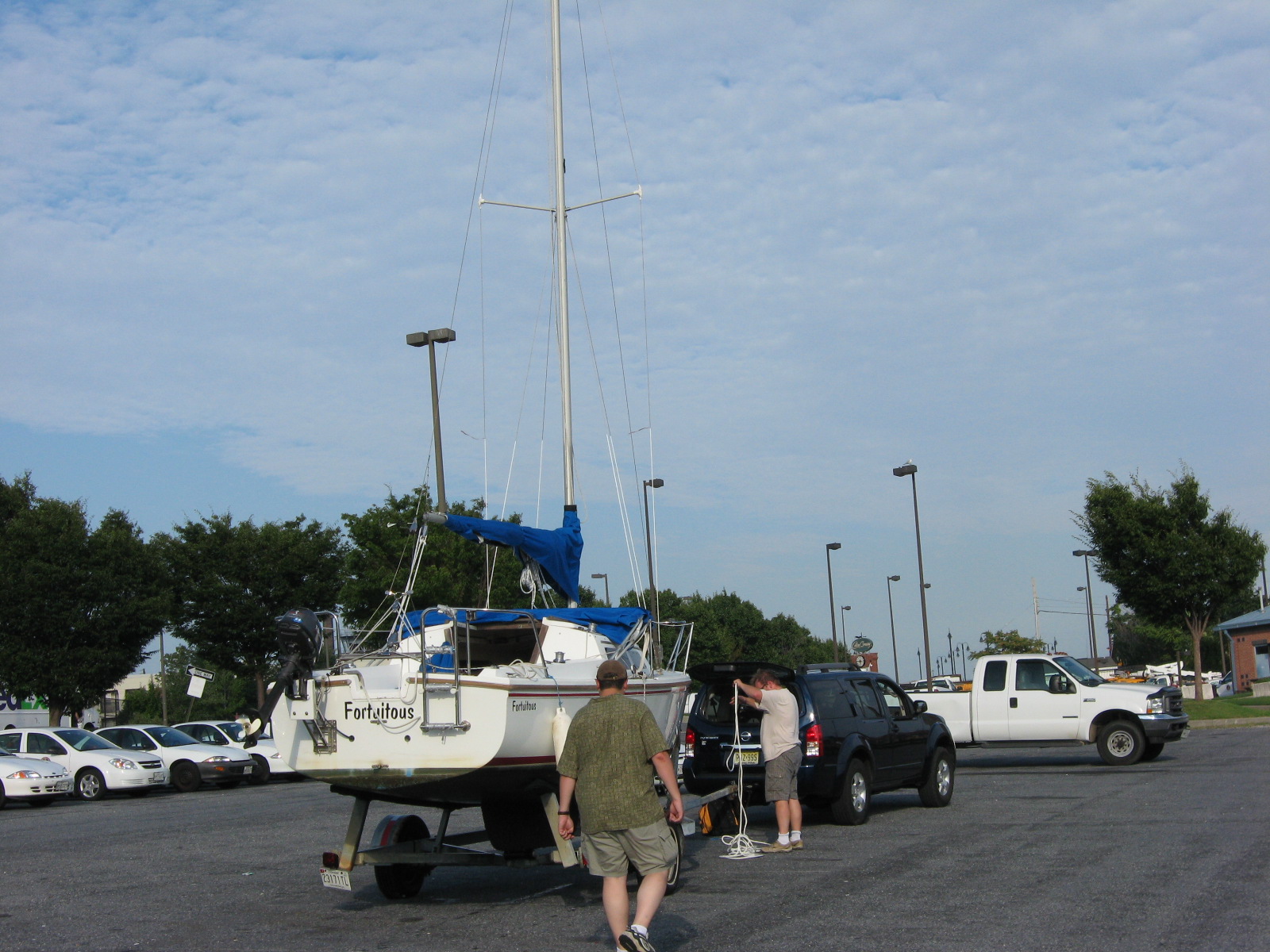