Well, this was it.

Although I’d never towed a trailer, never owned a boat bigger than an 11′ plastic jon boat, never unstepped a mast, and never tried to pull a keelboat out of the water, we were barreling down 95 South in my ’95 S10 pickup to go do all of these things. The pickup had been a gift. It had been sitting in my cousin’s back yard for a while, and he signed it over to me to keep as an extra car. It had been a fun beater, good for a pointless run through the woods or for picking up a load of mulch from the garden center. It had a lot of miles on it, but with a 4.3L V6 and a brand new Class III hitch, it wasn’t a bad pick for towing a pocket cruiser.

Until the transmission blew up on 95.

The anticipation had been growing as we were only about 15 miles out of Baltimore, and it was relatively easy to convert that into concern when we suddenly weren’t able to maintain our speed. I pulled over at mile marker 72 and feebly attempted to locate and then check the transmission fluid dipstick. I’m no mechanic, so it was difficult to tell the rust and general engine filth from what were most likely the mortal remains of the transmission, not to mention that it was irrelevant because even if I could have successfully diagnosed the problem, there would have been nothing I could have done about it. Having seen a number of cars in my youth inexplicably heal themselves (really), we weren’t quick to let anyone know of our situation. We sat for a while, sort of dumbfounded. I restarted the engine and put it in gear, had a slight glimmer of hope as we lurched forward, then became resigned as the power slipped from the wheels with a sound like a trash bag full of empty beer cans being kicked down a flight of stairs. We made our calls. We gave our apologies to the seller with assurances that we were still interested and not flaking out, and contacted the auto club to negotiate a tow.

We were advised that we got a hundred complimentary tow miles. It would be close, and made worse by the fact that we’d continue south to the next exit before we turning around. Our driver was a nice enough guy—kind of like a child’s drawing of a tow truck driver with an accent that coaxed out my mild Piney twang. I tried to keep up with the conversation about towing technology while Jen tried to keep a cheek on the half-a-seat in the middle of the truck. We talked about the boat, and he offered to tow it up for a price, and even offered to take the truck off my hands if it came to that. Jen told her story about having to pack her family of six into a three seat tow truck once when she was a kid, and the driver had a laugh sharing stories about similar things that he’d done.

You might think that the auto club would tell the driver that he’d be doing a tow from Maryland to New Jersey and that he might need to show up with more than a quarter tank of diesel, and you might also think that they’d mention to their customer that the tolls aren’t covered, or that they’re like $15 a piece in a tow truck, but you’d be wrong on all counts. We stopped in Elkton to fuel up and grab snacks, but not to drive around the toll on the Maryland/Delaware border. I was momentarily excited when I realized that there wasn’t a toll at the Delaware Memorial Bridge when traveling northbound and that we would be getting back into New Jersey, but that was soon doused. 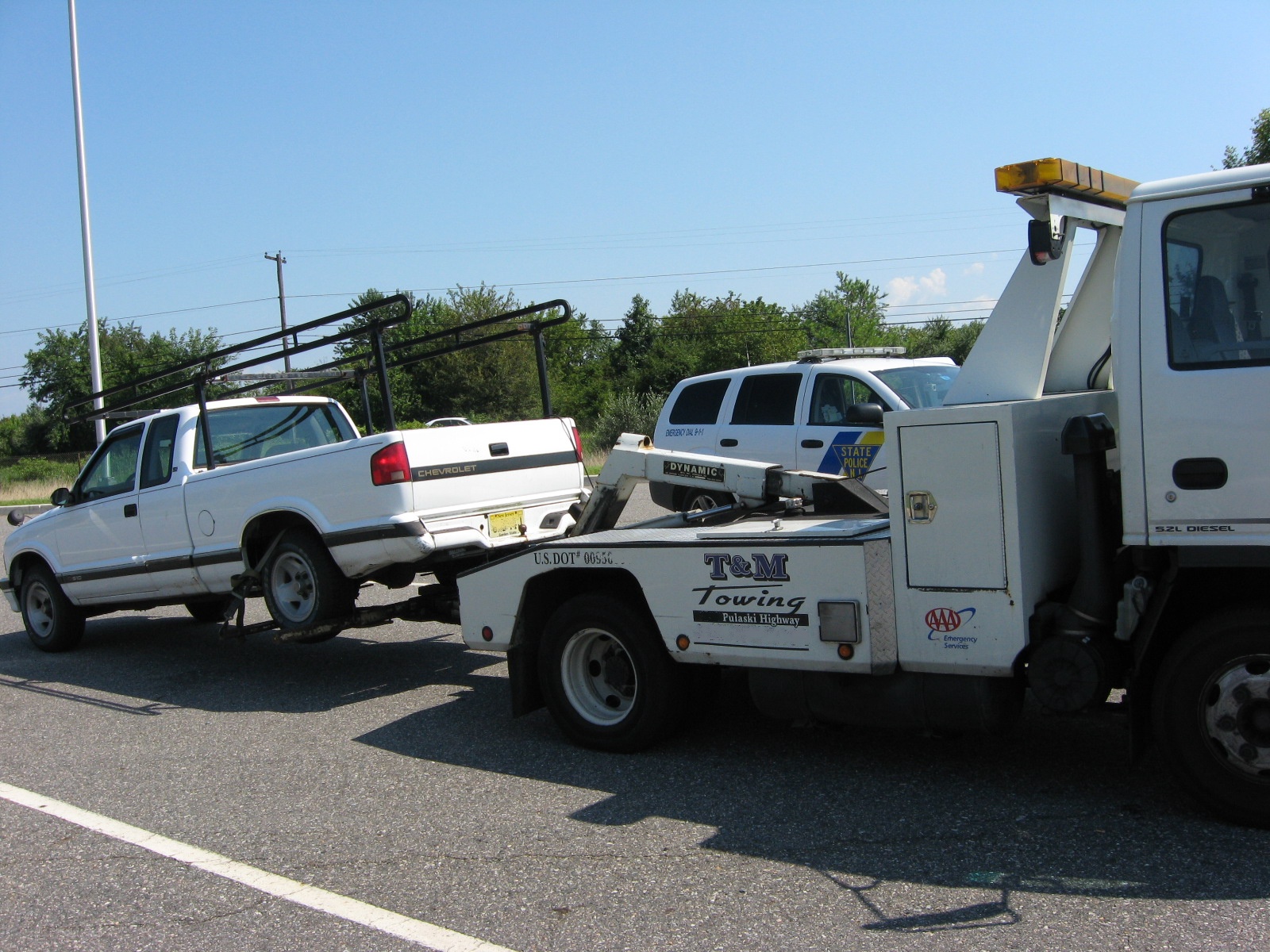 I have no idea what the rules are regarding tow trucks, but it was a tiny little thing, and I have no idea why the driver decided to go into the weigh station. We didn’t fail on weight, but were still instructed to go into the parking zone for inspection. We instead went to the inspection zone for parking and Jen and I jumped out of the truck immediately to hide the fact that she wasn’t wearing the useless and hidden lap belt on her half seat. Since we were in the wrong area and leaping out of the truck for no apparent reason, the troopers got pretty antsy, but took no action other than to declare “You’re not taking that rig in here.” With no further instruction we nearly got into the correct portion of the parking lot and waited for the other trooper to roll out in his Suburban. He prefaced his request for commercial driving credentials with a warning that he was aware of our driver’s prior issues with not carrying his medical card, which, it turned out, just happened to be “in his other truck” that day. I started to wonder about the protocol when a tow truck carrying my dead pickup gets impounded. I mean, in addition to this excuse being less than one full step above “my dog ate it,” it was also pretty obvious from looking at the guy that he was more likely to pass the California Bar Exam on intuition alone than a physical examination. I really thought that we’d be calling in another tow when the driver accidentally discharged his fire extinguisher at the cop while he was trying to inspect it, but thanks to a compelling performance by Jen of her seat belt usage, the driver got off with a warning and we were able to successfully complete that day’s defeat.