After several days of 90° heat and clear sunny skies with mild winds, things turned abruptly bleak for our latest attempt at sailing Fortuitous. We arrived at the marina on Saturday morning with temperatures in the high 50s and strong easterly winds gusting to 30kts. We’d received word from our club’s commodore that the buoys were going in, but all we could see as we looked out toward the channel were white caps.

We were supposed to attend a party that night with our sailing club, which was many hours away, so I convinced Jen that we should at least take a short motorboat ride just to see if we could navigate the channel using the charting supplements that I’ve been building. We departed without even prepping the main.

As soon as we cleared the piling while backing out of our slip, a gust of wind caught the bow and got us turned around the wrong way. While attempting a quick 180 in close quarters to get us going in the right direction, the engine cut out. Everything was going great so far.

The engine fortunately restarted, although it didn’t want to go as slowly as I wanted to go while approaching the unmarked channel, so I had to keep calling up bursts of power followed by careful revving in neutral to keep it from stalling. This happened the last time we changed the fuel filters, and although I bled and bled the fuel system this time and ran the engine for what seemed like an eternity at the dock, there is always one bubble that I can’t get out until I’m being blown sideways through a marina in a near gale. At least I knew what it was, and was more annoyed than panicked.

When it finally came time to run the channel, it was video game time. I used the tiller like a joystick to make the little red boat on my laptop follow the tiny ditch from the lidar data that I’d overlaid onto the chart. The depthfinder got as low as 0.2 feet under the keel, which I imagine is within its margin of error, but we didn’t touch. 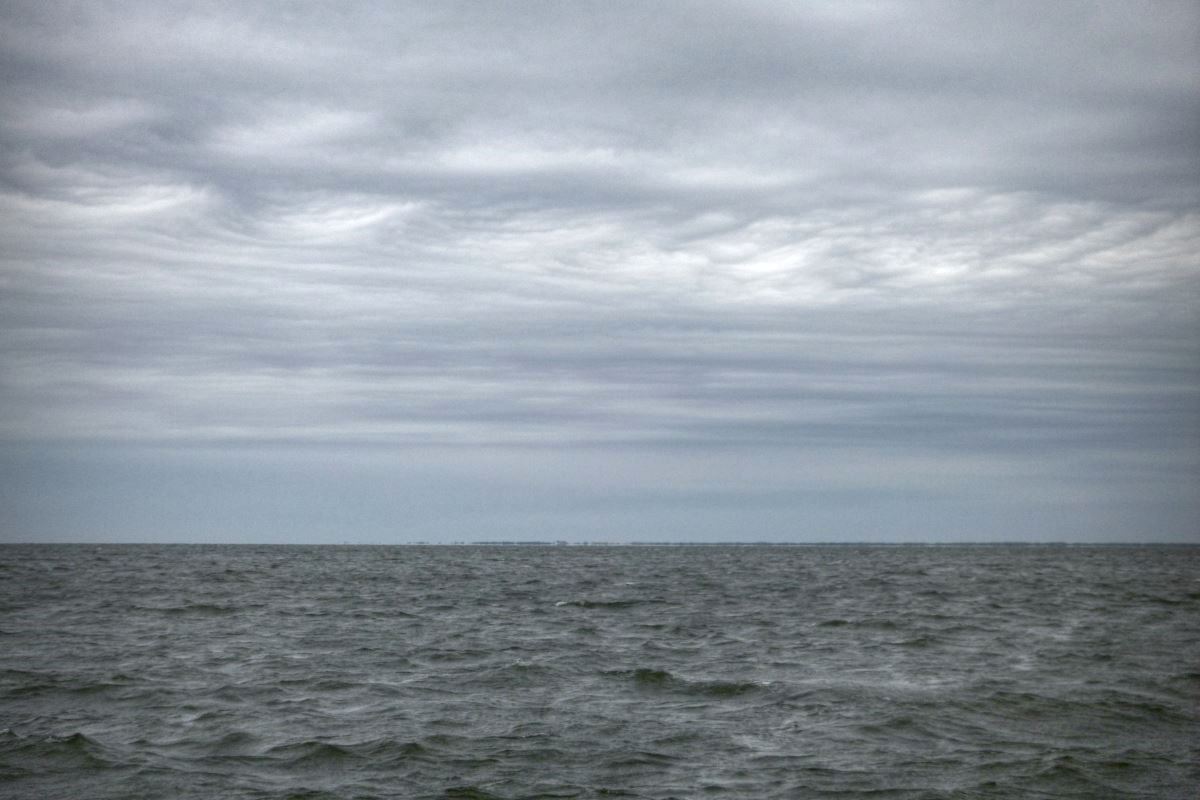 Once we made it to open water, we had to decide what to do with the rest of the afternoon. Conditions weren’t great, although with winds predominately from the east, the waves weren’t too bad. Motoring straight into them was tedious though, and kicking up quite a bit of spray. We hadn’t prepped the main, which meant that we didn’t have a reef in, and it was definitely reefing weather. Jen wasn’t keen on tucking in a reef while underway. We certainly could have done it, but I didn’t want to push too hard on a shakedown. We agreed to sail around a little bit on just the jib. It turned out that a partially reefed jib was enough to get us going nearly 6kts on a long broad reach down the bay. 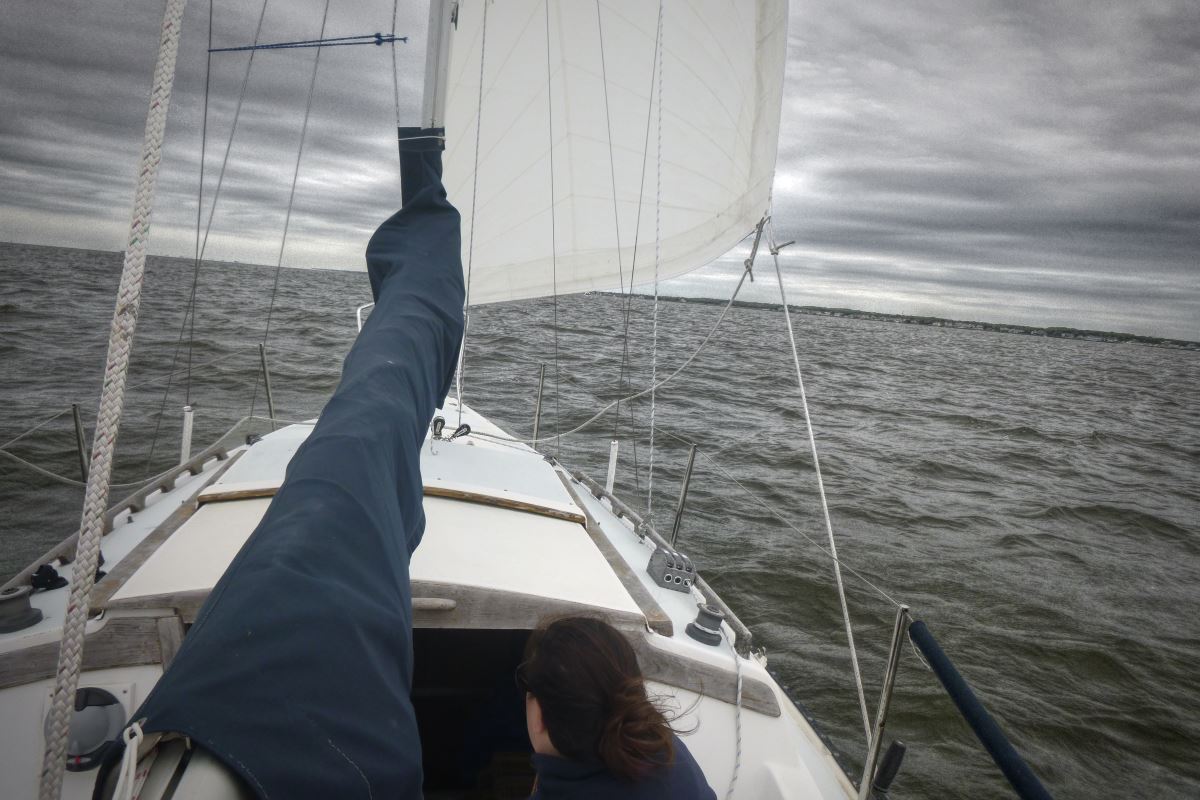 There was almost no one out—a couple sailboats and some fisherman. Sometimes it’s worth being out in questionable weather just to get the bay to ourselves. It was cold, and we considered turning around at BB (the Intracoastal Waterway markers are federal and are permanently mounted, so we don’t need to worry about the state not putting them in), but we kept going, eventually making it past BI. 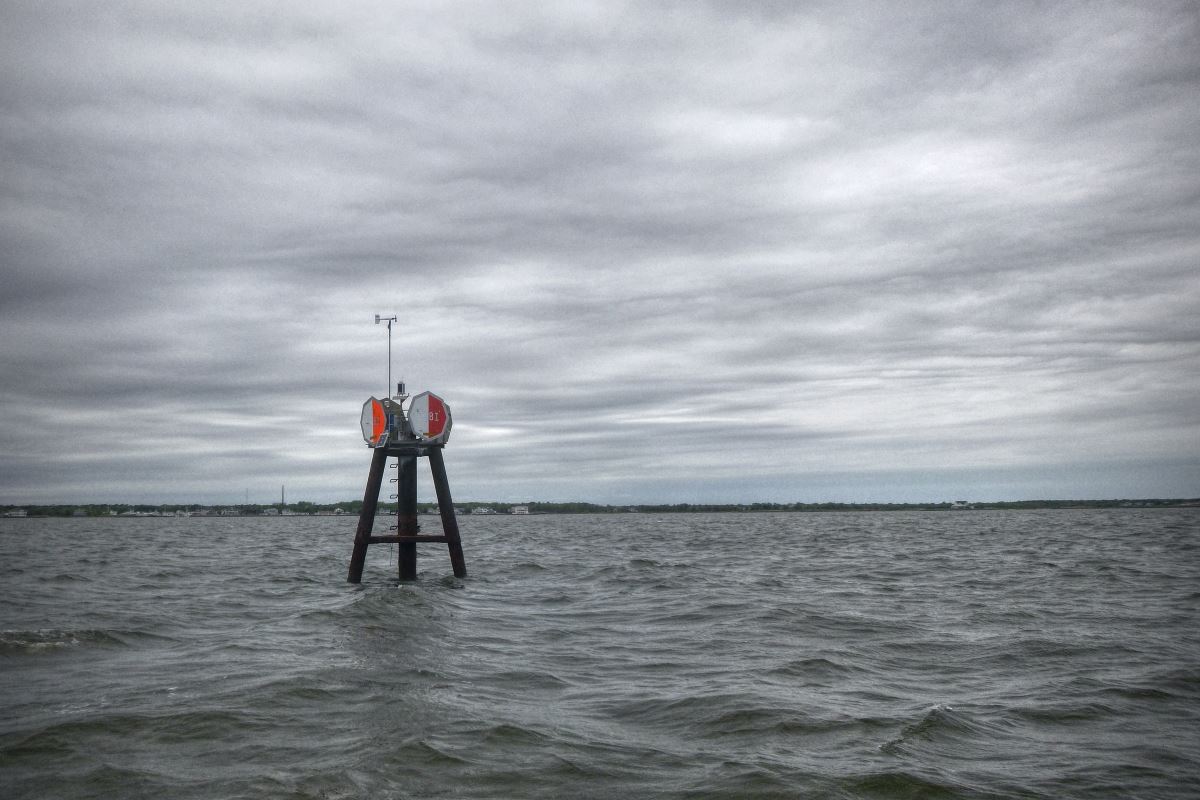 We came about just south of BI and started the upwind leg back toward Cedar Creek. I was concerned that we wouldn’t be able to point high enough without the main sail, or that we’d just be too unbalanced, but it turned out to be fine. It felt a little odd, but we made good time. We did have to throw in a couple tacks to avoid the shallows, but the wind had let off by then and the beat back was mostly comfortable.

Back at the marina, we prepared for our sailing club’s annual wine and cheese party. While this might sound like the pretentious behavior of a yacht club, I can assure you that it’s not. We belong to a sailing club, which differs from a yacht club in that our annual dues are barely into double digits. Our club’s idea of a wine and cheese party is a bunch of people standing out in the cold wearing foul weather gear and making up stories about the significance of the wine that they brought. I’m not that into wine or public humiliation, so Jen and I stuck with the “cheese” portion of the event, but we did get to mingle with some sailors.

This year’s festivities also included a “blessing of the fleet.” This is something that is done by a lot of yacht clubs, but not something that the Windjammers have ever done, at least not since I’ve been a member. While I believe that a fleet blessing often involves a boat parade, club officers dressed up in military costumes, and a religious character making the sign of the cross, ours involved someone with a minister’s certification that she got online, some mild swearing, and a long slug of Jim Beam. Much like wine and public humiliation, blessings aren’t really my thing, but I found this one to be appropriately inappropriate.

Maybe I should take whatever I can get when it comes to blessings. Jen and I aren’t terribly superstitious, but we’re not above the occasional pagan rite, and these last 5 or 6 weeks of not sailing were starting to seem like a punishment from an angry sea deity. I’m glad that we finally got out there. I’m glad that I know how my engine works, even when it’s not exactly working. I’m glad that we’re not threatened by 30kts of wind and can enjoy the bay in her sometimes raw and blustery glory. Whether the blessing helps or not, I’m glad that we’re back.