From the Latin audentes Fortuna iuvat. I actually said this to Jen while going around and around on whether we should go on this trip. She had put a lot of work into preparing for us to sail to Beach Haven with our sailing club on Memorial Day weekend, and I had done a lot of obsessing about the weather. The plan was to sail there on Saturday, stay on the boat for two nights, and return Monday—about 5 hours in each direction—but there was a lot of rain in the forecast for both sailing days. We’ve done this trip several times now (with varying degrees of success) and our boat doesn’t have much to protect us from the elements, so the idea of spending several hours sitting in rainstorms to go somewhere that we’re not that into as a destination was tough to accept. When we woke up on Saturday morning, the forecast had dropped to a 20% chance of rain on Saturday, so we decided to give it a shot.

One of the other complications to our decision making was that we weren’t sure if anyone else was going. When I called to make slip reservations at the Beach Haven Yacht Club, they sounded like we were the only ones who had called, and that was only a week out. We’ve done the sail alone before and didn’t need to go down with a flotilla, but there didn’t seem to be much excitement from the club. In previous years, a list of boats that were going was circulated and someone would be appointed to be in charge of the cruise, etc. Our cruising chair can’t make this trip anymore because his mast won’t fit under the new, lower, Manahawkin Bay Bridge, but we found him at the marina and learned that two other boats had already left a couple hours before. I’d planned our departure around trying to catch slack water at Beach Haven for easy docking, so we continued to load-in and prepare the boat at a leisurely pace, and left around 10:40. 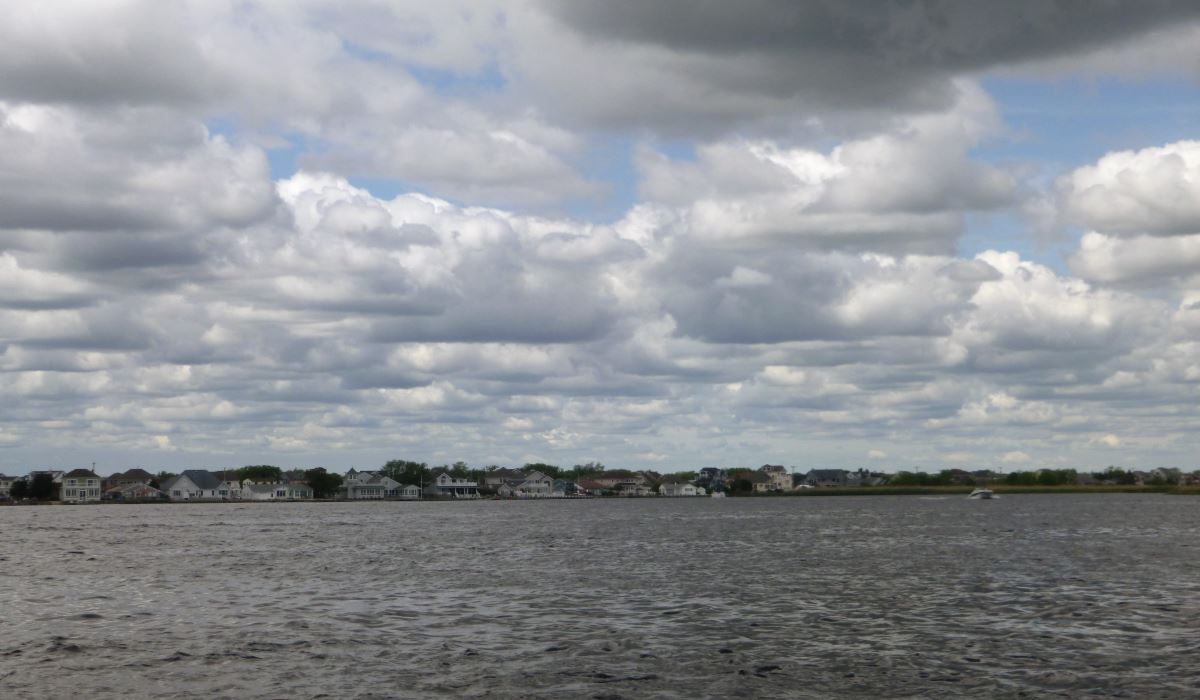 We had a nice sail down the bay, but had to run the motor when we got to marker 42 because the wind was on our nose. We would continue under power the rest of the way, with the mainsail up for stability. Jen did a great job of navigating us, and we practiced having her give me a number of degrees to turn and me sailing by compass. I spoke with an osprey couple at marker 48A who had incorporated a novelty hot pink Hawaiian lei into their nest. Aloha, osprey. 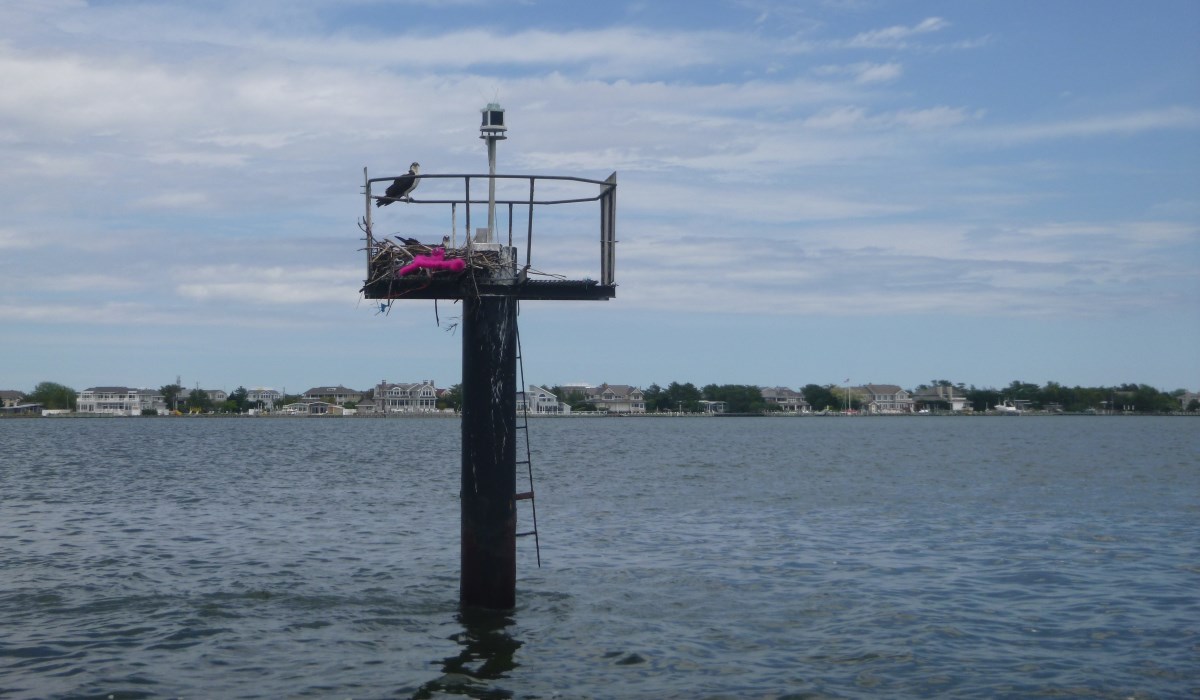 The rain mostly held off. The clouds packed in as we approached the bridge and the sky became overcast, but we could have counted the total number of raindrops that fell on us along the way. It was cool, and I was surprised to be wearing a wool shirt under my foulies, but we were comfortable and content as the engine chugged away the miles. 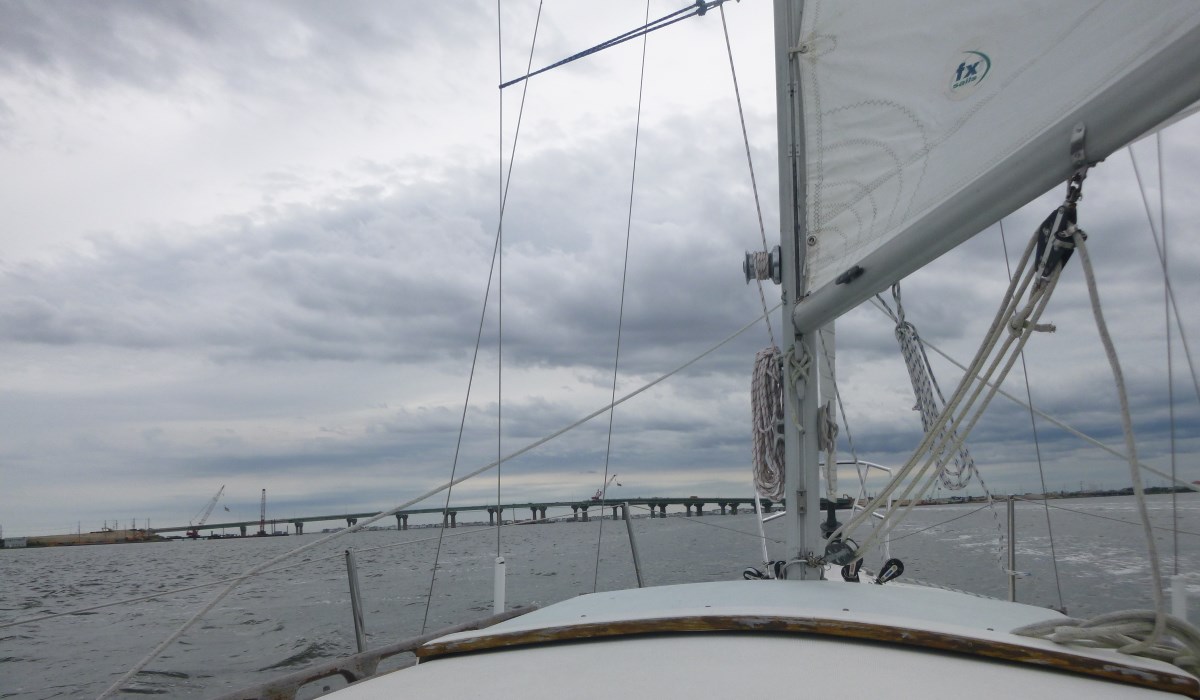 We called the marina at marker 98 and got our slip assignment. I was a little nervous about docking because we were in a slip that must have been 70 feet long—the kind that would have accommodated two Windjammers boats if more people from the club were coming—but the current and wind were light and we got a lot of help from the crew of Sunset and Stormy Petrel, who were on hand to help walk the boat most of the way once we were close enough to heave lines. We’d made it there in about four and a half hours.

It was determined that there wasn’t a critical mass for a dock party, so Jen and I went for an early dinner at a nearby restaurant. We couldn’t remember whether we’d eaten there before, but through the magic of the boat log, I know now that in 2015, I described it as “an overpriced B- dinner…where Jen and I got stuck in a snark loop—just the bit about the laziness of their decorations probably amounted to fifteen minutes worth of material between us.” The food was better than we remembered it, but that was possibly due to the fact that we hadn’t eaten anything all day.

After dinner, we wandered around Beach Haven. We played mini golf at Mr. Tee’s Golf and Arcade, the (in my opinion) superior mini golf course. Having already blown the “I pity the fool who can’t have fun at Mr. Tee’s” joke several years ago, I have little to say about it except that Jen and I somehow tied. The course we played had changed from the Teeki Course [sic] to the Pirate Course, which was apparently more difficult since Jen and I were far off of our previous scores. I blame the scourge of piracy.

Usually, mini golf and eating out are reserved for our day of shore leave on Sunday, but we were concerned about the weather on Monday. The chance of thunderstorms was ticking up with every forecast, and we were strongly considering sailing back on Sunday. We met with Stormy Petrel and Sunset, both with far more seasoned crews, and talked about what they were doing. Sunset was mostly interested in catching the bridge at low tide. The Causeway has been officially considered structurally deficient since 2004 and they’re building a new bridge beside it. The Coast Guard’s Local Notice to Mariners indicated that there’s a “containment system” under the old bridge that was making the clearance lower than usual. It looked like a bunch of wires strung along the span, and on the way down, Sunset hit every one of them with their antenna and took out their wind indicator.

To make the bridge at low tide, Sunset would be leaving very early in the morning. Stormy Petrel would likely go with them. Not only is “very early in the morning” a terrible idea for Jen and me, but that would mean sailing during the most probable periods of rain and thunderstorms. We delayed our final decision to Sunday, but I was pretty sure that we were going to opt for clear skies and a nice steady southeasterly breeze to blow us back to Cedar Creek.

We went to bed relatively early, as we often do on the boat. The enormous powerboat across the dock from us decided to turn on their floodlights around that time, and the enormous powerboat next to us inexplicably dribbled water out of its side on a cycle of about 20 minutes on/2 minutes off with a steady peeing sound, so our sleeping situation was not ideal, but we both got some fitful sleep in before I got up at 8:00 to check on things.

There was a haze about the marina, and I thought we were going to have to choose between fog or lightning. No one wants to sail in an electrical storm with a 40′ aluminum mast, but I’ve been extremely wary of fog since our delivery. Fortunately, the light mist burned off quickly and was replaced with bright sunshine. The forecast was up to an 80% chance of thunderstorms Monday morning, right when we’d be leaving if we left with the fleet, followed by light winds from the north, meaning more motoring. I really wanted to sail. Jen and I talked it over and decided that we were going to leave that day and not push it until Monday. I try not to dabble in cliché, but while fortune may favor the bold, sometimes discretion is the better part of valor. 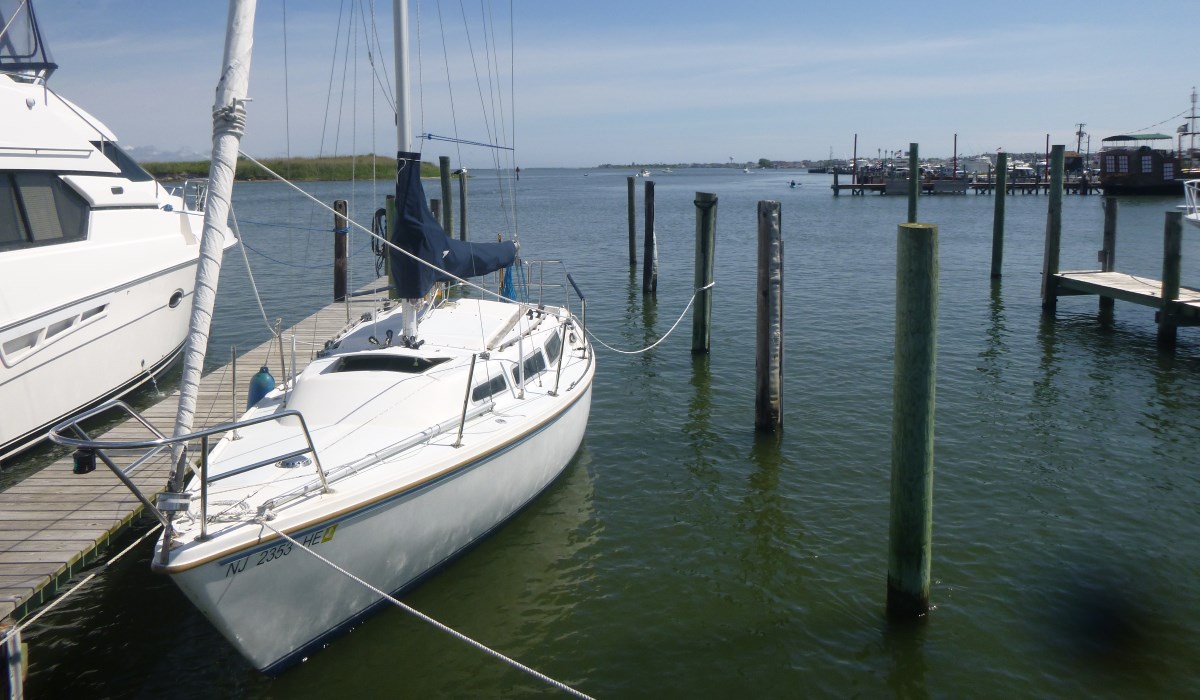 Jen prepped the boat while I topped up our diesel tank. The owner of the pissing powerboat was watching curiously and asked me how much fuel I’d purchased.

“How far will that get you?”

I didn’t mention that at the fuel dock’s current prices, 150 miles would cost me $33 while his 160 miles would cost him $1100, or that I was going to sail home using about $0.75 worth of diesel, since our range is basically limited only by food and water if the wind is right. Or that my boat isn’t incontinent.

We shoved off around 10:30, with Stormy Petrel’s skipper helping us get out of the slip. I was a little nervous about having to back out of such a long slip, but again, it was unfounded. The current was with us, so all we had to do was remove the lines and the water gently whisked us out with the motor idling in neutral.

We put the sails up as soon as possible and started following the winding channel back toward cedar creek. Parts of the southern section of the channel take you very close to the houses on the bay side of Long Beach Island, so we were somewhat sheltered from the wind, but we had enough to keep moving.

The sailing was somewhat technical: at each marker, a turn in the channel meant that we had to re-adjust our sails, but the wind was light and we’ve sailed this before. The wind direction was such that we could sail the whole way though, and didn’t have to use the engine except while going through the bridge.

When we got back into the bay, the wind picked up and we were treated to a somewhat more invigorating sail back to the creek. We made it in four and a half hours, making this our fastest round trip ever at just 9 hours. 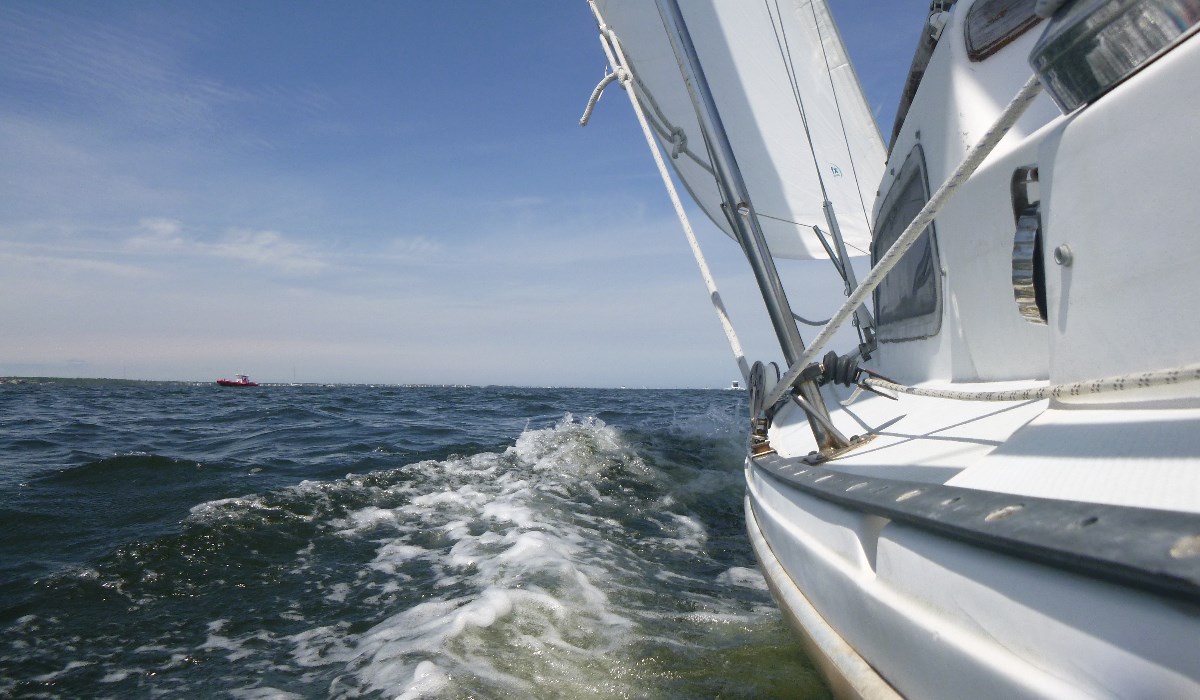 I’m at a loss to describe the sailing part, mostly because nothing went wrong. It was a little complex, but we pulled it off well and had a great time. At this point in our sailing careers, it’s no longer about which rope to pull when, but deciding things like when to go. We agonized about the decision to venture out and the decision to leave early, and defied more experienced sailors in both regards. In this case, I think our decisions were right: being bold when we needed to be and cautious in the face of likely miserable conditions. It may have been a day short, but we had a fantastic couple days sailing Fortuitous.

More photos are in the gallery: /gallery-beach-haven-2017