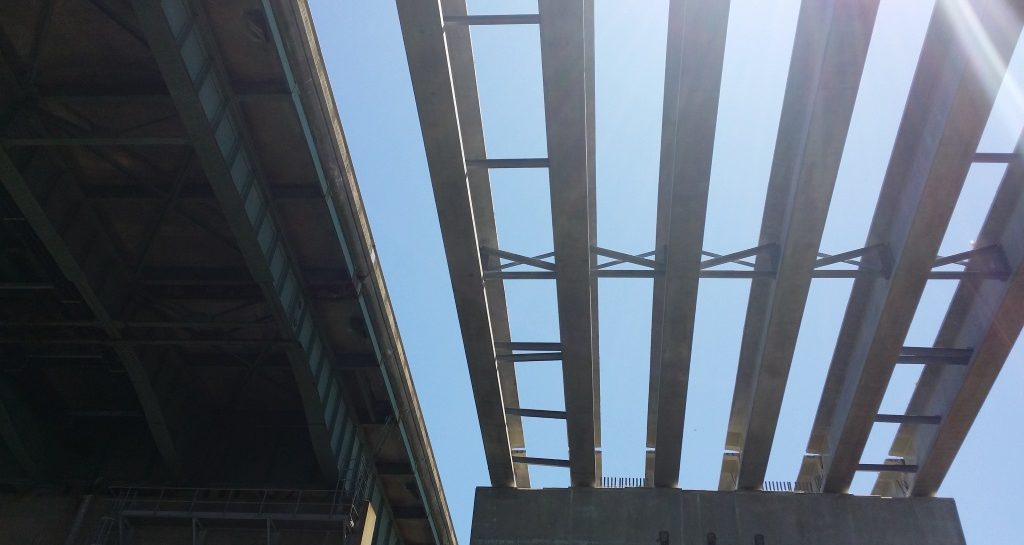 This weekend we took our annual cruise to Beach Haven with the Windjammers Sailing Club. We were two for four going into this event, and 2015 would be the year that would tip this into a mostly-losing or mostly-winning endeavor. To recap:

We took off on Friday to collect supplies and finish off the last few bits of critical maintenance. After enduring one more run to the boat supply store, another spelunking expedition into the port cockpit locker, and a swarm of gnats that may have actually bitten my last nerve, I think we may have completed it. Well, “complete” may be overstating it, but it was as complete as any project can be that ends with you slapping yourself in the face, swatting at bugs that became invisible somewhere between nautical twilight and astronomical twilight, and asking your wife to just hand you the duct tape.

At least we didn’t need to drive home and back. We slept on the boat in preparation for a morning departure to Beach Haven.

On land, I have a hard time waking up by the time that most people have been at work for an hour, and I definitely don’t want to talk to anyone or anything before noon, but for some reason, even after only one night, on the boat I adopt some kind of caveman-like affinity for the sun and wake up at dawn. I went for breakfast and coffee while Jen woke up and started prepping the boat.

We left Cedar Creek at 0900, hoping to catch slack water at Beach Haven around 1300 or 1400. The water levels were unusually low and we bumped in the creek, but were able to power through. The steady northwest winds were probably contributing to the water levels, but made for a great beam reach down to the end of the bay. 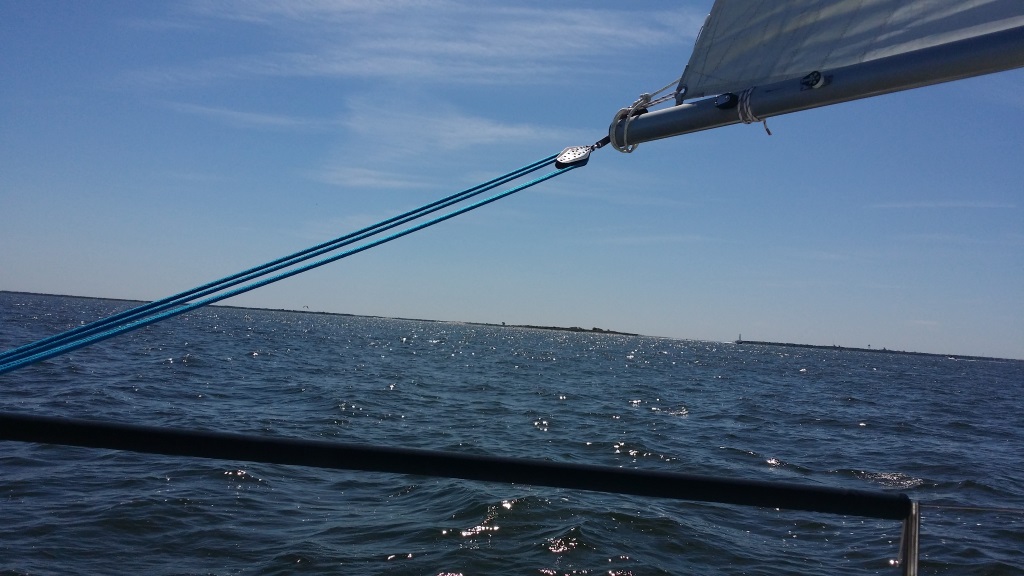 At marker 42, you have to make a hard turn to port and enter the narrow channel to proceed south. We tried to sail it but couldn’t quite make it work with the wind angle, so we doused the jib and fired up the engine. The rest of the ride down was delightfully uneventful, although we did see a few interesting things. 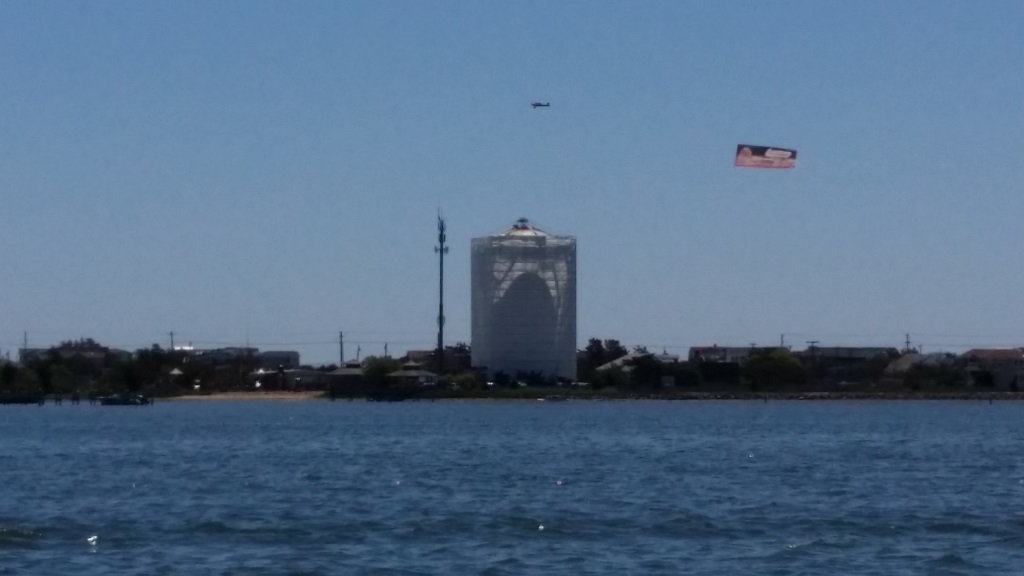 We had no idea what that was. From the ethereal shadow, it looked like someone tried to put a quarantine tent around a 50ft tall egg, but some quick research implies that this is just the Harvey Cedars water tower, cloaked for repainting. Apparently, the drop cloths required for such a project are quite intense.

We also got to see the progress on the new Manahawkin Bay Bridge. 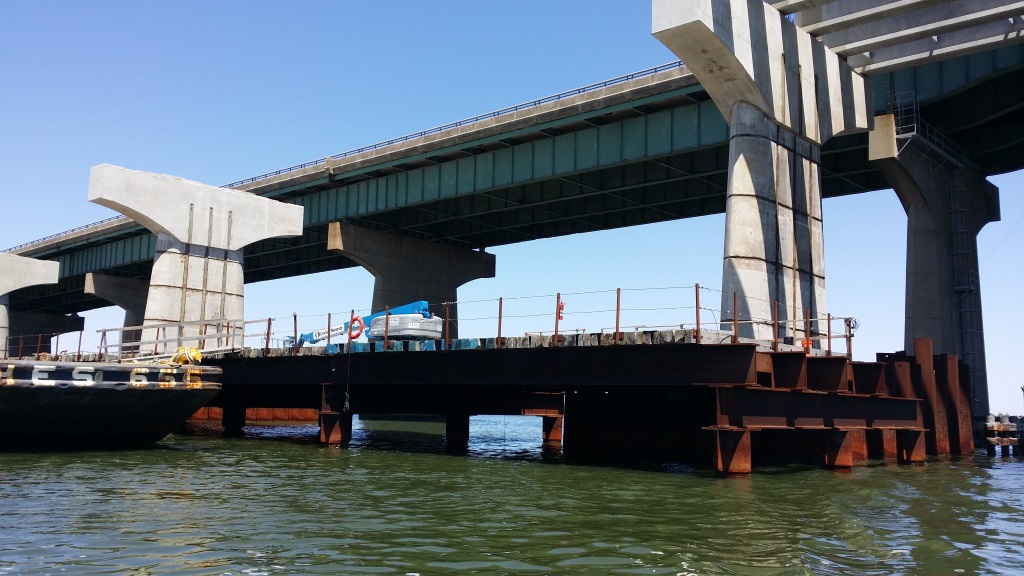 Some of our club members with newer, larger boats were (justifiably) nervous about going through, since the height on the gauge was about 3ft less than the charted vertical clearance of the bridge, but everyone made it.

As we moved south along LBI, the first seven boats bunched up. We had to consciously space ourselves out a bit as we approached the Beach Haven Yacht Club so that we wouldn’t overwhelm the marina staff by all trying to dock at once. That was a good plan in theory, although you can only do so many donuts in a busy port before you just start aiming at pilings and hoping that things work out. We were the seventh boat in, tucking in to a slip large enough for a frigate behind Offline. Our docking operation was thankfully unremarkable.

That evening we hung out with the Windjammers, and festivities wound down with an impressive display of drinking Fortuitous-supplied Bulleit.

Sunday was our day of dedicated shore leave. We mostly kept it low key, including:

Long Island Accent: Hey, eh, where can I get one of them flags?

Store Clerk Still Tickled by the Magazine Incident of 2015: What kind of flag?

Long Island Accent: You know…eh, one of them boat flags. With the stars and such.

Store Clerk Still Tickled by the Magazine Incident of 2015: You mean the American flag? 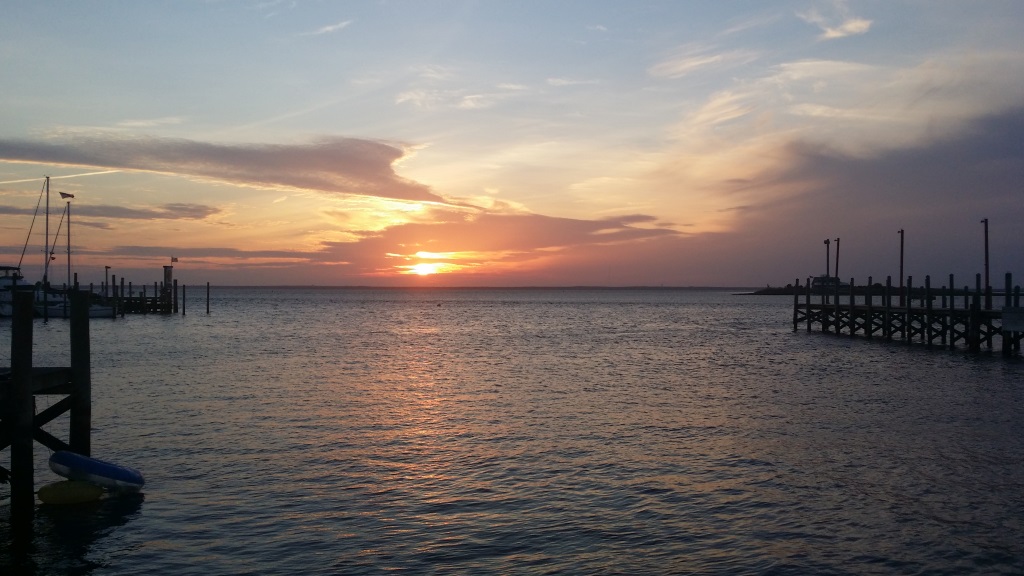 I was kind of counting on the Windjammers’ groupthink to come up with a departure time, but it never materialized. There was much discussion on how to catch tides and currents at their optimum, both at Beach Haven and at Cedar Creek, but nothing aligned neatly and I’m still naïve enough that I’ll go in anything—maybe it’s because I sail on the tidal Delaware all the time or maybe it’s because I have yet to be burned, but the current at BHYC has never seemed like a big deal to me, even since we’ve upgraded to an inboard keelboat.

We wound up leaving in the middle of the pack at 0920, with a lot of line handling help from the crew of Perfect Fit. We put up the sails as soon as possible, turned off the engine, and glided silently along the bayside houses on the western edge of Long Beach Island. The wind had shifted around since Saturday, and was now from the southwest, making for a smooth downwind run in light to moderate air. The channel zigs and zags quite a bit, so there were a lot of jibes, but wind from that direction meant that we could sail the whole way.

Moraira and Tiki both left after us, but shortly caught up since they were motoring on bare poles (and they’re just bigger, faster boats). Tiki got some rare photos of Fortuitous from a third-party perspective as they drove past: 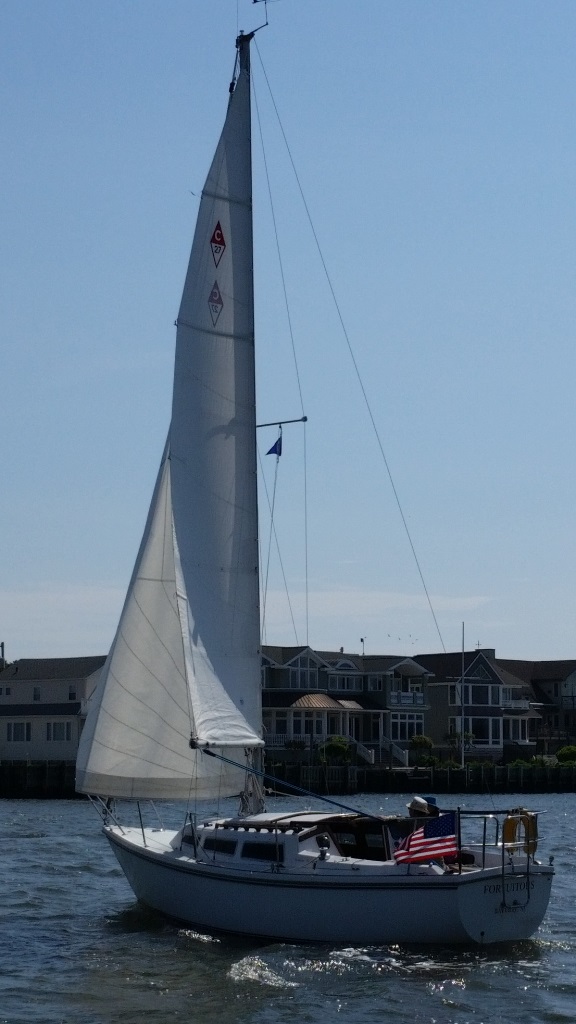 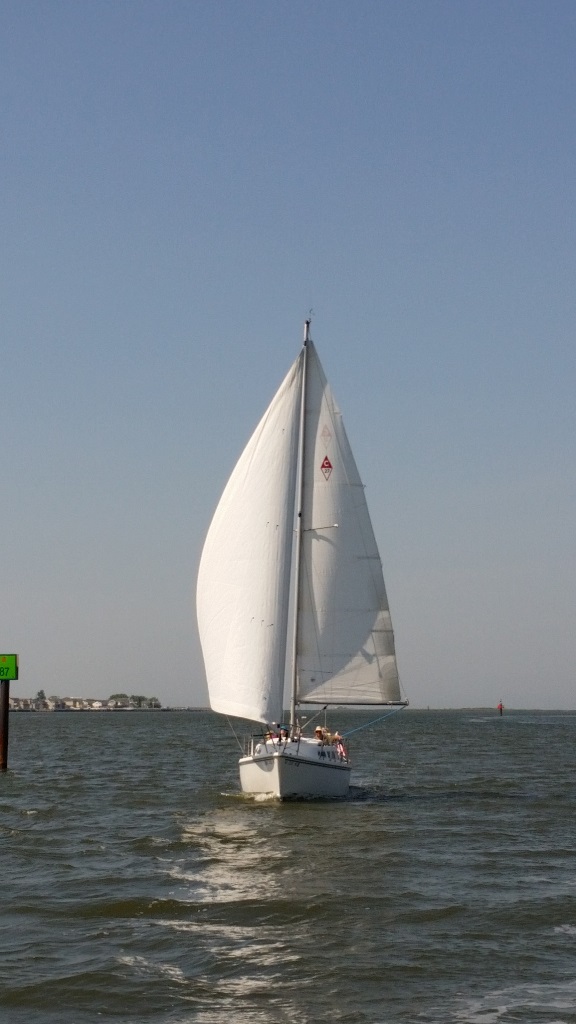 As we turned the corner around a small island near marker 84, we saw that Moraira had run aground just a few feet outside the channel. Tiki was lingering for moral support, but they draw about the same as Moraira and weren’t reasonably able to get close enough to do anything to help. We have about 8in less draft than either of them, so we dropped the sails, started the engine and prepared a line to try to pull them off. The crews of both boats handled the tow line well (i.e., they kept it out of our prop) and I know that we were pulling hard because we had that 50′ nylon line tuned up to Concert A, but their wing keel was dug in like a fluke anchor. After several attempts, the skipper of Moraira waved us off and called in the professionals.

The wind had been finicky and not all that strong, so since we already had the engine running we decided to just put up the main for stability and motor through the bridge, which was only about three miles away from there.

Tiki was making good time and was soon out of sight, but while we were motoring, we got within a mile or so of Stormy, who had left just before us and had sailed almost the whole way (except for a minor grounding of their own). Past the bridge the wind had picked up, or maybe we were just less sheltered out there away from the houses on the island, so we rolled out the jib and went back to sailing…and racing. Stormy was being skippered by perhaps our club’s saltiest sailor, and I wanted to catch them. I thought for sure that with a 48 second per mile handicap advantage, I’d be able to pass them at some point within the next couple hours.

There were so many broad reaches, it was difficult to keep our jib drawing—it was constantly blanketed by the main and there was no room to change course. We tried to use the whisker pole, but our pole has a tiny fitting on one side that won’t allow the sheet pass through it cleanly (and won’t fit on the mast ring). We got all fouled up messing with it, which cost us additional time. They were still ahead of us as we entered the bay, but I remained hopeful because we had more course flexibility once we were out of the channel, and could sail higher and keep the jib pulling. By that time, the wind had filled in to 20kts or so, and every mile north was another mile of fetch that had the bay whipped up into steep chop. As always, photography (or maybe our photography skill) lacks the ability to capture the nature of the waves, but maybe this is some indication: 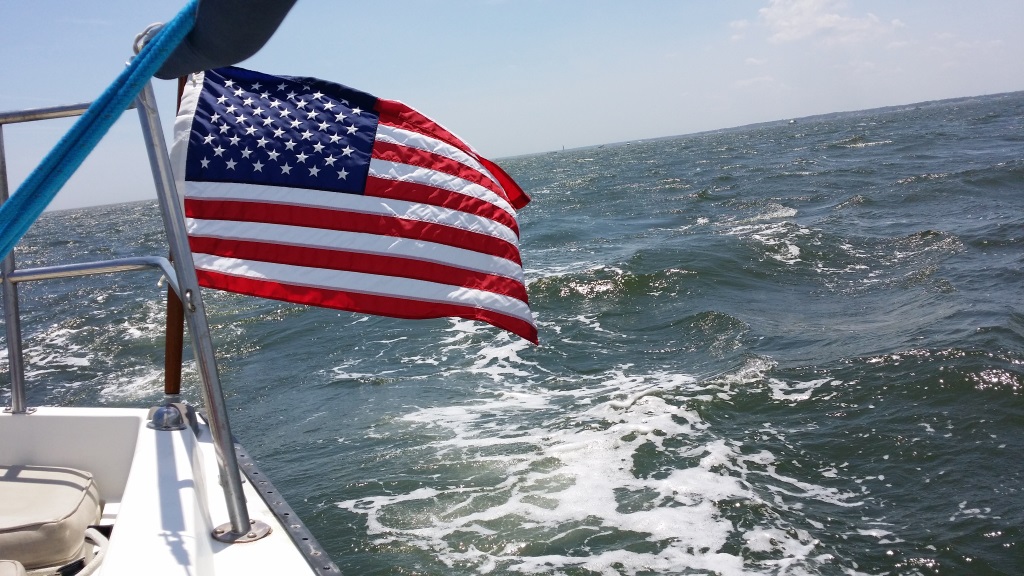 We were flat-out hauling, averaging about 7kts for an extended period of time. In fact, we did the whole ~24 mile run in under 4 hours, even though we’d spent most of the morning drifting along at 3 or 4 knots and stopped to try to pull someone off of a sandbar.

Alas, we never did catch Stormy. He’s a really good sailor, and I’m not ready to take that pebble from his hand. It was a fun run though. We were over-canvassed and my tiller arm was sore from working every single wave that hit our quarter, so we furled the jib just past 40 and conceded the victory (while Stormy sailed practically to the dock.)

As we approached our slip, our fellow Windjammers were on hand with boathooks and oversized fenders, seemingly prepared for us to slam into the dock at full speed. It was quite windy, even back at the marina, and we later learned that Tiki had had significant trouble getting into her slip (mostly due to low water). Our docking turned out to be a non-event and we eased in just fine, but it’s good to have people watching out for you, especially when your slip neighbor is a floating tribute to spar varnish.

All in all, I think we’re going to mark this year’s Beach Haven trip in the “win” column, which puts us above .500 for the first time since 2011. This is supposed to be an easy cruise—Beach Haven is far enough away that it warrants a little planning, but it’s not Tahiti—so I welcome the prospect of it becoming slightly more routine for us. We had fun, we had some relaxing time, and we sailed well, which is what it’s all about.