Setting numerous personal records for sailing and endurance, we have returned safely from our cruise to Beach Haven and had a lot of fun in the process.

Approaching Trixie’s at the ridiculous time of eight-something in the morning, the marshes and bay beyond looked placid. I remarked that it was going to be a slow sail down the bay, thinking that for once, the 5-10kt wind forecast might actually be correct. Jen and I were sick with anticipation. The annual Windjammers Cruise to Beach Haven is a three day trip that the hard-core offshore sailors consider a shakedown; for us it was going to be our biggest adventure ever.

It was pretty quiet at the docks, except for the one guy who was vacuuming the ground with a shop vac. Not the patio or a floor mat or anything specific, but the very earth. We’ve come to accept these sorts of things. If that guy could only run into Sandman—the Sisyphus of the random orbit sander. Anyway, the only other person stirring was a very cheery powerboater who had just put in his boat in for Memorial Day weekend. He was temporarily docked in Mark’s slip, which is right next to where we were making preparations at the end dock, and we made small talk about the first warm weather of the season and how great it was to have your motor start after a long winter. His started just fine, and he left a few minutes before us.

The southerly wind allowed us to sail off the dock again, which is an endless source of nautical glee. With the outboard in the upright and locked position, we glided away from Trixie’s on the main. Not too far into the cove, we came across the powerboater, who was having trouble getting his engine into gear. New source of nautical glee: sailing in circles around a powerboater. He seemed like a really nice guy, and it wasn’t anything personal, but come on… He flagged us down, and Jen called for help while I tacked and jibed around him. He actually got it figured out on his own before we left, so hopefully he had a good weekend too. We got the jib up in front of Berkeley Island and started heading toward the bottom end of our known sailing world.

Having left at 9:30 we were about an hour ahead of the rest of the fleet headed for Beach Haven, which consisted of eight more boats. We were easily the slowest boat, so a bit of a head start would theoretically allow us to arrive closer to the rest of the pack. As we got out into the bay, things were no longer placid. The wind was now more like 18kts or more. If I were a comic book character my super power would likely be an uncanny ability to disbelieve, and in this case there was a definite disconnect between my earlier assertion that there was no wind and my wet leeward rail. I think it’s safe to say that Jen was extremely unhappy, and I wasn’t able to maintain any sort of reasonable balance between heeling and pinching, so we made the decision to put in a reef. While no sailors saw us sail off the dock, as soon as our sails are flogging and we’re standing on the cabin top looking like we just randomly showed up on this boat Scott Bakula-style, here comes a Windjammer. Providence II, with her new Pentex sails, was screeching down the inside on rails. She was pointing probably 20° higher than we could, shooting directly down the bay without having to tack. At that point, we could just barely see other boats on the horizon that we assumed were the rest of the armada. On the reefed main and a jib furled down to about a 100 or 90, we were able to sit comfortably in the groove, and still made probably our best time ever down to BI, which also marked our previous furthest excursion south. 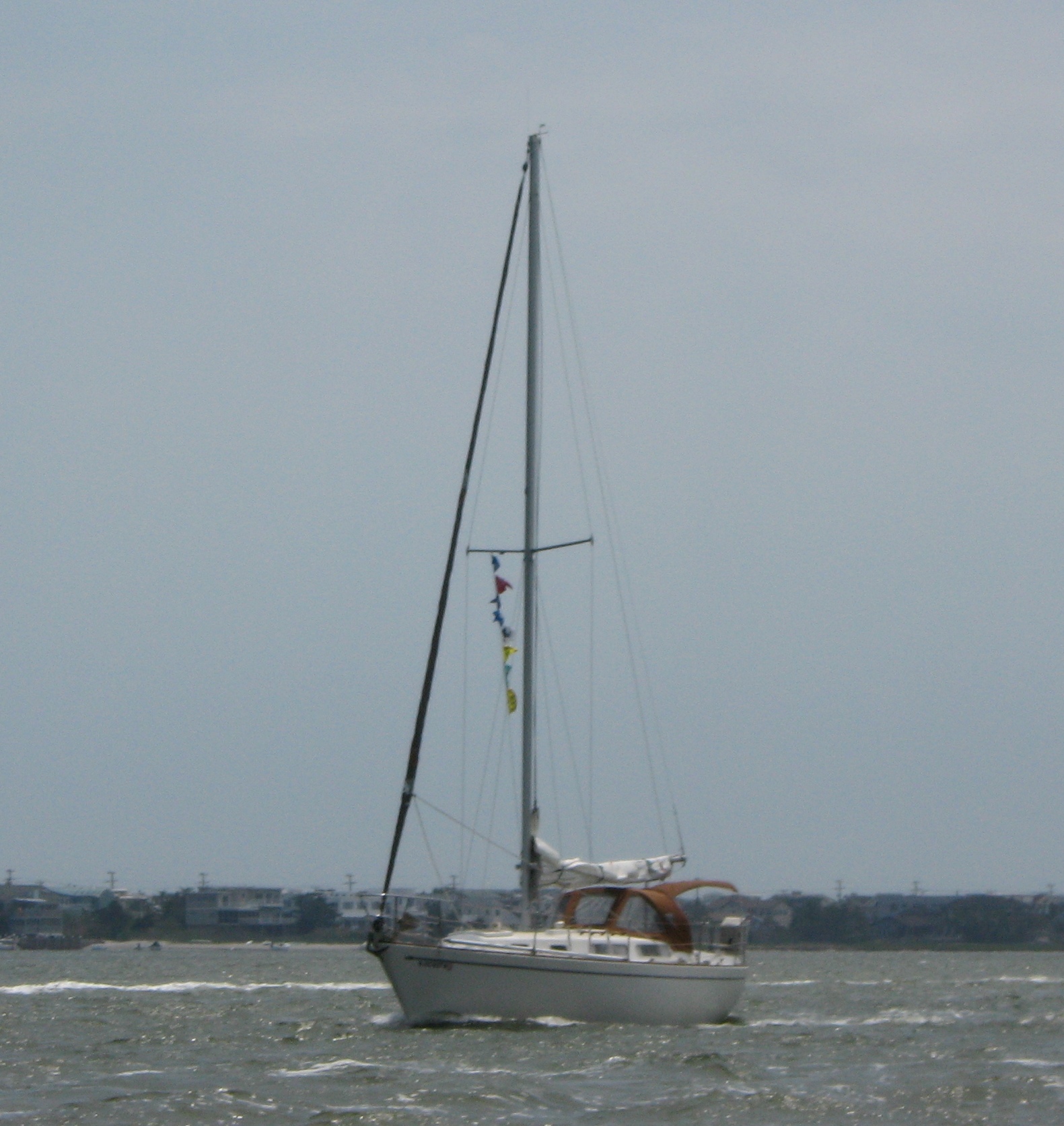 As we approached 42, we had to make a decision to either hang a left and follow the marked channel or to continue on and make our way around a shallow hump in that area (which several Windjammers claim is a myth, despite the charts). We saw a Hunter with a sugar scoop stern that we thought was Waterloo and attempted to hail them over the VHF, which turned out to be pretty dumb (Hey, are we looking at you?). Sashay heard us talking to Waterloo though, and responded that he was right behind us. They were heading toward the channel, which was good enough for us, and we continued going that way ourselves. Sashay soon passed us, and neither of us could point high enough to comfortably follow the channel around, so we both switched to motoring there.

The channel after marker 48 becomes very narrow and stays that way pretty much through Beach Haven, but following it on motor didn’t prove to be very difficult, at least in those conditions. Our new prop performed admirably, and we were able to nearly keep up at a moderate throttle setting. Sashay would pull ahead, but circled back occasionally to let us catch up, and the two of us made pretty good time, staying well ahead of the rest of the fleet. We heard Waterloo report engine difficulty, and Stormy Petrel hung back with them until they got the all clear.

A highlight for us was to go under the Manahawkin Bay Bridge (Route 72), which we’d driven over dozens of times to go to LBI. Jen was at the helm at the time and was a little nervous to navigate through the bridge, but she did great. After the bridge the channel heads back toward the island and winds past the bazillion dollar bay-front properties and the marshy sedges. The motor droned happily along, and the group didn’t pass us until about marker 94, which we thought was a pretty good showing even for having left early, since the next smallest boat in that group probably had 8′ of waterline on us. 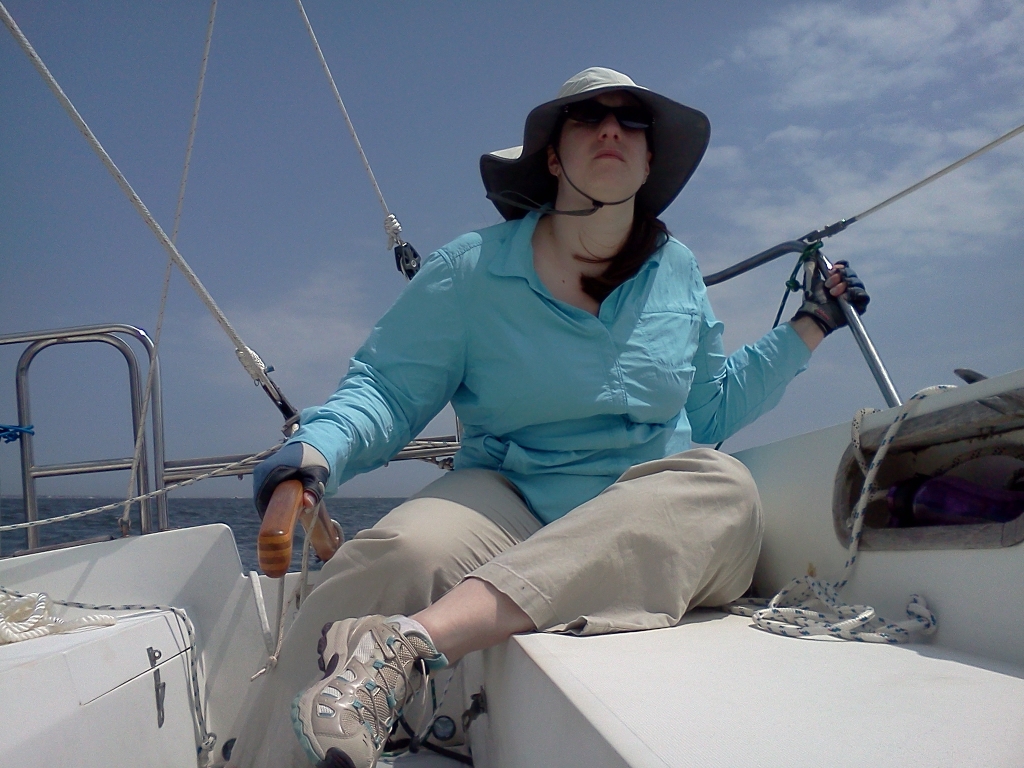 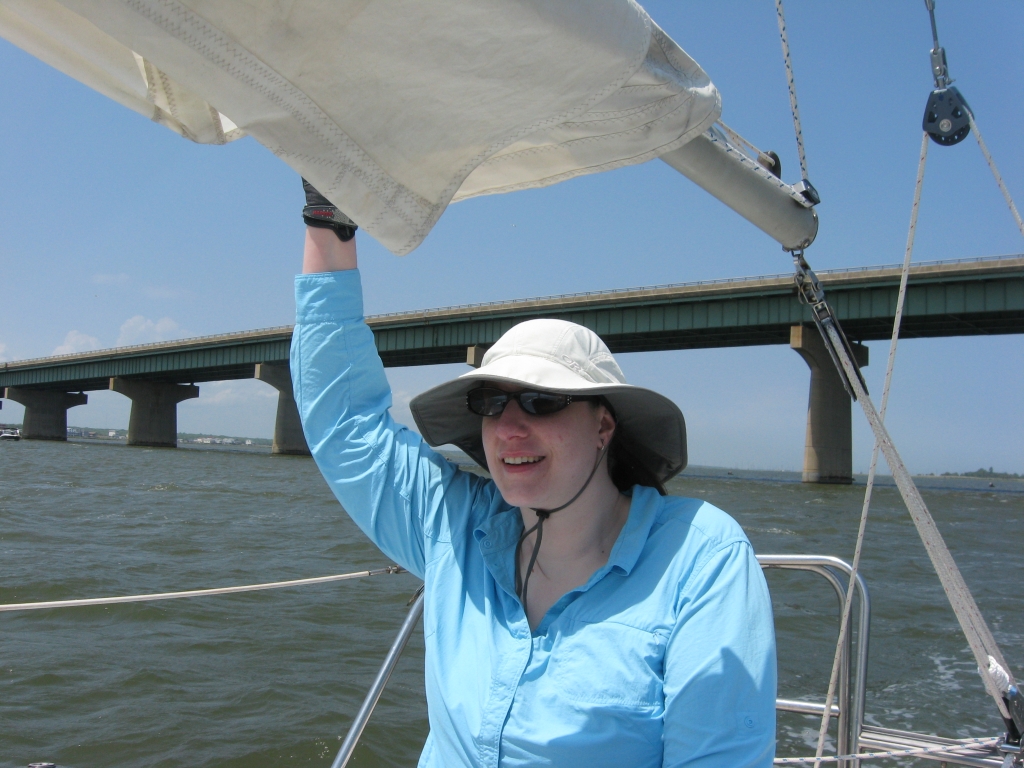 Sashay had pulled far ahead at that point, since our cruise leader/Vice Commodore wanted to get to our destination early and call out slip assignments. As we approached the Beach Haven Yacht Club, we received a series of directions, current notes, and encouragement over the VHF that got us to the dock. Having never experienced current before, I was kind of surprised at how fast we slipped, but with directional thrust and a high thrust prop, we fought it off well enough to wedge ourselves into the slip. I was very cognizant of our club’s Dillon Dock Meter award, which consists of a small wooden trophy with a bell hung from it. Theoretically, the award is given to the member who hits the dock so hard that it actually rings the bell in the clubhouse. When we got off the boat and found some Windjammers, they asked how our landing went, since they were on the other end of the marina in the deep water slips at the time. My answer, which I’m sticking to, is that if no one saw us, it was perfect.

We made the trip in 6 hours, and other boats came in before and after us with no major problems. Waterloo did eventually make it after confirming that their high temperature readings were an anomaly of the winterization process, and joined us and the rest of the club for an appetizer party at the dock.

The second day was a non-sailing day of general shore leave, so I’ll summarize the activities and findings:

Despite the discussion the night before about the difficulty of leaving against the current I was still planning to sleep in as long as possible, but it didn’t take a whole lot of thunder to get me out of the rack at 7:00am. My first thought was that this was going to be Cattus Island II. Waterloo’s radar was thankfully showing only a narrow band of fast-moving storms that would soon be past us. 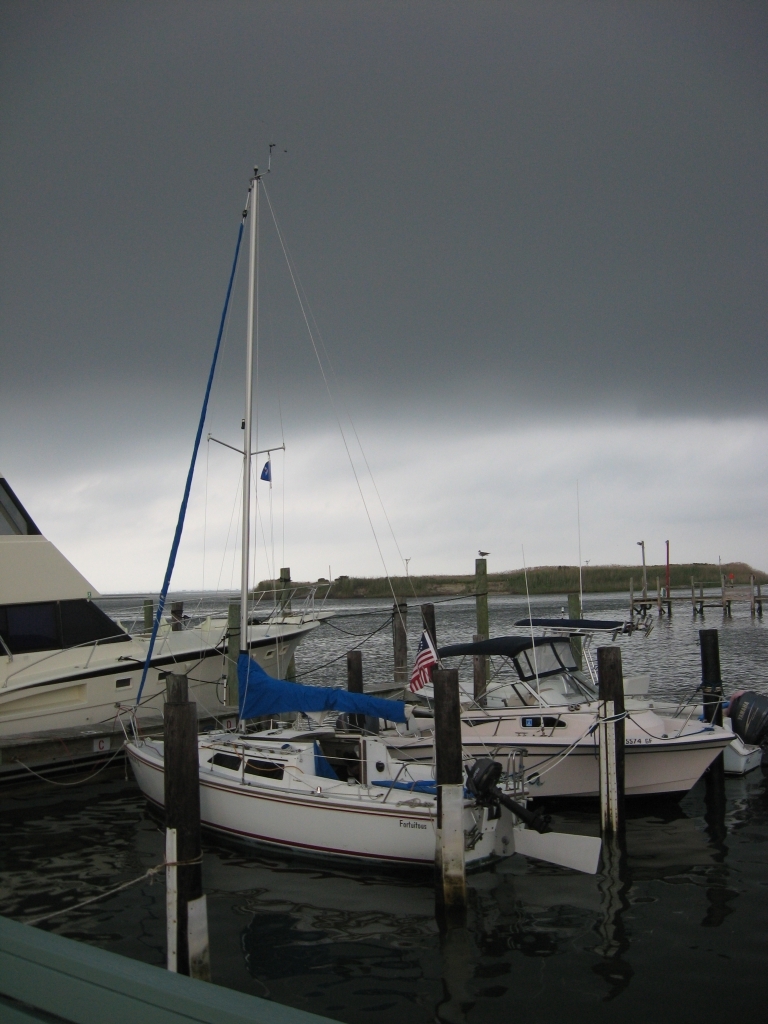 In the wake of the storm was a hot, humid morning with very light winds from the south and southeast. Two boats left immediately and we dawdled a bit, topping off our gas tank and preparing the boat for sailing. We were the third boat out, leaving around 9:30am, and decided to shut the motor off soon after leaving sight of BHYC. The current was with us, and there was just enough wind to keep our sail filled as we eased north along the channel. We started on just the jib to see how it would go, and eventually put up the main to catch a little more air, running wing and wing in the downwind legs and on broad reaches the rest of the time.

Dozens of slow jibes later, as we approached the bridge again, the light wind turned to no wind. We didn’t want to go through the bridge without enough speed to maneuver, so we used the motor for just a few minutes to push us through, then for a few more minutes on the other side when we drifted out of the channel in dead calm and started touching bottom. Other than that, we did the entire trip on sail, albeit at walking speed. 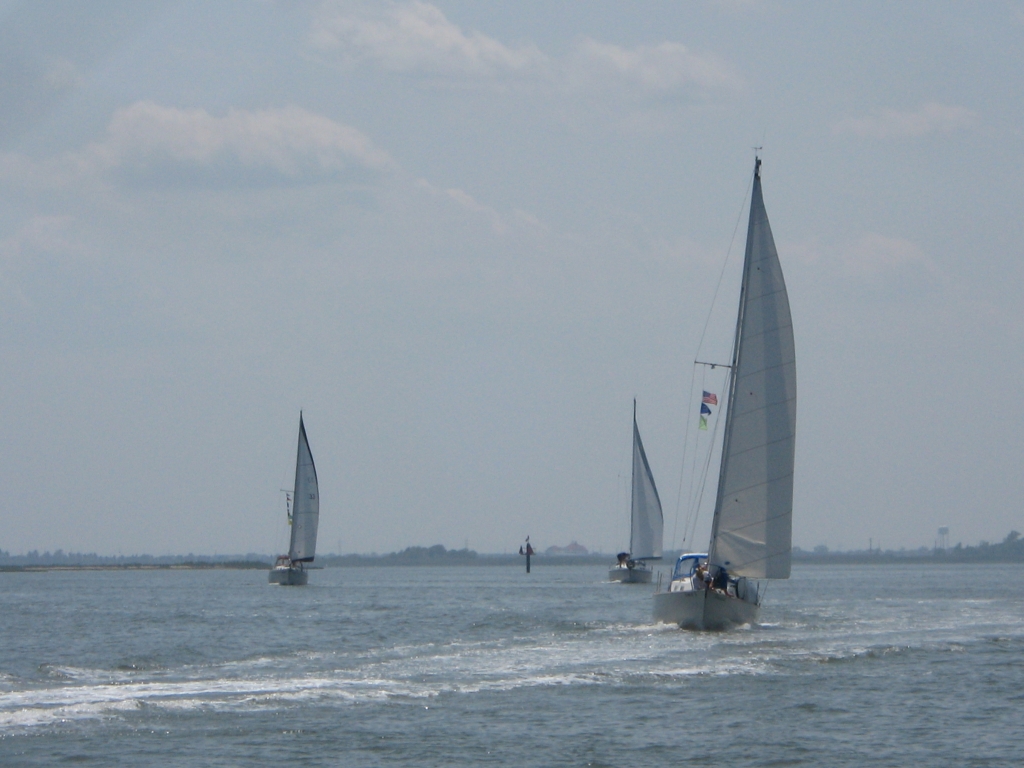 Somewhere around marker 60 we were passed by Tiki, Sashay, and April Star, all motor sailing (with the emphasis on “motor”). Tiki came by and asked if we were ok. It wasn’t clear if they thought that Jen was hailing them when she stood up to take some pictures or if they thought that we had heat stroke since we were creeping along under sail alone. But we were fine, and happy to not have the incessant drone of the motor.

Things got kind of grim between 48 and 47 when it was just too hot and there was no air. Jen was convinced that we were stopped, possibly aground, but I could see little channel markers (possibly to High Bar Harbor?) moving past each other from our point of view, and there was clearly activity in the water around the rudder, so we must have technically been moving. We held out, and eventually made it back into the main body of Barnegat Bay.

Although I think our boat speed was better once we got into more open water, the fact that we were in familiar surroundings again made the last legs seem equally slow. As we got up around BI, we saw spinnakers on the horizon behind us and figured out with the help of our $10 binoculars that it was Stormy Petrel and Sunset. 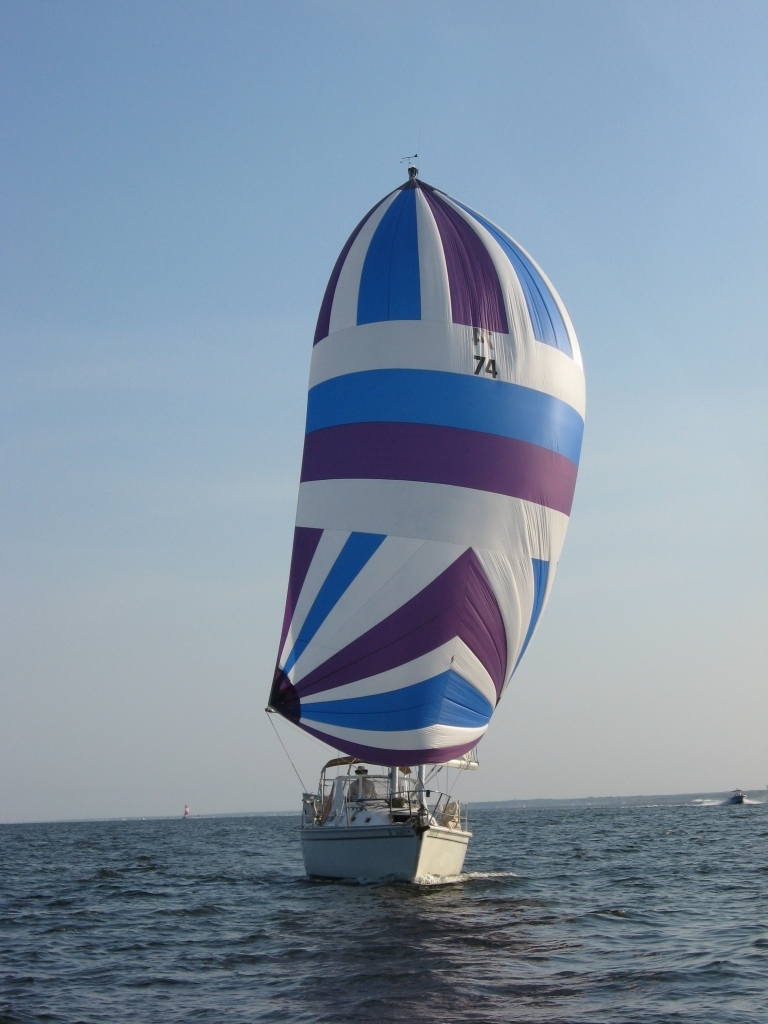 Sunset was hauling and caught us near 40. They came close as they passed and commented that we were probably the only two boats that had sailed the whole way back. They continued on and tucked into Berkeley cove. We followed them in and only started the motor again to take down the main and power back into our marina with the keel up. Although we were tired and it was an arduous process of putting the boat away, it went smoothly and we finished up our trip with a flourish, 9½ hours after we left, with the keel dead center over the roller.

We had a great time. There were no calamities, with only two applications of liquid bandage required. The Windjammers were typically laid back and friendly. We spent two consecutive nights on the boat and logged about 48nm according to my crude Google Earth ruler, the vast majority of which were under sail. Fortuitous performed admirably in a wide range of conditions, and I think Jen and I did a good job of sailing her.

Check out the rest of the pictures in the Gallery.