If the Windjammers call the cruise to Beach Haven a shakedown cruise, today was our shakedown shakedown. While we didn’t get quite as south as we had hoped, we accomplished all of our goals for the day.

We left in a rush after our keel cable and prop work last weekend to make it to the sailing club’s captains meeting/wine and cheese party, so we had a few things to tidy up before we could put in. With some help, I was able to get the trailer’s keel roller reattached, which was a prerequisite to launching. This seems like it would be trivial, but as with most marine activities, it was hard to do well for only 200% of the original time and cost estimates. 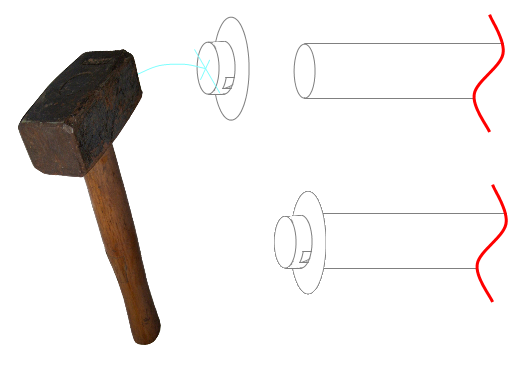 In the wake of the complete disintegration of our bow roller last season, I figured that if I was going to remove the keel roller to perform the keel cable maintenance, I might as well replace it with a new one. Of course when I tried to get the new one on, the replacement axle was about a half inch too short. Fortunately Berkeley Island Marine had one in stock, although it was about an inch too long. With an air-powered cut off wheel and grinder, that was quickly remedied. Then I had the problem of having to hammer the “pal nuts” (I didn’t know this term until I Googled for it) onto the rod in situ. I wedged a claw hammer between the one that was already installed and the trailer, and Kevin hammered the other one on without issue, despite not having much room to swing his hammer.

I also finally finished off the topping lift by adding a cleat below the boom as an end point. We had been borrowing the cleat for the reefing line up to this point, but eventually we’re going to need to reef.

But that day was not today. With winds in the 8kt range, it was pretty light and we were eager to get sailing. The last thing was to very carefully launch the boat and quickly get on it without getting too far from the trailer to make sure that the new radiator hose attached to the volcano wasn’t leaking (or gushing). Jen reported no problems, so we prepared to sail. I quickly replaced the fuel filter on the motor, but with the wind speed and direction, it turned out that we didn’t need the motor to leave. For the first time, we sailed off of the dock without the motor running.

The saltier among us will tell you that all sailors should know how to sail to and from docks, since there may come a time when when you’re having motor trouble or something and still need to get somewhere. And it’s true that before motors, all boats did this in one way or another. Considering, however, how crowded a lot of marinas are, and how much our insurance premiums would go up if we indiscriminately ran into all the other boats to and fro the trailer under sail as we learn boat handling, most people use the auxiliary for docking operations in all but the most dire circumstances. But on a slow day at the ramp and with wind light enough to not require our keel to be down, we took the opportunity to ghost silently away from the dock.

And then the world ended.

Oh wait…no, it didn’t. 6:00pm came and went (in our time zone, anyway (?)) without any noticeable rapture, despite the rantings and wasted advertising budget of a deluded minority. I usually avoid the topical in the boat log, but for the record: 1) I’m going to guess that the answer to the WWJD? bumper sticker is not “signage” and 2) if there would have been a metaphysical catastrophe, I’m glad that Jen and I would have been on our boat for it.

Anyway, apocalypse aside, we had a nice sail. Our goal was to sail south as far as we could get since we’ve never seen the entrance to the channel that goes south along Long Beach Island. With the wind directly from that direction, it was hard to make much headway in the time that we had and we flirted with the western edge of the bay most of the way down, tacking out only far enough to get us past the points and spits. We only made it down as far as BB before turning around, with storm clouds building to the north. We never did see rain and had a nice, if slow, sail back, wing and wing. People claim that the Catalina 22 is squirrely when sailing wing and wing, but we’ve never had a problem even with only moderate vigilance. And when you’re in the end times, I say sail it like you mean it.

1 thought on “Sail to Forked River”