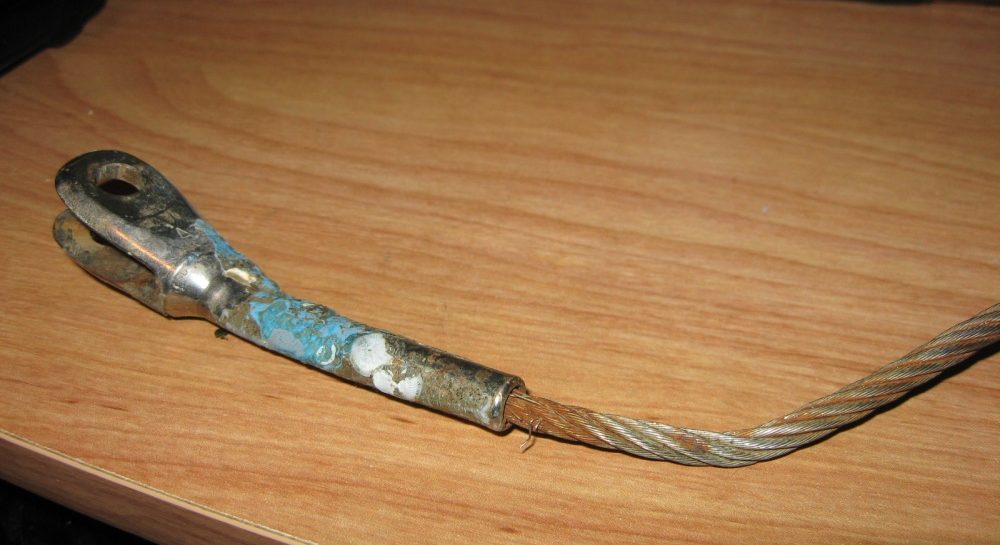 This weekend’s forecast is all rain and no sailing, so we took the opportunity to take care of some maintenance tasks that have been lingering. We’re gearing up for our biggest sail ever, a cruise to Beach Haven with the Windjammers, and we wanted to be sure that the boat is ready. 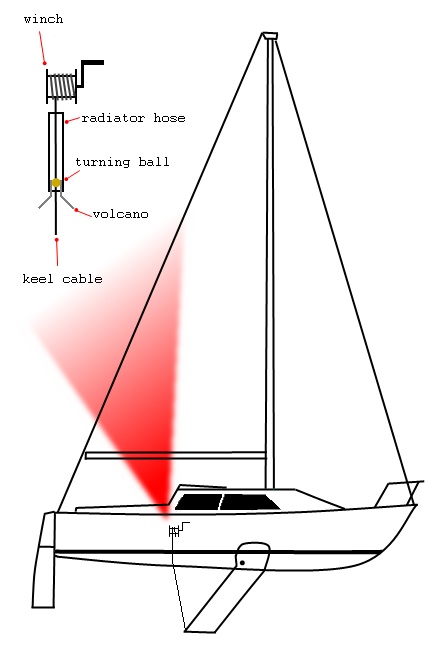 The keel cable is the mysterious device that attaches our heavy iron keel to the even-more-mysterious winch that’s bolted below the bridgedeck. One of the first pieces of advice that’s often given to new Catalina 22 owners is “inspect [or replace] the keel cable,” because a broken one can ruin your whole day. We actually went as far as to ask Santa for a replacement cable for Christmas 2009, but the replacement process seemed daunting. In the wake of other, more complicated repairs undertaken earlier this year, we built up the courage to give it a go.

Step 1:  Remove the keel roller on the trailer. There’s a roller just under the keel so that the cable doesn’t have to bear the whole weight of the keel when bouncing merrily down the highway. However, the roller on our particular trailer keeps the keel up too high to get to the eye bolt that actually connects the keel cable. The axle rusted solid to the end caps long ego, so I cut it off in a satisfying shower of sparks with a cutoff wheel.

Step 2:  Lower the keel and remove the the clevis pin that attaches the bottom fork of the cable. It’s pretty gross in there. The bottom of our boat is in embarrassing shape.

Step 3:  Remove the winch handle that a previous owner GLUED ON WITH SOME SORT OF RIDICULOUS MARINE SEALANT. Man, it’s just a winch handle.

Step 4:  Remove the weirdo paneling to reveal the winch and the volcano.

Step 5:  Attempt to remove the old cable from the drum without removing the drum.

Step 7:  Give yourself tetanus by perforating your hand 7,000 times with the cable. Holy crap. I’m not talking about an occasional meathook. Dealing with this thing was like trying to help a porcupine out of a cactus.

Step 8:  Remove the radiator hose. The bottom of the volcano is actually below the waterline, so this unassuming-looking rubber hose is all that keeps the boat from flooding with water and sinking.

Step 9:  Replace the turning ball. This is one step where I really had no idea what to expect. Our replacement kit came with a new brass turning ball, a delrin bushing, and a small steel axle. When I got the hose off, it was unclear exactly how to remove the old ball, which was badly corroded and didn’t turn at all. I eventually found that the axle does go all the way through the top of the volcano, but couldn’t tap the old one out because there wasn’t enough room to swing a hammer with a centerpunch. Not sure if this was the correct thing to do or not, but I used the new axle to tap out the old one from starboard to port. It turns out that the starboard hole (at least on my boat) is slightly larger than the port one, so hammering in that direction allowed me to tap out the axle without getting the new one seized in there. It worked great, and the new one actually turns so that’s good: video here.

Steps 11-42:  Oh, duh, you can’t reconnect the cable because you didn’t put the new hose in, so disconnect it and try again. Oh, duh, you put the turning ball in before the cable so now you can’t feed the swaged end through the volcano, so get out of the boat and feed it in the other way. Oh, duh, after making fun of a previous owner for not being able to use the obvious tie down for the cable you did it all backwards and need to clamp it down again. Once you get through the fairly basic logic puzzle, it actually goes back together pretty cleanly.

The old keel cable was obviously in pretty bad shape, so we’re happy to have gone through the process. 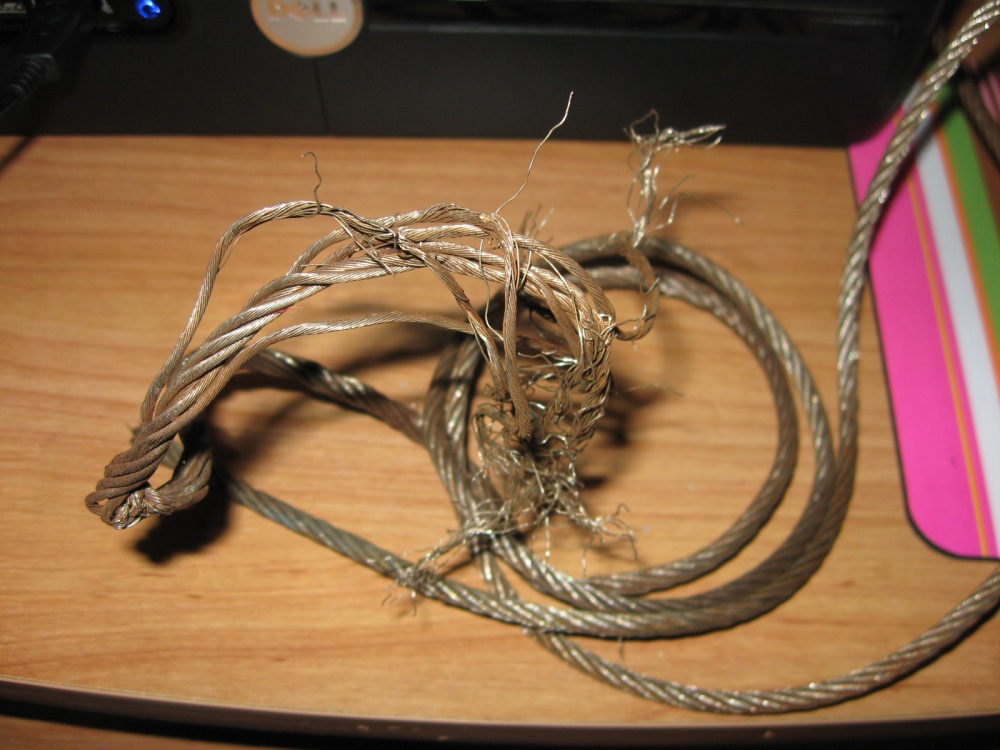 Fortuitous has a 5 horsepower Tohatsu outboard. While 5HP is plenty to bring a 22′ displacement hull boat to hull speed, most of the 5HP motor market is centered around pushing little rowboats and inflatables up on plane. The stock propeller is designed for general use, but leaning toward high-end speed rather than low end torque. There are a million sites on the Internets that go into the tradeoffs, but suffice it to say that we’ve replaced the prop with one of lower pitch and greater diameter and surface area, so it’s more like a tugboat prop than a speedboat prop now, which should be more suited to how a sailboat operates under power. 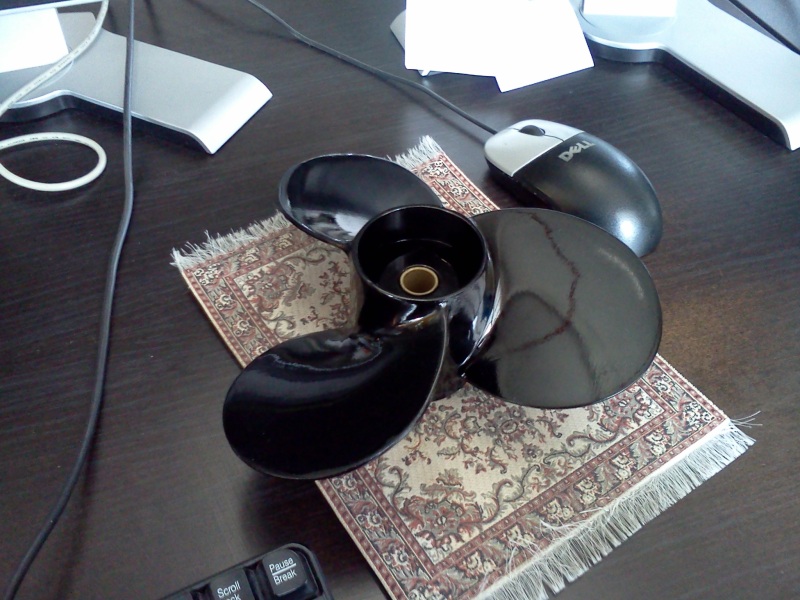 I didn’t take any pictures of prop replacement, so here is a dramatization for your viewing pleasure: 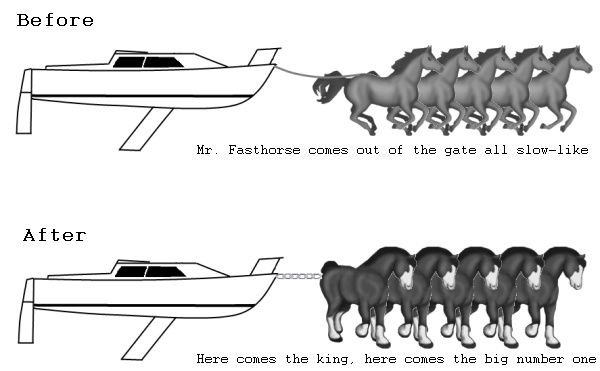