Jen and I had a fairly typical sail around the bay. The Windjammers had their instructional racing seminar in the morning and were having their practice races about the time we headed out. Jen’s not a racer, and we weren’t terribly interested in the practice race, so we skipped it, but didn’t want to waltz through their course so we headed north toward Toms River, following the race via VHF.

Jen took the tiller for a few minutes on the way up, but it was gusty and she wasn’t into it. After some minor screaming, I took over again and we continued until we turned the corner near 36 and saw literally dozens of little sailboats in the mouth of the river. There must have been a regatta, so we tacked around and headed back. The Windjammers’ race was over by that point, so we cruised past Cedar Creek and continued on down the bay. We got down to BI and turned around, and Jen did get back in the saddle on a less heel-prone broad reach and did a good job.

There was supposed to be a raft up in Berkeley Island following the race at 6:30, so we ducked into Trixie’s to tidy up the boat then put out a hail to Stormy Petrel to see if anyone was there yet. Providence II responded as the only boat that was there, so we motored over and rafted up to them. With no other boats by 7:00, we proceeded to eat all of the food that Providence II had brought to the put luck. We still don’t get the nautical pot luck protocol…people seem to bring everything from a box of crackers to full-on food-food. We had prepared some foodish naan and hummus, but Providence had fried chicken, potato salad, and garden salad, replete with plates and proper utensils, so they easily won and we had a great dinner. We talked a bit and eventually Mystique and Stormy Petrel showed up. We didn’t get to spend much time with them before we had to go because Jen had a long drive home. I was staying though.

Tim was scheduled to come early on Sunday and sail with me, so I was planning on staying on the boat overnight by myself in a slip at Trixie’s. Jen had a lot of school work to do, so I think she was glad to have me out of the house. My approach to the dock was pretty much perfect (since there was no one around to see it) and we tied up without issue. It was cool overnight and I slept unusually well for being on the boat.

I woke up around 7:00 to the sound of wind whistling in the rigging. The WX channel was still calling for 10-15kts but it seemed like a lot for that hour of the day. I brewed up some Café du Monde coffee with chicory in the french press, which worked much better than the percolator. Equally elegant, I also brewed some Cup Noodles. I don’t know if it’s the grind or the coffee or what, but with my usual 4 minute brew time, the Café do Monde was the color and texture of well-used motor oil. The good news was that my tin mug (which I believe is actually made of steel) holds 3 or 4 times more than my french press, so I was able to take it like my whiskey, with a substantial amount of water. I enjoyed my bogus caffè Americano in the cockpit while watching angry power boaters curse their engines.

Tim arrived at 10:00 bearing hoags and beer. We checked the charts and made preparations before casting off the lines and heading out. There were lively easterly winds kicking up whitecaps on the main body of the bay, so we put in a reef before turning off the motor. The weather station at Trixie’s was damaged in a storm earlier in the week, so I didn’t have a firm knowledge of the wind speed, but the waves were particularly high for the bay.

On a reefed main and partially furled genoa, we sailed south making great speed. We touched bottom near the southern mouth of the Cedar Creek and had to do an emergency tack, which went well despite the momentary excitement. It reminded me that we should go over what to do if I should fall overboard, since Tim isn’t an experienced sailor. We talked about how to release the sails and start the engine, and even practiced heaving to among the wind and waves. We sailed out toward Tices Shoal and then tacked again, and were able to get all the way to 42 on that tack.

After passing 42, we were a little hungry, so we headed west to get out of the main thoroughfare and heaved to to have lunch. We were drifting north at a decent speed, and I eventually rolled up the jib and lazily sailed on an improperly trimmed main, just to calmly get us away from an area that was loaded with crab pots and things at low speed. When we were ready to sail again, I put out the jib and Tim took the helm.

Though the winds had calmed down a bit, the sky became odd, striped with a single large, clearly defined gray stripe and an assortment of white and gray fluffy clouds. I didn’t see anything resembling a cumulonimbus cloud though, so we continued on past 40 and toward Toms River. Tim sailed all the way to 37 before I took over to navigate the traffic and heading changes around Good Luck Point. We didn’t have much time to get into the river before we had to turn around to meet Jen, so we did a slow dance with a large catboat that was also wandering around the mouth of the Toms and made our way out. We touched bottom several times, but nothing serious. I thought that we’d be able to make it over toward Seaside, and could even see another sailboat way over there, but it wasn’t in the cards, so we tacked and took the shortcut running close to the old Ship to Shore antenna network. I couldn’t point high enough to really clear the land, and didn’t feel like tacking while Tim was in the middle of a story, so we started touching bottom again about 30′ from land (not sure what, or if, I was thinking). Of course that boat that we’d seen over by Seaside was now clearly Stormy Petrel, and if I’m ever going to do pirouettes on the keel quite obviously too close to land, it will be when someone with a Hemingway beard is watching me.

Tim winched up the keel and we motorsailed back to meet Jen at the dock. The timing was perfect, and despite a bit of bay bottom phrenology, we had a pretty good day of spirited sailing. 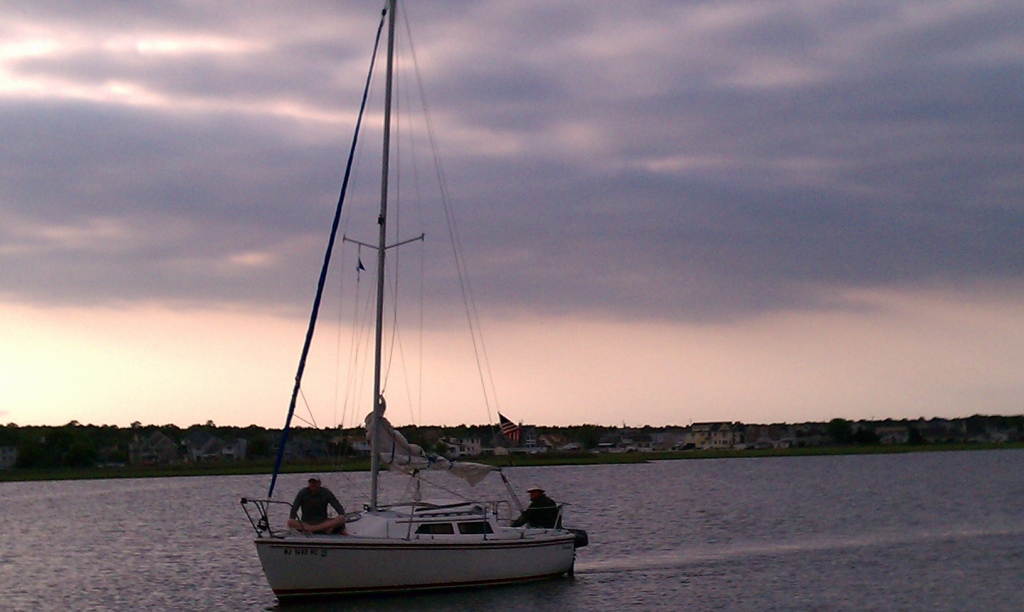