The absurd refrain of “weekend coastal storms” kept us from sailing Fortuitous once again. Rather than be cooped up in the house, constantly reminded that we can’t sail, we decided to take an impromptu drive to anywhere.

We went south. It rained almost the entire way, clearing slightly just as the endless chicken farms and sleepy towns of the Delmarva Peninsula started to give way to actual stuff. We drove past the NASA Wallops flight facility and over the only causeway I’ve ever seen with an intersection, making our way into the not-quite-in-season beach town of Chincoteague. 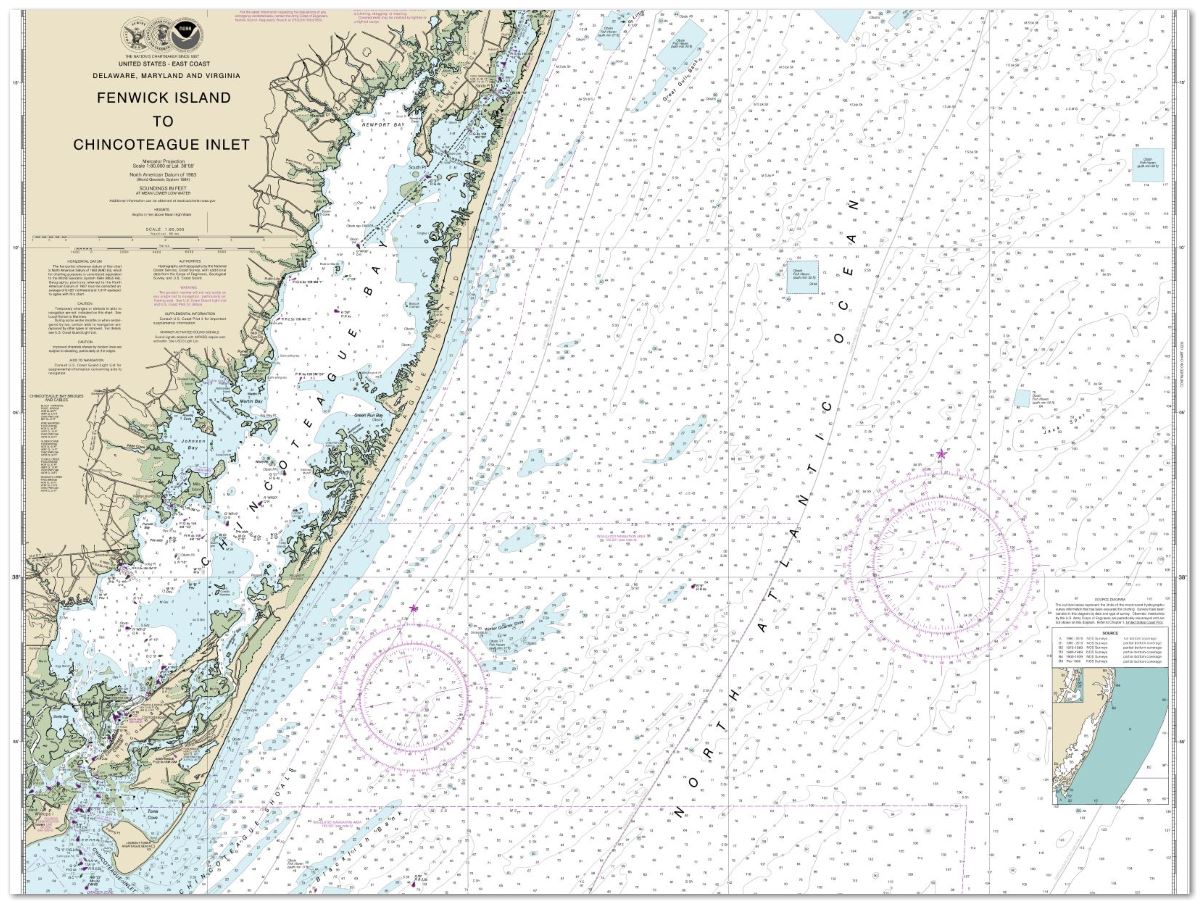 I thought I’d been there before, but I guess I’d only ever been to Assateague, the barrier island that protects Chincoteague Island from the ocean and creates Chincoteague Bay. I would have remembered the town of Chincoteague, because it was surprisingly beachy. A bus done up like a trolley passed us as we drove by shops selling swimsuits and straw hats and novelty T-shirts among dozens of ice cream stands. We found a hotel and tidied ourselves up, and immediately drove over to Assateague to see what we could see before losing daylight. 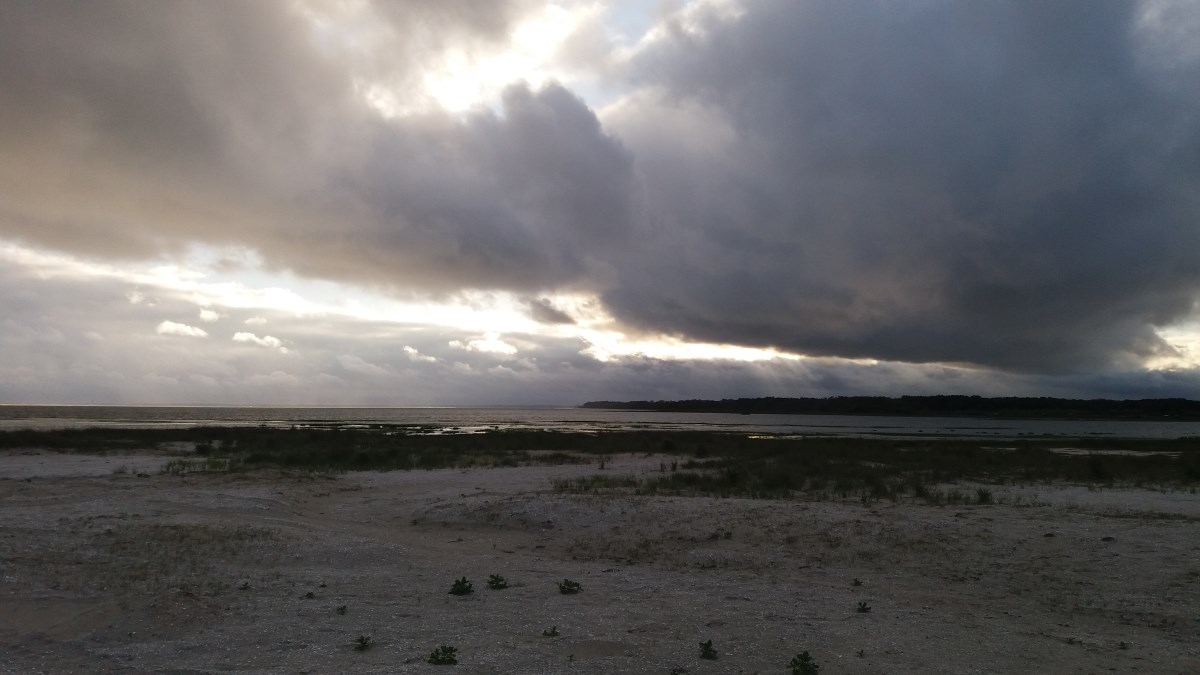 The remnants of the storm made an excellent backdrop for the Assateague Island National Seashore, which is all preserved, natural land. It reminded me somewhat of Island Beach State Park, but with different plants and sand—coarser and darker in color than Jersey beach sand. It’s also distinguished by the fact that they have wild horses living there, which is far more elaborate than Island Beach’s fox problem.

We could nearly drive onto the beach, on roads made of crushed shells. 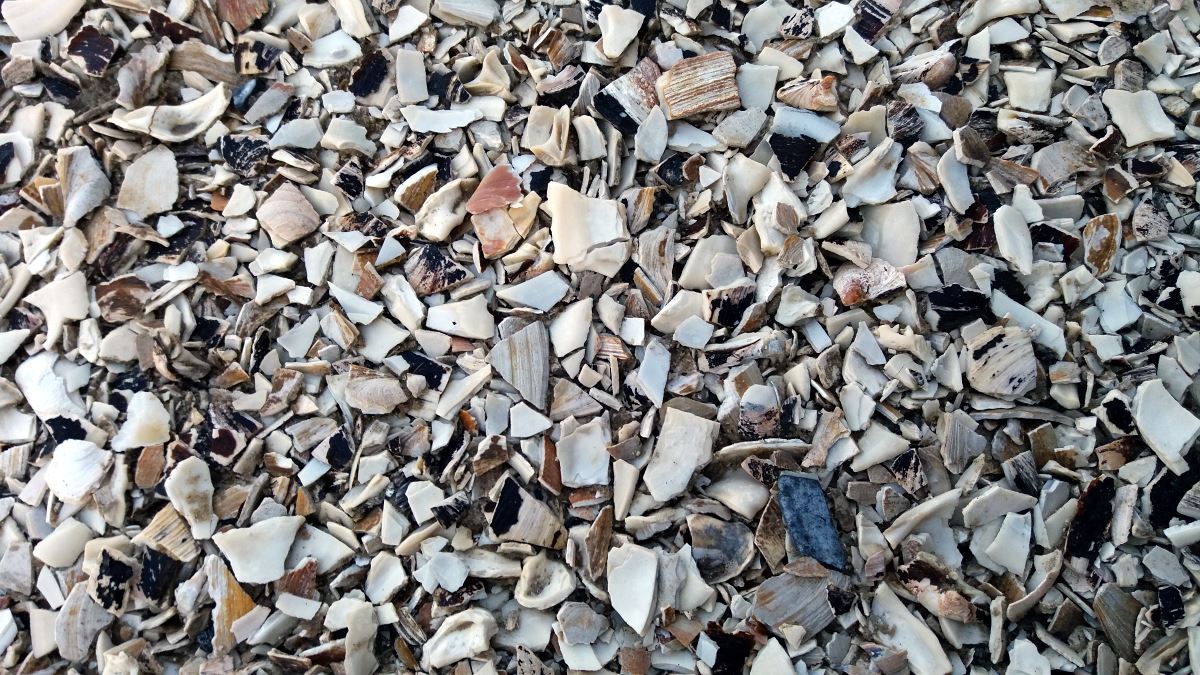 I, of course, was wearing my dress-casual shoes, because who goes on an adventure looking like a miscreant? I didn’t really want to walk around too much on the beach, but Jen went up to the water’s edge as I tried to capture photos of the breaking waves from the moderately less sandy shell road. 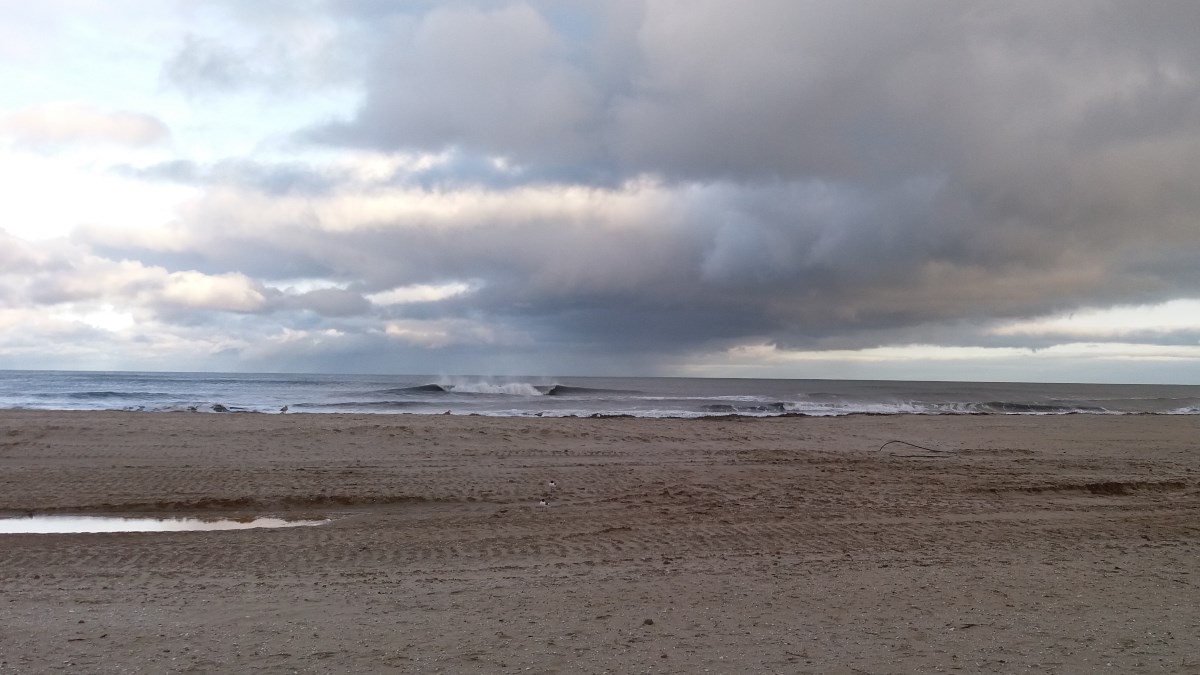 We explored as far as we could without having to let the air out of my tires for true off-roading (which required a permit anyway) and turned around. On the way out of the park, we tried to catch the light of the Assateague Lighthouse with our silly telephone cameras, not realizing that it would be all but invisible in the final shot. 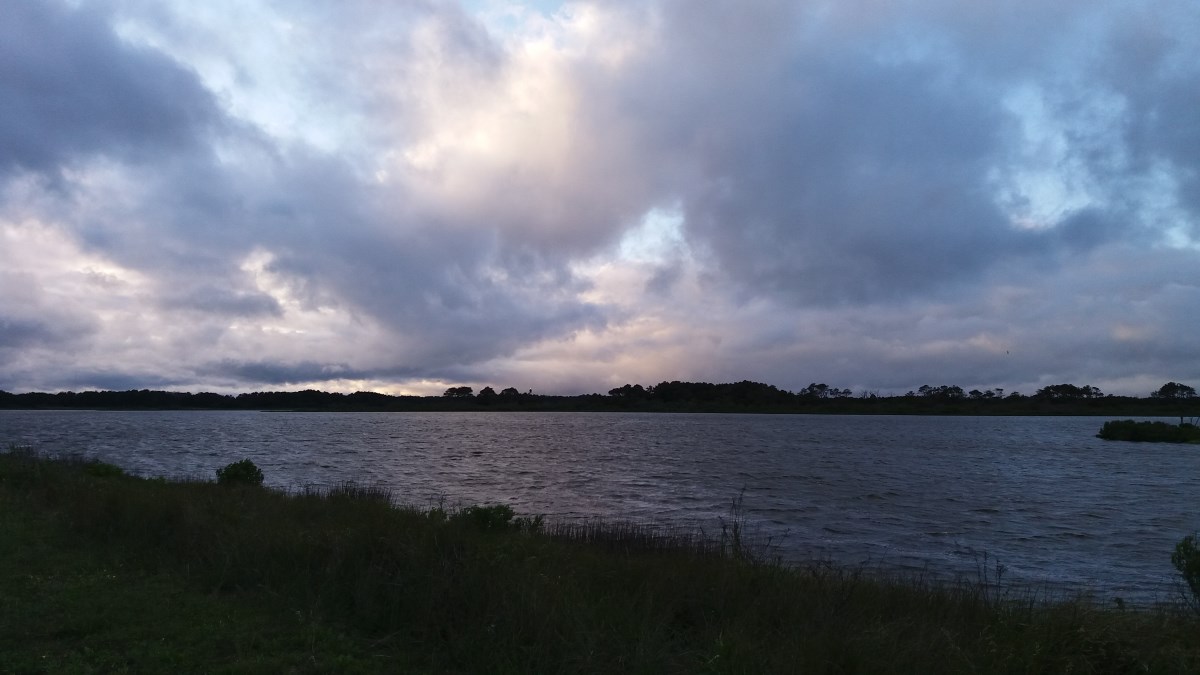 We were hungry, so we drove around the island to assess our food options. We were in Virginia, so I was hoping for something particularly southern, like barbecue or at least a non-chain buffet staffed by kindly grandmothers, but we couldn’t find anything of the sort in the touristy part of town. We considered going off-island, but the final turn before the bridge to the mainland took us along the docks where the commercial fishing vessels were moored. There, we found a seafood place that seemed to be unusually busy and decided to give it a try.

The food was fine, but more importantly, Jen had noticed a sign saying that they were going to have an open mic night upstairs. After our meal, we went up there, and then immediately turned on our heels, descended the staircase, and went outside. After a lengthy discussion, we went back in and I asked two different staff members if the upstairs was open to the public. They both assured me that it was. And that was when we crashed the Chincoteague High School Class of ’75 reunion.

There was a two-piece band playing, but no open mic as we crept in. The reunion was technically over, but the crowd had not dissipated. To accentuate the discomfort, Jen selected a couple seats at the bar with our backs to the band and our fronts toward the wreckage of 1975. The 19 intervening years between their age and mine must have been a rough couple of decades. I stole a glance at the clientele with every slug of beer, trying to make sense of it all. There was a man in a shiny leather vest who was neither at a Renaissance Fair nor a Tokyo gay bar specializing in shiny leather vests. There was a guy who I named Hoss who looked (and acted) like a 300-pound meatball dressed for skeet shooting. I believe a woman with no teeth tried to engage us in conversation, possibly about the band’s song selection or the absence of dancing, but I had barely started drinking and couldn’t make out much over the congas and hard-strummed guitar. I just smiled and nodded, wide-eyed and noticeably afraid, as Jen stole cucumber slices from their veggie tray.

Eventually, a guy came in and addressed the band with, “Play some Smoke on the Wudder,” in an unmistakable Philadelphia accent. This was the first sign that there were people there who weren’t with the reunion. I ordered more beer. Open mic night began with the guy from the original duo acting as the “house band.” One of the class of ’75, in a pageboy haircut and indoor nighttime sunglasses did a Bee Gees cover. A harmonica player and a guitar player did their thing. We mostly wished that the woman from the original duo would come back, since she was the best performer of the bunch.

Jen and I are deeply antisocial, but there have been several occasions when we’ve been in a strange bar in a strange land and found ourselves talking to the locals about how we wound up there. Soon I had determined that Mr. Philly was acquainted with Mr. North Jersey. Mr. North Jersey was there with Mr. North Jersey #2 and Mr. Georgia (conveniently wearing a trucker’s cap with the word “Georgia” on it), who had all been down there for a couple years “doing jobs.” A lone drunk girl started dancing to a cover from Nirvana’s crowd-pleasing In Utero, and North Jersey #1 tried to dance with her, pushing her around the otherwise vacant dance floor like a magnet of the same pole. I ordered more beer.

I became adjacent to a conversation with an older gentleman who I named Pappy. His accent was at the intersection of Piney, Bayman, and True Southern, and almost indecipherable. I think at one point he boasted, “I was raised up in snot holler.” He apparently ran crab boats and had a lot of opinions. It was all quite a scene.

A scene that turned ugly when a shoving match broke out between North Jersey and some jacked-up guy with no neck. North Jersey’s moves on the dance floor were not to No-Neck’s liking, and he felt it necessary to work out his ‘roid rage by defending the woman’s honor. Jen sat motionless as the crowd of people yelling and shoving each other (and attempting to stop the shoving) grew from the seats directly next to us at the bar. I was standing in front of her, concocting a plan involving a bar stool and a Swiss Army Knife to buy her time to escape in case this thing went full-on bar brawl. No fists were thrown though, and no corkscrews were deployed. No-Neck left in a huff. Jersey, Jersey, and Georgia were forced to abandon their terrible-looking southern pizza equivalent, as they were also ejected. Jersey #1 said something to me on the way out about how crazy this all was, to which I replied “you can take the boy out of Jersey, but you can’t take the Jersey out of the boy,” which got a wildly outsized fit of laughter from Georgia, who was obviously higher than hell.

This is what happens when you can’t sail. Crashing high school reunions, bar fights, wild horses (we saw some on the northern tip of Assateague on the way home, which unfortunately led me to play The Rolling Stones Sticky Fingers): general depravity and the breakdown of civilization. The odds are that we’ll eventually get a weekend with reasonable weather and buoys and we’ll get to sail, but I’m getting a little ragged waiting for my luck to change.