We decided to spend the weekend on the boat.

As we often do for Jen’s birthday, we celebrated by sailing to one of our favorite anchorages, Myers Hole. It’s a nice, easy weekend that’s not too far away, but feels a little exotic with the lighthouse and tidal currents and the smell of the ocean.

My goal was to be there by 2:30, to arrive at slack water with the current running neither in nor out. As usual, we had some setbacks. We didn’t leave the house exactly on time, then had to stop for diesel and provisions. When we got there we had to put the fuel in the boat and fill our water tank, which has been empty for most of the season for racing purposes. Adding fluids to the boat always turns out to be more of production than it should be, with one person in the boat watching the levels go up, the other person outside the boat awkwardly pouring something into a small hole on the deck, and neither able to actually hear the other without yelling. I forgot the camera (so all of the photos in this installment were taken on my lower-mid quality telephone) and Jen’s birthday presents, and to top it off, we left the dock with my bag still in the car, so we had to stop off at the work dock before even leaving the marina so that I could walk back and get it.

The whole point of this was that it was an easy, relaxing weekend though, so we just kept going. The wind was light from the southeast, and we sailed a close reach down the bay. Jen was surprised that we got to BI so quickly. We fired up the engine and furled the jib as we turned to enter the Oyster Creek channel. 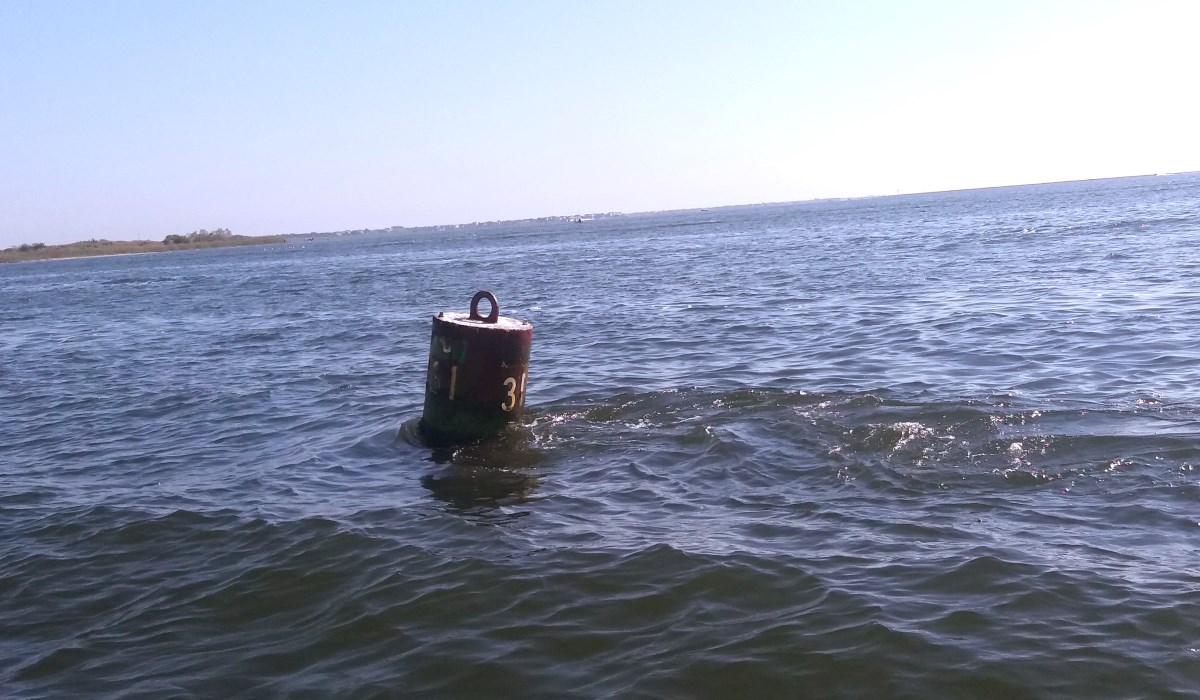 Since we missed slack water, the current was probably running 1.5 or 2kts, and we could see it pushing against the buoys as we approached the inlet. It wasn’t particularly challenging to get out there, even though our charts had the buoys in radically different places. It was just a slow slog against the current with lots of big powerboats running through making huge wakes. I was glad that we left the main up for stability, even though we couldn’t really sail most of the way since it was predominantly straight upwind.

We came around the sandy peninsula called The Dike and the lighthouse came into full view, along with some equipment that I assume was part of the never-ending dredging operation in the inlet. As we motored in, it became clear that it was two barges with some sort of crane-like contraptions on them, each with a tugboat moored to it. We don’t get to see too many tugboats on the bay, so this was pretty exciting. Tugboats are obviously the happiest of working vessels. 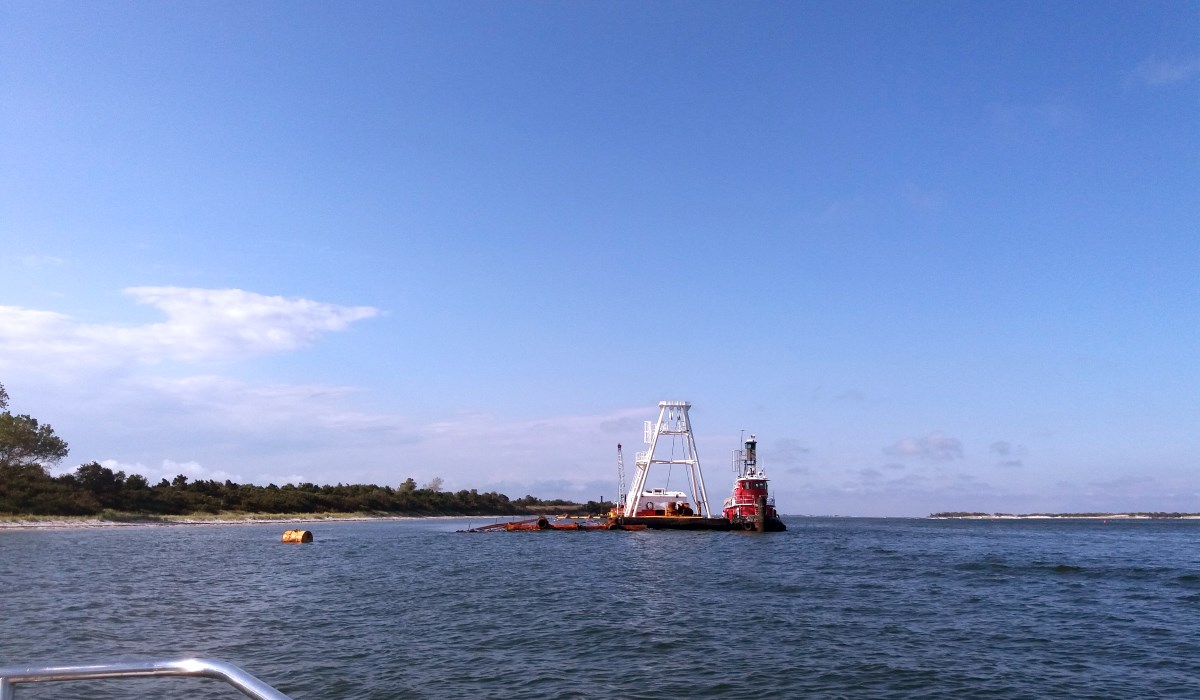 The tide was nearly high, so we could go pretty much wherever we wanted, although we needed to account for the fact that the tide would eventually be low when choosing a place to anchor. We crisscrossed the area a couple times and I took depth soundings. There’s a clear anchorage, near a mooring field, but we don’t like to be around other boats so I found a spot that seemed deep, but close to shore—hopefully far enough away from the channel that we wouldn’t be blasted with wakes all night, and with enough room to allow the Candice L to get around us if she decided to suddenly spring into action. I thought I had us in about 10ft of water, although when the rode came taut, we were in more like 8ft, with room to swing further toward the beach. We decided, at least temporarily, to see how it would play out, and I affixed the kellet (as featured in The Storm at Myers Hole).

I made us breakfast for dinner, drank some racing beer, and we relaxed in the cockpit as the sun set. 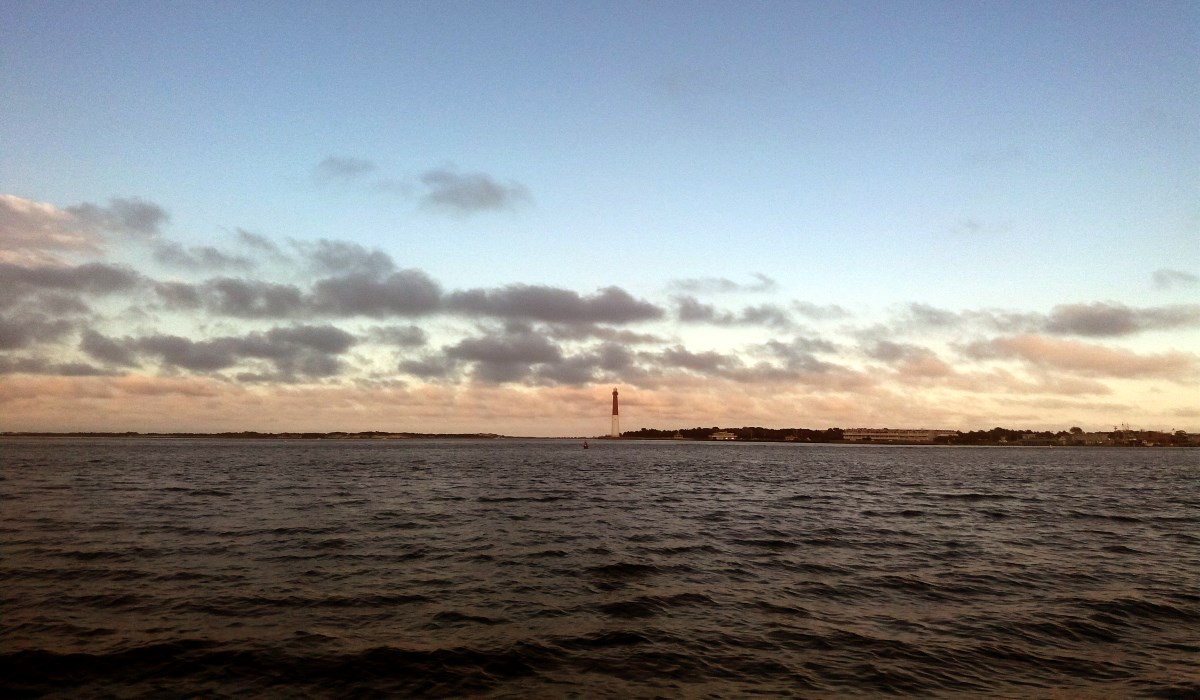 I have a long history of not sleeping well at anchor. Even though we’ve upgraded our anchoring equipment and steadily improved our anchoring technique over the years, and even though the conditions were about as mild as can be, I still only slept for short periods of time. At one point, I got up and tried to sleep in the cockpit, where at least I could see the depth reading (which remained fine). I may have been able to pull it off if I could have found another blanket in the dark, but the beach towel that I was using as improvised covers would prove inadequate. The stars were nice though. I don’t know why there are more visible stars there, being right next to Long Beach Island and all of its street lights and other sources of light pollution, but there are.

Eventually, I went down and got back into my bunk and got in a few hours of sleep before Jen’s telephone starting singing its alarm. We had plans to catch slack water at 8:30 and get back to land to celebrate the rest of Jen’s birthday. The view through the open companionway when I woke up was solid gray, and I thought that we were in fog—my least favorite condition for our primarily visual navigation. It turned out to just be a sort of misty overcast though and not actual fog, so we could see. I went on deck to check out our situation while Jen converted the boat back to sailing condition. 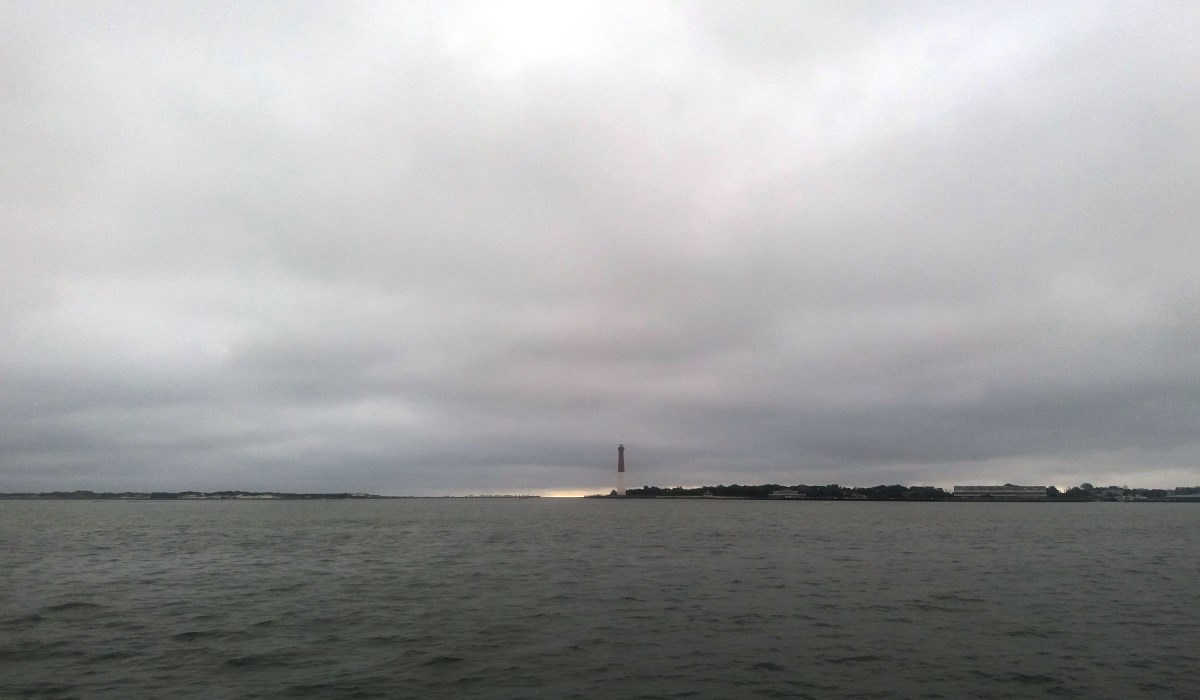 Despite the fact that we’d turned through at least 180° as the current switched, our rode was in good shape (not wrapped around our keel) and our anchor had held just fine. I love the kellet. The anchor must have been set in sand instead of mud, because when Jen brought it up, it was pristine. We waved to the tugboatmen, and then made our way out among the shorebirds and the sedge, then back to the bay where we sailed back to our home port.

Despite the restless sleep and other issues, it was still an overall relaxing weekend getaway. There’s something satisfying about getting out there and doing stuff on your own, even if (or perhaps, because) there are obstacles to overcome.

The next obstacle is Hurricane Jose. When we got back to the dock, we put on extra dock lines, and would in fact return on Monday to add more, tie down the sails, and make sure that the boat was ready for whatever might happen. The storm is predicted to stay well offshore, but may bring tropical-storm-force winds to our area. 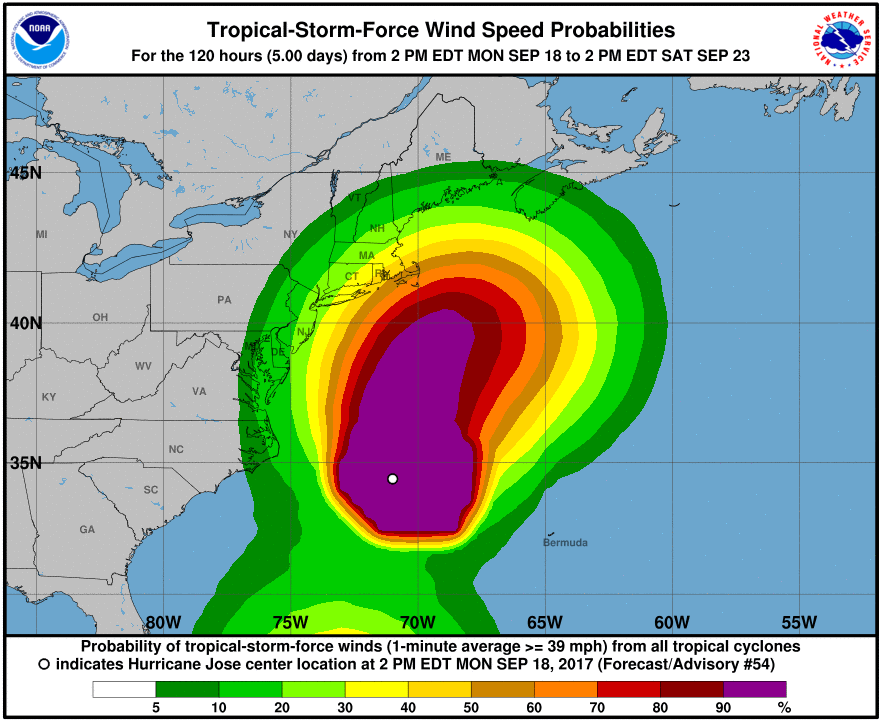 More photos are available in the gallery, here.