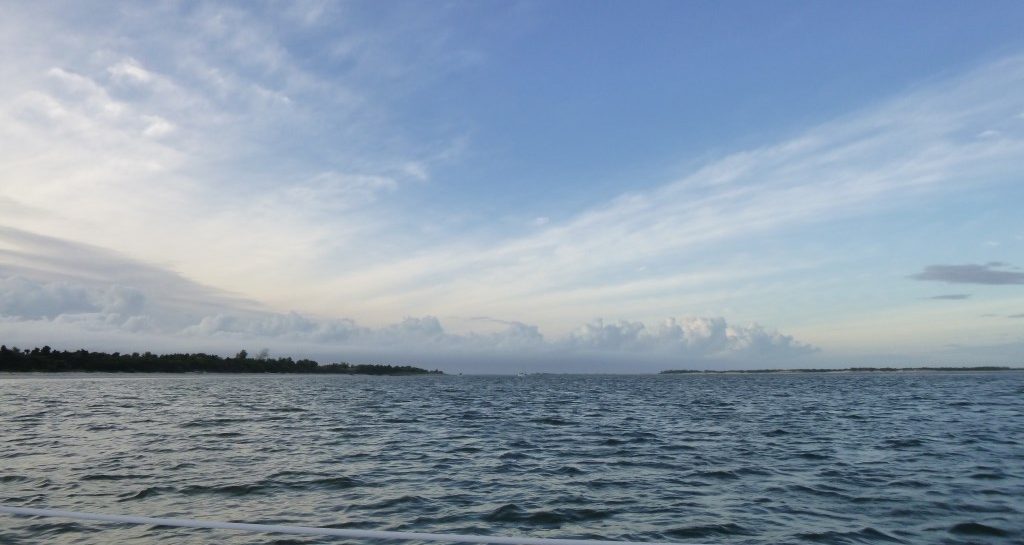 One of our fondest memories from last year’s sailing season was our cruise to Myers Hole, the anchorage just inside Barnegat Inlet. It’s not that far, but it can be a little tricky to get to and it just feels different out there. We decided to return, and the loose convergence of Jen’s birthday, the harvest moon, the autumnal equinox, and a small craft advisory led to an exciting, if tiring, weekend.

One of the things that makes Myers Hole different for us is that it’s significantly tidal and is subject to tidal currents. Barnegat Bay is protected from the ocean by a series of barrier islands, with just a couple inlets that allow water to flow in or out as the tide ebbs and floods, and the inlets are such small valves that most of the bay doesn’t really move that much. There is no current and about 6in of tide at our marina (the water level can vary more than that depending on things like rain and the prevailing wind, but the astronomical portion of the variance is well under a foot) whereas there is sometimes 3ft of tidal swing at the inlet, and an accompanying current that can hit 3kts.

When trying to sail around that area, it’s better to go with the flow if you can, although I’ve historically been pretty bad at timing that. I’ve been doing some reading though, and I finally figured out that the current isn’t directly related to the tide, at least not here, and slack water can be a couple hours after a high or low tide. This makes no sense to me, but I have come to accept it. I looked over the tide and current tables [ok, so I used the telephone app and not the paper version] and figured that we should leave around noon to get there with a positive but non-overwhelming push.

We actually did pretty well at leaving on time. The meter at Trixie’s was reading 18kts from the south/southeast, however, and it’s always stronger out on the bay. The southerly wind also meant that our destination was nearly directly upwind, so we took our usual pounding with wind-driven waves blown up by unmitigated fetch. Even with a reefed jib and main, Fortuitous was sailing on her ear and would be frequently stopped dead by large sets of waves. Our speed toward our destination was pretty bad and I was concerned about catching the current before it turned against us, so we elected to douse the jib, leave the reefed main up for stability, and motor there. 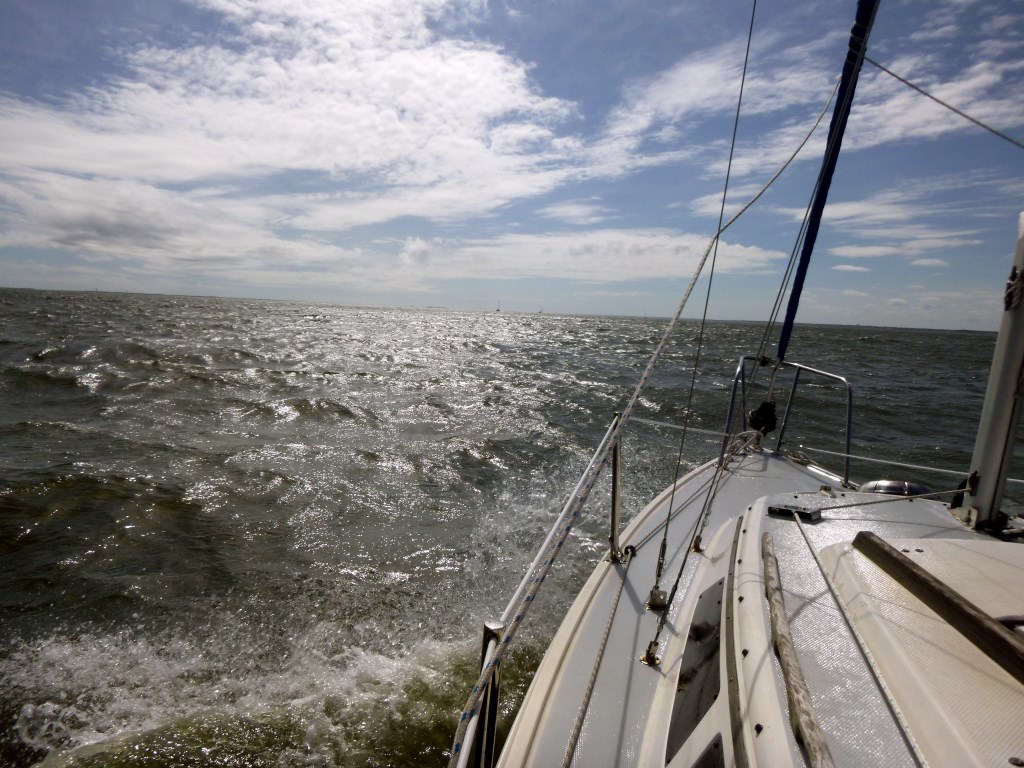 Even under power, it was a slow and wet trudge down the bay. Things improved somewhat—if not the conditions then at least our moods—when we made the turn to follow the Oyster Creek Channel toward the inlet. I’ve written quite a bit about the sedge islands, so I won’t go into too much detail, but we love it back there. The channel frequently forces you maneuver right up to land, while pelicans stand on the vast flats that might otherwise look like navigable water. We were mesmerized by a group of kitesurfers who were taking advantage of the breeze and occasionally leaping into flight. 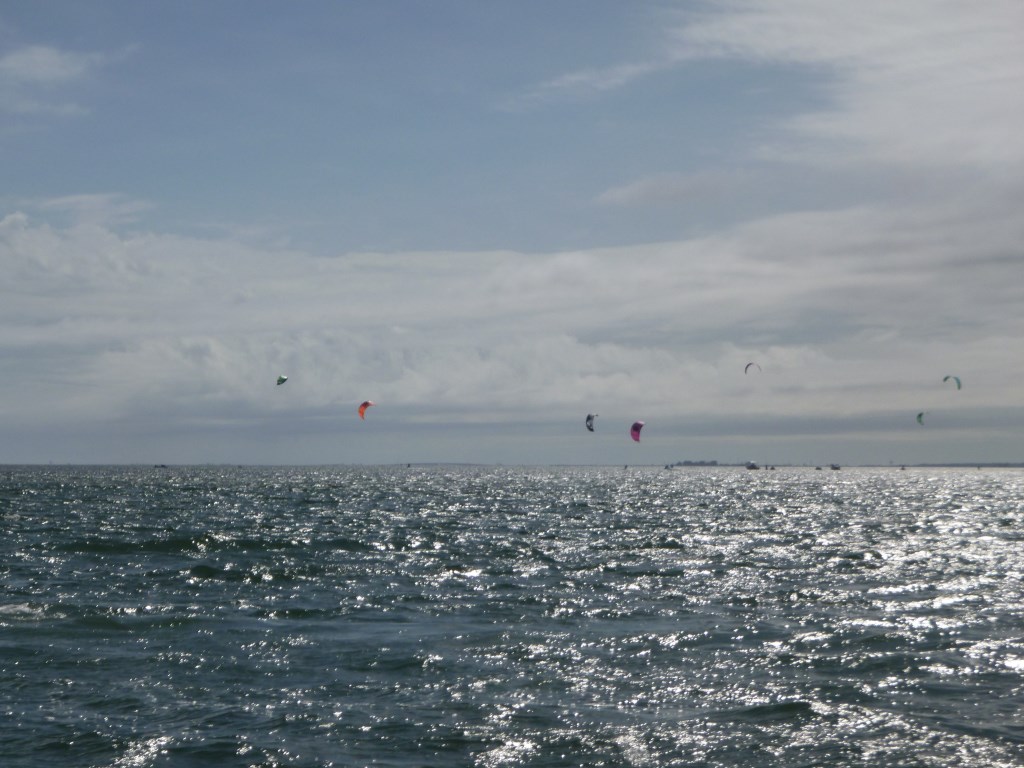 We followed the channel around, picking up between 1 and 2kts from the current. We actually hit our highest recorded speed over ground ever, tickling 7.4kts according to Jen’s telephone. We had joked last year about the condition of some of the channel markers, and I was wondering if any of them had been replaced following Sandy, but, ever thrifty, we’ve got the same ruined and invisible markers as before. We did find a touch of green on this can: 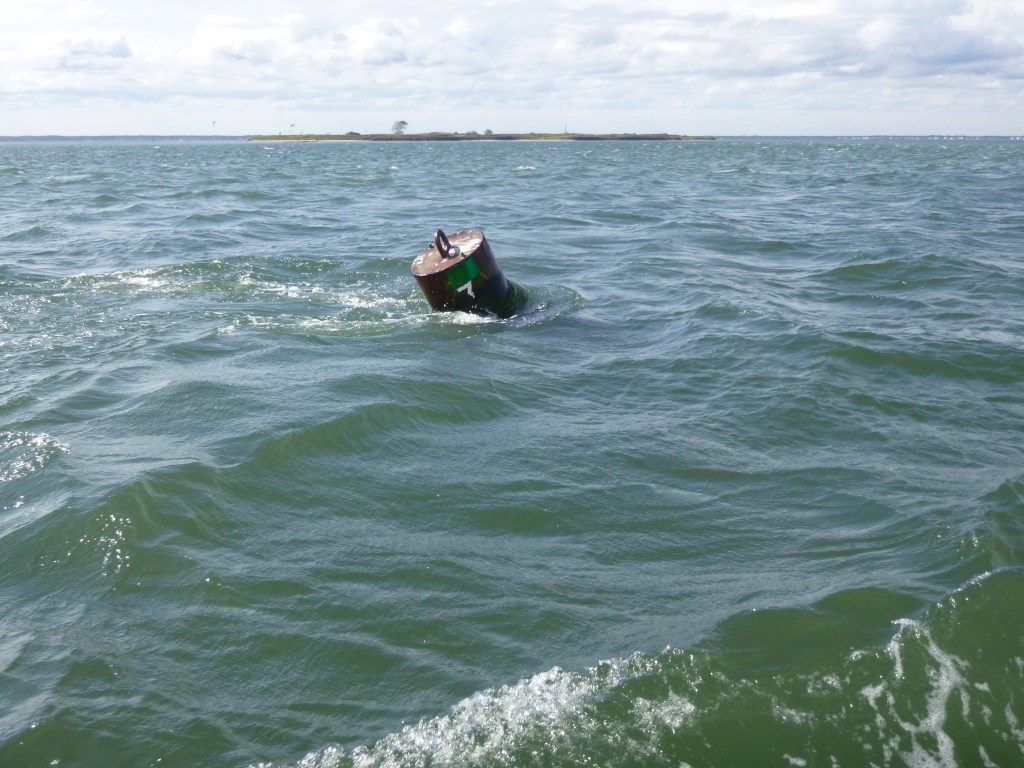 The lighthouse eventually came into full view and we motored into the anchorage. It was relatively empty, with just a French-flagged cruising catamaran and a good-sized sport fisher. Over the course of the evening a couple sailboats settled in on the southern end, while we were basically alone to the north. Anchoring there, with the current going against the wind, proved to be a challenge. My first instinct was to just go with the current, but it was still blowing to 20kts and I wasn’t sure if the current would necessarily win. My second instinct was just to see how the other boats were oriented, but the cat and the fishing boat were 90° to each other and holding, despite neither having a stern anchor. I decided to set the anchor in a direction that split the difference between them, but we quickly ran over the rode, which got stuck on our keel. Anchoring has been largely drama-free since we upgraded from our Danforth to a modern anchor design, but tensions quickly escalated as I got a little short with Jen, shouting vague and woefully unhelpful requests to Jen while she tried to work through the physics of operating an outboard in reverse. We eventually got it figured out, although we still tended to wander at a completely different angle from everyone else.

One of the few good parts about our anchoring job was that I got to try out my new kellet. A kellet is an old-school anchoring accessory that can be used to keep your rode from tangling on your keel when you’re stuck in weird anchoring situations. Ordinarily, the wind (or current) will tend to pull the boat in one direction: backwards, away from the anchor. But if there is a drastic switch, the boat might wander back over the anchor and the rode might get caught on some underwater appendage. The kellet is a weight that is connected to the rode and set to a depth somewhere between the draft of the boat and the water depth, to hold the first few feet of the rode down below the keel in the event that it goes slack.

Our kellet is made of two 40oz lead fishing weights, tied to some paracord with a bowline that makes a loop about 6in in diameter. The bowline is then clipped to the rode with an oversized stainless carabiner and is allowed to slide down toward the anchor, with the standing end tied off to a bow cleat. I got most of this idea from the crew of Sunset. Dale uses a downrigger weight, but I happened to find these for super cheap. Having two spherical, pendulous weights gives our kellet a distinctly, uh, masculine look, but I don’t think the specifics matter too much, as long as it can slide on the rode to an appropriate depth. Ours worked great through several current and wind shifts, after the initial fire drill.

As we settled in, we nonchalantly checked the weather and found that we were under a small craft advisory with rain and strong thunderstorms leading a cold front that was moving through the region. We were losing light, and it was probably too late to leave, so we thought through all of the things that we could do to prepare. I let out more anchor rode and took us to 10:1 scope and took down the flags. I put a tie around the furled jib and put some ropes around the covered main. I mostly waited impatiently as the western sky got weirder and weirder into the evening. 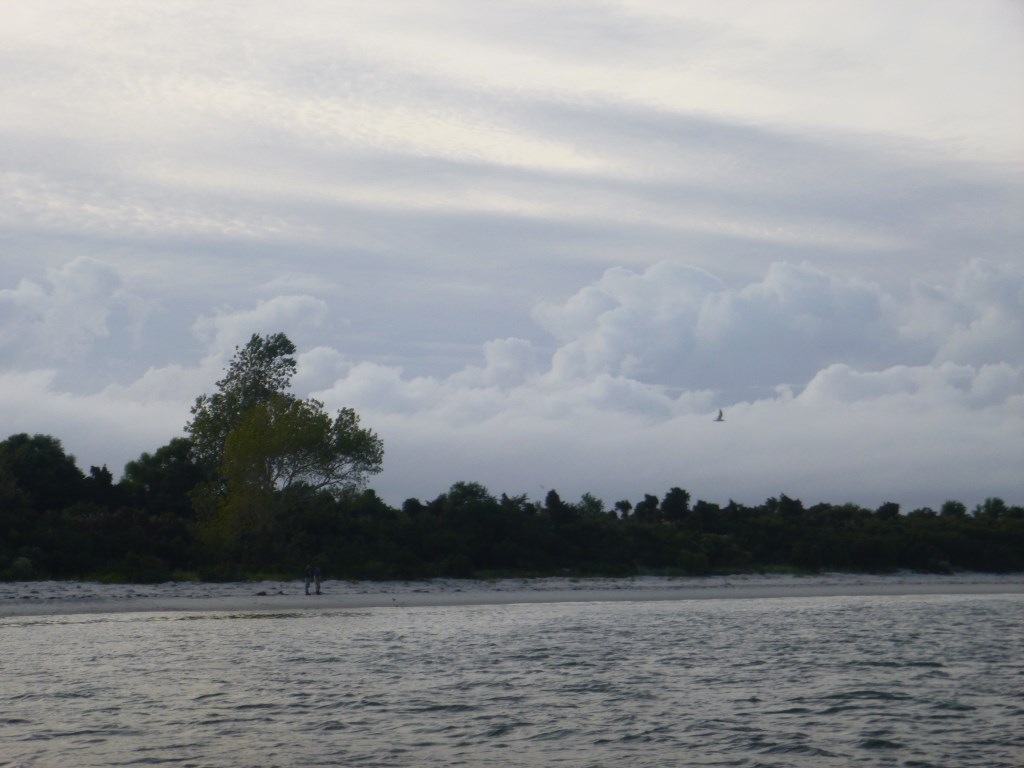 The wind didn’t subside with the darkness; it just got more cold and damp. I was sitting in the cockpit, alternately listening to smooth music and the weather robot repeating the small craft advisory over and over, when I saw something that I couldn’t identify at first. The moon was rising over the ocean, still nearly full and the color of fire, so large that it was disorienting. Jen and I watched it rise just alongside the lighthouse, occasionally being cut by invisible bands of opaque clouds.

Jen was ready for bed and I briefly got into my bunk, but I was restless and eventually went back out into the cockpit to see if I could match up reality to the yellow and red blotches on my radar app. I could see distant lighting illuminating the clouds at a frightening frequency, but it appeared that most of it would pass to the north. Behind it was just a large band of rain the width of the state. I eventually went back below, and soon the wind kicked into another gear and we started getting pelted with rain. I recognized the sound of the rigging shrieking, but there was a range of other disturbing noises that I couldn’t identify—we’ve never been in the cabin in that much wind. The rain became more insistent, and it soon became obvious that the cabin isn’t a hundred percent watertight if you throw enough rain at it. I didn’t sleep much, but the good part about not sleeping is that you get to take pictures at dawn. 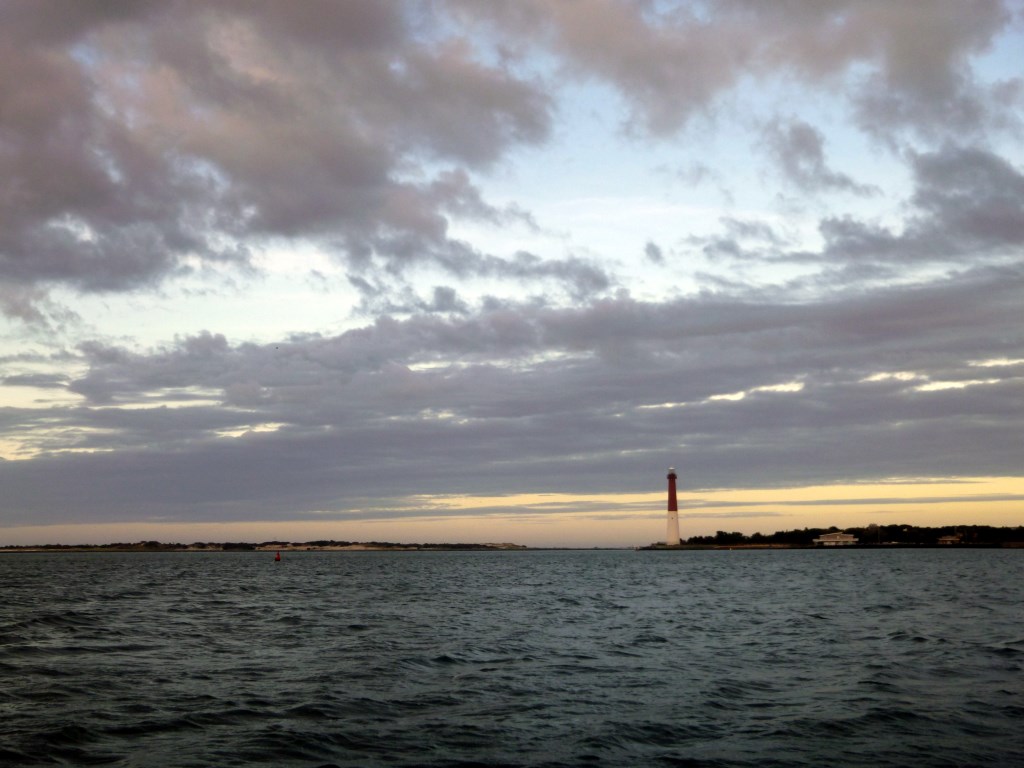 We made it through without too much trouble, other than an extra couple pints of water in the bilge. The wind had shifted nearly 180°, but our anchor is a champion and I don’t think we budged. I went back to sleep for a while and Jen and I both got up around 1000 and went through our 180 step ritual of making coffee. Our kettle actually holds enough water for me to make an entire coffee press and a Cup Noodle, which gives a sailor all of the vital nutrients: caffeine, sodium, MSG, and beef-colored Lucky Charms.

We prepared the boat for the trip home. The wind shift allowed me to proclaim from here on out “In my day, we sailed through 20kts and steep chop…upwind in both directions!” Also, get off my lawn. As it turned out, we had a smooth channel run back, well timed to coincide with a little helpful boost from the current. We only missed one set of buoys, where a brown “green” had become almost entirely submerged and a clot of powerboats had obfuscated the brown “red,” leading us to take a shortcut through to the next gate—one of the many benefits of the swing keel. The wind was still up, but it was just west enough that we were able to sail from BI to 40 on one tack, close hauled.

It would be tough to relive the magic of our first trip to Myers Hole, but despite the challenges, we still really like it there. There’s nowhere else that close that feels that different, and I’m glad that we decided to stick it out. 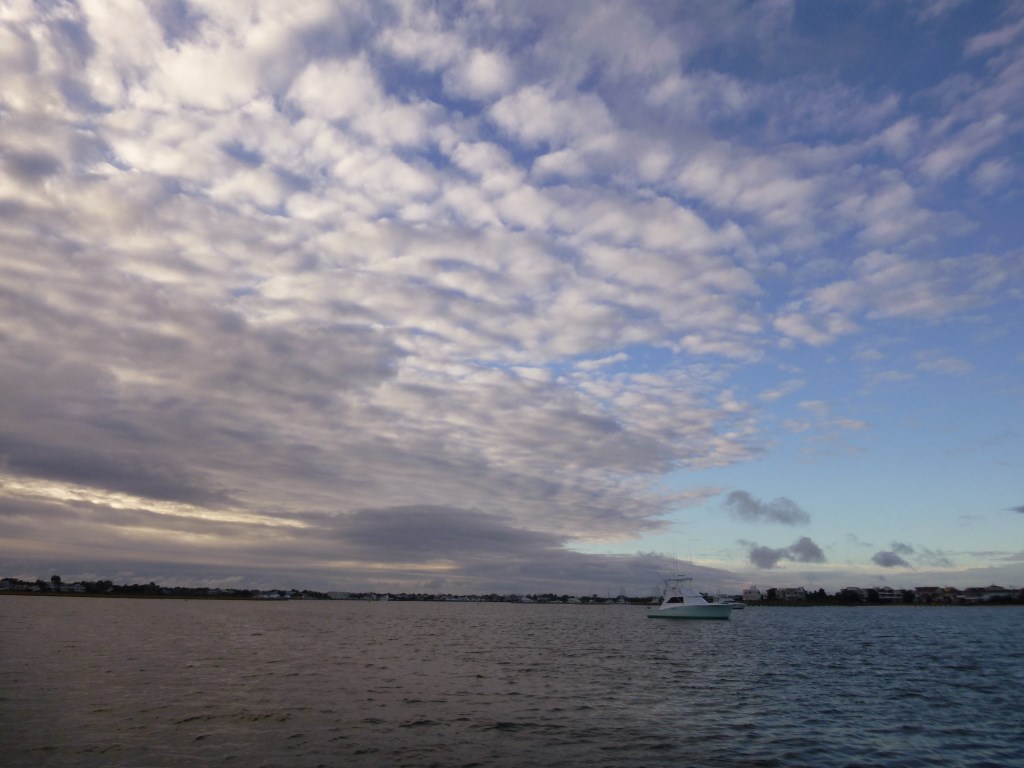