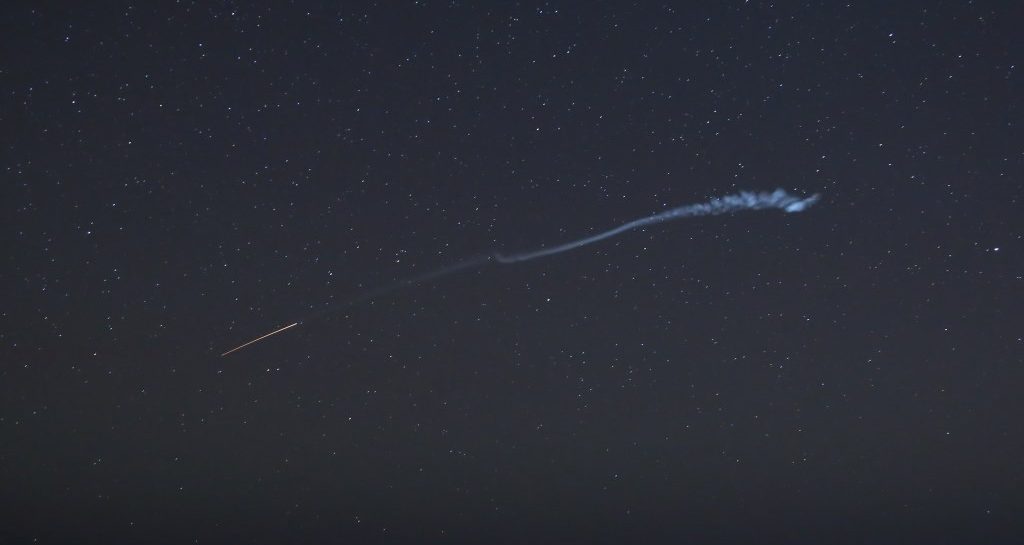 What a way to bounce back from last weekend’s crappy outing.

NASA was set to launch their Lunar Atmosphere and Dust Environment Explorer (LADEE) from a Minotaur V rocket out of Wallops Island, Eastern Shore Virginia, and it was supposed to be visible from much of the east coast. We weren’t sure what to expect since we’re about 130nm away from there, but it was a good excuse for us to spend a rare Friday evening on the boat.

It was dark by the time we put the boat in, and we putted around the corner to Berkeley Island. The moon had set, and despite an absurd amount of visible stars in the cool clear night, we had a really hard time seeing. We anchor in Berkeley all the time, but the darkness was disorienting and unnerving—there were just too few visible landmarks to get a sense of where we really were. There was only one other boat in the anchorage and the wind was practically nonexistent, so we picked a spot away from them on the western side of the cove and set a little shorter scope than usual to try to minimize the circle of “unknown” that we would sweep out. The anchorage couldn’t have been more different from last week’s nonsense: it was cool, calm, and completely peaceful.

It may seem somewhat anachronistic to watch a rocket launch from a sailboat, but around 2315 we put on some warmer clothes and clambered out into the cockpit for the show. I checked the countdown from my telephone as we anxiously watched the horizon for some sign of a rocket ship. Through a perfectly placed break in trees on Berkeley Island Park, Jen noticed what looked like a large red flare. It quickly rose above the silhouette of the scrub pines and we saw the first stage fall away. The second stage lit up behind it, putting out an enormous jet of orange flame as the rocket tracked from our right to left. It appeared to dim for a moment and we thought we’d lost it, but then the third stage kicked in and it continued to arc across the sky, leaving a little wisp of smoke that lingered even after the rocket had gone out of view.

I was not expecting to be able to see quite so much—I thought it might look like a moving star or something, but it was actually pretty intense. It’s nearly impossible to take night photos from a boat, because you need long exposure times from steady platforms, and even on a calm night our boat moves way too much. Fortunately, someone named Ben Wurst took some great pictures from just a bit south of us in Little Egg Harbor that were very similar to our perspective (with some additional lights from Atlantic City for flair): 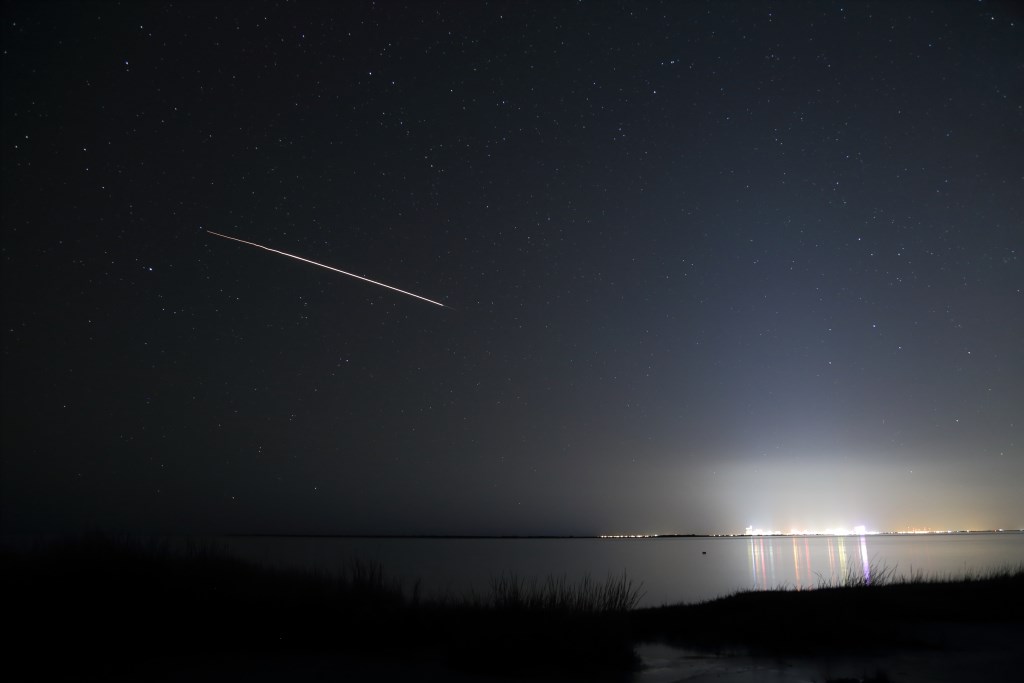 Earlier in the day I had spoken to the skipper of Freedom, a full-time cruiser that I know from the sailing forums. He had suffered a lightning strike near Montauk, and I asked him if he needed any help in New Jersey as he was making his way back south. They turned out to be fine, and I happened to mention the launch. Just after LADEE trailed out of view, we exchanged texts with exclamation points—he had a stunning view of it from out in the Atlantic off of Cape May, and could even see the horizon light up as the engines fired up on the ground. I wish we could have seen that version, but it was certainly amazing to have seen it all.

Go get your moon dust, LADEE.

We slept well and didn’t start to stir until mid-morning on Saturday. Our neighbor in the anchorage had left. The sky was still completely clear, the wind still calm, and the air temperature was warming up nicely. We made coffee and bummed around on the boat for a while. 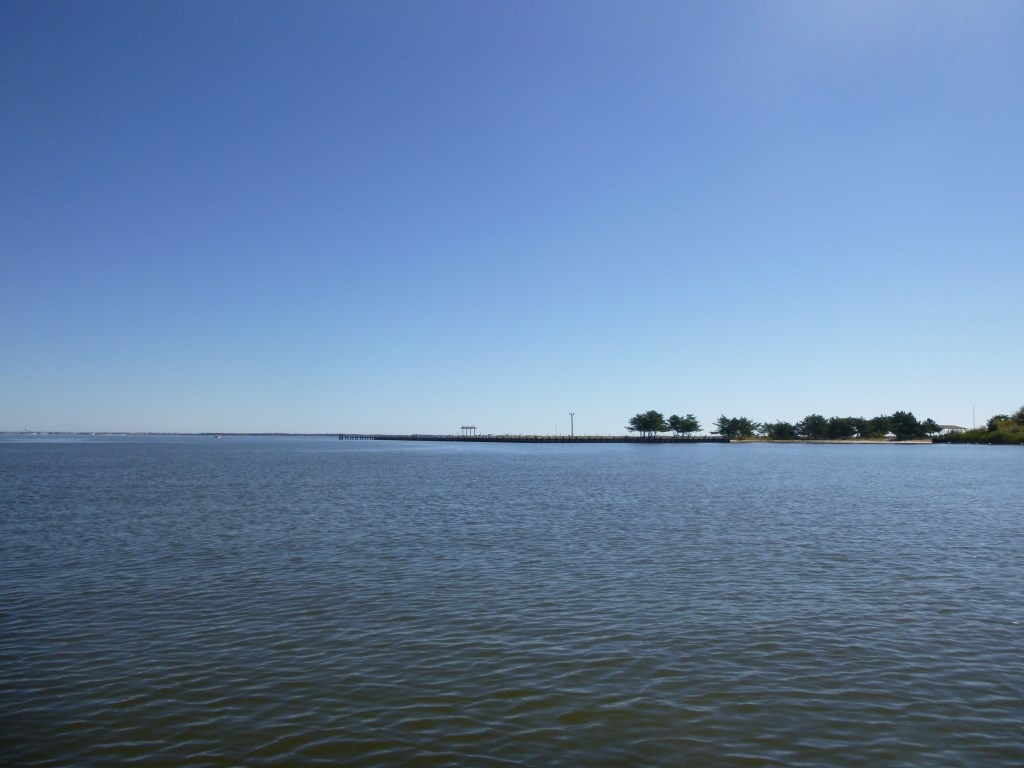 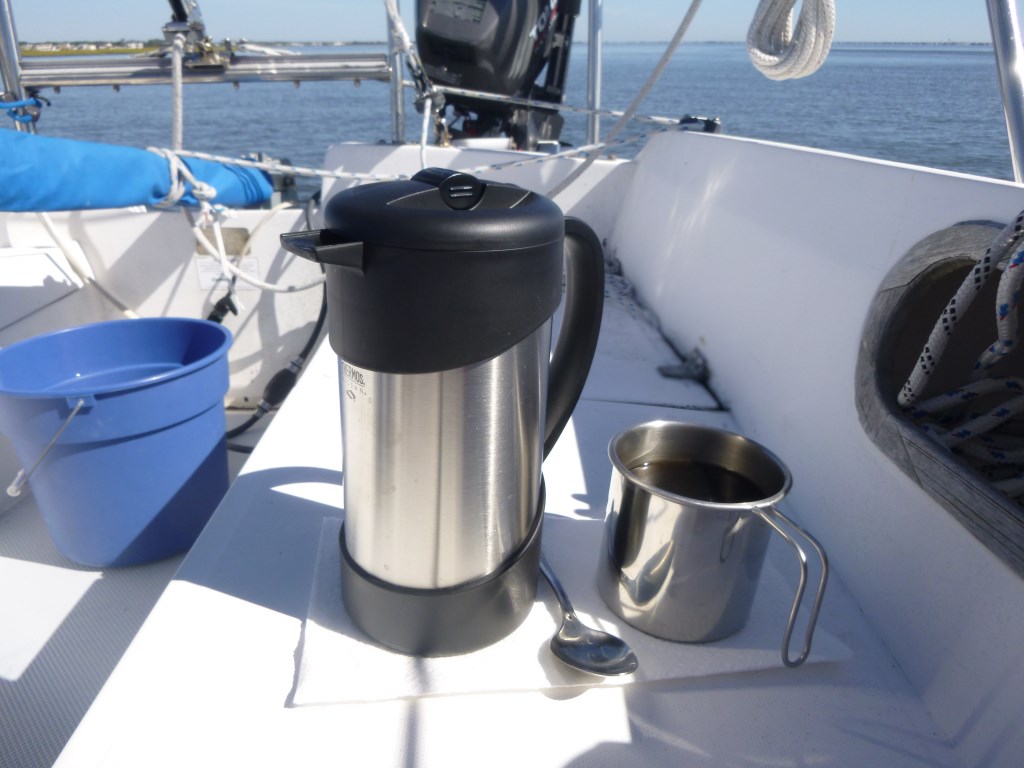 The coffee press is smaller than its outside diameter would imply, since it’s a double-walled vacuum thermos. This replaced my old glass press, and while I don’t really care about hot coffee, I’m certain that this one won’t get shattered if it were to topple over from an errant boat wake. Even though it takes forever to make a pot of coffee with our 8 BTU stove and even though the process produces several things that we have to “wash” with our scant fresh water supply, a good cup o’ joe at anchor is one of the finer things in life.

I took a quick swim, and then Jen prepped the cabin for sailing while I tended to the sails and deck. By 1230, there were brief periods of sailable wind, so we took the opportunity to sail off the anchor without using the motor. This always feels salty as hell, although as soon as we got the anchor up the wind died and whatever momentum we had pushed us into the marsh at crawling speed. I wound up using the engine after all, just to get us out of the cove.

We bobbed around for a bit, but then the wind filled in to a steady 15kts and soon we were shortening the jib to beat south more comfortably.

At some point, we got passed by a crazy-fast Melges 24. I don’t think we’ll appear on their Wall of Shame because we should get passed by a Melges 24, but it was cool to see them go. They were pointing at what seemed like 20° higher than us, then came around and set a spinnaker for a wild ride back. 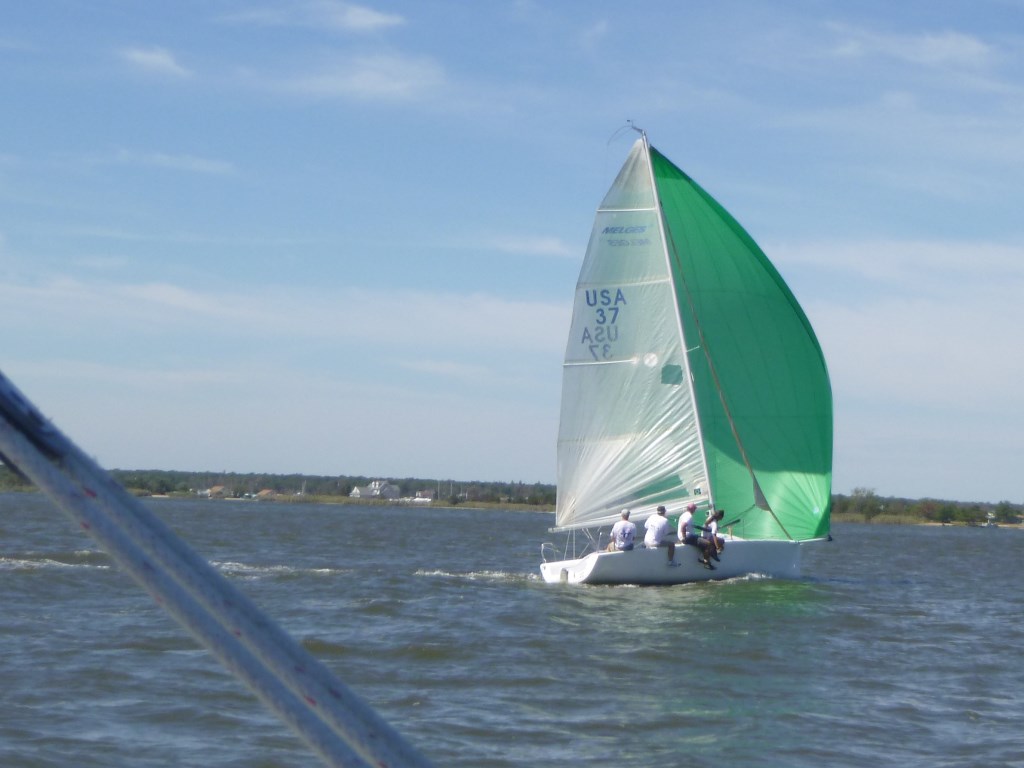 We also dueled with a motorsailer ketch all day. As soon as we got going we were on starboard tack, trying to get away from shore, and they were on a collision course on port, beating south. We made them bare off (or rather, we stood on, as per the rules of navigation). I had forgotten about them, but later, when we rounded BB and started to head home, they were right behind us and did the same. I think they had been following us all the way down but were unable to pass us. I headed off onto a broad reach, unfurled the jib all the way and forgot about them again as they went nearly dead downwind, but when we jibed to head back toward Trixie’s, there they were again, and this time with rights. Instead of going behind them, I jibed the main, went wing and wing, and actually accelerated away from them. I don’t know how that was possible since they probably had double our waterline, but that’s what happened, and we cut them off later with room to spare. I’m not calling Wall of Shame on this one either though. Back when my brother and I used to play NHL ’94, we would occasionally match up Ottawa vs. Anaheim, arguably the two worst teams in the game, which we called “Battle of the Sucks,” and that is how I would describe this ramshackle race (which we won). 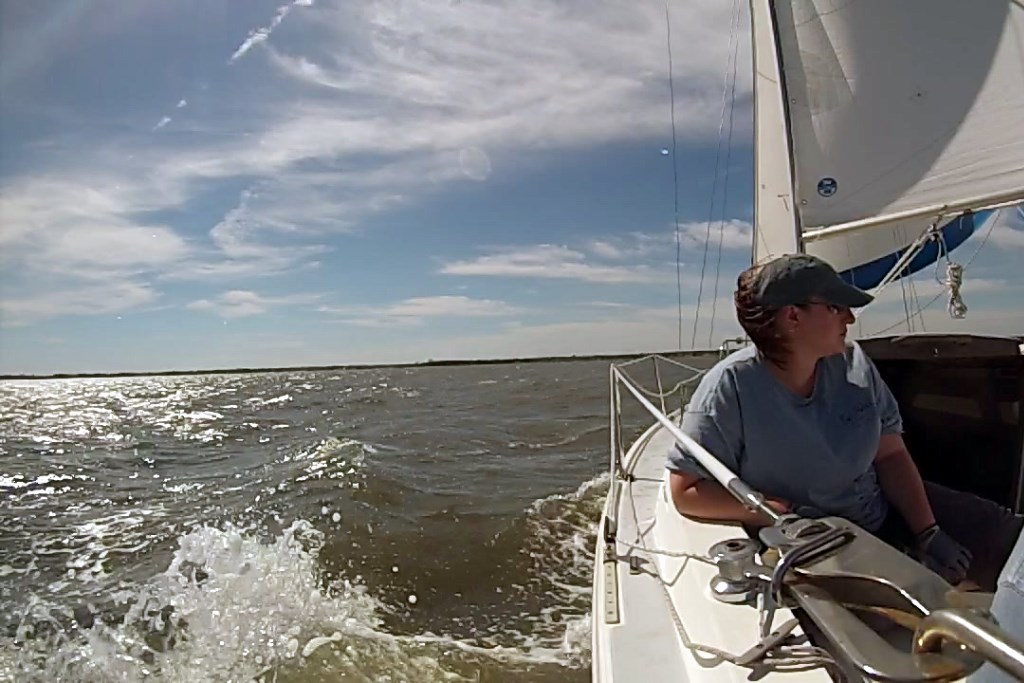 After sailing, we went over to Cedar Creek and hung out with the Windjammers Sailing Club for our annual pig roast. We suck at camaraderie, and mostly went on and on about the rocket ship and its moon dust mission, but we had a good time. The evening was capped off by a sunset befitting the cover of a Yacht Rock compilation. 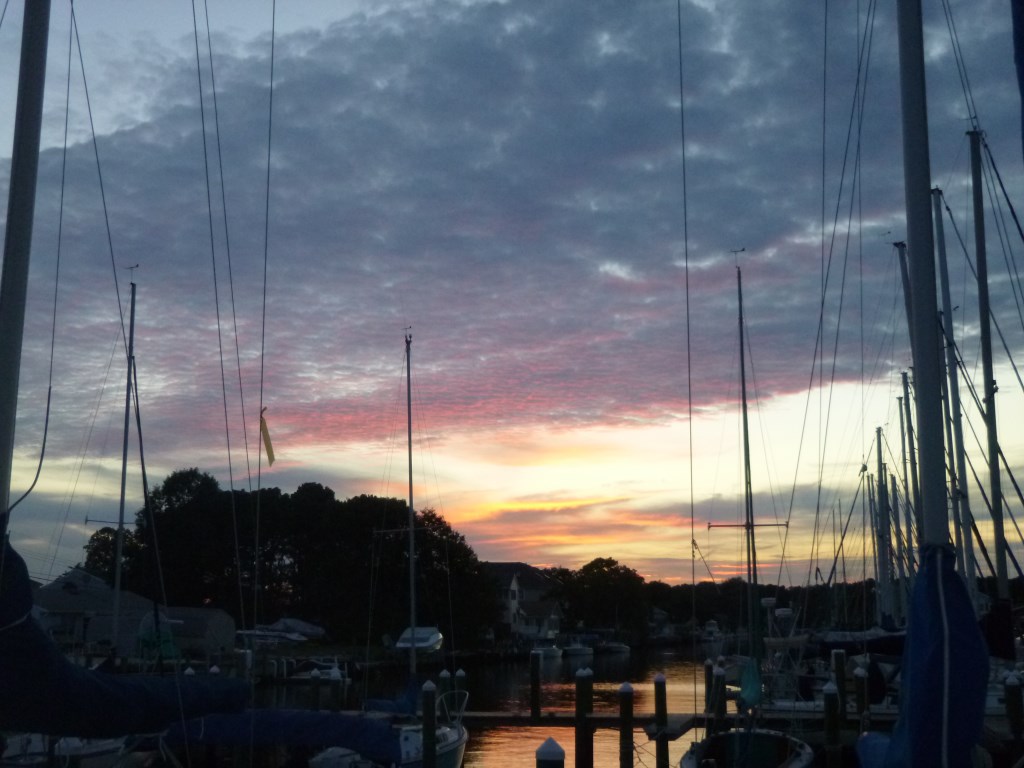 It’s incredible how different one weekend can be from another. I realize that they can’t all be skyrockets in flight, but we’re looking forward to other forms of [nautical] delight as we slip into autumn.

5 thoughts on “Burnin’ Out His Fuse Up Here Alone”