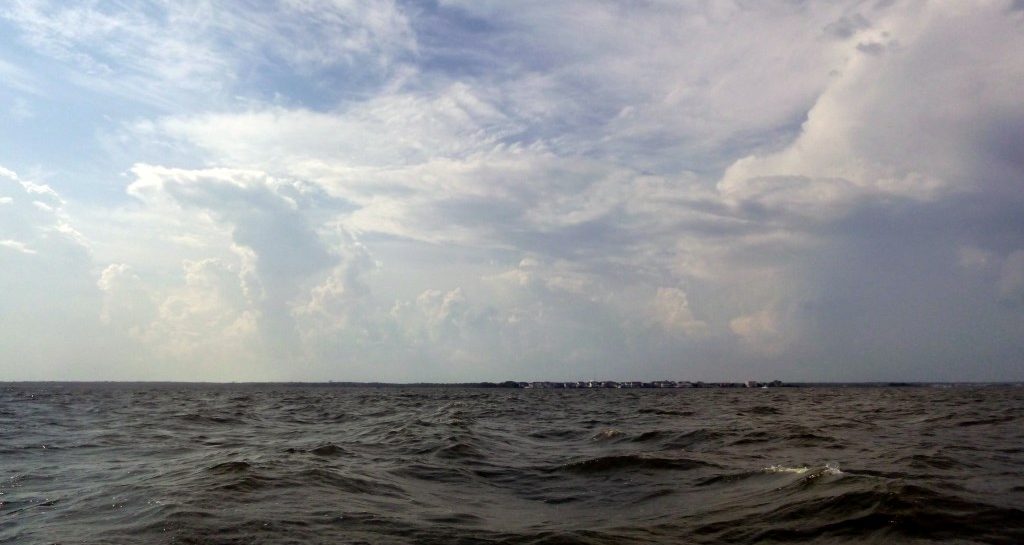 Labor Day. The symbolic end of the summer. Your last chance to wear those white pants. Ugh.

Things didn’t exactly go according to plan. We originally wanted to do a Saturday/Sunday overnight, but the wind was predicted to be on the rough side, gusting over 25kts throughout the day and overnight, which does not lead to peaceful sleep. Also, we just slept too late and I may have been mildly hung over. So despite the threat of thunderstorms, we headed down to the shore on Sunday.

I had noticed the last time we went swimming that the cotter pin on our prop was looking rusty, so I brought a fresh one to replace it. I didn’t bring any actual tools, because how could anyone possibly need anything more than a Leatherman to replace a cotter pin? Not to foreshadow this entire trip too heavily, but it all went to hell immediately. The exposed portion had turned to brown dust that had somehow remained in the shape of a cotter pin, like Bruce Willis in The Sixth Sense, ignorant to its own demise. As I approached with my pliars, it turned to powder and crumbled, and I couldn’t get it out. The internal, unreachable portions of the pin remained wholly viable, however. I retrieved my Junior Ratchet Kit from the truck, found the standard socket that most closely resembled the metric castle nut, and sheared off the mangled remains of the old pin. With the prop off, I was able to dig out the rest of the pin with the can opener and corkscrew from my multitool while Jen fruitlessly searched her purse for more non-tools.

We put everything back together and launched. Jen wasn’t feeling that great and I was more cranky than usual, and we didn’t even really have a destination yet. The wind was supposed to be from the south for the next couple days, and the thought of beating back from anywhere had us looking in that direction to insure a smooth downwind run back. We knew that our club was out at Myers Hole and we were feeling pretty antisocial, so that was out. I thought that we might be able to make it down to Conklin Island—that’s not a particularly sheltered spot (or anywhere we’ve ever anchored), but the wind wasn’t supposed to deviate, so it should have been ok.

Once we got out there, beating south just proved too annoying. The wind was aligned with the bay and blowing 15-20 or so, making for short steep chop that we couldn’t power through with any alacrity.

With the clouds piling up to the west, we decided to fall back to Berkeley Island Cove, which is well protected and a short trip to the marina in the event of ridiculous lightning. We sailed back on a much calmer beam reach, despite the confused seas and sky.

It being Labor Day weekend and all, the anchorage already had a few boats in it, including a couple boats from our club, some assorted powerboats, and a large raftup of powerboats. We got the anchor down and the riding sail up just as it started to rain.

We went below to avoid becoming hopelessly soaked. The temperature had seemed reasonable on deck, but without the stiff breeze it was quite hot and humid. The still air in the cabin was obnoxious and we struggled to find a position for the forward hatch that would force in some air without too much rain. We mostly tried to keep as still as possible, as if enduring some kind of Bikram torture, although I think we both fell asleep before attaining enlightenment. That round of storms passed mostly to the west, and we were treated to a nice sunset between the rain and the dark. 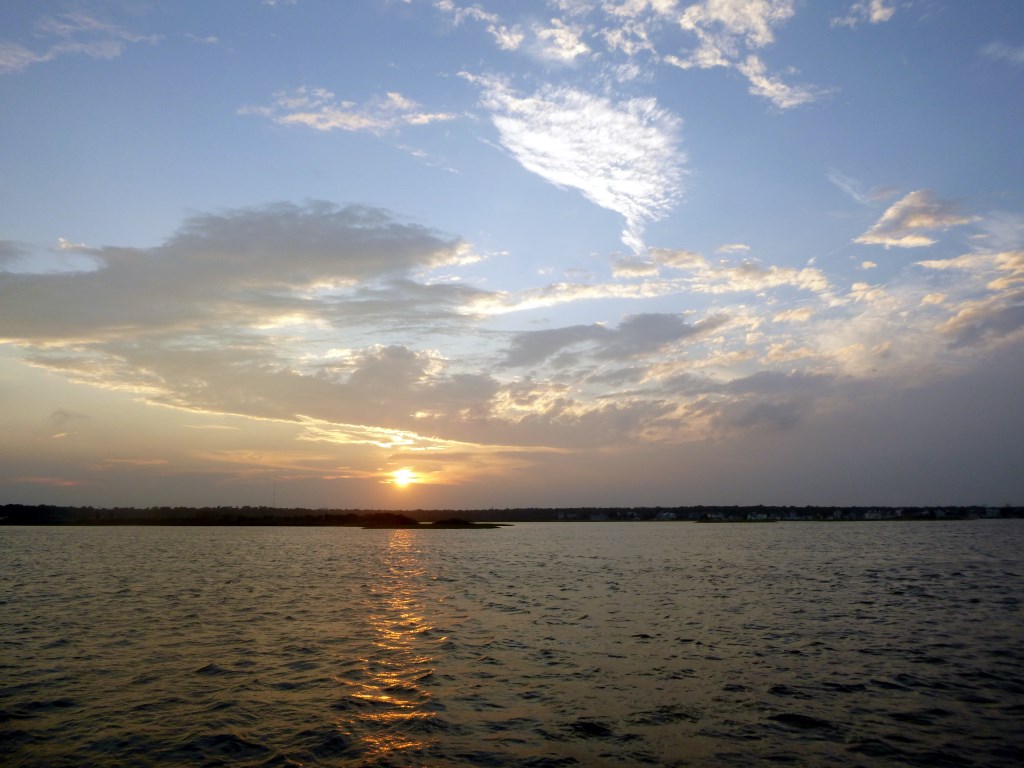 With the twilight upon us, more Windjammers piled in to the anchorage. I guess Myers Hole was only Saturday night, because half of the fleet showed up, requiring us to turn our passive antisocial behavior into active antisocial behavior. The powerboat raftup did start to break up, and I was hopeful that they would all be leaving soon, but apparently they only casted off the old folks and squares because the handful of boats that remained proved to be more of a scourge than the combined flotilla.

About the time that the sailboats were turning on their anchor lights, the raftup turned on their blue and green underwater idiot lights—the boating equivalent of those attention-seeking underbody light kits for your 2 Fast 2 Furious car. Then, I guess someone couldn’t pass up the once-in-a-lifetime opportunity to own the 2-disc set Raps for White People, which they blasted across the anchorage at an unnecessarily high volume. We weren’t close enough to smell the Axe Body Spray, but I’m confident that at some range, they were an affront to all senses. We hoped that the music was going to wind down sometime after dinner, but the fist-pumping easily went on for eight or nine hours. By 0200, they had moved on to a 90s nostalgia kick, and were screaming a drunken tantrum of Silverchair and Candlebox refrains, which continued until 0400.

We probably could have closed up the boat and kept the worst of the noise out, but it was hot. One of the best parts about anchoring out on a summer night (aside from the tranquility, the solitude, the natural wonder of it all, etc.) is that a boat will tend to follow the wind, and as long as there’s a little breeze, you can funnel it down into your boat by opening a hatch and keep cool. I fantasized about what we could do—everything from asking them to stop to calling the police to taping down the button on our horn and lobbing it like a noise grenade—but I doubt any of it would have mattered. I recently read that “Sailors tend to view powerboaters the way aristocratic Romans viewed the Goths.” That pretty much sums it up for me, and the sailors are inevitably going to wind up with their cities sacked.

Needless to say, we barely slept. The morning brought fog and drizzle, which I usually kind of enjoy but found a little too poignant. We packed up and headed home. 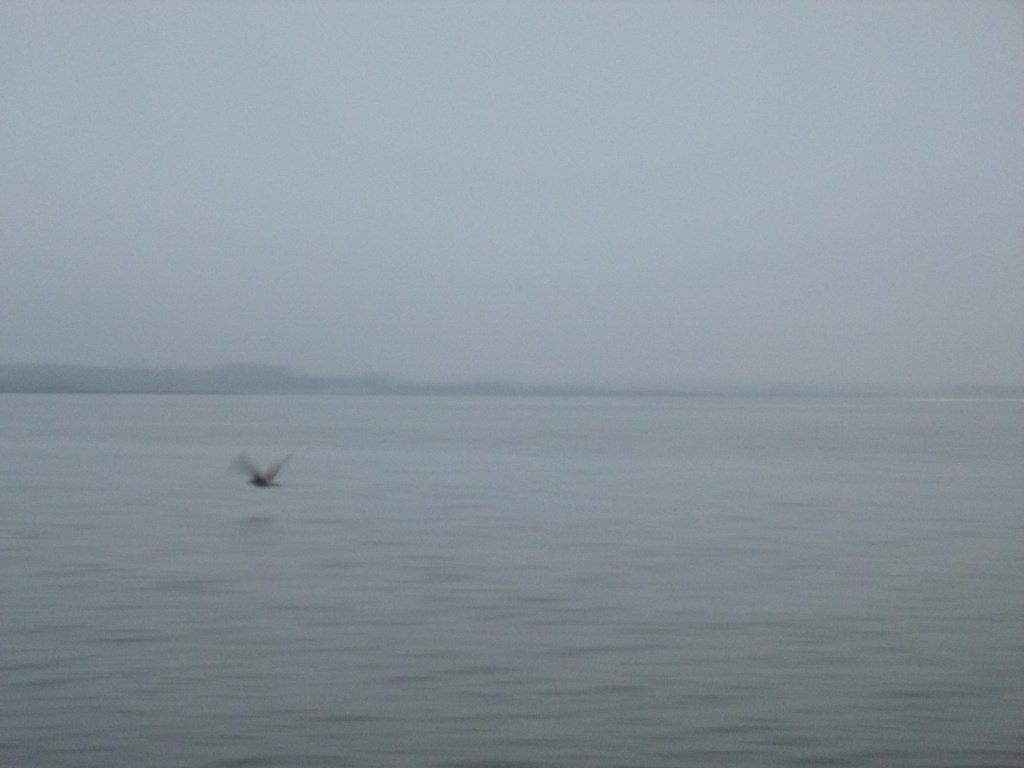 So, we’ll strike Labor Day off the sailing calendar for next year. It will be cool soon, and we’ll have the bay to ourselves, and we’ll sail around in peace with fleece and put this all behind us.