Woody Allen said that 80 percent of success is showing up. Only 8 percent of our boats made it that far.

This Saturday was the running of the annual Tall Oaks-Windjammers Challenge Cup Race. Our club, the Windjammers, competes against the Tall Oaks Yacht Club for possession of the vaunted Challenge Cup: a gold-colored cup screwed to a wooden box with a plastic seascape covering the cup’s orifice such that no victory champagne may be consumed from it. It is truly the pinnacle of sailboat racing for those of us at the nadir of sailboat racing.

The captains’ meeting was at 10:00 at the State Marina in Forked River. Despite our abject hatred of waking up early, Jen and I got up at stupid o’clock in order to get to our marina by 9:00. I had previously been made aware that only two or maybe three boats were going to be able to race from our club, and was holding out hope that I’d somehow be able to help cobble together another boat or two to make a respectable showing. I obviously didn’t think that through, since even if there would have been a couple racers randomly hanging around the docks (which is not a thing), I have no natural affinity for the mix of diplomacy and bro-on-bro browbeating that likely would have been required to recruit them.

At the meeting, the sign-in sheet showed that Tall Oaks would be entering nine boats to our three, and while the race committee remained tactful, the rest of their club was openly giddy about how they would exploit this advantage. It was as if they didn’t notice that I was standing there as they made plans to clog the starting line and sit on our boats’ wind with their their slower boats, since they only needed three to actually race well to win back the cup. I think one guy giggled so hard that he dribbled coffee out of his mouth upon learning that one of the fastest boats, Providence II, had rage-quit our club and switched to theirs. The other representatives of the Windjammers went through the motions of appearing competitive while I quietly contemplated the math of us entering a boat that had never been in a sailboat race.

We drove back to Cedar Creek to meet up with Sailor Steve and headed out to the course, which was somewhere near BB. 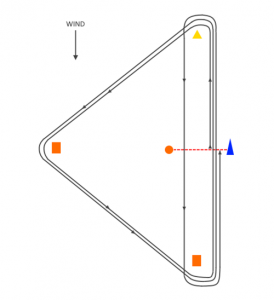 We were in pretty good position for the start. Three Tall Oaks boats started early, but instead of going around to restart, at least one chose to cover Sashay (our scratch boat), taking her well up the left side of the course while most boats tacked to port early and went up the right side. We were just behind Sashay and covered by a different boat, but we managed to gain on them and were able to tack clear ahead at the layline.

We then tacked in front of Providence II, who was steaming up from the right side of the course at full speed. We established overlap and demanded room at the mark as they continued to squeeze down on us. I had to check with Jen to know if we’d even cleared the buoy, since I was focused on the seven tons of boat 12 inches off our starboard side. I couldn’t tell if it was an attempt at intimidation or just hard racing, but it was mighty close. They eased ahead on the first reaching leg, and we remained pretty much in the middle between a clump of fast boats ahead and a clump of slow boats behind. 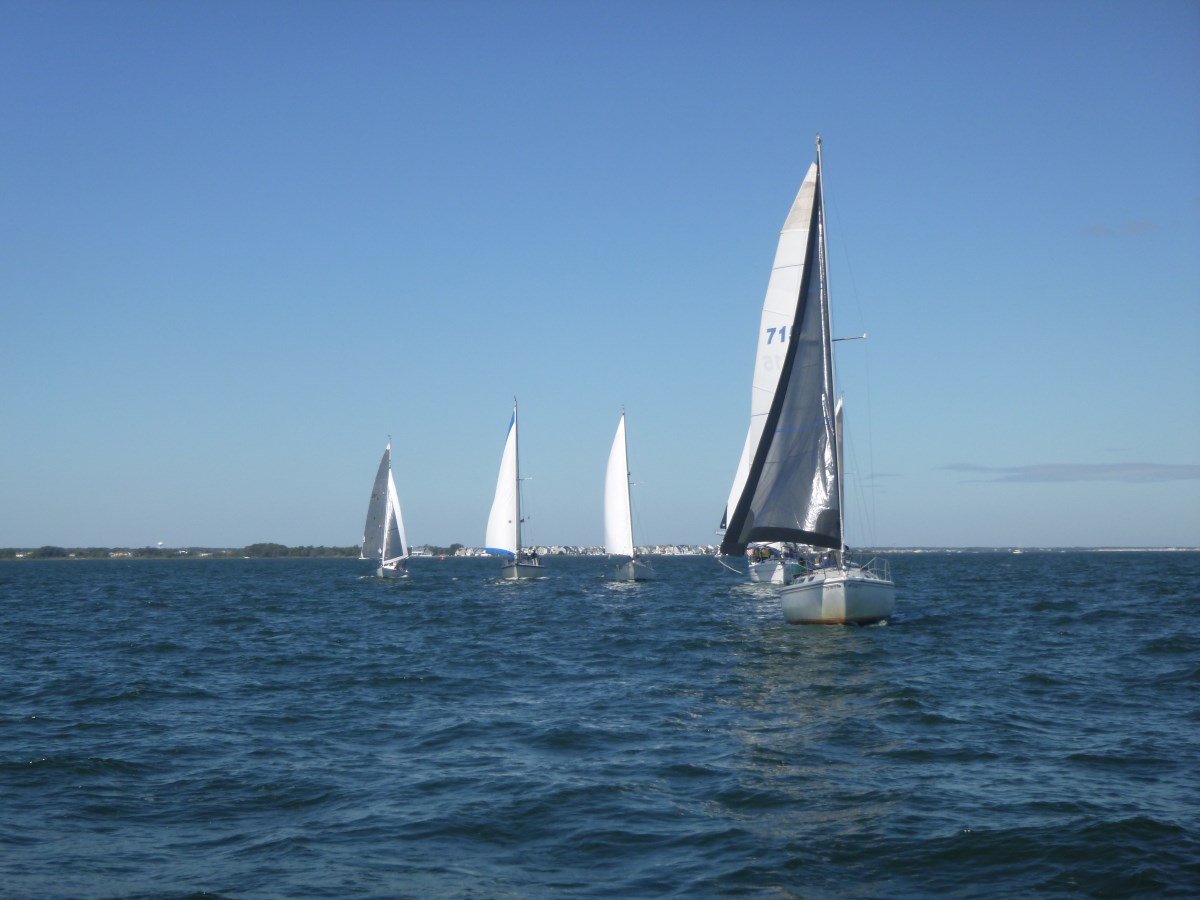 We managed to stay near the middle for most of the next legs, which isn’t the worst place to be with our rating. Jen and Steve were locked in, providing us with crisp, fast tacks. Steve trimmed the jib and Jen handled the main on the reaching legs and in the jibes so that I could focus on steering, which was incredibly helpful. On the second lap, a Catalina 34 crept up on us and disrupted our wind. There may have been some fancy racing stuff that I could have done to minimize the pain, but I eventually let them pass us, which was probably for the best considering that we were in contention for our club and they were not. At least we were sailing faster out of their shadow.

The distances between the boats grew as the race wound on, with the naturally faster boats pulling away from the slower boats. The wind had been light from the start, but continued to decline throughout the day, which wasn’t helpful for us since we were still out sailing on the crappiest air after other boats started finishing. On the last upwind section, I was slow to notice that the wind had shifted and favored the other tack, and then I also misjudged the layline the third time around the windward mark and we had to throw in tacks to clear it, but that was about the extent of our errors. We sailed a tight race on a fairly technical course.

After corrections were applied, Sashay took second (ahead of Providence II), Fortuitous took fifth, and Boadicea came in ninth. Since Tall Oaks got first, third, and fourth—the only boats of theirs that counted toward the club scoring—we were resoundingly defeated and lost the cup.

At the after party, my commodore ordered me to mingle with the other club, who represented the vast majority of the partygoers. I wound up accidentally talking to Tall Oaks’ commodore, and at one point the conversation turned to trying to increase participation in sailing. It was entirely cordial, and exactly the kind of positive discussion that shows up every few months in the sailing magazines and (sometimes less positively) on the online forums, but it was a little too poignant for me considering that my club could only muster three boats.

I started participating in this race as crew in 2010, and we lost a few races in a row back then. I wrote this in 2013, after we reclaimed the cup:

I know that probably no one cares about this as much as I do but I’m really proud that the club came together and got this done. I hear in all sorts of circles that sailing is on the decline—that the old guard is getting older and that young people aren’t getting into it fast enough to replace them and so on. I chalk a lot of that up to nostalgia and I’m not sure that the numbers bear it out, but when my club’s quantifiable racing performance and age demographics start to match up with the laments of the old timers (and the full-time whiners on the sailing forums), it’s only human nature to ponder the pattern.

It feels good to win. It couldn’t have been done with a single fast boat or a lone great skipper or one well-honed crew. It had to be a club-wide effort, and it represents the kind of camaraderie and mutual dedication that I want from a club, even though (or perhaps especially since) that kind of team stuff doesn’t come easily for me. I personally got a big boost from this, and I’m hoping that others will be equally inspired.

Hopefully, we can get back to that next year. For now, all I can do is keep showing up.