We took the week of Labor Day off to go sailing. Weather and various life events conspired to keep us from embarking on any grand sailing adventures, but we still spent a lot of time on the water.

Saturday and Sunday were rained out as the remnants of Hurricane Harvey passed across our region. On Labor Day proper, Jen and I went to the shore to celebrate the unofficial last day of summer. I think a lot of people had the same idea.

It had seemed pretty calm in the marina, with light winds from the southwest, but the wind continued to build and we wound up having to put a reef in to help lessen the weather helm. We tacked back and forth down the bay, chasing after sailboats and running over innumerable powerboat wakes. When we got down near the entrance to the Oyster Creek Channel, we could see a couple dozen kite surfers taking advantage of the quality wind. 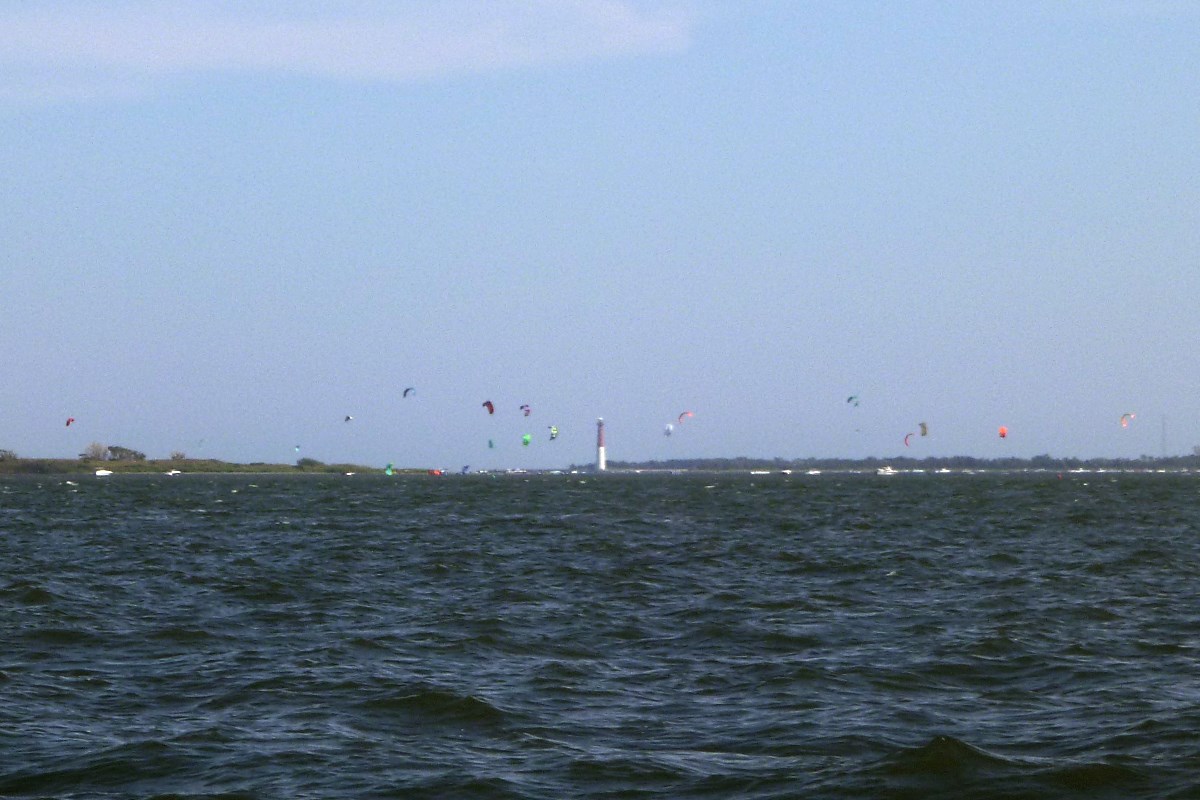 Jen went up and started messing with the pole. At one point, she asked “Which side of the pole is the rope on?”

I paused for approximately ninety seconds, then carefully said “I literally don’t know how to answer that.”

To me, this was like asking “which side of a pencil is the writing on?” The outside? It depends on the orientation of the pencil? The side that you’re looking at if you can clearly see the writing? It’s the sort of devious question you’d get if your Zen master was also an insult comic.

I have previously discussed the legend of the bowman, whose job it is to wander the foredeck in a state of agitated disappointment. The pole is the bowman’s domain, but Jen’s lack of finesse with the pole brought out my inner bowman, which in turn brought out her inner bowperson, resulting in a boat full of agitated, disappointed bowfolk, and nobody wants that. We probably need to figure out a better way of communicating about the whisker pole. 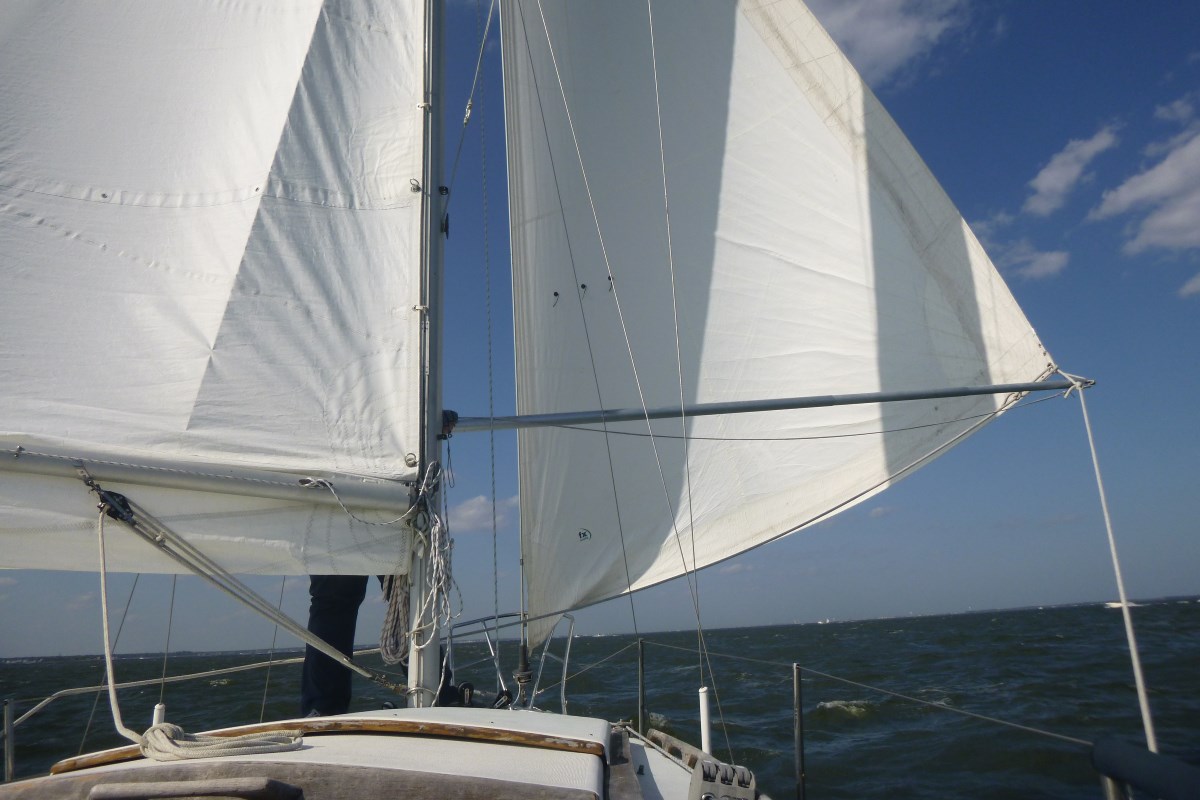 We got it working though, and with wind gusting past 20kts, we were flying. I tried to get a picture of our quarter wave, but I have yet to figure out how to take a meaningful photograph of a wave. 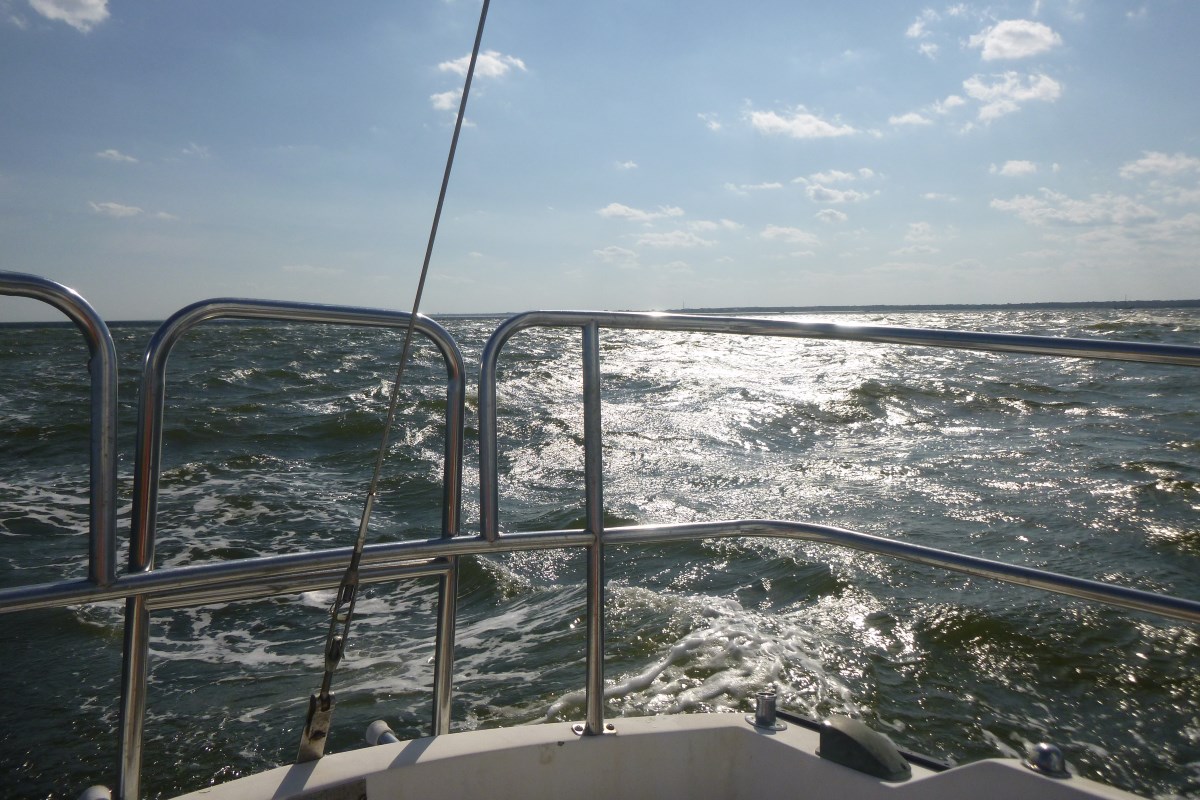 Despite the problems we had with the whisker pole, we mostly had a good time, and while Labor Day marks the end of summer for the tourists and yahoos, it’s the beginning of the best part of the sailing season for us. The shore will now start getting better with every jetski trailer headed west. 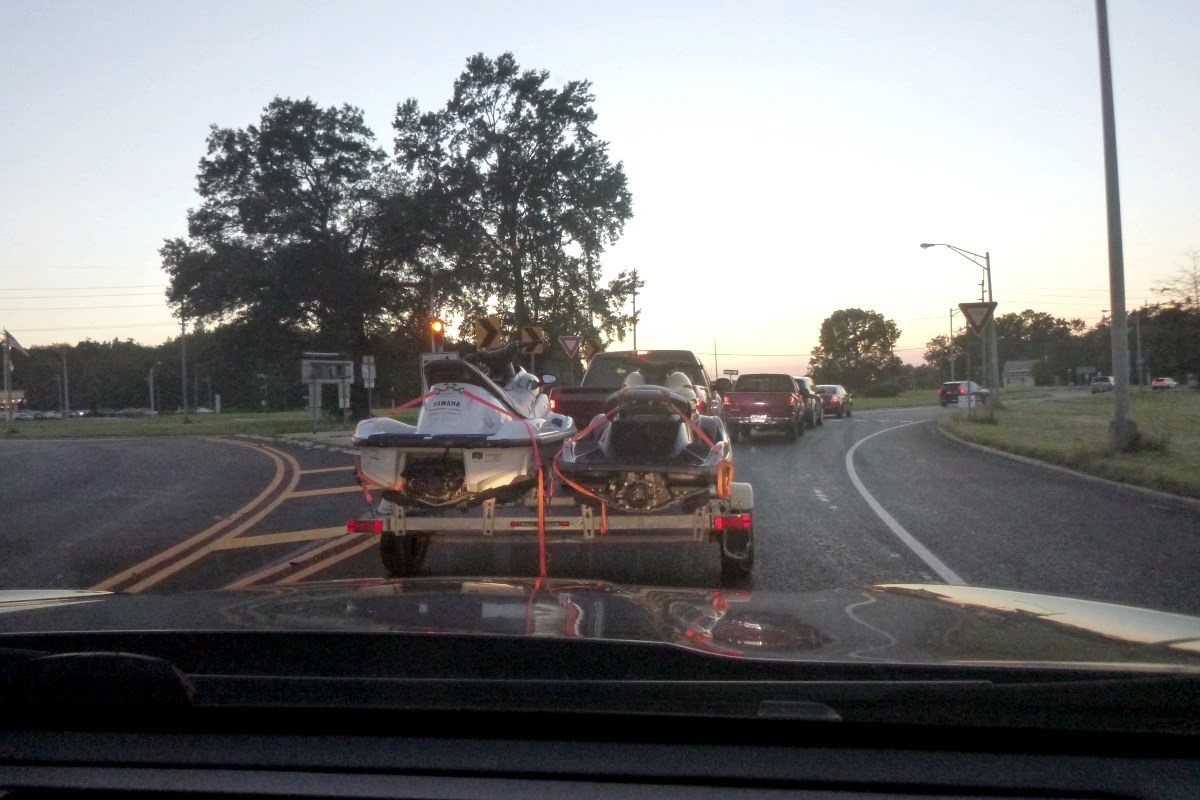 This was the last day of the racing season on Revolution. I thought I might miss it, but since we couldn’t go on a big trip on Fortuitous, I was able to attend. One of the things that kept us from taking our trip on Tuesday was 30kt winds and a threat of thunderstorms in the ocean, which translated to 20kts or more and definite thunderstorms on the Delaware River. 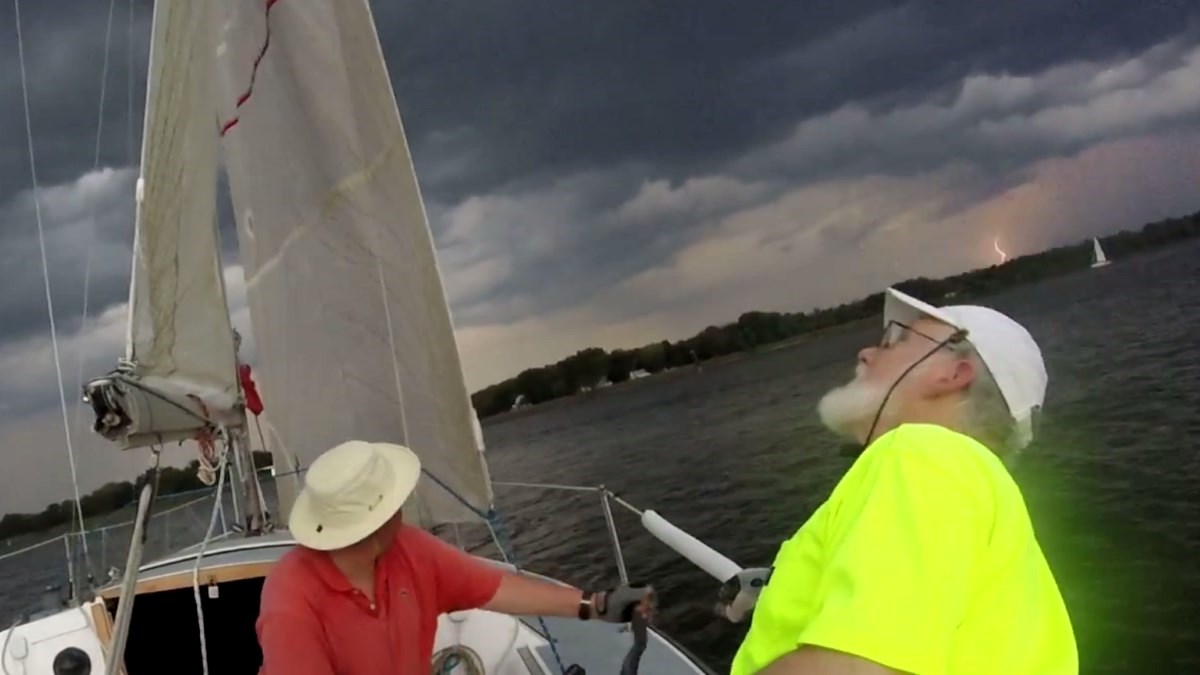 Although the storm was ominous looking, it stayed mostly to our north.

We had a somewhat hectic start, with several boats converging on the wildly favored pin-end at once. We wormed our way in, but when we tacked over, the lazy sheet got caught on the spinnaker pole, which cost us some time. Once we got things sorted out, we put the big 155 to work and chewed up the miles. Sailor Steve elected to go the long way to the island to get out of the ebb current, and in the process, we passed several boats. 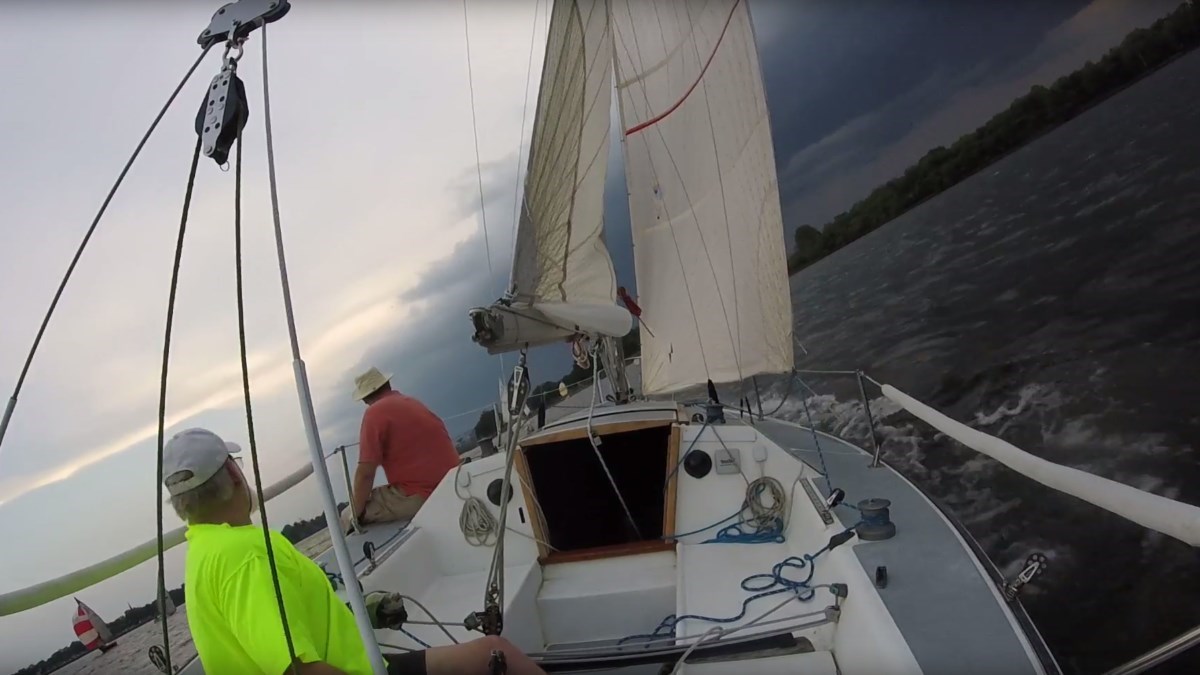 By the second lap, the rest of the pack was well behind us, and it was down to just us and the boat with the ludicrous rating, who we basically followed across the finish line for second place.

Wednesday was another solid day of rain, so sailing activities were suspended. I had previously spoken to our club’s commodore, who seemed to be looking for someone to go on a weekday sail with him, so on Thursday I texted him and drove to the shore in the hope that he would be available. By the time he wrote back that he couldn’t make it, I was already sailing out of the creek, solo, on a gentle westerly wind. 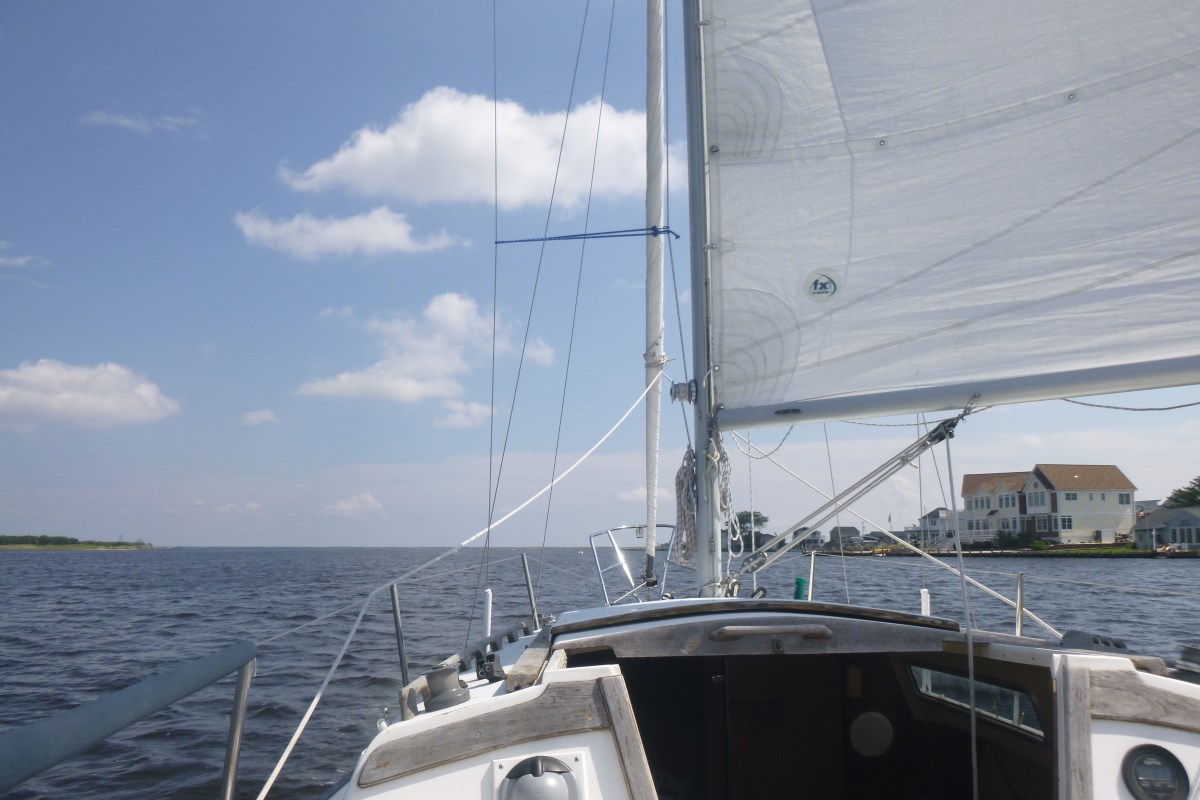 Singlehanding isn’t something that I do very often, but I like to do it once in a while as a personal challenge. I enjoy the process of thinking through how I’ll execute all of the sailing stuff by myself, and I appreciate the solitude and self-sufficiency.

Speaking of solitude and self-sufficiency, I thought of Rimas while I was out there. He’s been missing since July 31. His handlers are holding out hope, and I suppose that anything is possible, although I fear that his disregard for basic sailing and navigation skills may have finally caught up with him. For a brief moment, alone on the bay, having put very little thought into singlehanding, I felt like I could identify with him. Then I pulled a rope and, like magic, my boat sailed upwind in a direction of my choosing. 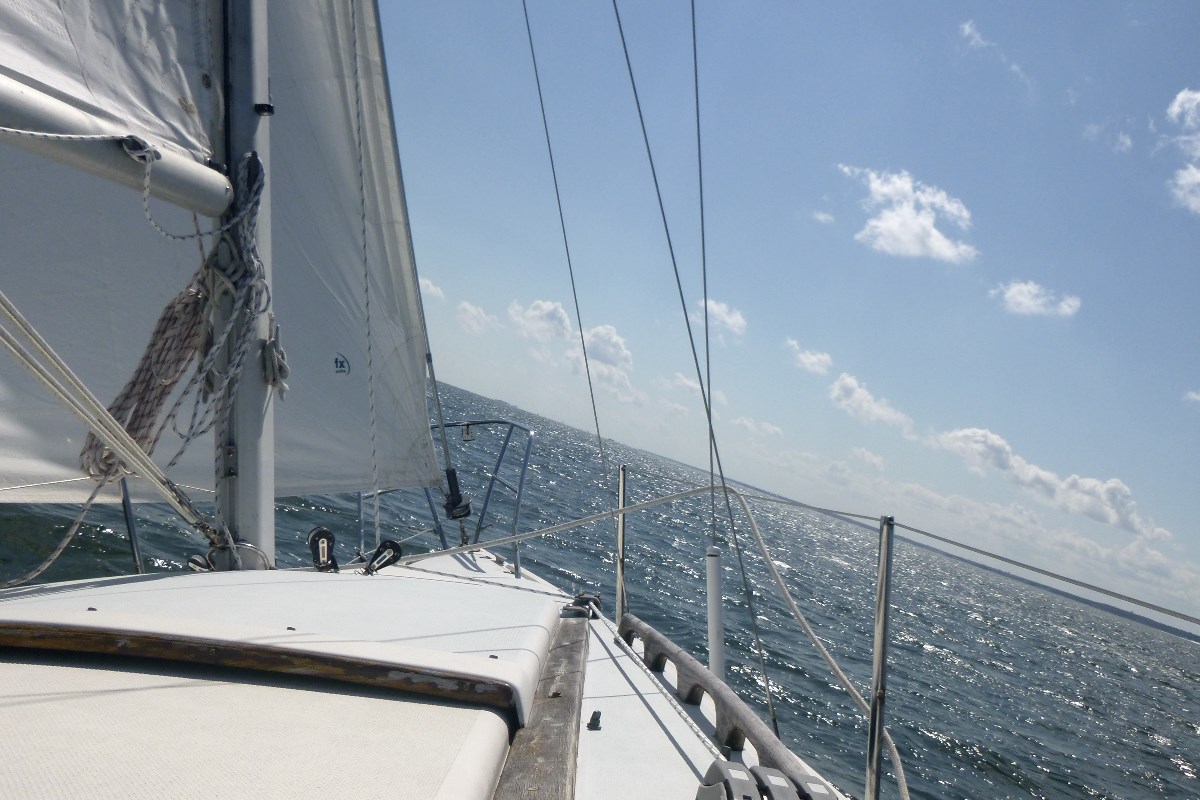 The Thursday after Labor Day is not a big boating day, and the bay was nearly empty. At one point, I saw sails on the horizon and decided to hunt them down like a privateer. I was pretty sure I’d never catch them, but I sailed hard and eventually passed them, finding that they were only sailing a fragment of jib.

I passed them to leeward like a gentleman, waved, then tacked around to head home.

Admiral William Henry Smyth, writing in his nautical lexicon The Sailor’s Word-Book, described Friday as “The Dies Infaustus, on which old seamen were desirous of not getting under weigh, as ill-omened,” so we didn’t sail on Friday. Also on Friday, Jen’s sister went into labor (or something similarly baby-related), some or all of which did not complete until the following day, so Jen hung out in a maternity ward overnight and into Saturday in solidarity. I sailed.

Saturday was Sailfest, a charity regatta (and street fair) run by the local Rotary Club. I crewed with Tiki (in the regatta part) in a relatively long distance race from the Toms River Yacht Club to ICW Marker 40 and back—about 14 miles. The somewhat circuitous course went down the river and then essentially followed the ICW to 40, with some additional buoys thrown in to make sure that extreme shoal draft boats didn’t cut too many corners.

The wind was from the west, making for a downwind start. We were racing white sails, and our start was five minutes after the spin division left under full spinnakers. There were a couple boats ahead of us that I thought were going to close the door on us at the pin—with a downwind start, any boat “ahead” is leeward, and therefore could have prevented us from starting just by sailing down the line (I think)—but we made it and were soon out in front. We began pulling away, which was great, since we were able to stay out of the other boats’ spoiled air. The only boat that kept us with us a green-hulled Morgan 25 that wouldn’t go away. 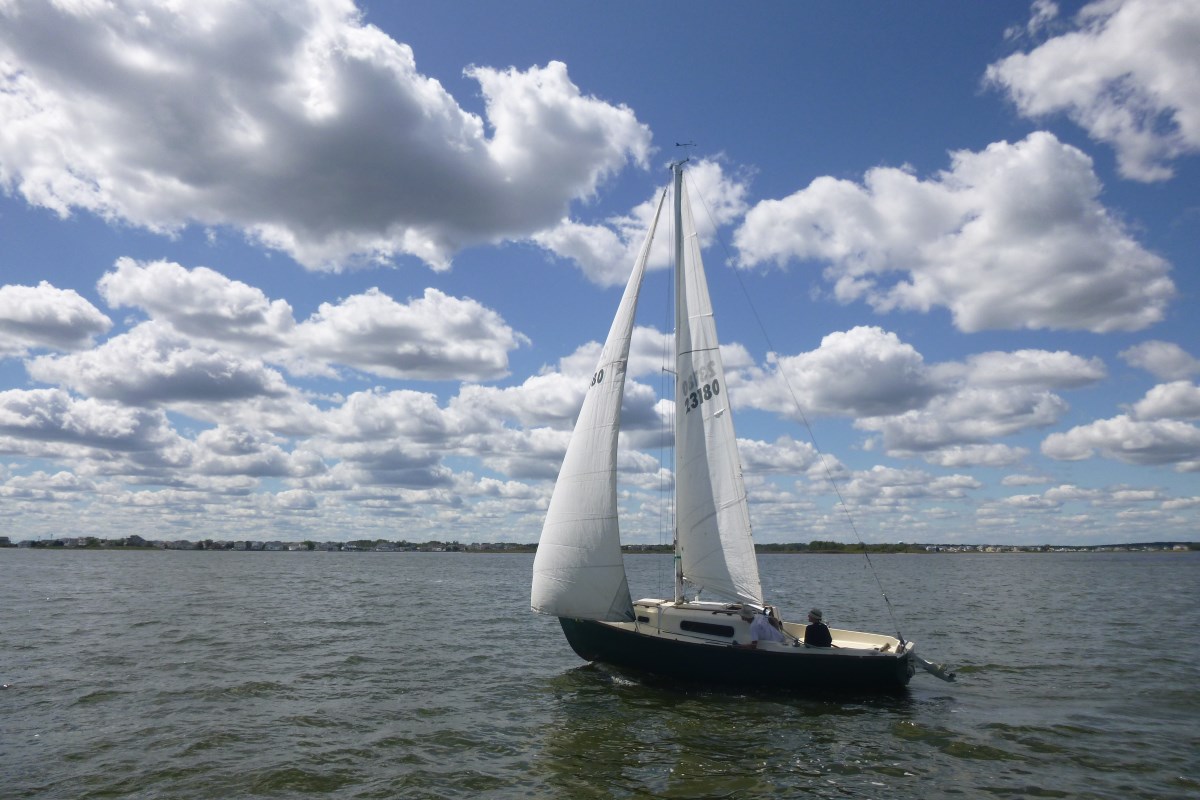 The wind was light and finicky, and as we rounded Good Luck Point, it shifted to the north, which mostly allowed us to continue on the poled-out genoa. There were times when we’d have to drop the pole and gybe the main, only to then have the wind come back from astern. We would occasionally pull ahead of the green boat, but then the wind would die. In the next puff, the lighter boat would accelerate faster, which would allow her to catch up.

At 40, we started heading upwind, which at least gave more of a sense of speed. In that direction, we finally were able to put some distance between ourselves and the smaller, lighter boat. There was a Freedom 30-something ahead of us (not involved in the race) creeping toward marker 36 and we ran right up on their transom. Tiki’s skipper asked me to explain to them that we were racing, and ask if they would give us room to round the mark. I walked to the bow and without really thinking it through and yelled “Ahoy,” which was so funny to me that I almost couldn’t go on with the botched conversation. They couldn’t hear me anyway, but eventually drifted off to the side so that we could pass.

Back in the Toms River, the wind was northerly enough that we could sail straight up the channel, and even once the river narrowed and the channel meandered, we seemed to get a lift at all the right times to make it in toward the yacht club without having to short tack. We still had to throw in one major set of tacks to get to the northern side of the river where the finish line was, but it wasn’t as bad as it could have been if the wind had stayed from the west. We took line honors in the non-spin division, but were giving that little green Morgan 93 seconds per mile in handicap and they finished just under the time limit to take first place. No other boats in non-spin completed the race in less than the 4-hour time limit, so we came in second. 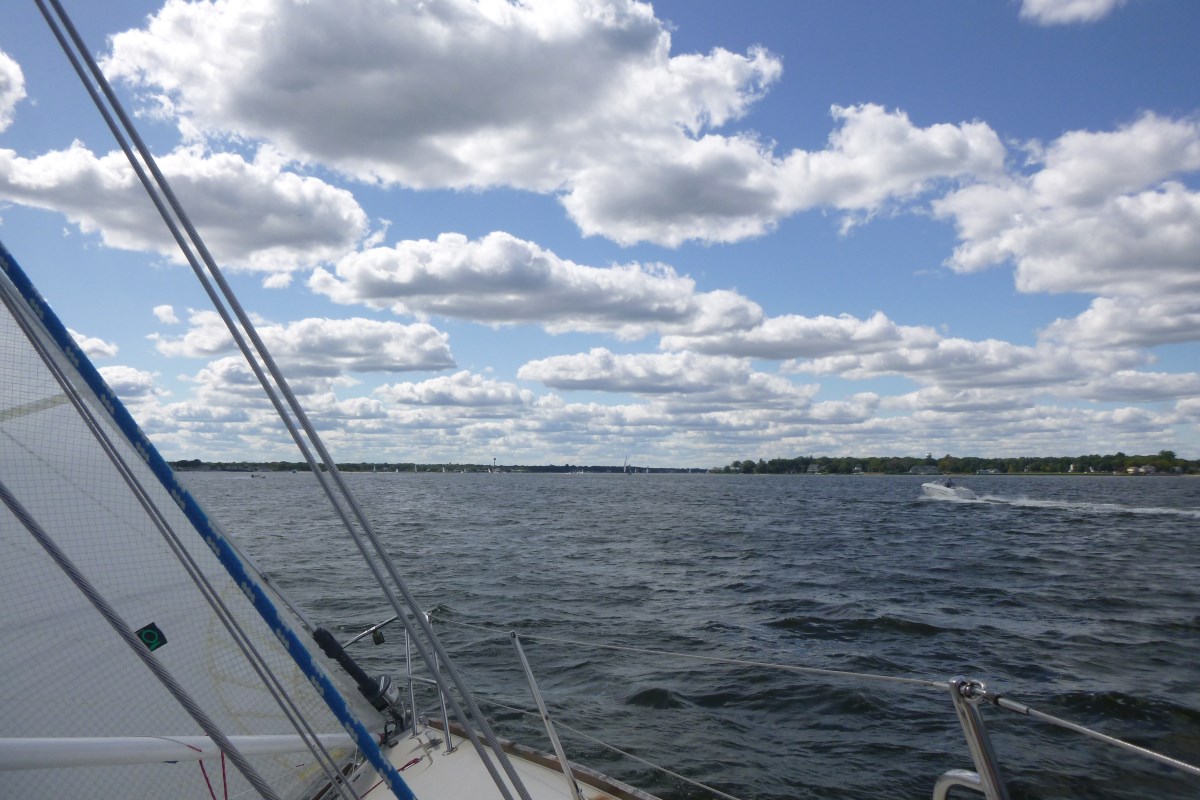 I was somewhat disappointed that Jen and I didn’t get to go on a grand sailing adventure on our week off, but given the short windows of clear weather and our comfort level with the ocean, I think we probably made the correct decision. I still got to sail a ton, and the fall season is just beginning, so we’ll certainly have more chances for some long (or short) overnight stays on the boat.