I love that sailing requires a certain amount of attention. I think it’s what makes it such a great escape from the day-to-day craziness for me.

I sailed last Sunday. Jen was away, visiting her parents in the Thousand Islands, so I brought Matt and Emma along, who have sailed with us before. I haven’t had a chance to write about it because everything else in my life is, as Matt would say, a rock show, but we had a good time. The wind was about 12kts from the northeast, and I tucked in a reef, just because I wanted things to be calm with non-sailors aboard. I put Matt on the helm, raised the mainsail, set the jib for a broad reach, and we started off down the bay. I immediately went below to make some late-morning daiquiris. The boat didn’t feel right, so I stuck my head up and asked Matt to come to port a little bit to keep us from accidentally jibing. Despite the fact that I was making intoxicating beverages well before noon with no qualified watch standers on deck, I felt rather skipperly for being able to diagnose this problem by sense of feel while cutting limes in the cabin. 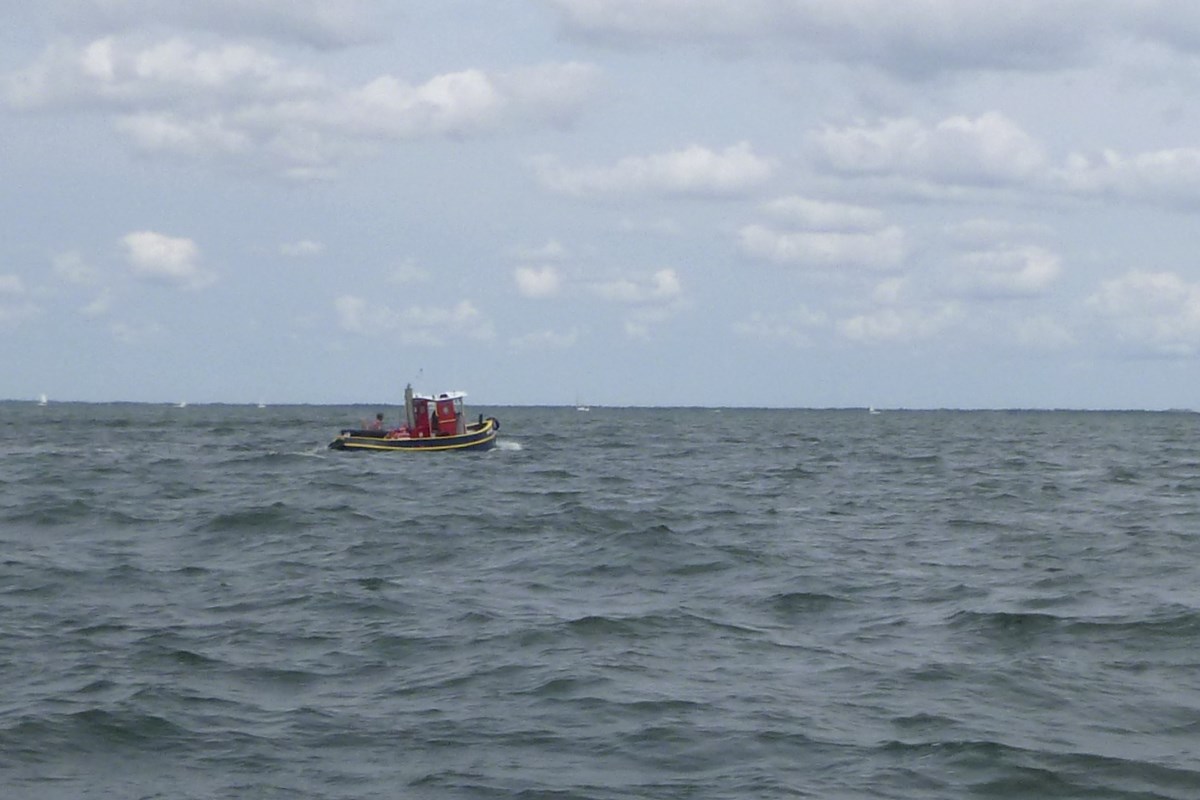 The wind had shifted a little, so I took the helm and pulled the main over to run wing-and-wing the rest of the way. The jib wouldn’t settle and I really wanted to deploy the whisker pole, but we didn’t have that far to go to get to BI. There, we turned around to make our way back. During the tack, the topping lift somehow got caught on the spreader, which was a minor fiasco for a couple minutes. I gave the tiller back to Matt and tried to shake it free, but with the sail powered up (awkwardly) I couldn’t get it off the spreader boot. While I was messing with that, Matt allowed the boat to tack again, so I moved the jib over and the main resolved itself. From then on, sailing was uneventful, and Emma’s level of seasickness dropped from a three to a zero once Fortuitous was sailing upwind with purpose.

We continued north until we got to the mouth of the creek, where we struck the sails and motored into Berkeley Cove for some swimming and boat lounging. 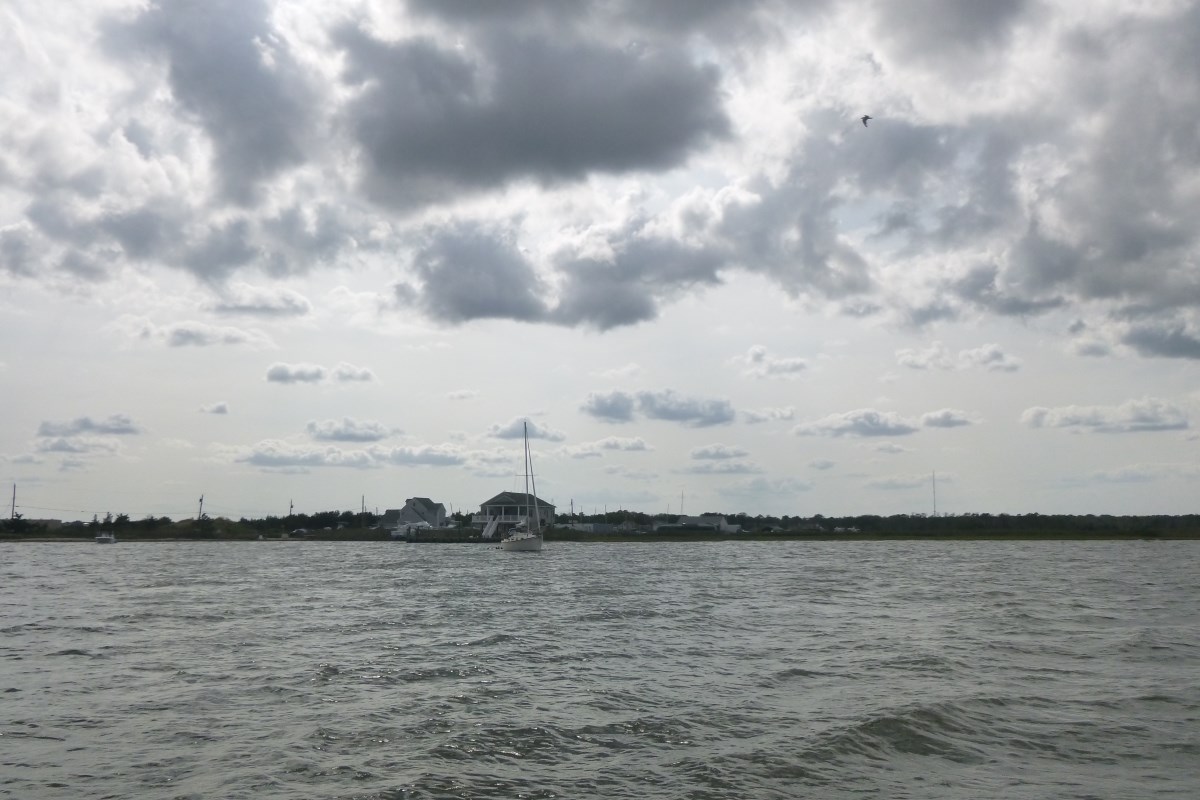 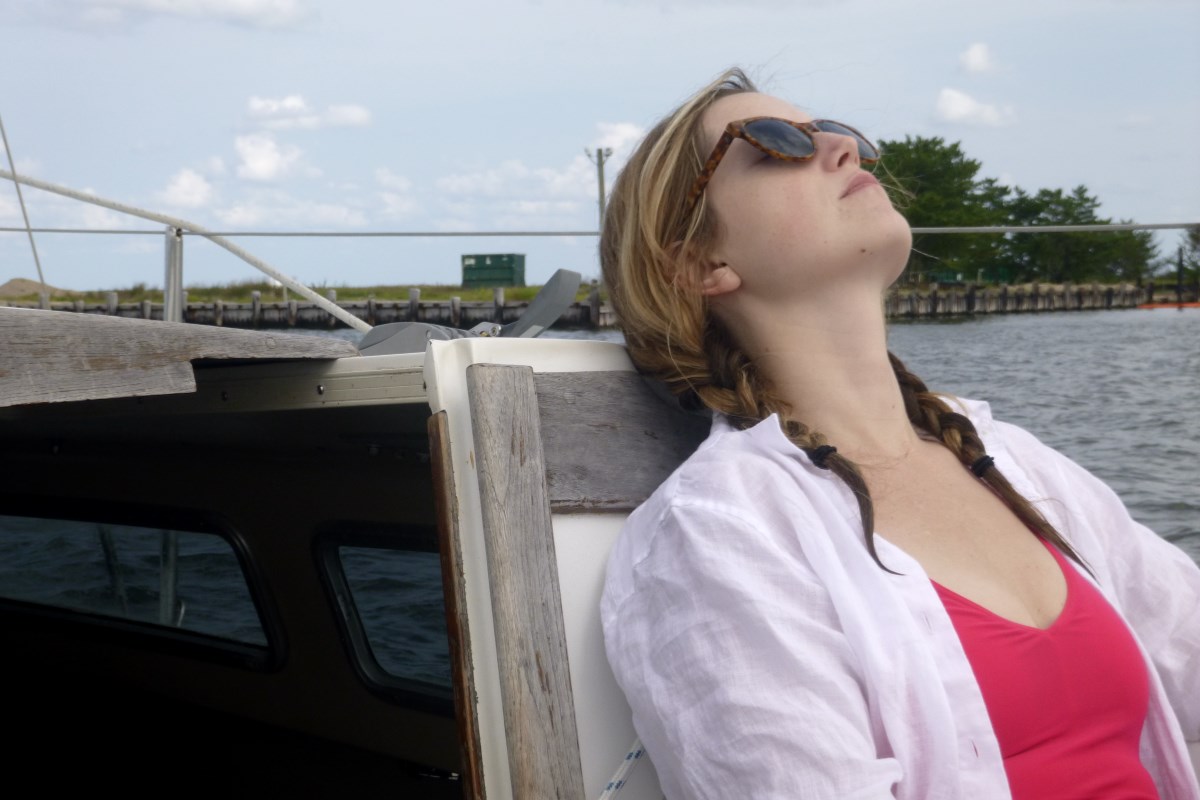 I had a very different experience on Tuesday, racing on Revolution. The weather this season has been uncooperative, with several races cancelled for no wind. That Tuesday, however, there was plenty of wind, gusting over 20kts, which occasionally made the steady rain fall sideways. Some people from the restaurant came over to the railing, while we were prepping the boat.

“You can’t seriously be going out sailing in this.”

I replied confidently, “The only thing we don’t sail in is lightning,” while quietly imagining how sad I would be driving home in wet underpants.

It was cold on the water, and my light rain jacket was allowing me to slowly get soaked. As we puttered around the course on just the main, waiting for the other boats to arrive, I achieved full saturation. It was somewhat comforting to know that I wasn’t going to get any more wet. Nothing mattered once the 155 went up, though. There was no rain. There was no stress. There was no job. There was staying on the boat, and there was trimming for speed.

Revolution was on her ear for much of the upwind leg. On each tack, I would have to stay to leeward to get the genoa trimmed, with water rushing up over the side deck, then climb what seemed like vertically to the windward side to try to provide some ballast on the rail. Downwind, Sailor Steve (wisely) didn’t want us to commit to the pole, so I stood on the wet deck and held out the headsail sheet by hand. Two boats T-boned just ahead of us at full speed, apparently neither seeing the other until impact.

We stayed right on the transom of the boat with the ludicrous rating and claimed our customary second place.

The two sailing experiences were nothing alike, but whether it’s a relaxing sail down the bay or a race in spirited conditions, sailing is a profound escape for me. I just smile when people say things like “sailing seems like too much work,” because it’s specifically the effort that appeals to me. There are constant challenges that need to be met and there is a certain attentiveness required to do it well, and for me, the focus is what tends to drown out the mundanities of daily life. The daiquiris certainly help too, but there’s nothing like sailing.