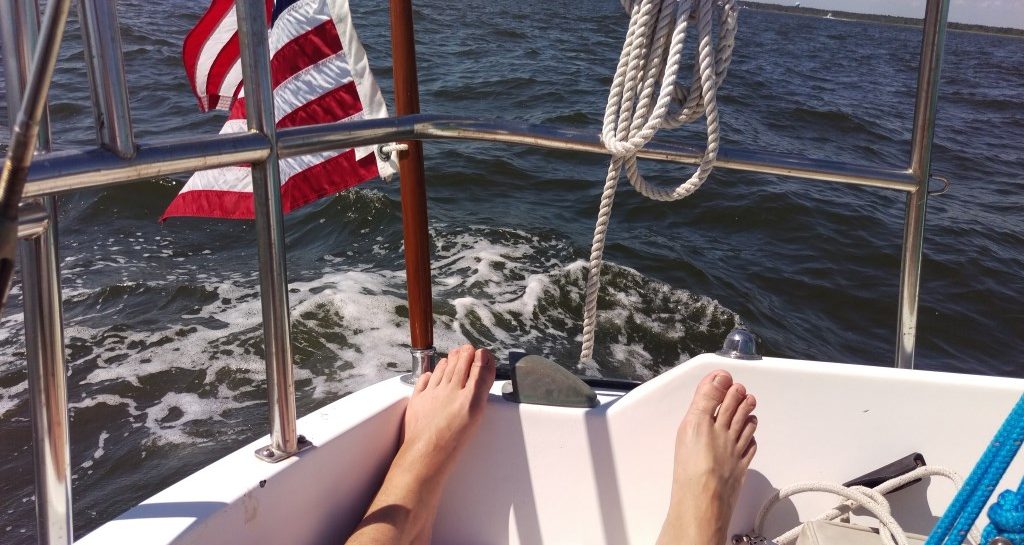 I’d been looking through old log entries and was reminded that we used to sail with other people all the time. In an effort to try to end our completely anti-social streak before running out of summer, we invited Matt and Emma for a spin around the bay.

I’m not sure that we’d ever been so well-staffed trying to leave the dock, and I wasn’t sure what to do with the extra hands. I did explain the spring line in detail to Emma, so that she could secure it upon our return.

We motored out of the creek, came head-to-wind, and put the sails up as soon as we could. The wind was light and we weren’t making great speed, especially with the amount of boat wakes on the bay. Soon the “sailing” became more like bobbing, and Emma started to feel a little seasick. I had forgotten that that was a possibility, and we had no remedies (neither medical nor folk) on board. I did the best I could by moving her from the lazarette seat to the front of the cockpit to hopefully put her somewhere with a less exaggerated motion and gave her the helm. Soon the wind wasn’t enough to keep the sails full and we were flogging around the wakes, so I fired up the engine again and we headed over toward Governor’s Mansion.

I’m not sure that we’ve ever tried to go directly to Governor’s from where were—somewhere around marker BB—so Jen provided navigational cues from her telephone. She told me that we were headed into an area with 3 feet of water. It looked to me like we were in the middle of the bay, and I’m used to the chart being conservative, so I said “I can get over that,” just as we started dragging through the mud. We haven’t run aground all year, but there’s nothing like witnesses to make you put your boat up on a shoal. We backed off, turned 90 degrees and followed the charted deep water into Governor’s without further issue.

There, we anchored and commenced with the cheap domestic lager and swimming. The whole bay must have had low water, because I couldn’t find my ideal swimming depth of “too deep to touch the bottom,” but the shallow water did make it easier to keep a beer above sea level while swimming.

While we were there, the wind shifted around and filled in a bit, so when it was time to leave, we were able to sail. The ride was much more comfortable, with fewer wakes and more power in the sails, to the point where Emma was able to make daiquiris en route. 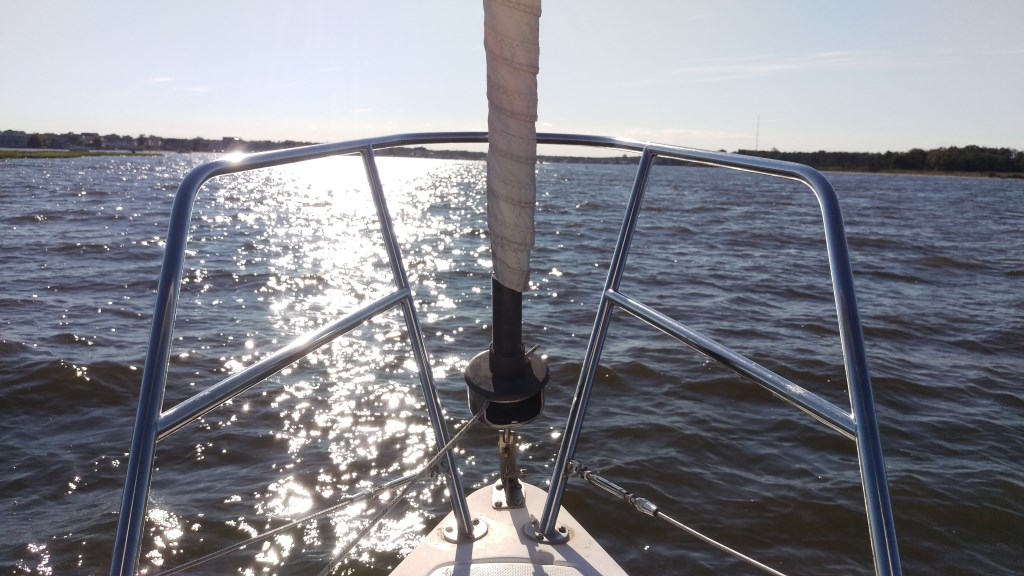 All in all, it was a pretty good day on the bay. We got in some quality boat lounging, we avoided any actual vomiting, and Emma successfully secured the spring line as we pulled in the slip, which brought us to a gentle stop at the pier.