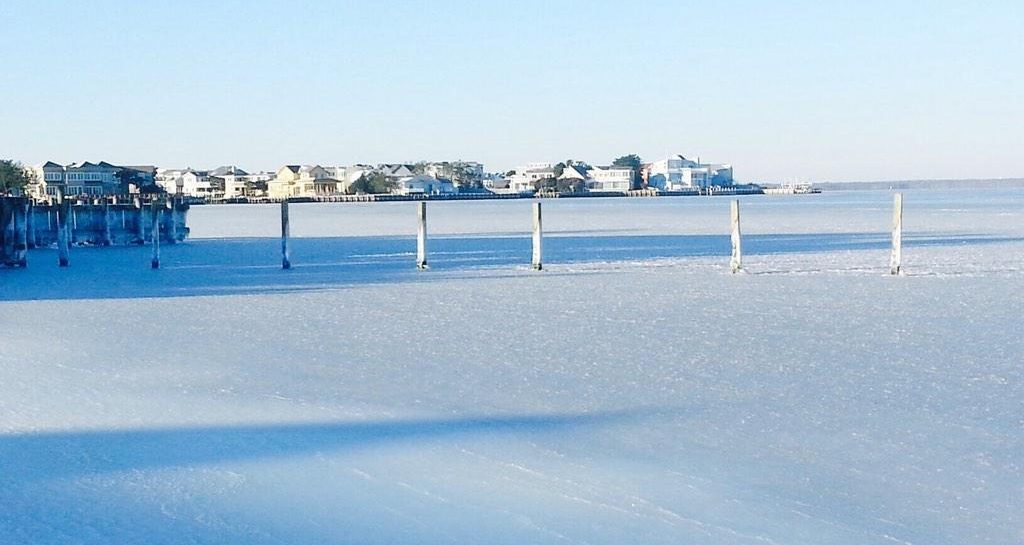 Winter. Man. What a drag.

I think it was 9°F here this morning. It’s been so cold that our brackish bay has iced over. Authorities are warning not to walk on it because the ice isn’t that thick (not that I want to go anywhere near a frozen bay to begin with), but suffice it to say that it’s been annoyingly cold. 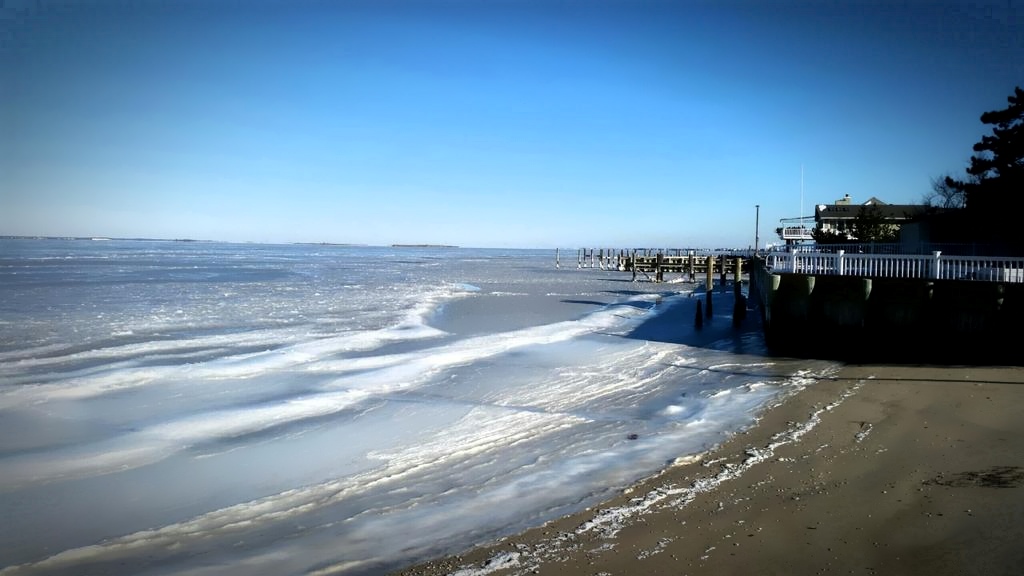 At times like these, I like to go to the photo stash and break out something from a warmer place as a reminder that these bleak months will pass. I did this last winter, and I think it worked out well.

In December, I went on a business trip to Santa Cruz, California. My associate and I could have flown in to San Jose and been closer to Santa Cruz, but there were no direct flights and I had an idea that if we flew into San Francisco we might be able to get something out of the drive. Google Maps will tell you to take the 101 or maybe 280, depending on the traffic, but to the west there are small roads meandering through places with names like “Purisima Creek Redwoods Open Space Preserve” and “Portola Redwoods State Park.” I wasn’t sure what to expect, but thought it might be worth a shot, having never seen a redwood tree. 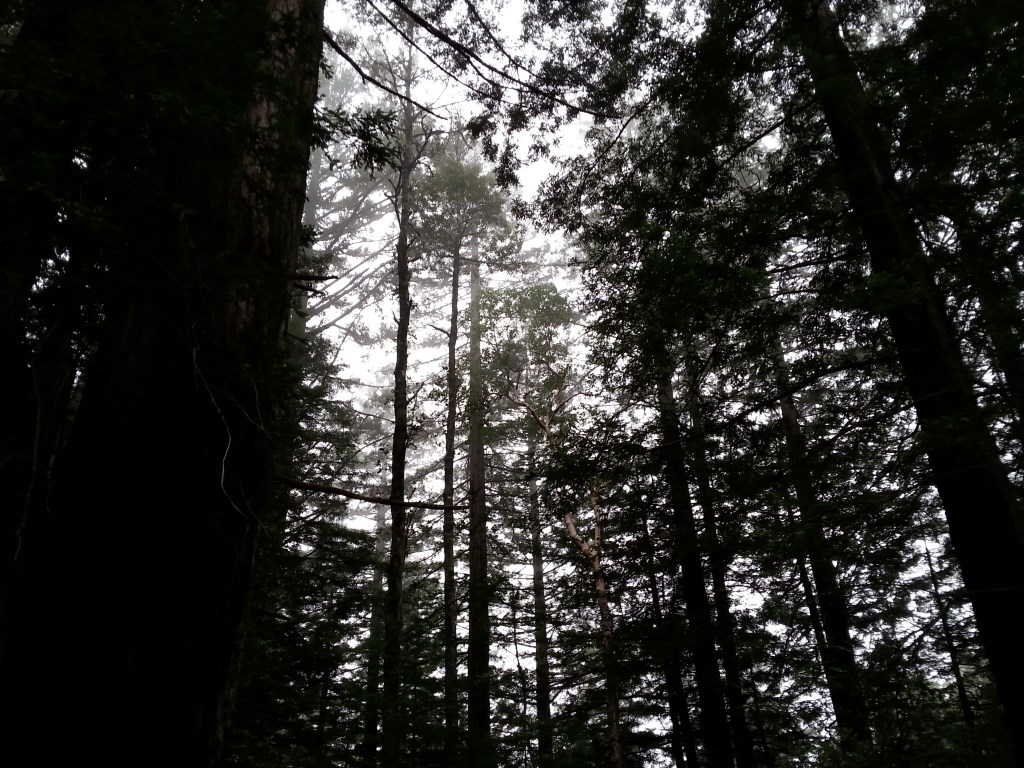 The fog doesn’t visibly move where I live. There, small clouds of fog and mist passed between the redwoods at high speed, further warping the scale of the trees. Everything was damp, and the life seemed to stack upon itself—every crust of bark or fallen twig had moss and lichens and tiny colorful mushrooms growing on it. It was serene but not without sound or motion; ancient without feeling static. I don’t know. I grew up in the New Jersey Pine Barrens, and have spent a lot of quality time with conifers, but this was very different. 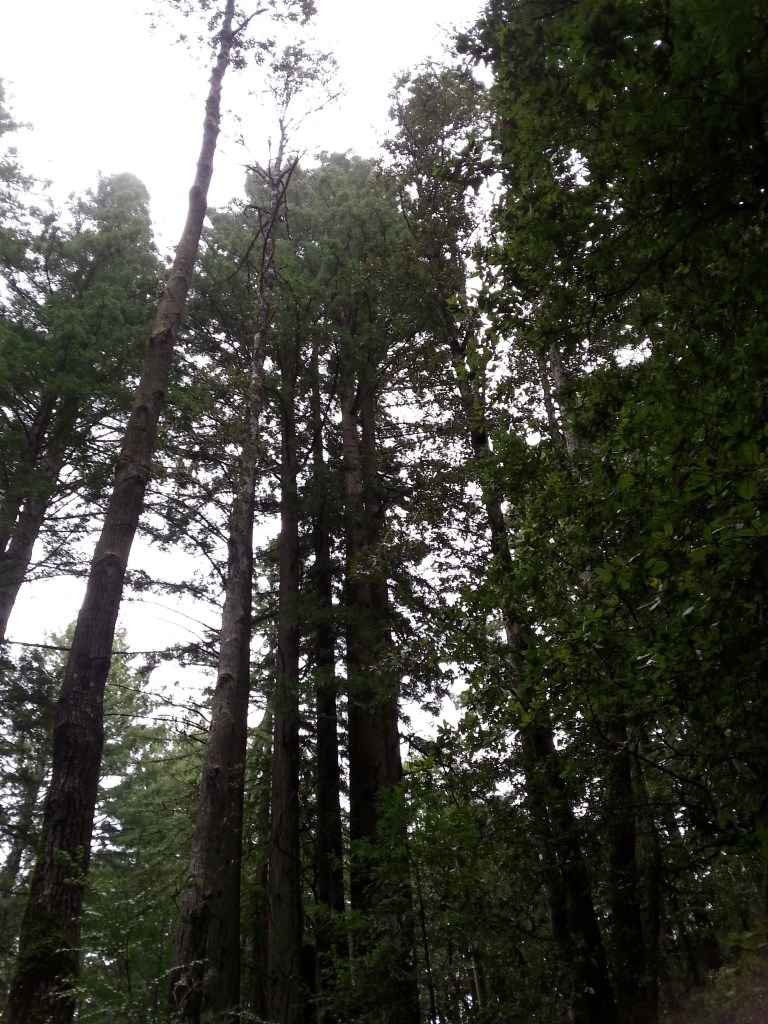 As we moved from grove to grove, we eventually saw a sign for “Methuselah,” and had to know what that was. 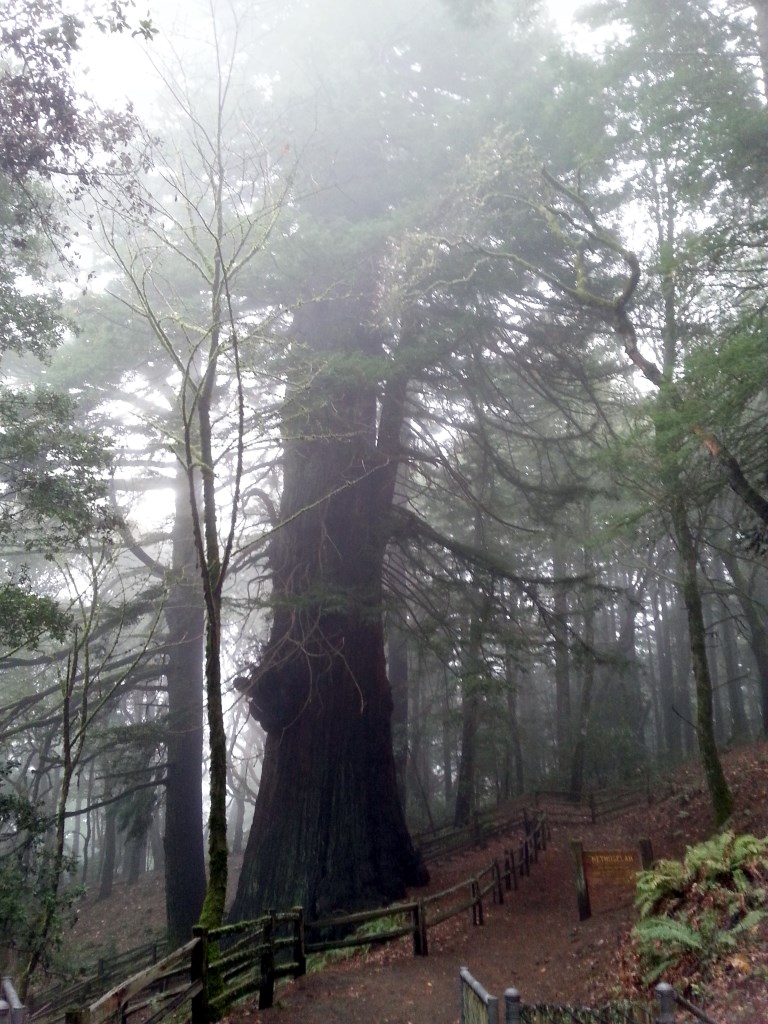 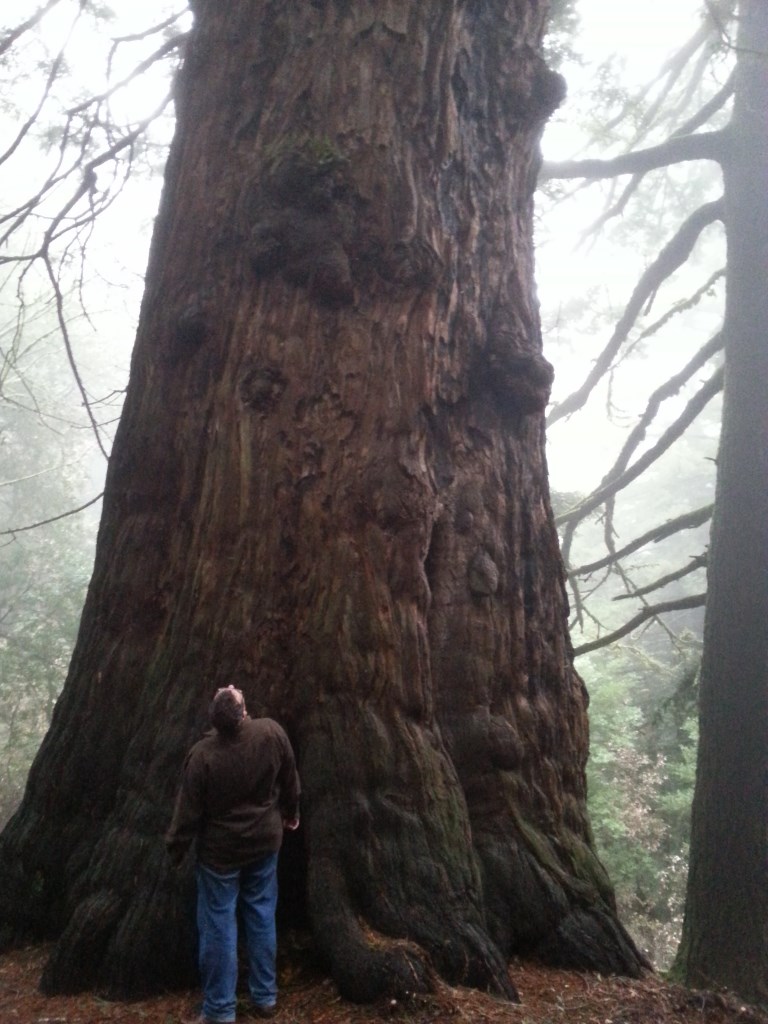 According to the sign, Methuselah is an approximately 1,800 year old Sequoia sempervirens (Coastal Redwood), making it nearly twice as old as its biblical namesake. It was an estimated 225ft tall before part of the top broke off in 1954, leaving 137ft standing. They measured its width at “14ft, above the burl,” which may be misleading because there’s a lot of burl. It’s a great tree.

We pushed it as late as we could before it became time to unwind our miniature rental car on the blind switchbacks and hairpin turns on the one-lane mountain roads to get south to Santa Cruz. We arrived after dark, and although I slept with the windows open, listening to the sound of the breaking waves of Monterey Bay, it wasn’t really until the next morning that I fully appreciated the scene. 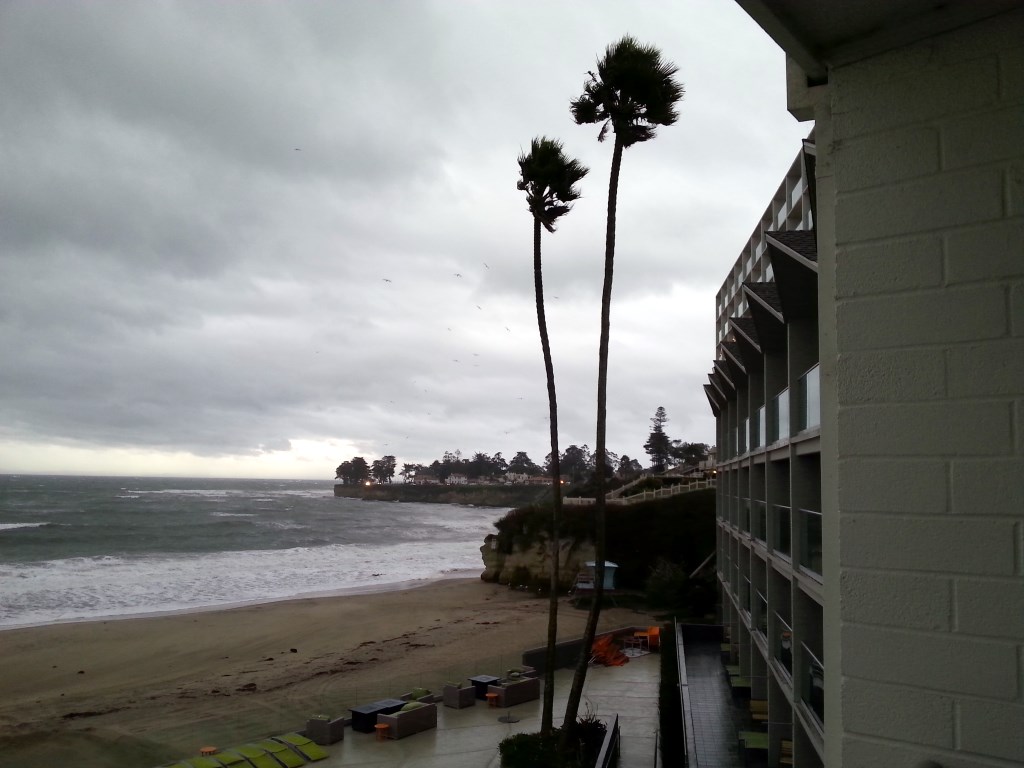 They had one of the worst storms in recent memory while we were there, which brought high winds and torrential rains (much-needed rain, considering their persistant drought). The palm trees lost a few fronds and I think the bay may have come up into the swimming pool, but they had palm trees, and there was a zero percent chance of snow.

After a couple days of meetings, we took the Pacific Coast Highway north back to SFO. As a sailor, the coast was somewhat disturbing…it seems extremely unforgiving. But it was nice to look at from land, with lots of interesting rock formations and cliffs. We took our time and tried to soak in as much as we could. 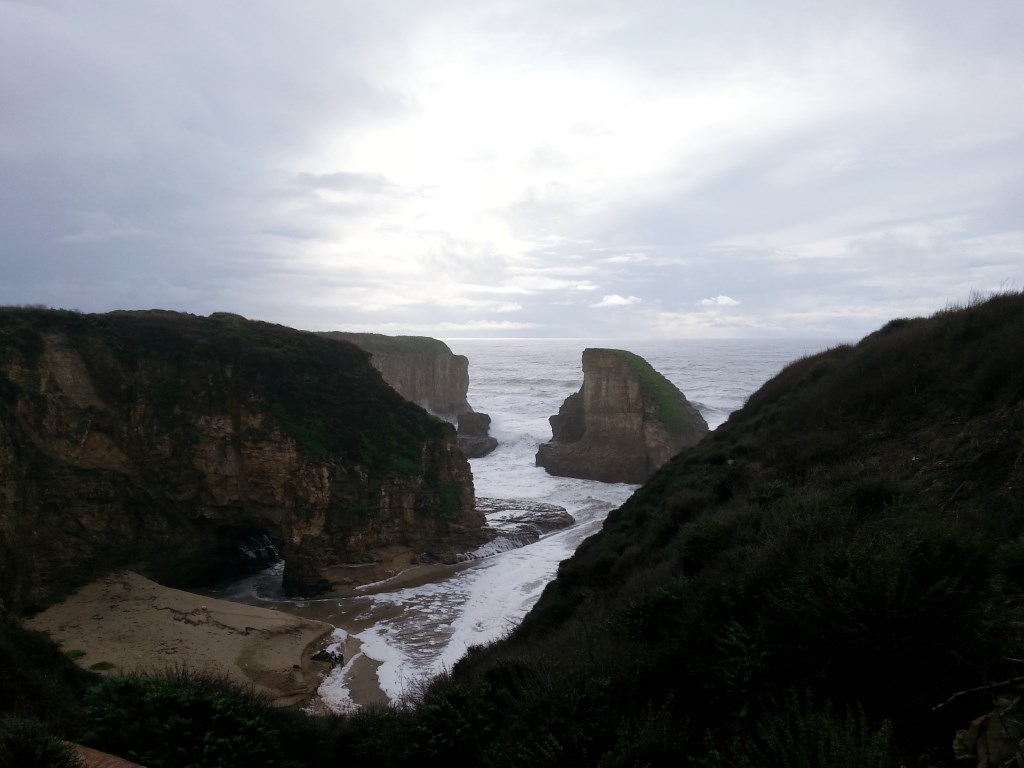 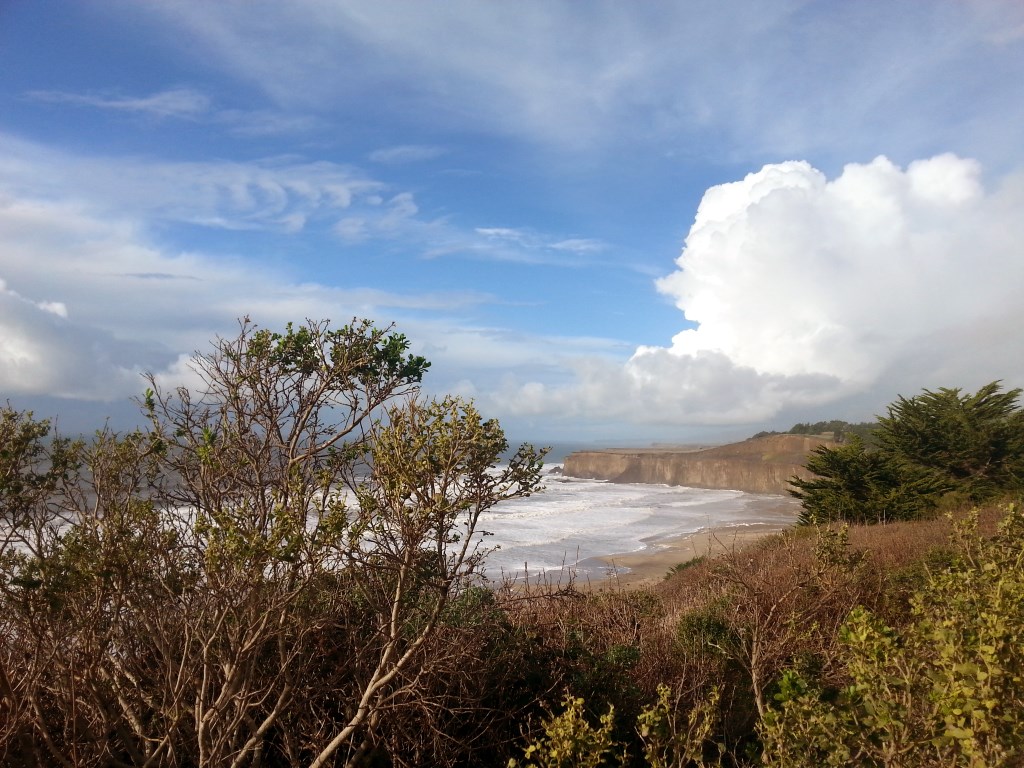 Sailing still seems a long way off, but here’s to thinking warmly.