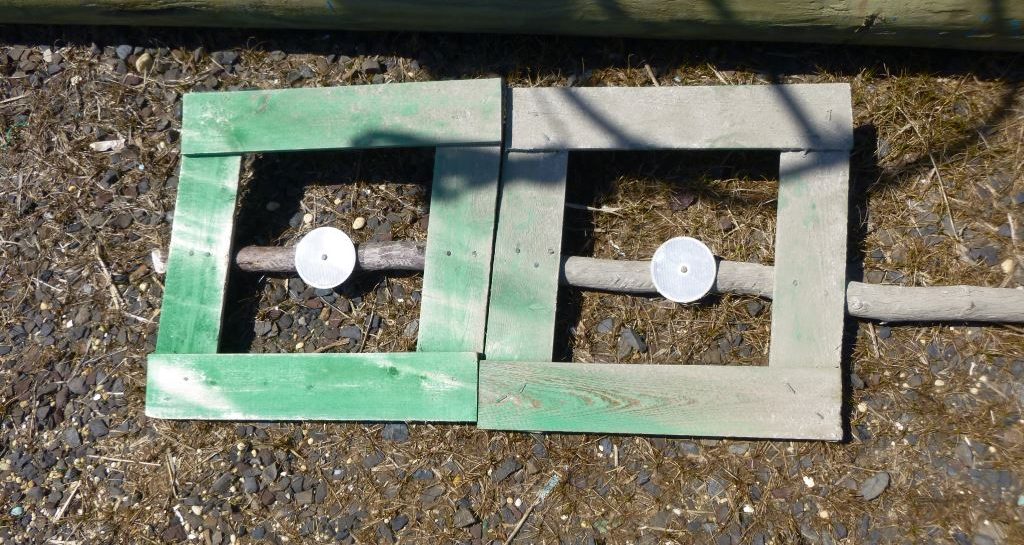 Sailors can be a superstitious lot. I don’t generally ascribe to much of that, but I completely understand the desire to try to impose order on chaos, even if it means that you start blaming things on black cats or bananas. I thought I’d catalog what I failed to heed today, and maybe we can see if any of these catch on as new omens.

Sailors beware!
When skunk is in the air.

This started last night. I thought my neighbors had just gotten into some schwag, possibly to celebrate the expansion of the burgeoning scrap metal business that they have going on in their/my back yard. This morning, however, it was a lot more than an occasional whiff, and was gaining momentum toward a full-on stench. I guess someone ran over a skunk on the main road near our house. Or maybe a bag of them. It was gag-worthy.

When closing the door and the knob falls off,
Regarding your plans: the winds will scoff.

After loading an entire basement’s worth of MVS [Minimum Viable Sailing] gear into the truck, Jen pulled the front door of our house closed and the doorknob fell to the sill with a clang. We briefly looked at each other, and I said “Screw it, let’s go sailing.”

Red on the right may mean “returning”
But green on the ground is disconcerting. 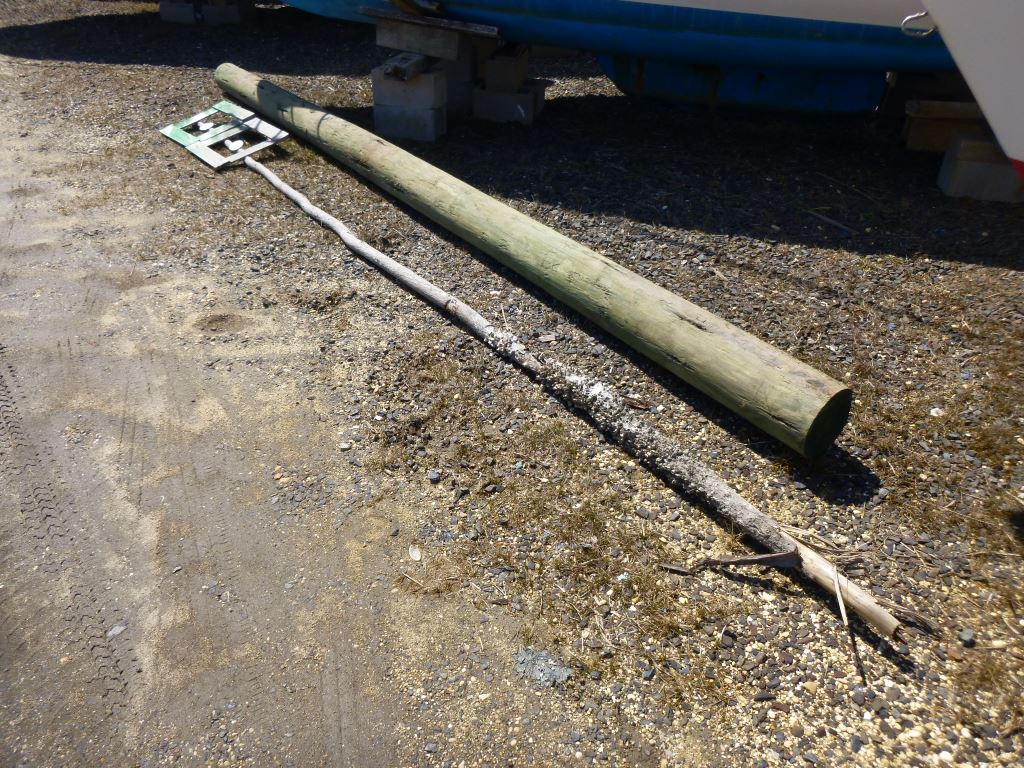 How does this happen? Where is it from? How does it wind up in my marina? Why do we still have channel markers made of sticks and stapled-together shims with bicycle reflectors? Mere mortal mariners were not meant to know the answers to these questions, and asking them is the road to madness.

When there’s a Small Craft Advisory,
It’s actually going to be windy, based on science and stuff.

Ok, this one may be less of an omen and more a proper weather forecast from actual meteorologists.

We knew it was a longshot, but it would have been a momentous sail. Very few people sail this early around here, and for good reason: the weather is temperamental, the water is still in the 40s, and an air temperature in the mid 50s doesn’t necessarily equate to good sailing weather, especially when it’s gusting to 30kts. Which it was.

Still, we’ve seen forecasts that were overreactions in the past, and we needed to get some stuff down to the boat anyway to start preparing for the season, so we were just careful to take all of the required things for sailing, just in case it worked out. We got the cover off and loaded in the essentials, so at least next time we’ll be able to get an earlier start. The wind never let up though, and 30kts does not make for a good shakedown in my book, so we gave up on sailing.

This is uninspiring as video, but I found the audio telling.

We didn’t give up on the day though. We decided to drive over to Long Beach Island and see what was shaking. I’m not a huge fan of the island during the summer, but it’s pretty great in the off season. With the speed limits relaxed and all of the traffic lights set to “blinking yellow” on the boulevard, you can actually get from end to end in a reasonable amount of time, and we drove all the way north to Barnegat Light. 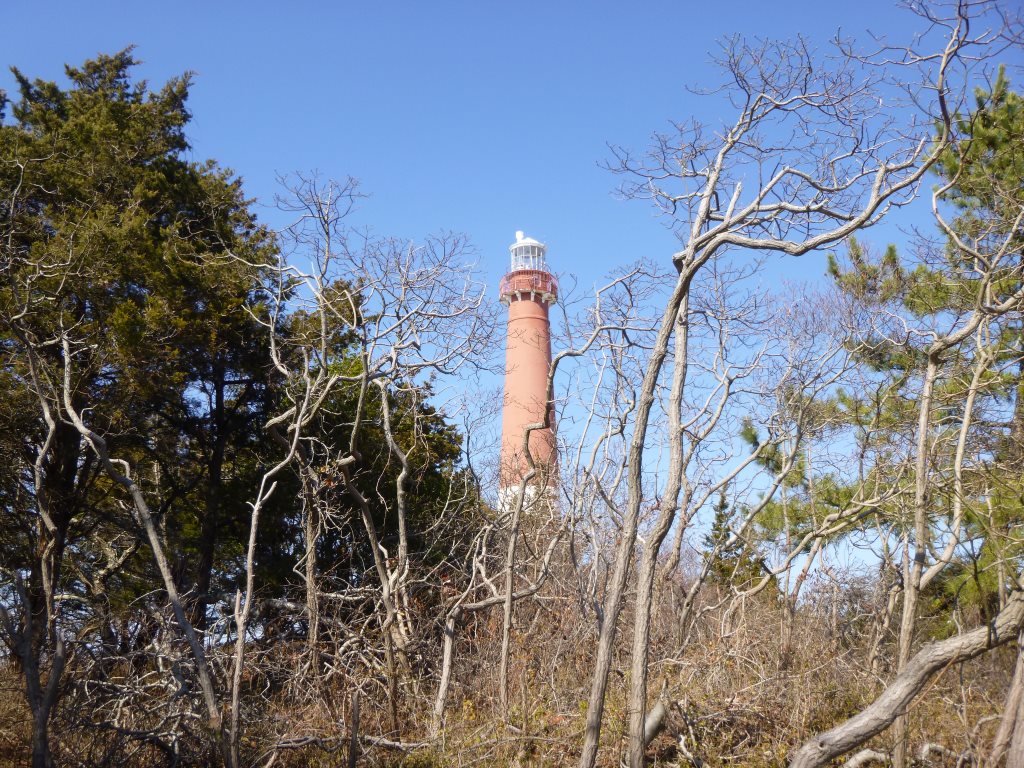 We have lots of pictures of the lighthouse on the boat log, but these are the first from land. The lighthouse was deactivated by the Coast Guard in 1944 and given to the State of New Jersey. It’s now a state park, and there are some interesting nature trails with scrub pine and other tough old dune plants, as well as an interpretive center and some picnic pavilions. 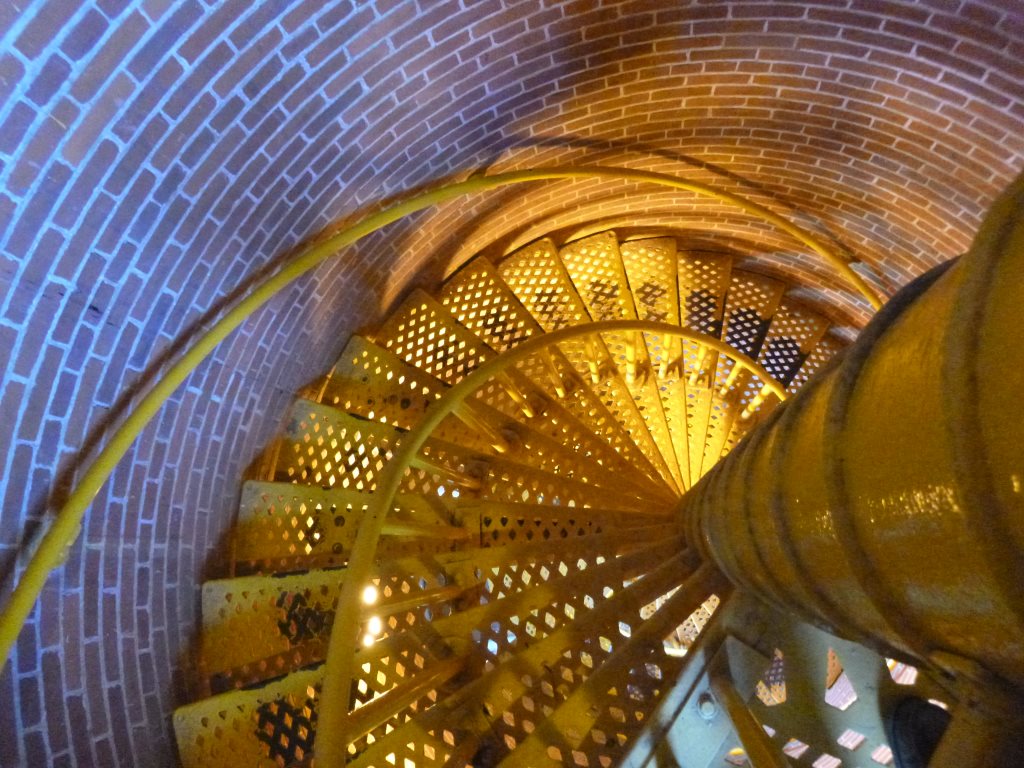 There are 217 stairs to the top of the tower, and I found myself to be a lot more winded than when I did this as a 13 year old. 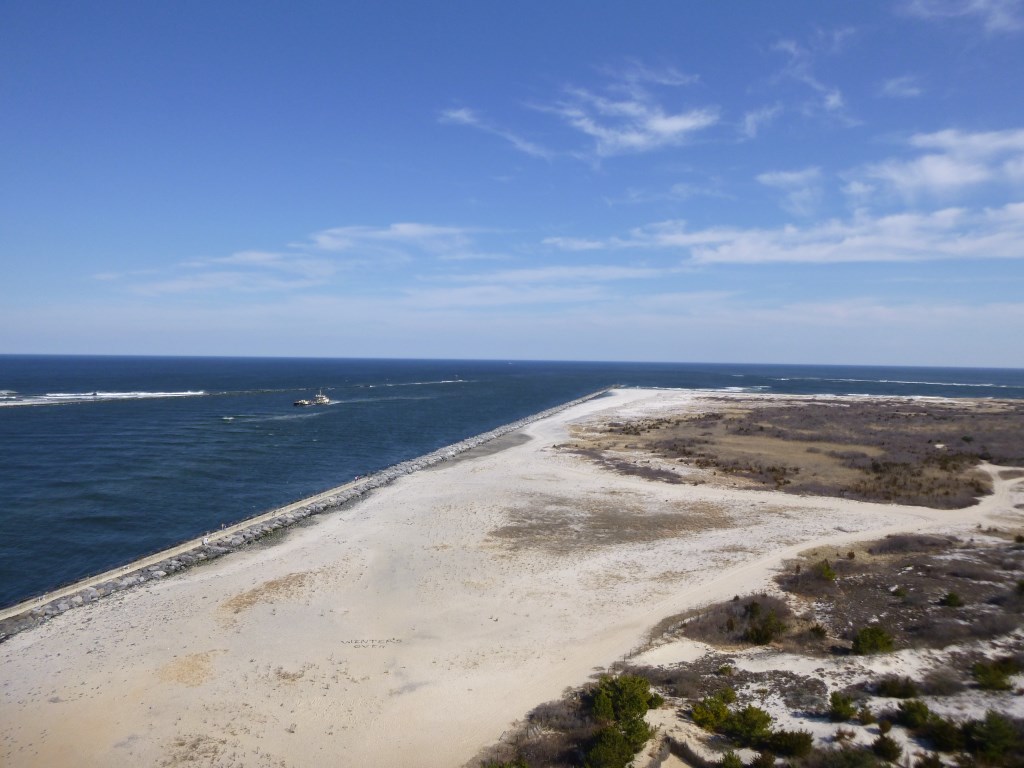 The views from the top were worth it though, even if was blowing a straight gale at that altitude. The photo above is a shot of the Barnegat Inlet with the Atlantic Ocean in the background. The inlet was nasty in that wind, with breakers standing in place for extended periods. I’m not sure what that ship was doing…it was there the whole time, barely moving. It may have been a survey vessel or dredge or something, because it was slowly creeping in, and then did a 180 in the channel, with its engines gunned the point where we could hear it from the top of the lighthouse. 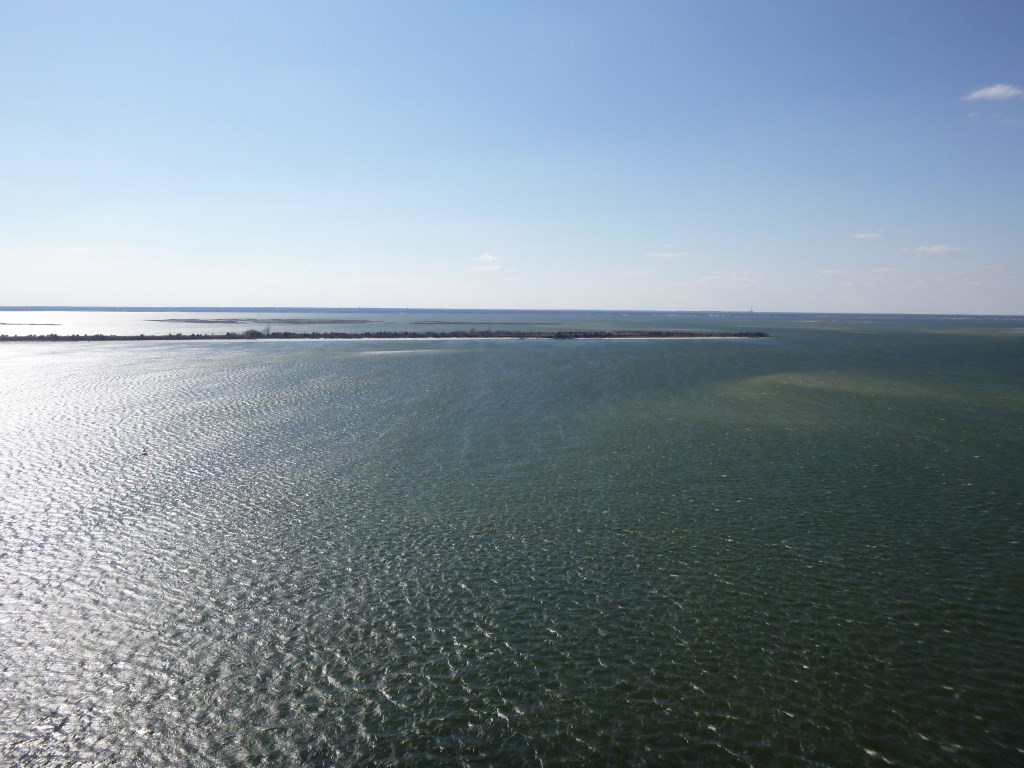 We also got an aerial view of one of our favorite anchorages. We’ve written about Myers Hole before (here and here) and it was cool to see from that vantage, even if a bit unnerving to know how close we are there to copious shoals and sandbars. 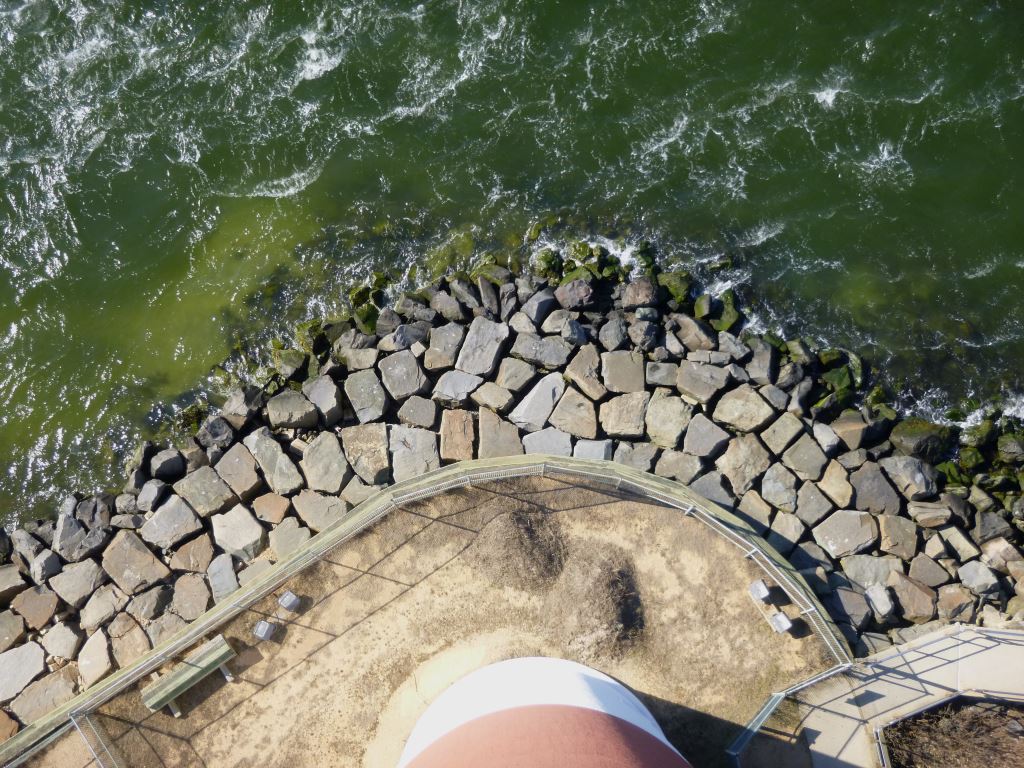 I didn’t bring my new camera, so these shots aren’t the best, but I probably wouldn’t have attempted this perspective with my good camera. 172ft is quite high, and the wind was such that you had to lean into it to stand. I tried not to think about the fact that the lighthouse was built with 1850s technology. Old Barney has seen its share of hurricanes, so today was nothing special, but it was still a bit of a sensory overload to be up there.

So, while we might have missed the omens that were clearly telling us that we weren’t going to sail, we still got some maintenance done and had a fun adventure. There was one more omen that we spotted from the top of the lighthouse (which can just barely be seen in the photo of the inlet, above). I assume that through a complex series of tides, winds, and seismic activity, these rocks aligned like the parts in William Paley’s watch, and I’m taking it as a sign that we’ll be sailing soon: 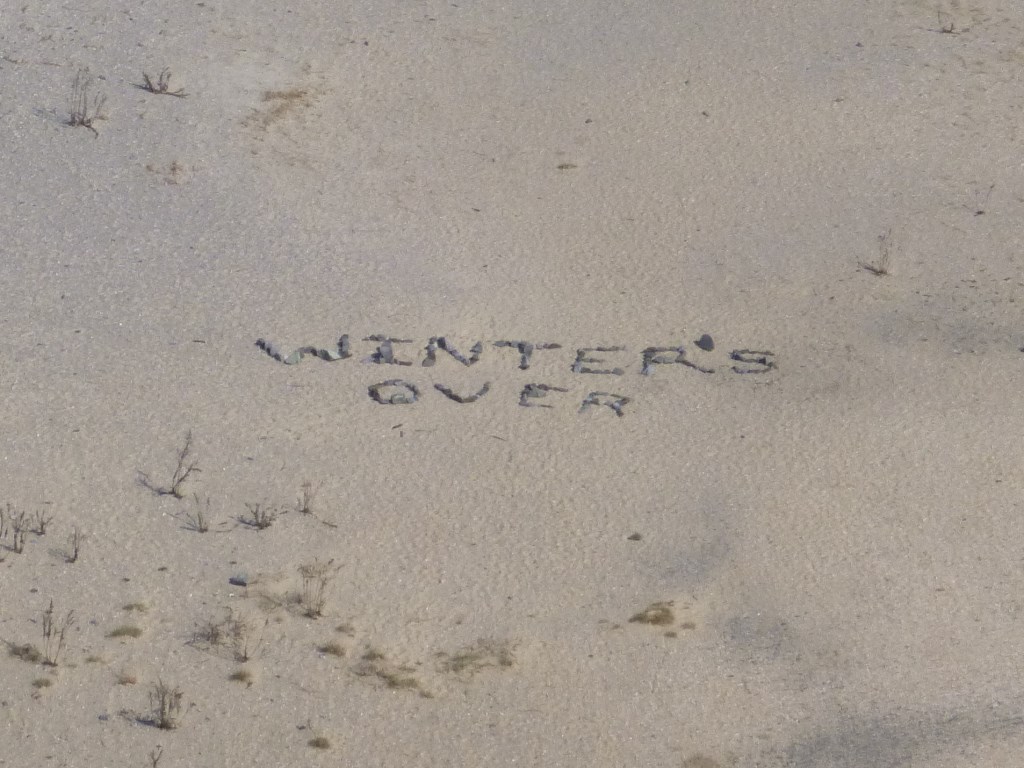 More photos can be found in the gallery: /gallery-barnegat-light