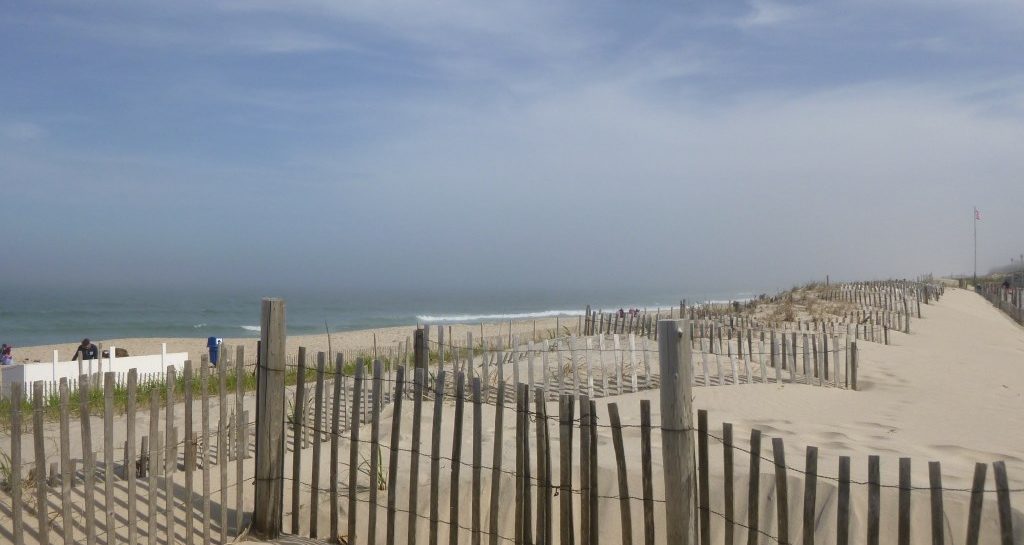 Last year we chalked up an unprecedented second successful trip to Beach Haven in back-to-back years. So it was definitely time to reel in our pride a bit.

This year was a little more intentional though, in that we decided not to go on our sailing club’s annual Memorial Day cruise to Beach Haven (as opposed to getting towed there after “sailing” backwards through the wrong opening of a bridge or trying to manage a Catalina 22 in 40kts). The weather forecast was something like 15-20kts on the nose the whole way down, which would have meant motoring for hours to navigate the winding narrow channel south of the bay, and rain the whole way back. Speaking of rain, we weren’t even sure if we had water-resistant windows. 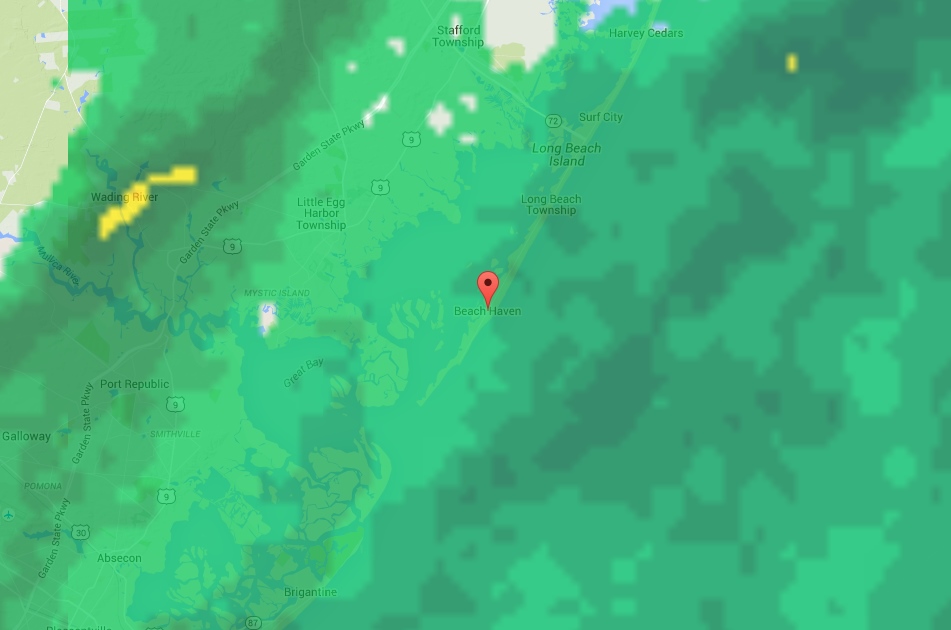 The forecast was right about the rain.

The good news is WE FIXED A PORTLIGHT. Despite cancelling Beach Haven, we still went down to the shore to spend Saturday and Sunday on the boat, and the first order of business was to test last week’s Hail Mary on the aft port-side window. Even with the hose nozzle set to Category 5, the window held. There is one more that’s still leaking somewhat (which, I admit, is like being somewhat pregnant), but I’m confident now that I can fix it without another major surgery.

We loaded in a weekend’s worth of stuff with the intention of staying overnight at anchor. It was breezy at the marina (but not crazy), so we tucked in a reef at the dock. We started the engine, which brought a startled look from a nearby club member, who cautioned us to “be careful out there.” I thought that this was just polite concern, but once we got about half way out of the creek, it was clear that it had been genuine concern.

The water out in the bay was steely gray and the whitecaps had whitecaps. We were noticeably heeled over in the creek without sails. It wasn’t the predicted 15-20kts…probably 25 or more and with a lot of fetch with the wind aligned with the bay. Instead of turning around, my instinct was to tuck in another reef. Of course, our second reef wasn’t rigged, so I decided to go forward and gave Jen the helm…and Jen hates taking the helm on calm days, so I was really priming us for success. She got progressively more nervous; we couldn’t hear each other over the wind and engine; I couldn’t simultaneously direct her, tie knots, and stay on the boat in substantial chop; I was getting soaked as if a clown was shooting me with a firehose while pointing and laughing—we generally kicked off Memorial Day Weekend in the calm, relaxing fashion that we so needed.

I gave up on the reef. I took over the helm, turned us downwind, idled the engine, and we were blown south at 2kts on bare poles. We collected ourselves and tried to think of what to do next. The high winds had kept the boat traffic down, but the few diehards who had ventured out were already crammed into the anchorages with good protection from the south. Neither of us wanted to pound all the way to Toms River. Neither of us really wanted to sleep in the marina. My underpants were wet (with bay water, thank you). We decided to go home and regroup. 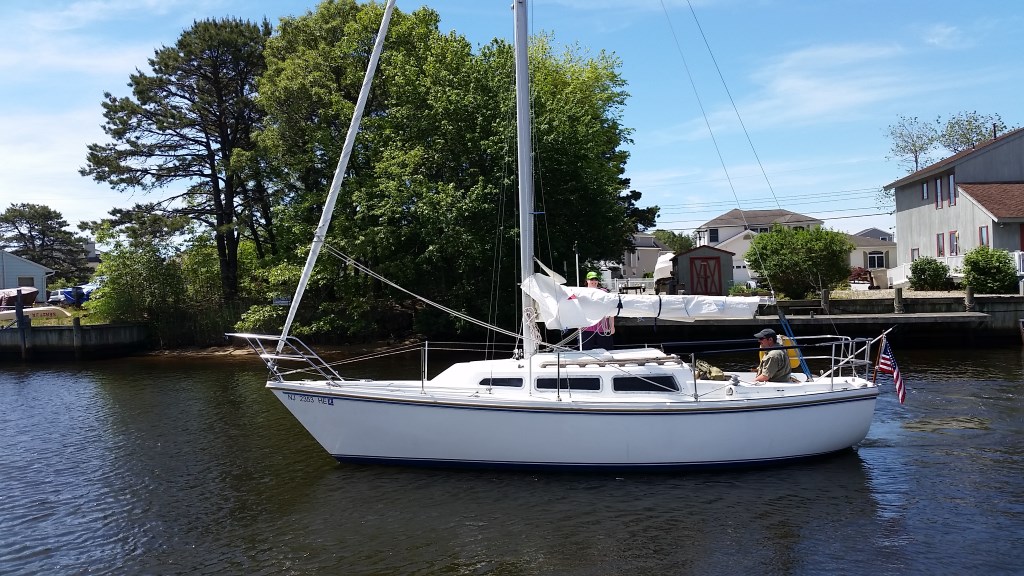 We returned on Sunday with better weather, a more reasonable starting time, and pretty much immediately got sailing.

The wind was fairly light when we started, but quickly built. It wasn’t completely obnoxious, but the weather helm was getting annoying as we tacked down the bay, so we heaved to and put in a reef. Fortuitous became beautifully balanced after that, and we were sailing faster. We were on opposite tacks with a Catalina 38, and the boat on port tack had politely ducked the boat on starboard several times with a gentlemanly wave from the stand-on vessel, but once we put the reef in, we sailed away from him and didn’t cross again (which should never happen with a 27 vs. a 38…if only “You Were Passed by a Catalina 27” had the same ring as “You Were Passed by a Catalina 22,” I’d build a new Wall of Shame).

But we weren’t really trying that hard. We were mostly in lounge mode. Jen was stretched out in the lower cockpit seat while I was steering from the windward side as we made our way down the bay. 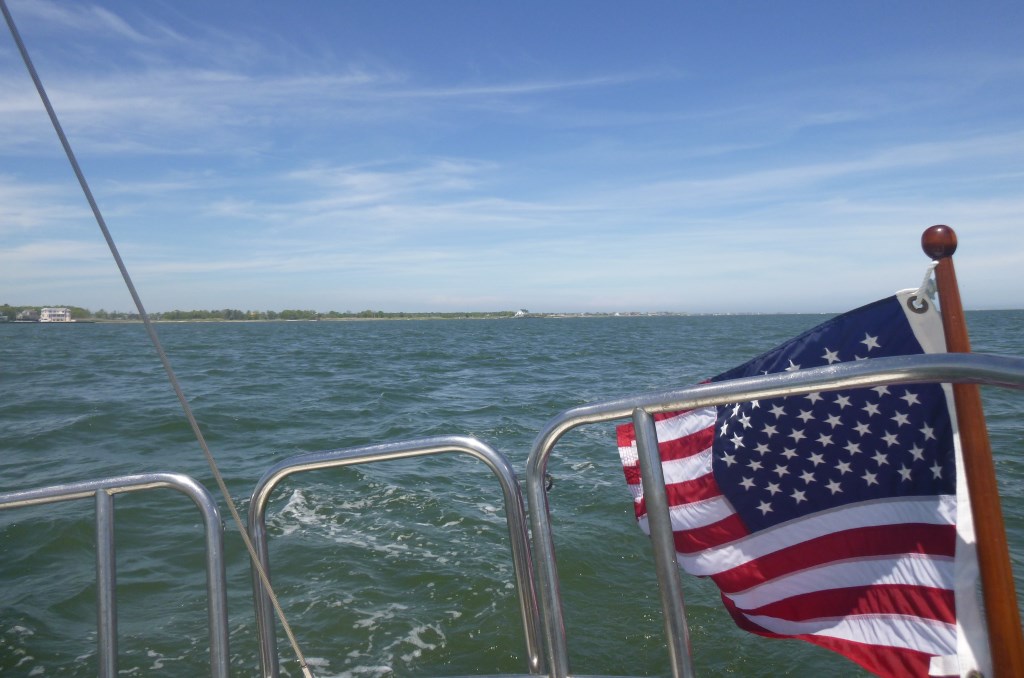 Our sailing club’s usual working channel on the VHF is the same as local fishing club’s, and we usually monitor both that and ch.16. We heard some fisherman talking about “pea soup,” and Jen asked what they were talking about in that context. I had no idea. They were also mentioning place names in the bay that we could see, including Governor’s Mansion and Tices Shoal, so we hypothesized that maybe they meant that it was full of boaters, or that the mud was churned up making for poor water clarity, or that there were such a volume of little kids and Coors Light at Tices that they were actually saying “pee soup,” but the typical meaning of “dense fog” certainly didn’t make sense. 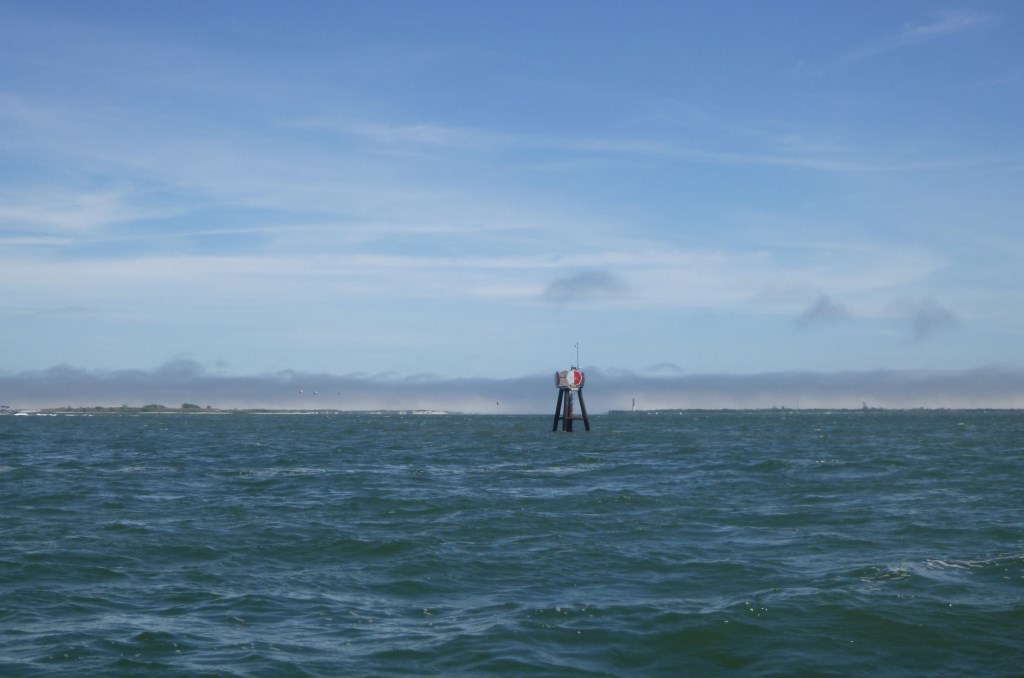 The fisherman must use well-known “inside” landmarks to give their approximate positions to each other when fishing along the outside of the barrier islands, because it was foggy in the ocean. Warm, moist air had been pushed up the Mid-Atlantic by Tropical Storm Bonnie and fog was forming along the beach (and who knows how much farther out). I guess that the bay water was warm enough to not cool the air to the dew point, but the ocean is still quite cold. I had noticed the “clouds” on the other side of the barrier islands all day, but interpreted them as distant normal-height clouds instead of a very close low fog. 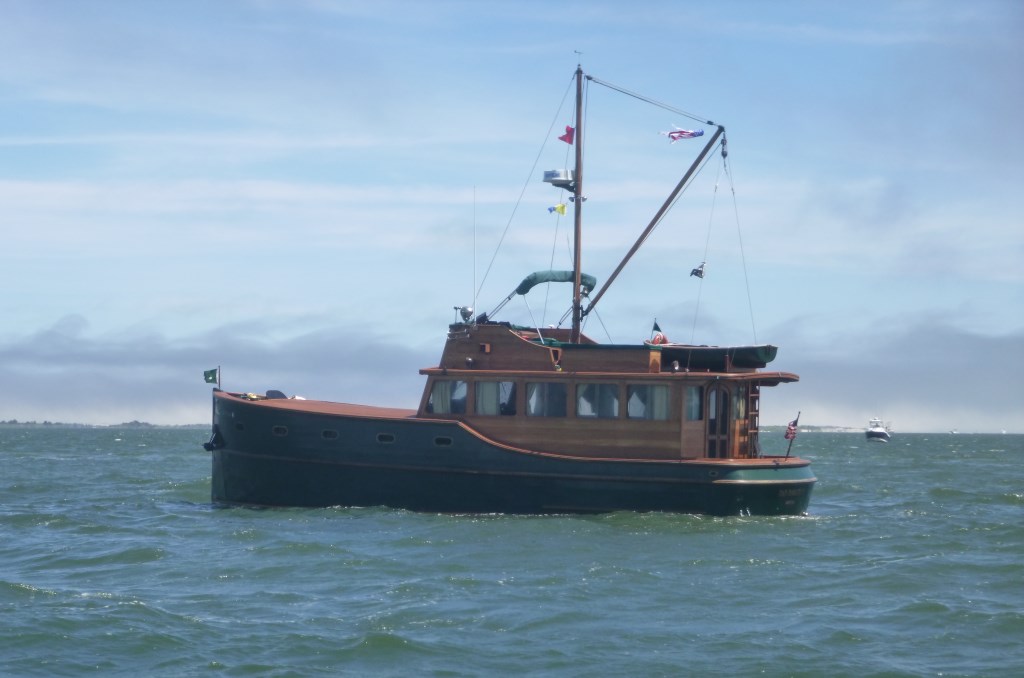 It can be seen in the background of the above photo too (the foreground of which is the custom-built 43′ wooden trawler Bad Donato V).

We were all the way down by Conklin Island by the time we figured this out. Not fully understanding the mechanics of fog or the conditions in which it would spontaneously crop up on an otherwise sunny day, we decided that we should probably head back. We’ve sailed in fog before, and it’s kind of a mess, so we came about, eased the sails, and sailed a nice broad reach back to the creek.

Club members reported seeing fog in Cedar Creek and Forked River, but we must have missed it. The closest thing we saw were little wisps of mist moving just above our mast at high speed. They were difficult to capture well with a camera, because they just look like light clouds at a normal altitude, but they were only about 50 feet off the water and moving so fast that it was disorienting for me to check the windex. 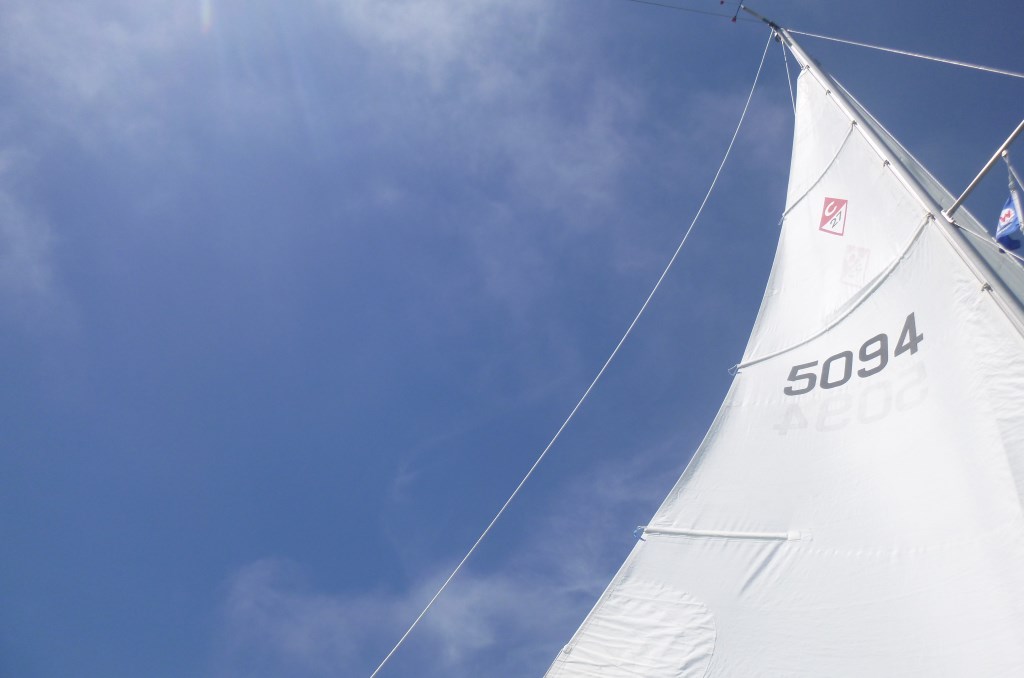 We got back early enough to drive over to Seaside and try to see what the fog looked like there. It appeared to be more of a haze when you were in it, but I imagine that it could have been worse further out or earlier in the day. 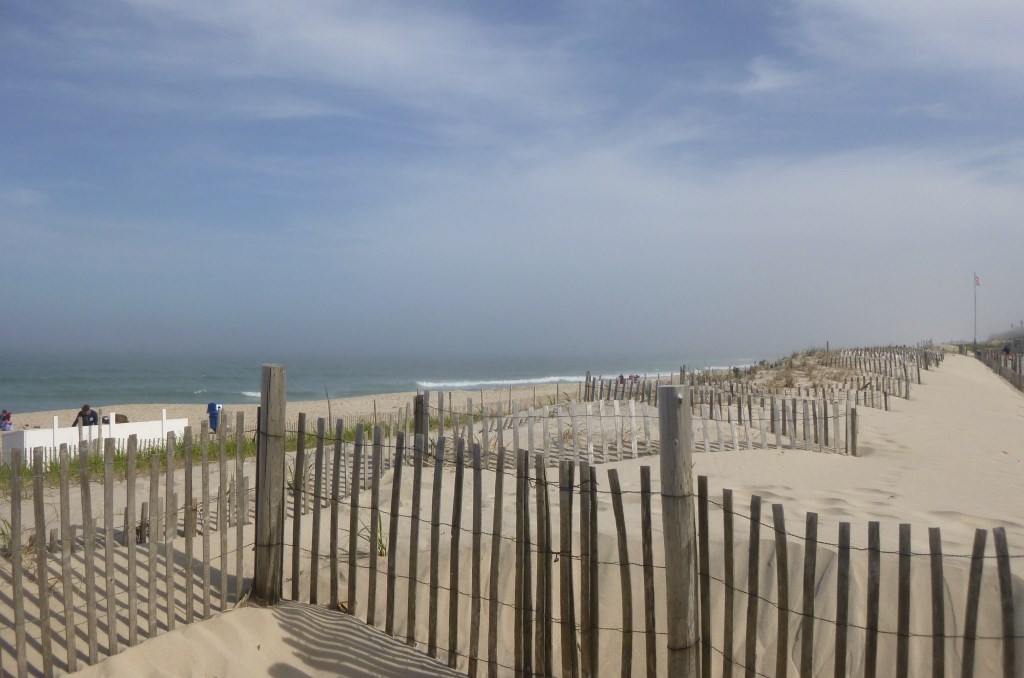 So, although we didn’t make it to Beach Haven or even get to spend a night on the boat, we did get some good sailing in and some high-quality relaxation time. I have yet to hear any trip reports from fellow Windjammers, but I can’t imagine that we missed that much, motoring into 20-25kts or sailing back in a soaking rain. The sailing is always more important to me than the day of shore leave in Beach Haven. Sailing seems to constantly enforce doing the best you can with what you’re given, and sometimes that includes staying in port, or at least turning your three-day sailing adventure into 1.2 day trips.

1. You should all immediately go watch Steve Martin’s 1979 film The Jerk, from which I gratuitously stole this.