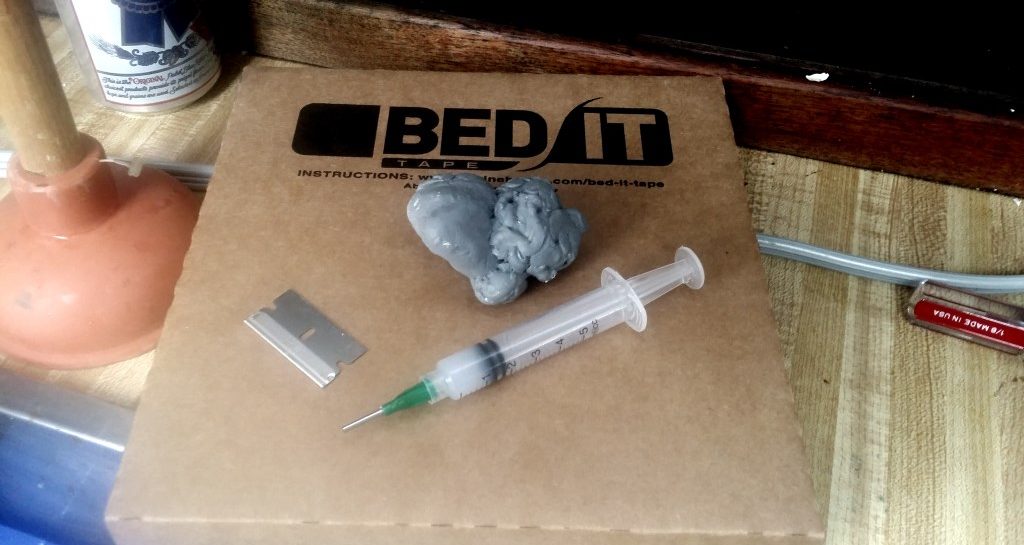 They will tell you that the eyes are the windows to the soul, but no one warns you that windows on boats are the portholes to madness.

I consider myself a reasonably intelligent person, and handy enough. I don’t know why I can’t successfully put a window in a hole. In fact, it seems like with each attempt the situation gets slightly worse.

Last week (attempt #3), we tried butyl tape to re-seat the two still-leaking windows. One of them is ok…not perfect, but I think that with some torquing down on the screws, it should come together. The other one seems to collect water from the entire surface area of the boat and shoot it into our galley with preternatural force. We are now entering Phase 4. Rocky vs. Drago. Indiana Jones vs. Shia LaBeouf. 4 Fast 4 Furious.

The one on the left is the offending window, here with the interior ring removed: 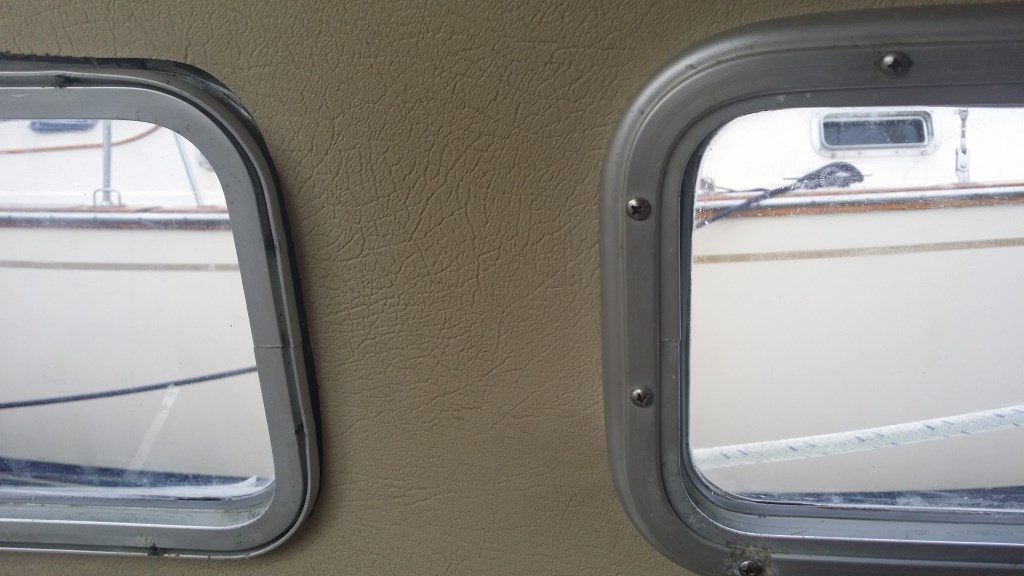 When you zoom in a bit: 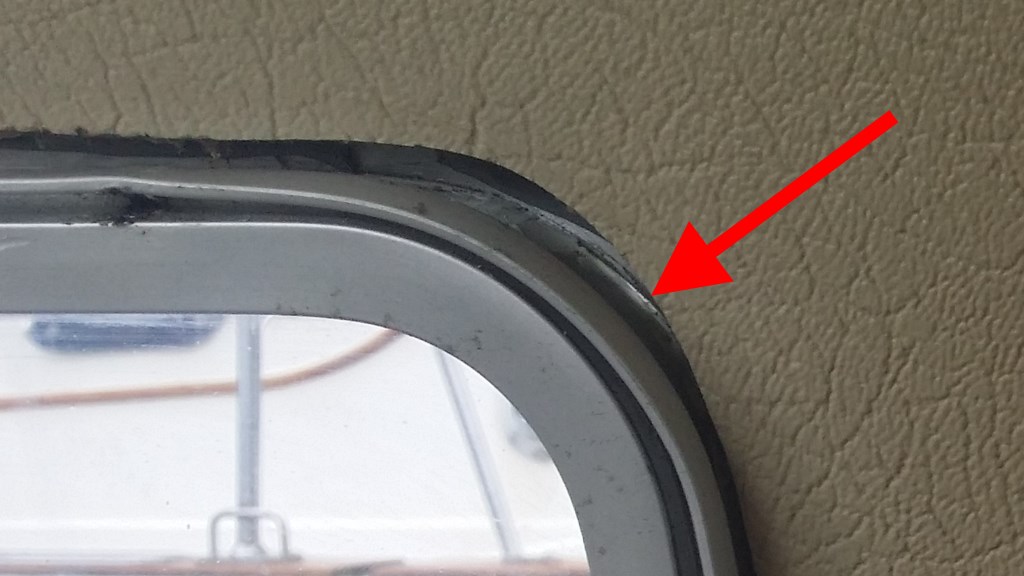 But, soft! what light through yonder window breaks?
It is the east, and there should be no sun.
Be gone, fair sun, and be killed by envious butyl,
For I am already sick and pale with grief.

The upside of having used only butyl last week was that it was relatively easy to get the window out. If we have to do this a 5th or 582nd time, the butyl will be less taxing on our poor gelcoat. We had previously used 3M’s line of ridiculous adhesives—specifically, the least-tenacious 4000 variant. 4200, while not technically labeled as permanent, will still glue a hardhat to an I-beam more-or-less indefinitely, while the high-end 5200 causes preachers to rethink the scale of “eternal damnation.” Even 4000, however, has a bond strength that far exceeds the bond between the gelcoat and the fiberglass. The only solvent I’ve ever heard of that will touch it is this stuff called DeBond. It works, but it also melts most other things. My fear was that during multiple aggressive DeBond sessions, in addition to removing all of the writing from my screwdrivers, it also damaged the other seal on the window. There are two: the flange of the frame is supposed to be sealed to the boat, and the glass is also supposed to be sealed into the frame with some vinyl glazing and silicone. We decided to take that apart and reseal it too, just in case.

We meticulously cleaned everything. We put silicone on both sides of the glazing this time (oops?). My caulking gun instantaneously fell apart, but we borrowed one from Stormy Petrel and kept going. We used twice the butyl—a flat layer all the way around the outer edge of the flange and then a sneaky snake just inside that to make a thicker gasket and maybe account for whatever deviations we’ve bent into the frame from our extended wrestling sessions. We were running low on butyl after last week’s failure, so I had to order more. The new stuff (still directly from MaineSail) seemed to stick slightly better, or maybe it was just more fresh, if that’s even a thing. When we got the window seated, I could still see an area that wasn’t sealed where the halves of the frame joined up—the screws that hold the frame together don’t tend to pull the seam closed; they go in side-by-side to a small piece of aluminum with tapped holes that acts as one big nut—so I fired more silicone into that gap with a hypodermic needle.

I have no idea. I don’t know how we could have done it any better.

We didn’t want to test it since the silicone was still curing, so we’ll have to wait and see.

I don’t know what Phase 5 looks like yet, and frankly, I don’t want to know. I did break down and buy some Commodore McGillicuddy’s Magical Mystery Leak-Seeking Sauce that is supposed to “find” and fill small gaps, but I have very little faith in it. I might have to glass in the whole cabin and install bronze portholes.

In this case, the anxiety is more than just the usual desire to actually sail the boat…we’re supposed to be going on a trip soon, and we’re pretty much out of time. For example, while re-doing this window for the fourth time, we also:

Hopefully we’re close enough. It would be nice to sail soon.

4 thoughts on “Portlights, Part the Fourth”