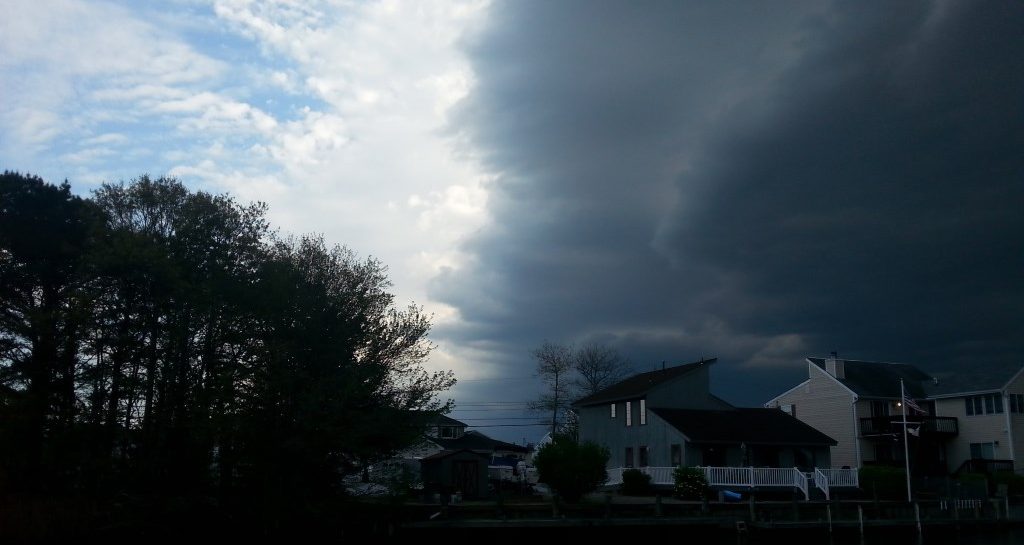 With the cool and rainy weather, things have been a little slow to come together as we prepare Fortuitous for the season, but we’re working on it.

While moving about on the boat this season, we noticed that the door to our anchor locker had become precariously soft. I decided to take it home and try to figure out what had gone wrong. 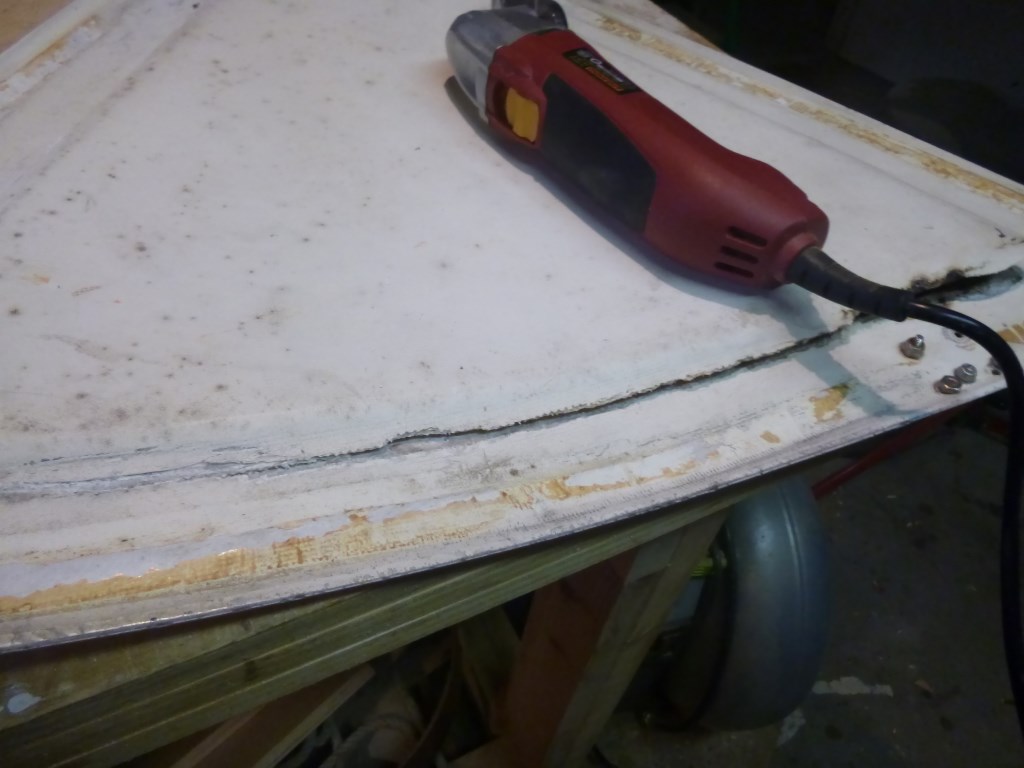 The most obvious thing is that the lid is gross.

Upon further inspection, I figured out that the lid had a bent plywood core, encased in fiberglass, with a textured gelcoat layer on top. The wood had become delaminated and the fiberglass that was supposed to be encasing it and had torn away on two sides, allowing it to get wet and rotten.

I have only the vaguest idea of how this stuff is supposed to work, but I decided to remove the wood entirely, reseal the underside of the top with epoxy, and build up the thickness with solid glass…mostly because replicating that smooth curve in new plywood seemed unlikely.

To get the rest of the wood out, I cut around the areas of encasing fiberglass that were still intact with an oscillating saw, and then very slowly pried the wood away from the top with judicious use of wedges, a crowbar, and a dead-blow mallet. 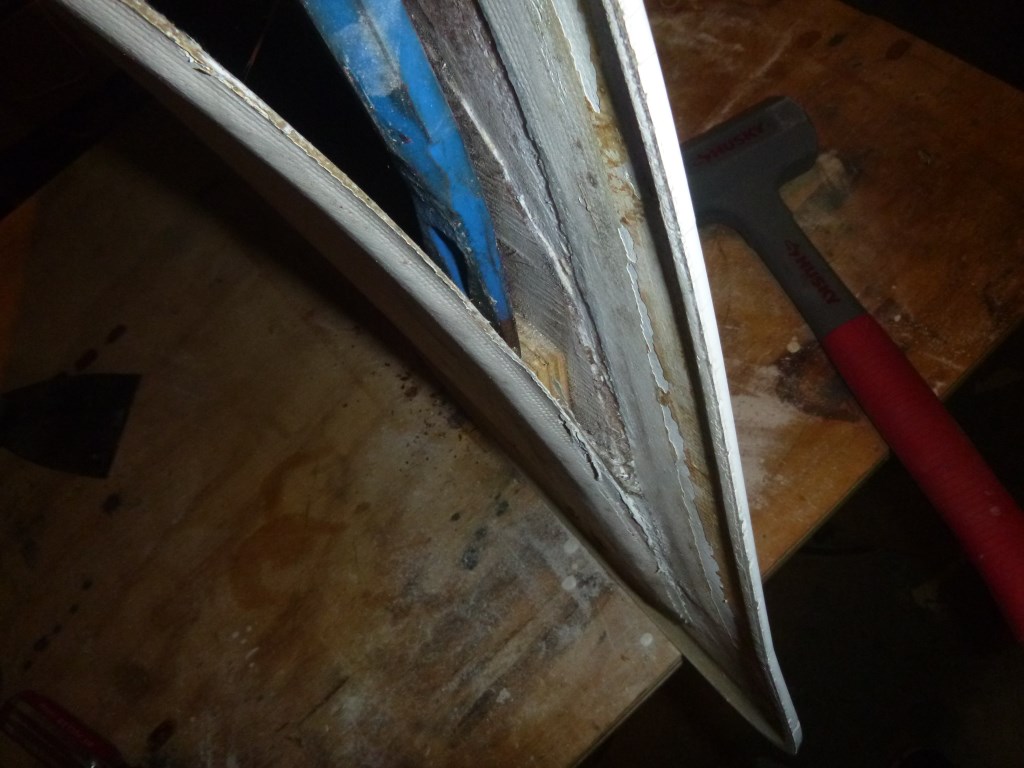 This worked surprisingly well, considering the amount of brute force that was involved. There was one ply of wood left in some areas, but it mostly came off cleanly, and 40-grit sandpaper took the rest off easily enough.

I’d been boating for a long time to have never purchased epoxy by the quart, but the time had finally come. When I unscrewed the cap of the hardener, I was greeted by a curious and seemingly self-evident command: 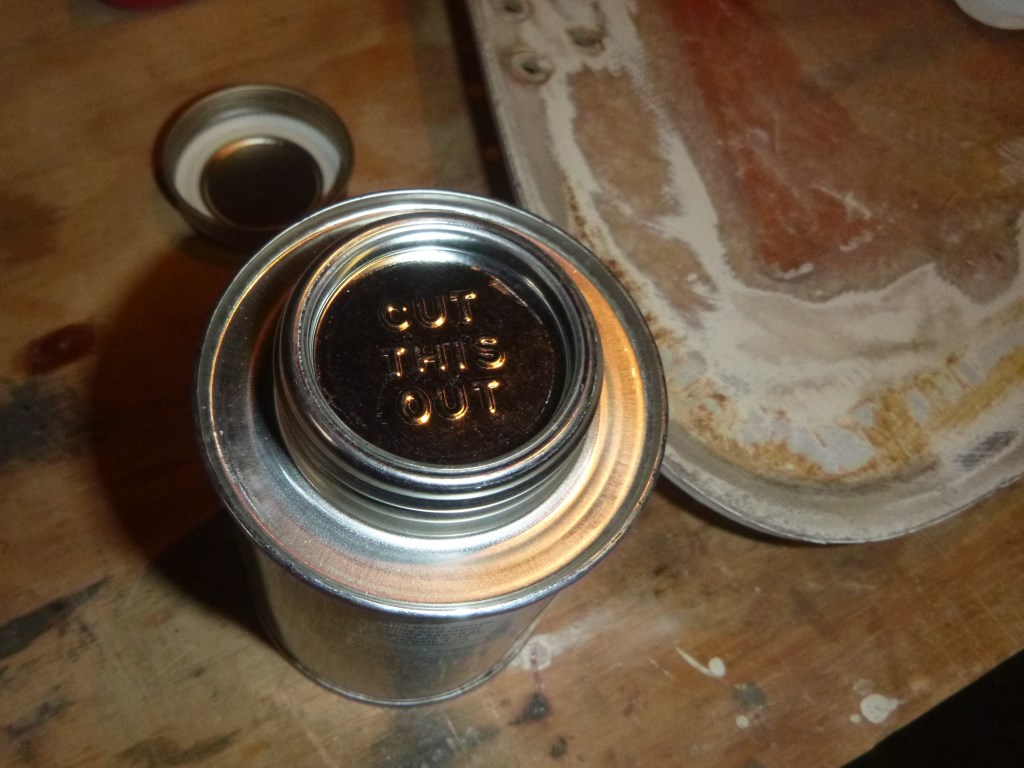 Sometimes, when the boat keeps coming up with new maintenance tasks for me, I wish I could tell her the same thing.

After some experimentation with this weird biaxial cloth that I’d purchased, I began laying up layer after layer of glass and epoxy. After several days (and way more glass than I thought I’d need), I think it came out ok. I can certainly stand on it. It did make some slight creaking noises the first time I stood on it after reinstalling it on the deck, so who knows if it’s going to hold up, but at least the curvature was maintained and the anchor is contained.

Last season, the manual, foot-operated water pump for our galley sink stopped working. I initially hoped that it was just the spring return and that I could patch it back together, but operating the lever by hand didn’t work either. Not knowing its vintage, or what had been living in it over the last several years or decades, I decided to just replace the whole thing, so a Whale Gusher Galley Pump showed up on my Christmas list.

To their credit, I don’t think Whale has changed the design of this pump in 50-ish years. It should have been the easiest drop-in replacement ever: connect input hose; connect output hose; bolt it to the bulkhead; done. But this is a boat, and nothing is ever that easy.

The first time I ever had access to a photocopier, I found a box of a thousand rubber bands, emptied them onto the glass, and made a copy of it. In the lower left hand corner of the copy, I drew a tiny industrial-looking building with the roof popped off and titled the piece Explosion at the Spaghetti Factory. Perhaps if the previous owners/designers of this boat had access to such technology as children, they could have gotten the idea out of their systems, but instead it seems to have been the entire genesis of their design aesthetic for plumbing and wiring. 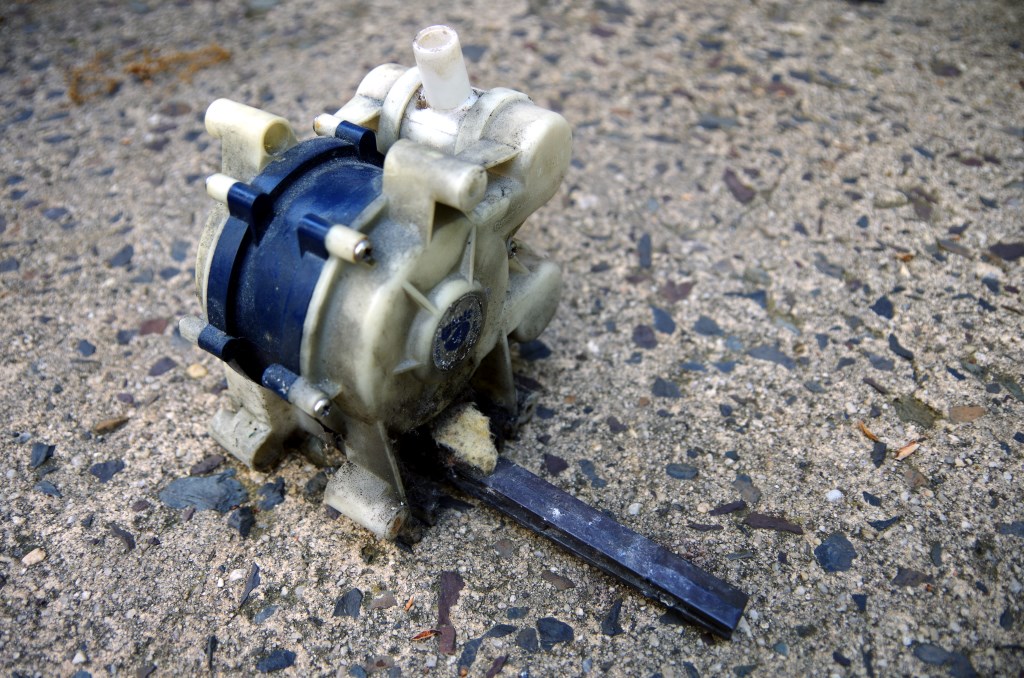 The pump isn’t really attached to the bulkhead. There’s a small fiberglass shelf with side supports behind the bulkhead, just to port of the engine, which conveniently limits most access. The hose from the water tank (which is on starboard) travels in front of the engine, around the pump, then banks into a high-g barrel roll, performing a 180° turn to go through a tiny circular hole in the wrong side of the shelf’s support. The output hose dangles from the top of the compartment. Neither hose has more than a couple of inches of play, which eliminated the option of connecting the tubing somewhere physically accessible and then mounting the entire unit. I may not be describing this well because I never actually saw it…I ascertained this all by feel, since there is no way to physically view the area in question short of inspection mirrors or an endoscope. To make matters worse, I was only able to reach the area with one hand, and given the layout of the boat and my anatomy, it had to be my less-dominant left hand.

I was eventually able get it installed, utilizing a range of both eastern and western philosophies including deep breathing exercises and white-hot rage at the absurdity of the imposed limitations.

I barely want to even write about this, but after the odyssey of completely replacing our portlights (in some cases, twice), they’re still leaking.

The new plan was to remove them—again—and this time use butyl tape as the sealant instead of 3M 4000, since we clearly don’t know how to correctly use polyurethane sealants. The key to psyching myself up for this masochism was that I had somehow convinced myself that there was only one leaking window. As usual, I had planned out the steps in my head, and assumed that we’d complete them in about the time it would take me to recite them. I even thought that we might be able to go for a quick sail afterwards, during which we could gleefully take spray over the bow, confident that it wouldn’t be funneled through the gaping holes in our cabin top and down into the rusted-out shells that used to be our cabin lights.

Jen, however, remembered that there were at least two leaking windows, which somehow seemed more than twice as bad.

The good news is that we’re getting more efficient at removing portlights. This is not a skill that I would ever wish upon anyone, but desperate times call for desperate attempts at positivity.

Jen mostly worked the outside while I worked the inside. We scored and hacked at gobs of 4000. We shot doses of hard-core marine solvents that would be lethal to mortals. We came with the right tools for the job: a putty knife thinned down to a shiv on a belt sander, a chisel that I don’t care about anymore, an electric screwdriver that was actually charged ahead of time, and His Majesty, King Screwdriver. An unrelated home-based maintenance debacle involving a broken toilet and a frantic trip to the local hardware store in wet jeans resulted in the purchase of a screwdriver so powerful that it absolutely dwarfs what was previously described as my “big honkin’ screwdriver.” It is the battleship of screwdrivers. Its extreme leverage and torque are to be respected and feared. It can pop out a window like cracking open a can of PBR. Which I also did.

The most laborious portion of the process was cleaning the frames of old sealant—again. Jen did the coarse work while I went after it with a single edge razor blade and synthetic steel wool. The clock was ticking, because as I started rolling up sneaky snakes of butyl, Jen was watching the line of thunderstorms approaching on the radar. 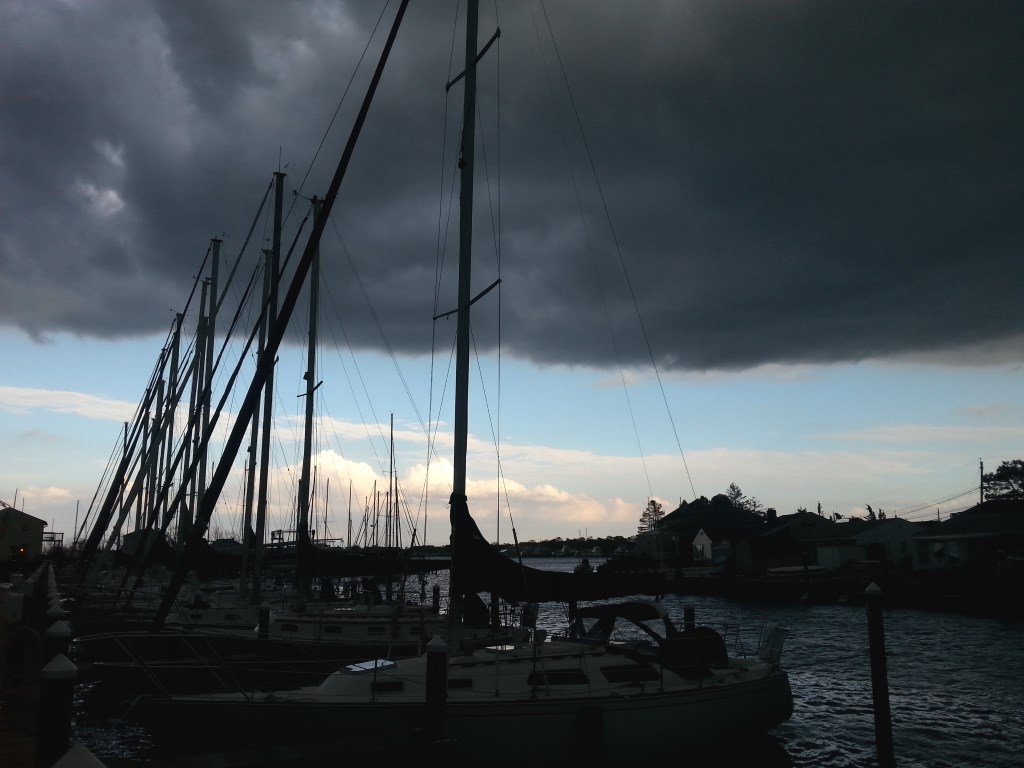 We worked together. We test fitted (somewhat). We practiced the handoff. We developed the vocabulary required to differentiate vague ideas like “down,” “in,” and “back” when observing something from two sides and trying to delicately maneuver it in concert. We timed it so closely that when we were ready to test them, Jen thought that I was getting the hose while I was simply watching the marina being consumed by clouds.