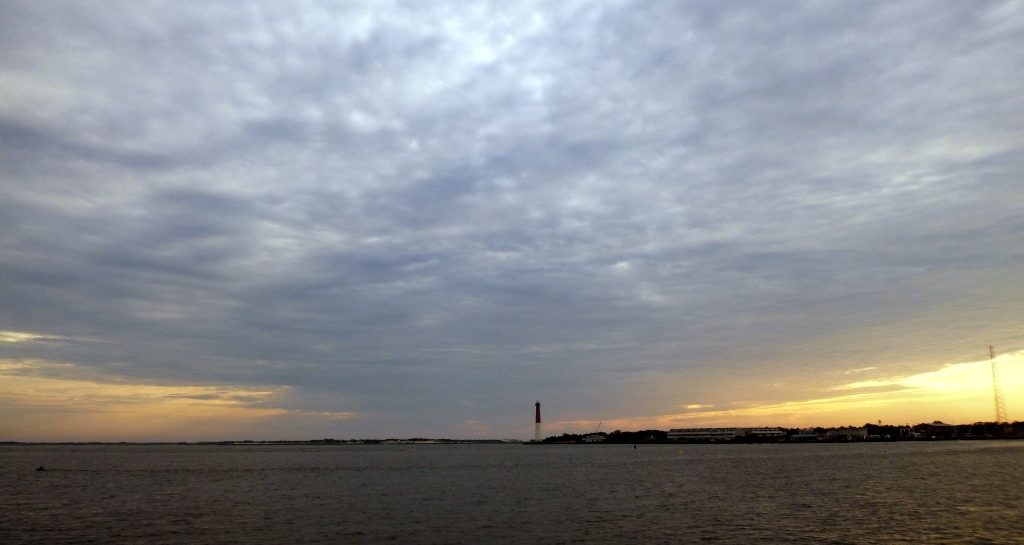 Myers Hole was the place to be this weekend.

Sailing activities for me started on Providence II, the Sabre 36 that I crew on at the shore. She mostly races with the more competitive Tall Oaks Yacht Club these days, and Saturday was their annual pursuit race. The course was unusual (I still couldn’t tell you what shape it was), with markers all over the place, non-obvious roundings, and a bizarre downwind start. After some initial confusion as to which government markers we’d be using, the race got underway around noon. We were the scratch boat and our starting time was more than 12 minutes after the slowest rated boat’s, although the first few boats didn’t exactly nail the start to take advantage of their extra time. We passed a few boats on the first leg, but the reaching leg is where it all fell apart for the rest of the fleet. I can only figure that whatever boat was leading the pack didn’t have the coordinates of the second marker logged, and everyone else followed them way to the north searching for it. We had it programmed on the chart plotter and sailed straight to it. Providence was the first boat to the second mark, and no one came close to passing us after that. We actually placed that marker [exactly at the published coordinates], so I was kind of curious as to how much ribbing our skipper received at the after party, but Jen and I weren’t able to attend due to a prior engagement of more sailing.

Jen drove separately to the shore, bringing all of the things that I neglected to pack for an overnight stay. Sadly, I was even forced to send her a text asking “Did you bring my ladies’ swimming pants?” At some point, I somehow managed to lose my swim trunks, and have been packing a pair of women’s shorts that Jen borrowed (and then stole, apparently) from a then-pregnant friend of hers. Lord, do they fit weird, but they’re the closest thing I have at the moment to fast-drying short pants suitable for use as bathing trousers.

After loading in our supplies, we were further delayed by trying to figure out how to perform our very first pump out. This inglorious activity was thankfully straightforward, consisting only of docking over by the travelift, firing up an industrial-scale Mr. Thirsty, and plugging it into the deck fitting marked “waste.” The marina owner said that it used to have a glass section so that you could visually see when its task was complete, but that someone had broken it. Frankly, I’m ok with that. He did explain how to interpret its behavior, including a pantomime and sound effect demonstration of it bucking and gargling. I’m not sure that my skill with this device is such that I could tell with any precision what it was implying, so we just gave it what seemed like ample time and tried not to move on with our lives as if it hadn’t happened.

Our trip could then begin in earnest. With a southerly wind, we motorsailed south to BI to make up time and then wound through the Oyster Creek Channel toward the inlet. We were headed to Myers Hole to meet up with Sailor Dave and his wife Donna, who were en route from the Chesapeake to Long Island Sound. 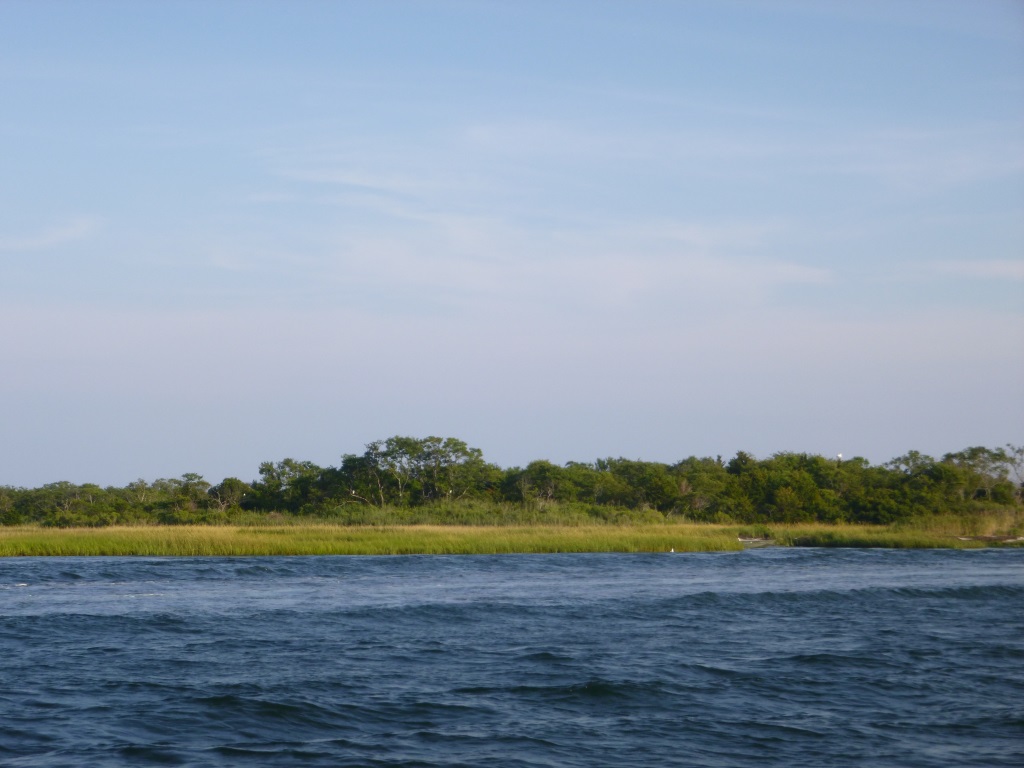 We had the current with us and were pushing 8kts speed-over-ground as we passed through the sedge. We had previously tried to go to Myers Hole on Fourth of July weekend, but gave up after bumping the ground a little in unusually low water following Hurricane Arthur (among other problems). This time there was no drama, other than the usual struggle to find the dilapidated buoys, camouflaged with rust and marine growth and listing severely in the current.

We arrived at the anchorage and found Haleakula among the many anchored boats. We hailed Sailor Dave and discussed rafting up, but I had approached on the wrong side so we took a big loop around. Of course, as we went around the anchorage on the shoal side, we ran aground. I instantly thought of how pathetic it would be to not hang out with them while we waited for a tow 50 yards away, but fortunately we were going slowly enough that we didn’t run into it too hard, and I was able to turn us quickly to bounce out into deeper water. We then realigned and I crept toward them. I’ve not yet mastered close-quarter maneuvering with an inboard keelboat, and I exhaust a lot of my sailing brain power actively trying not to run into other boats, so it was a little unnerving to be so close, but Dave talked me through it and we successfully rafted up.

Long-time readers of Sailing Fortuitous may recall that the first time we met Dave was back in 2009 when we were shopping for Fortuitous I. He had signed up on a large sailing forum to help look at boats for people either too far away to warrant a trip on a “maybe” boat or too green to know their aft from a hole in the water. We were in the second category, and he helped us evaluate the boat that would teach us pretty much everything that we know about sailing. We’ve never forgotten his kindness, and have kept in touch ever since, so it was great to get to meet up with him and his wife on our home waters as he passed through and show off our new boat.

Our late arrival meant that we couldn’t stay too long. We didn’t want to anchor in complete darkness, so after some drinks and conversation aboard both vessels, we wished them well and putted off to anchor beneath a stunning sunset. 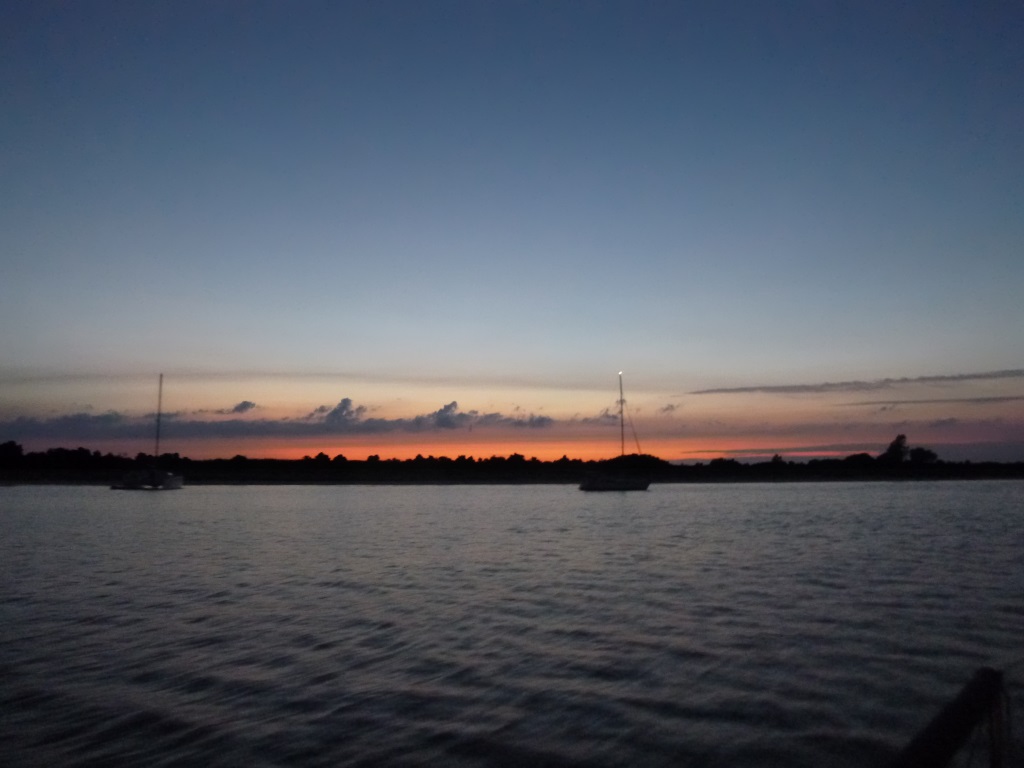 Speaking of sunsets, as we were preparing our late dinner, Dale stopped by in his dinghy. I thought that I’d seen his Pearson 33, Sunset, as we motored in, and it turned out that both they and fellow Windjammers Callisto were there. Sunset was just returning from Long Island Sound, and we talked about their trip and our boat’s weird running light arrangement. It’s kind of crazy to me that there was such a confluence of our sailing past and present in the anchorage. All we needed was The Boat of Christmas Future to show up and tell us all about our retirement yacht to complete the Dickensian trifecta.

As always, we didn’t sleep that well, even though our anchor (with precautionary kellet) held well overnight and we weren’t unduly burdened with boat wakes despite our choice to anchor on the periphery. I can tell you that the sky was amazing between 0500 and 0700.

Given the state of the tide, it didn’t make sense for us to leave much before noon, so we dawdled and napped away much of the morning. 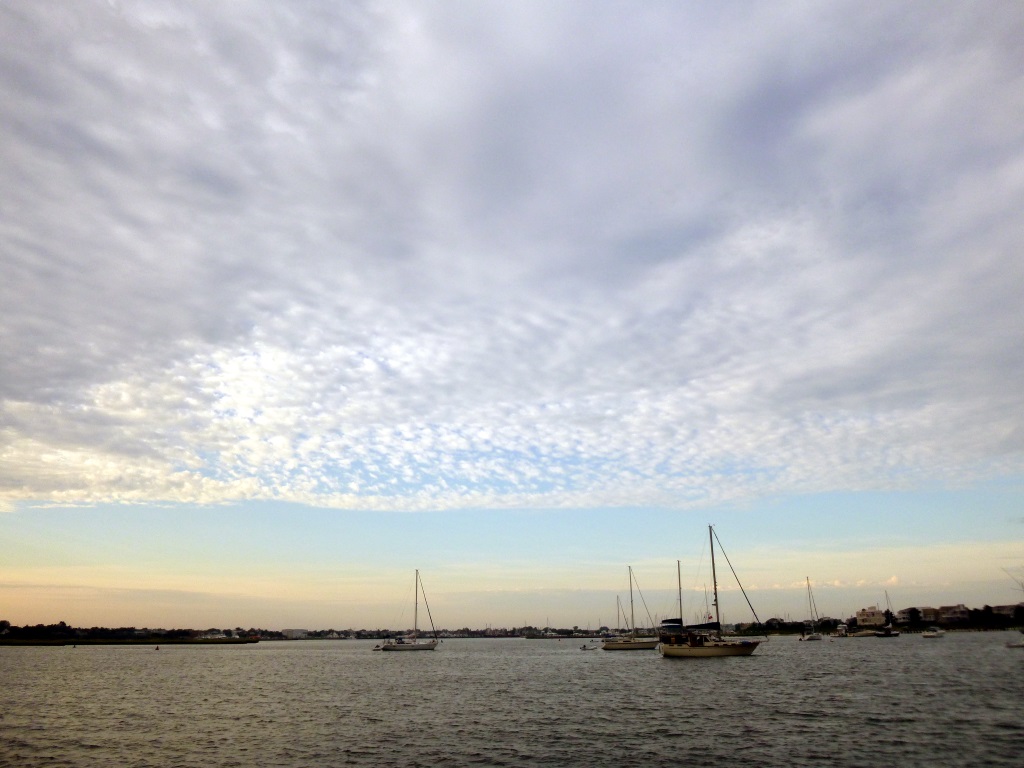 Jen made us a breakfast of pan-seared “scrambled eggs” steeped in black pepper and tater tots, packed in oil, that sort of devolved into a grease hash under her firm spatula hand. We’re obviously still figuring out how to pack and cook food on a boat, but any hot meal is welcomed on the water.

I swam in my ladies’ swimming pants. We watched weirdos in tiny, tiny boats get abused by boat wakes while trying to fish in the approach to a busy inlet. The second guy had the right idea wearing that blaze orange hunting hat, because that was sometimes all that was visible when he was between crests.

A Catalina 22 anchored nearby and I was reminded again of how well our boat behaves. While every other boat in the anchorage was pointed at the beach, the C22 bobbed 180° out of phase. We’ve been there, man! 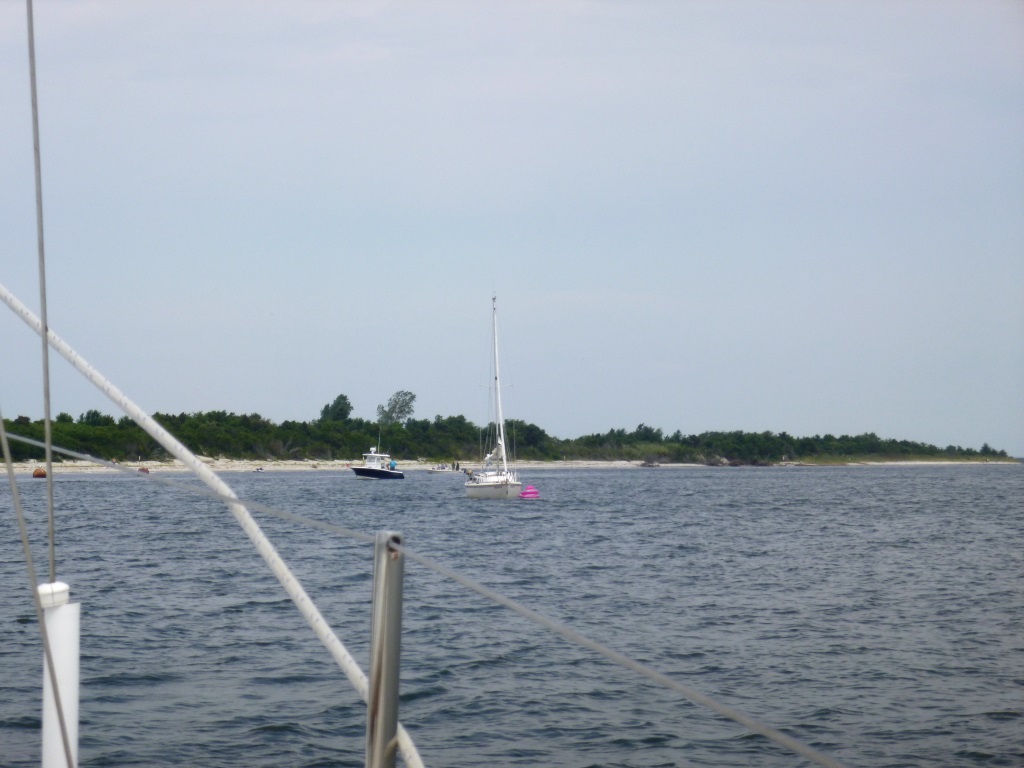 It started drizzling as we were weighing anchor, but the shower passed soon after we entered the channel for the return trip. There was a west wind blowing around 15, and we were happy to turn off the motor as soon as we could and sail back up the bay. We initially left the jib slightly reefed, but when we had trouble passing a Catalina 34 we let it all out and eased past them without any unnecessary heeling or squirreliness. To sail our 22 as aggressively as we did, we had to learn how to be conservative with the sail selection, and while that’s not a bad skill to have, it’s taken a little time for us to really unwind the 27. She handed it beautifully though.

We’ve always loved Myers Hole—the lighthouse, the exotic nature of feeling somewhere somehow different, the ocean lurking just over there—but it’s even better when friends show up. Fair winds to Sailors Dave and Donna as they continue their trip.

More photos are in the gallery here: /gallery-myers-hole-rendezvous