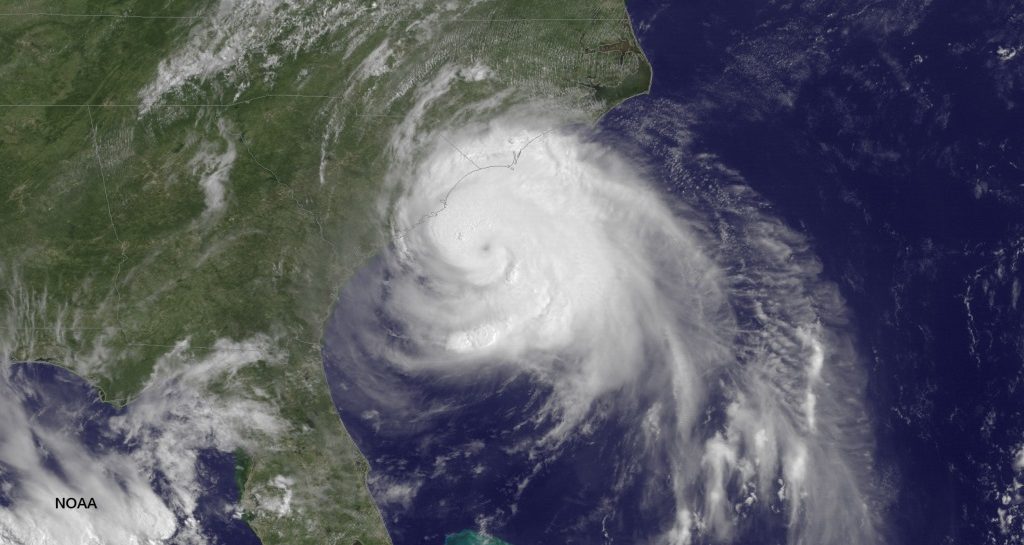 I’d like to blame it completely on Hurricane Arthur, but our Fourth of July weekend plans got messed up for a variety of reasons.

It seems a little too early in the season for a hurricane to be making it this far north, but here we are. The predictions for our area weren’t for more than blustery rain, but this was our first hurricane with a boat in a slip, and I’m not really confident that we’re tying her up correctly for a sun shower, much less a named storm. We decided to push back our plans and try for Myers Hole on Saturday, and that I would go down to the boat solo on Friday just to be there to deploy fenders and additional dock lines if necessary.

Fortunately, it was a non-event. Arthur briefly bumped up to a Category 2 as she sped past the Outer Banks, but was back down to a Cat 1 and well offshore by the time she got to New Jersey. We got hit by some bands of rain and a handful of wind gusts to near 30kts, but nothing worse than what we see in a typical thunderstorm. I’m glad that I was there though, just in case. 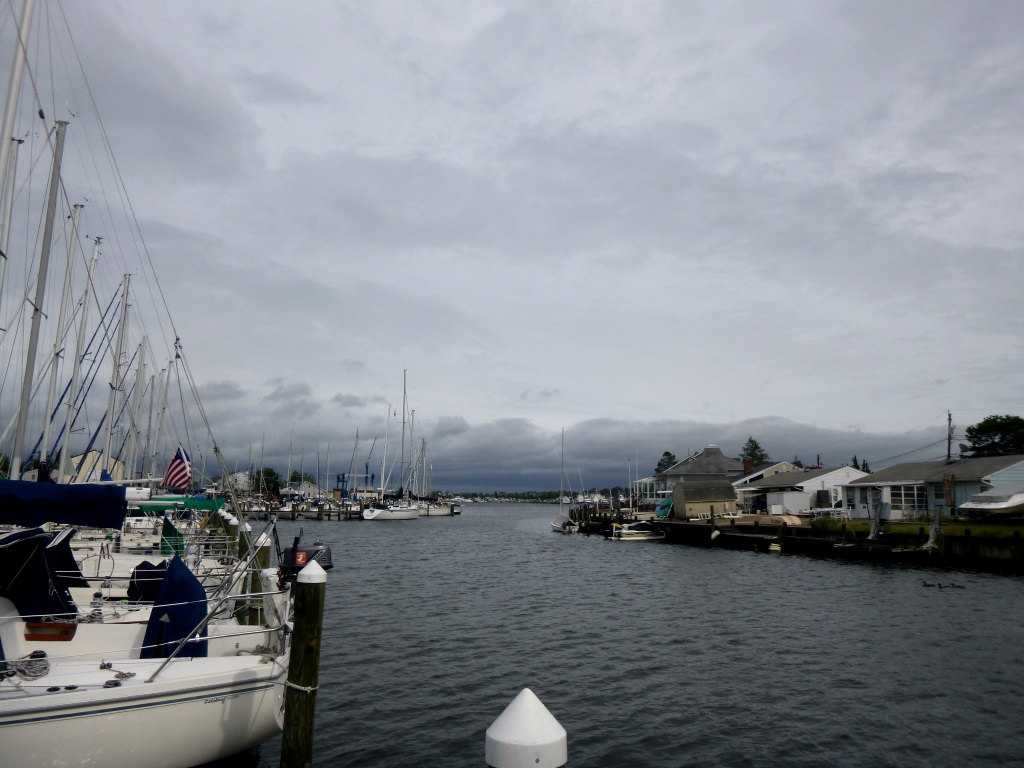 While I was on the boat, I figured out how to get our shore power working, and removed approximately 2,000 feet of electrical tape from our cabin fan, so now its direction of blow can be adjusted. I assumed that it was taped because it was broken, but it’s not…I guess it was just a failed attempt to keep it from vibrating annoyingly. A bungee cord to the top of the hanging locker still seems to do a better job at that. I hung out with some dock folk and we watched some fairly elaborate amateur fireworks demonstrations.

Jen came down to meet me on Saturday and we loaded in more gear. It had gone down to 58° the night before and I told Jen that I had been a little cold, so she came with lots of blankets and things, and possibly provisions for the full three-day trip (at least for the stuff that couldn’t easily be parceled out). We also set up our new new anchor, now appropriately sized for the boat.

I don’t know if there had been an extended period of westerly winds or if the hurricane was just doing something weird off the coast, but the water in the bay was very low. I’d been over to Trixie’s to check on the 22, and was thinking that we’d never be able to launch with the water that low, even if we could have squeezed in between the endless parade of Fuzzy Bunnies launching their glittery noisemakers. As it was at Cedar Creek, we were stepping down from the finger pier onto our cabin top.

It turns out that when the water is that low, we can barely get out of the creek. We were rubbing even when directly between the channel markers, although we never actually got stuck. We just bumped a couple times and kept on going. As we got into deeper water, we put out the jib without even prepping the main. The wind was from the northwest, gusting to 20kts, so I thought we’d be fine on just the jib to get down toward Myers Hole. I didn’t want to get to the Oyster Creek Channel too early, since the tide was coming in and the current in the channel was still building.

The bay was completely packed with boats. I guess the lousy weather on the 4th concentrated all of the boating activities into the remaining weekend. The scene at Tices was crazy…that white line between the water and the beach is all boats: 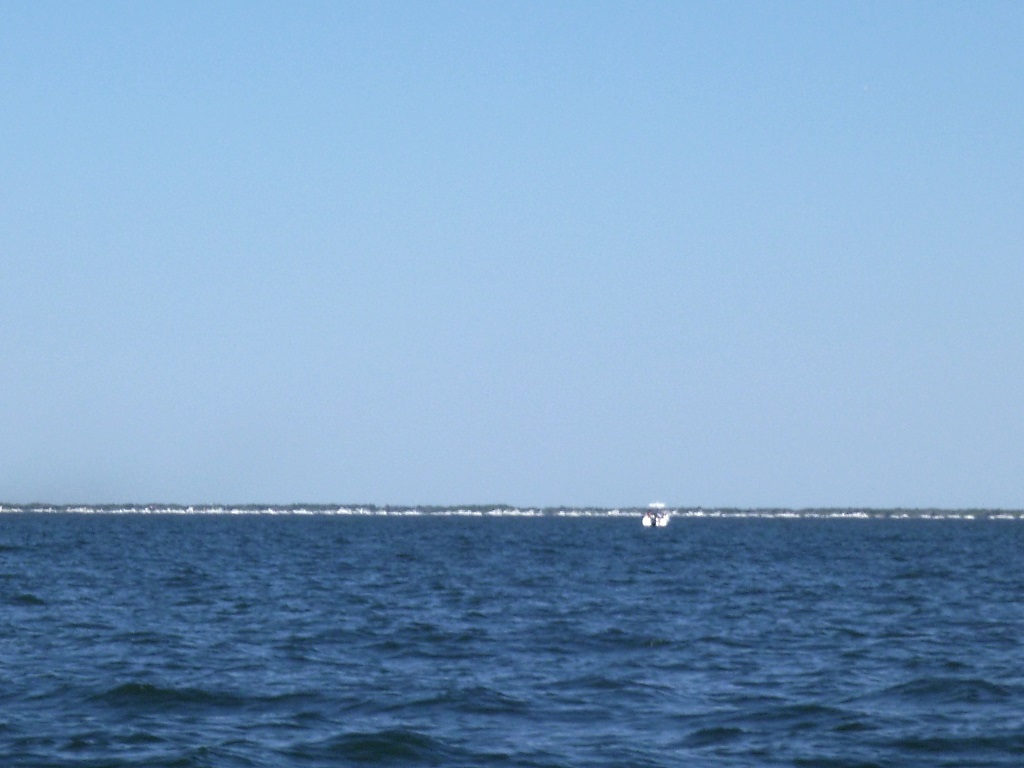 We continued south, dodging traffic and trying to pretend to relax. Since Jen hadn’t been there in the morning, I was trying to tick off maintenance items and completely forgot to eat anything, and was even more cranky than usual as everyone tried to drunkenly run into us. Yeah freedom! A possible highlight of the trip was one particularly ungainly cube-shaped motor yacht, flying a flag with the same symbol as Fuzzy Bunny’s wife beater: an angry looking eagle with superimposed jingoism. I wish we could have taken a photo, but it was trying to swamp us with its 6ft wake, and we had to take evasive action.

Our efforts to take our time were apparently not enough, and we got to BI about 45 minutes after max flood. I really didn’t want to try to get to the lighthouse against a 2kt current, so we sailed past and continued south to kill time. I thought that this would at least give us an opportunity to come about and put up the main—I figured we’d motorsail through the channel, which gives us a lot of maneuverability and stability, but I prefer doing that with the main since it’s easier to handle. The squirrely wind shifted soon after though and we were almost close hauled on the same heading, so we took the opportunity to bring in the jib, fire up the engine, come head-to-wind, and set the main. We hadn’t really gone that far, but we swung around and approached BI from the south.

Val had warned me that there was shoaling near the entrance of the channel, and we’d actually seen a sailboat aground there when we passed the first time, so we tried to meticulously follow the channel. This was made more difficult by the extreme traffic. Every party barge and garbage scow was also trying to get through the channel, pulling their hair out and eating it in an apoplectic fit at the idea of having to go around us. The first mark is, of course, a red with no green, so I was trying to leave room for Johnny Asshole to pass port-to-port inside the buoy when we started to bounce our keel along the bottom. I quickly looked behind us to see if we had room to turn toward the mark, but we were being overtaken on both sides simultaneously by what appeared to be a hot-rodded pontoon boat on plane and a Boston Whaler with approximately 70 children in and around it. There were more boats behind them, and we had a wait for the sportfisher and the ski boat and grandpa’s old lapstrake whatever to pass before we could turn around and give up on the idea of getting out there.

I felt really bad for quitting, but I wasn’t having any fun, and the thought of what the anchorage would look like made us wonder if it was worth going all the way out there with little chance of a Plan B once we got there. As we started to contemplate alternate places to spend the night, I noticed that the tiller looked like it was sitting a little low, and seemed to have a little more play than—JEN, THE TILLER’S FALLING APART! 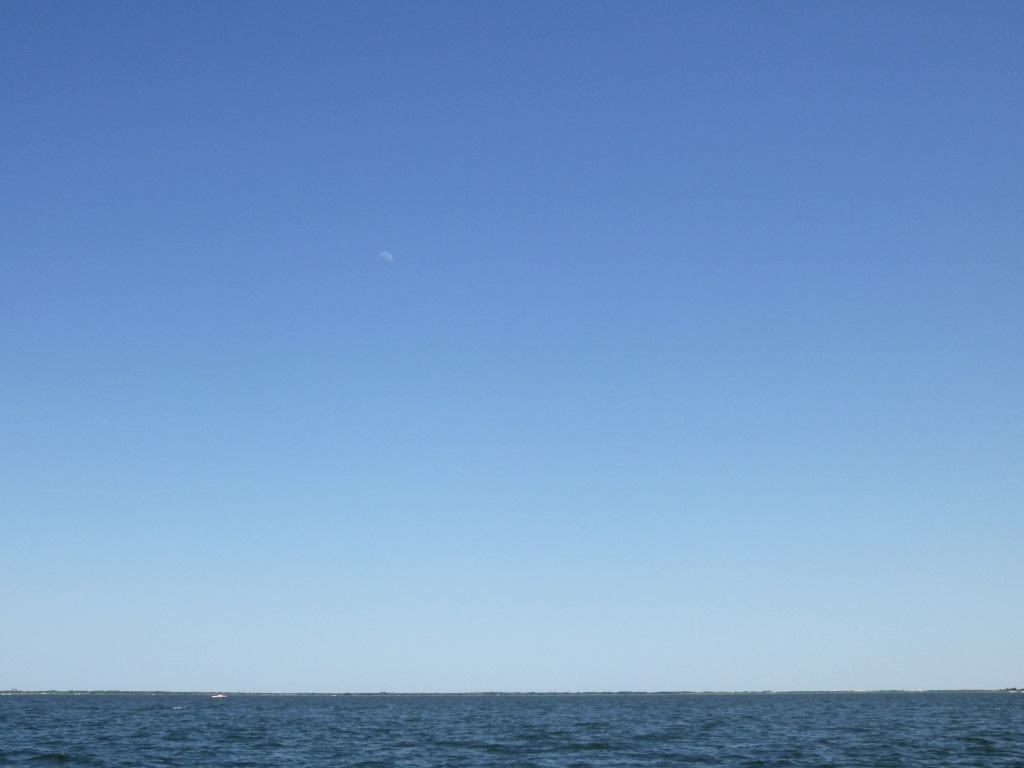 Here is a soothing picture of the cloudless sky and day moon.

Our tiller decided to de-laminate around the bolts that hold it to the headstock. Jen quickly grabbed the duct tape and we did our best to tape it together enough to get us home. Fortunately, it mostly weakened in the up/down direction and not the left/right direction, with left/right being the more important of the two, but this little failure marked the end of our planned weekend of sailing. I happen to already be in day five of a varnishing a replacement tiller, so this shouldn’t impact our sailing season overall, but I wasn’t expecting this one to go catastrophically.

We were pretty beat down, and were not excited to be unloading the boat back at the dock. On the last trip, Jen was laden with bags, while I stood sulking in the cockpit, trying to think of the things we forgot to do to put the boat away. She stumbled and tried to steady herself with the boom, which would have worked on the 22 with a proper topping lift and tightened sheet, but with our boomkicker it just gave and clocked me in the head. She was falling on it midboom, and I was at the end, so she had some decent leverage, and I went down.

I was fine; I just had a headache for a while. But between the hurricane and the busy water and our other mishaps, getting bonked on the head with the boom (with the sail down) was a fitting coup de grâce for a crappy weekend. We have resolved to do something off the water for next year’s Fourth of July, and we’ll plan a do-over weekend for sometime when it’s not a national holiday.

2 thoughts on “Caught Between the Moon and New York City”