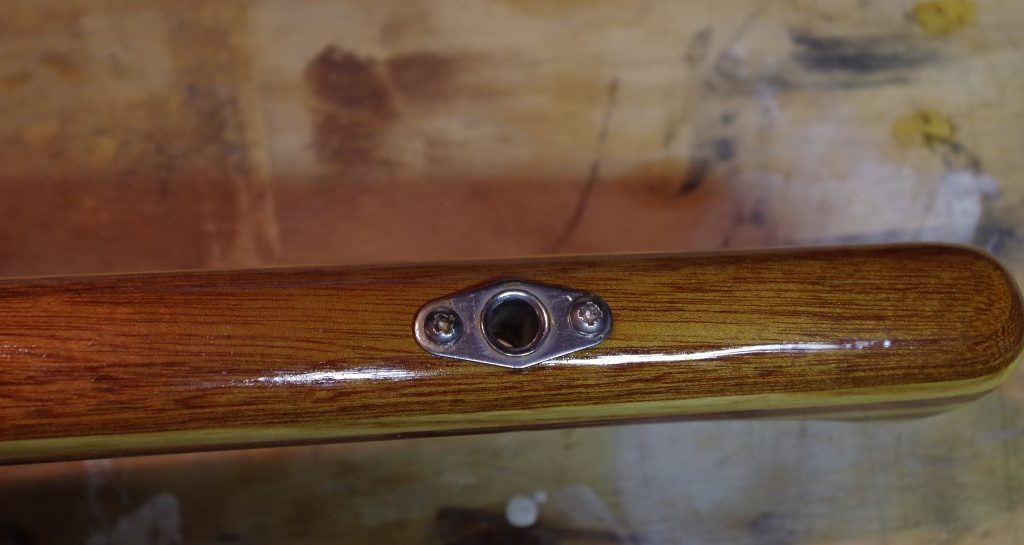 We’ve been doing a bunch of boat maintenance (some required and some elective), but I got the varnish monkey off my back in time for us to work in a little sailing.

As mentioned in the previous log entry, our tiller broke on our less-than-successful Fourth of July cruise. I had already purchased a new tiller, mostly to get rid of the tillerpilot protuberance on the old tiller, so at least we weren’t starting from scratch. The finishing process did take longer than expected though. 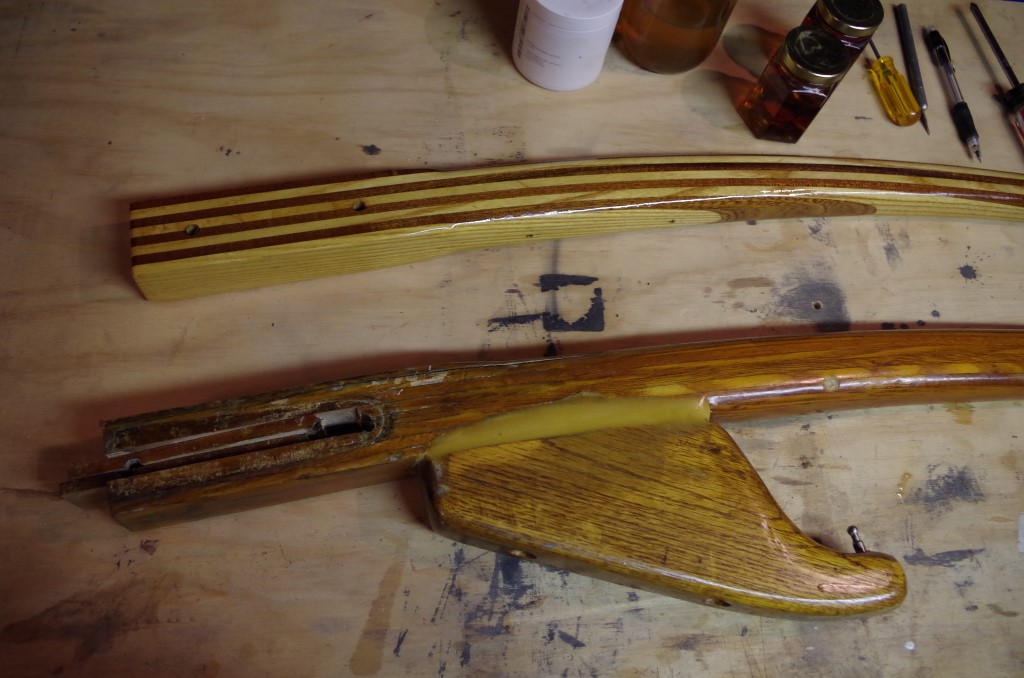 While I’ve done quite a bit of wood finishing, most of my serious study has been in the realm of guitars and other musical instruments. Luthiery has a rich tradition (and mythology) surrounding finishes, but none of it is focused on protecting a guitar left out in the sun and rain and salt spray for a year or more at a time. When I finished the tiller for the 22, I used Cetol, which is a modern varnish alternative. It did a great job of protecting it, but I never loved the look. It’s not completely transparent and obscures the wood grain somewhat, and even though I was using the “Marine Light” variant, which is supposed to be less orange than the original, it still came out somewhere in the “John Boehner” portion of the spectrum.

This time I’m using traditional varnish. It’s much clearer and doesn’t obscure the grain—in fact, it brings out the chatoyance like an oil finish. After approximately 3,700 coats, I think I’ve got something that I can be happy with. 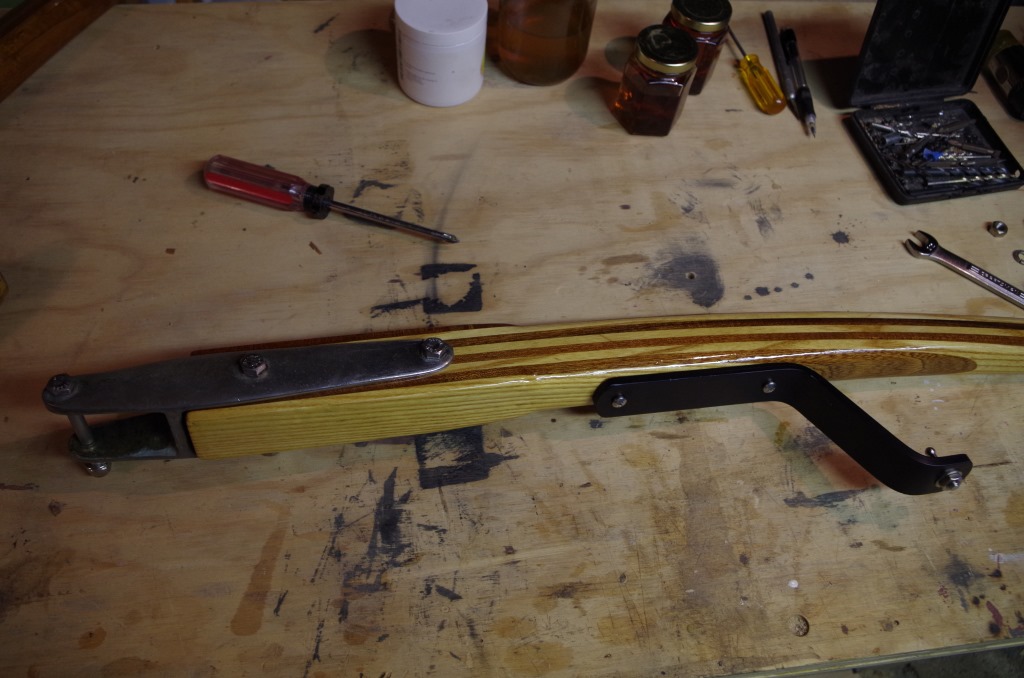 Since I was already in the zone, I decided to varnish our flag pole too. We’ve traditionally flown the ensign from the backstay, but the 27 has a fitting for a flag staff at the stern, so I bought a teak pole. 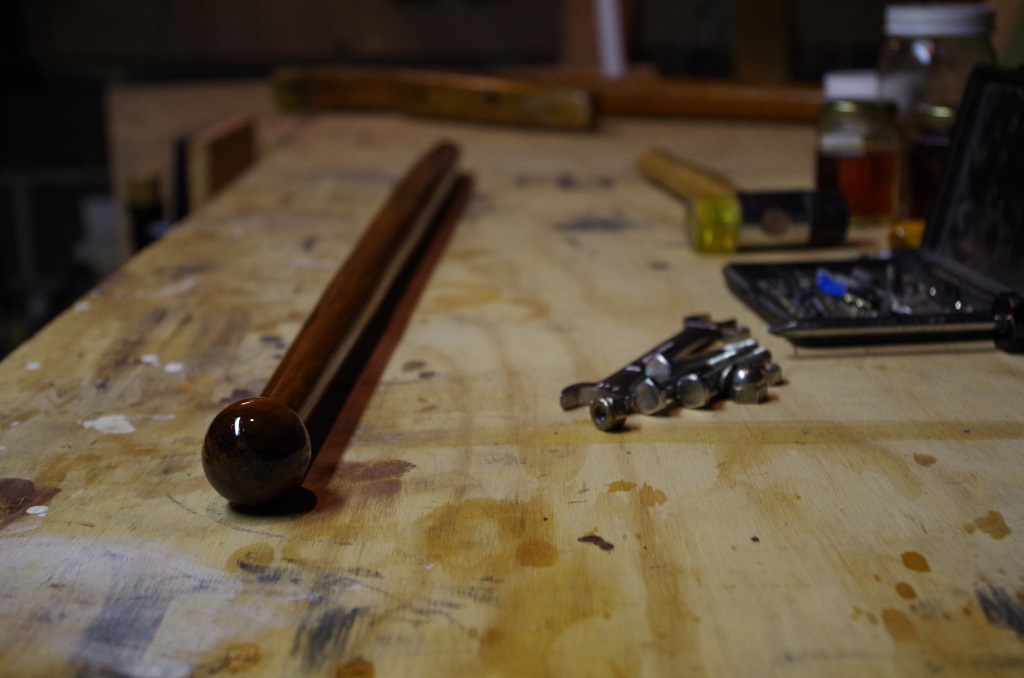 On Sunday, we went down to the boat and completed a couple more lingering maintenance tasks. When I attempted to apply the registration numbers to the port bow the first time, I dropped them in the water and ruined them. Since then, we’ve just been abruptly turning to leave law enforcement vessels to starboard. Fortunately, Boat US has an “Oops Guarantee” on their lettering. I had submitted an Oops Claim when this first happened and hadn’t heard from them, so I thought maybe my claim got denied, understandably, on the grounds of gross user error. They were able to look up my request using my confirmation number, and found that the only text that I had submitted was “Hi.” I think I outsmarted myself on their web form by using CTRL-enter to force line breaks in the text, and everything after my greeting got stripped out. They were extremely helpful though, as always, and once I was able to explain the full details of my request, they sent new ones out right away. The replacement set went on without incident.

Our last maintenance item of the weekend was to replace our jib sheet cleats. Our 27 came with normal boring horn cleats behind the [non-self-tailing] winches. This seemed absurd to me and Jen. It takes a relatively long time to tie and untie a cleat hitch, which makes small sail adjustments annoying, and in any kind of wind, it’s difficult to maintain the full tension of your winching efforts while securing the sheet. I have been told that this is an overly racerish mentality, but I don’t know…I feel even cruisers need to quickly dump a sail sometimes, and the last thing you’d want to do is be down there on the leeward side of the boat trying to undo a Flemish coil and 12 half-hitches on a belaying pin, or whatever it is that cruisers do.

I pushed for cam cleats, but Jen made a strong nautical case for self-jamming cleats like we had on the 22, noting that they could serve double duty as additional midship cleats in unusual docking circumstances. We cashed in on all of that Play-Doh time as kids, making butyl snakes to seal our new hardware. The holes didn’t exactly align, so I had taken the additional step of drilling them out and filling them with thickened epoxy last weekend. I also replaced the fender washers with some substantial backing plates, and I have every confidence that these are not going to pull through the coaming. The oozing butyl in the second photo is astonishingly similar some of Maine Sail’s in-progress photos, so I assume we’re doing this correctly. 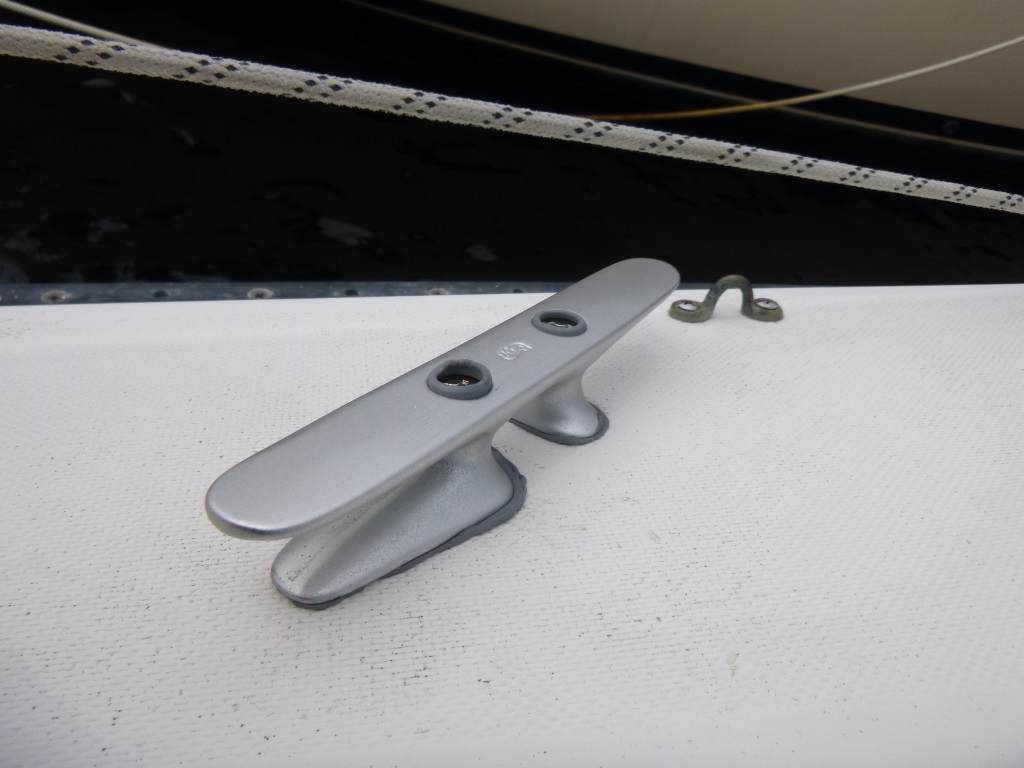 We also mounted the new tiller. It looks a little out of place given the current condition of things—like a Chippendale sideboard in a doublewide otherwise decorated in pizza boxes and industrial cable spools—but the rest of the boat will catch up. This photograph doesn’t show the tiller all that well, but I liked the reflection of the main sheet block in the flat section as an indication of the gloss. 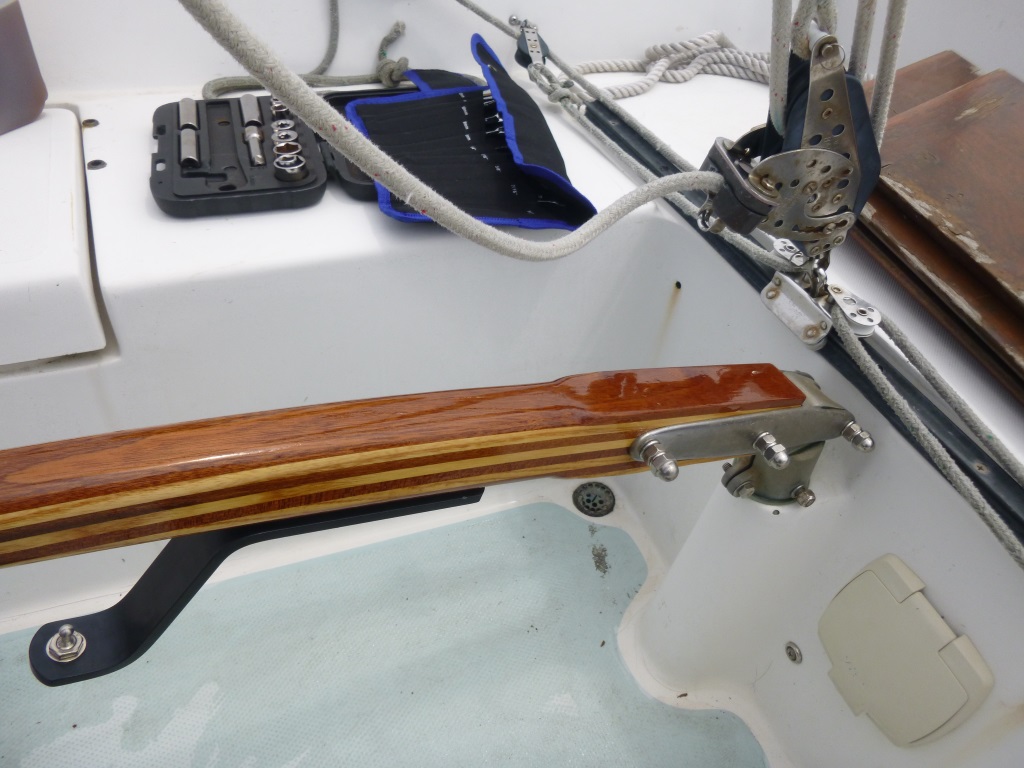 Maintenance is great and all, but our tenuous sanity requires that we occasionally actually sail the boat and we made sure to leave time to get out there and try this new stuff. Winds were 12-15, gusting to 20kts from the northeast, so we tucked in a reef and headed north toward 39. I still can’t get over how this boat powers through chop. I realize that these aren’t big waves in the abstract, but these would have worn us out on the 22 after a while:

Instead, we were treated to a relaxing sail up and down the bay. It had been lightly drizzling in the morning, and I guess that kept the boat traffic down. Jen thought that she felt rain early on, but I think it was just spray. We certainly didn’t get much if we got any, despite varied and turbulent skies. 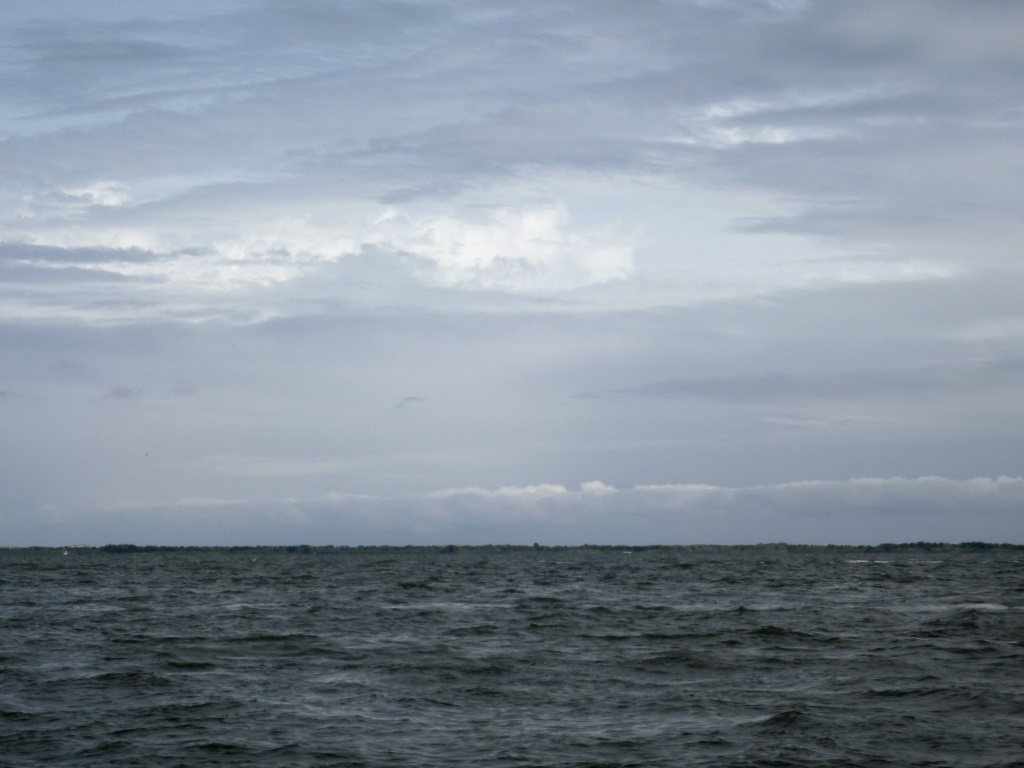 We turned around at 39 and headed back on a broad reach. Jen took the tiller for an extended period of time, and together, we tried to figure out the subtleties of steering in blustery conditions with waves on the quarter…fending off the weather helm in the puffs while not overcompensating for the boat motion through the chop. Sailing has always made sense to me, and I feel my way through a lot of it, for better or worse. Even when I was little, I have a distinct memory of being at the helm of my priest’s boat, trying to stay ahead of another boat a quarter mile off the beam, and asking my dad “can you get any more on that jib?” He looked over at the skipper, presumably waiting for his punk kid’s request to be overruled, and the skip just said “the man asked for more jib,” forcing my dad to put to put down his Manhattan and locate the winch handle. It’s entirely possible that I was just being indulged—logically, I must have known absolutely nothing about sailing at the time—but at the very least, it spurred a certain audacity. When Jen asks me to explain how I handle the boat in different conditions, I think it’s helpful for both of us, since certain aspects of sailing aren’t implicitly obvious to her and articulating what I’m doing forces me to think critically about my technique. 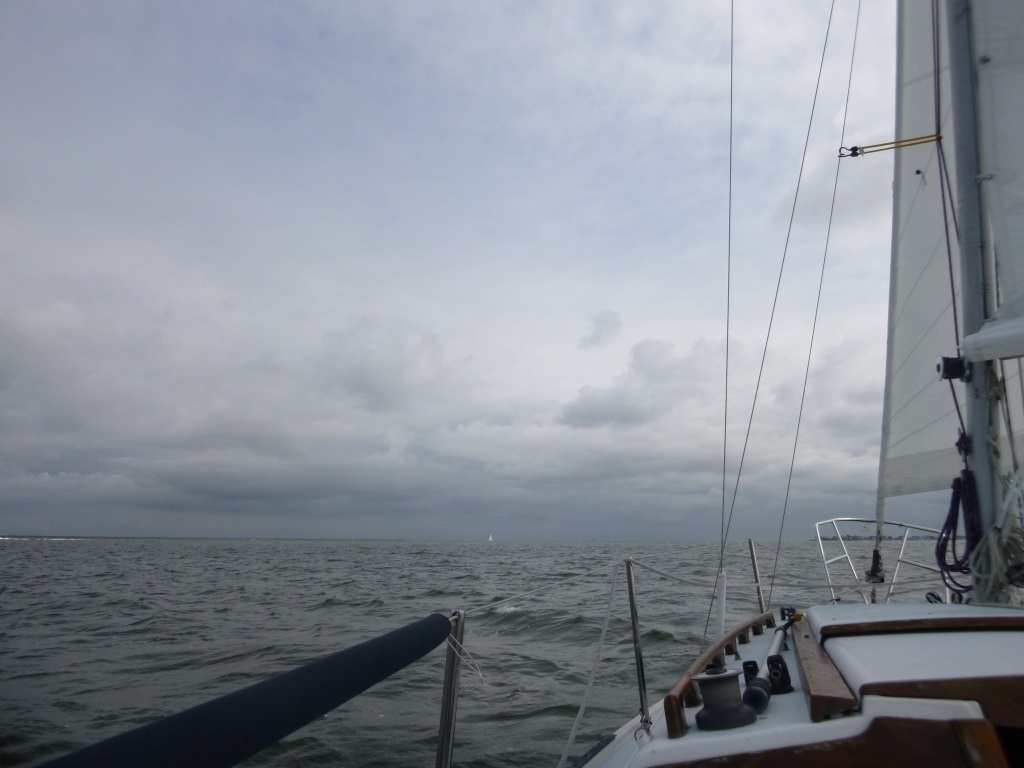 We were having so much fun that we went around for another lap, beating north almost all the way to 38 before returning. We were sailing so fast that we passed a powerboat. Ok, he may have been towing another powerboat, and the stricken vessel, which had a freeboard like a standup paddleboard, may have been routinely taking green water over the bow, slowing things down just a bit, but still…

I’m glad we spent some time away from the slip. We’ll continue to try to find the balance between maintenance and actual sailing as we make this boat our own.