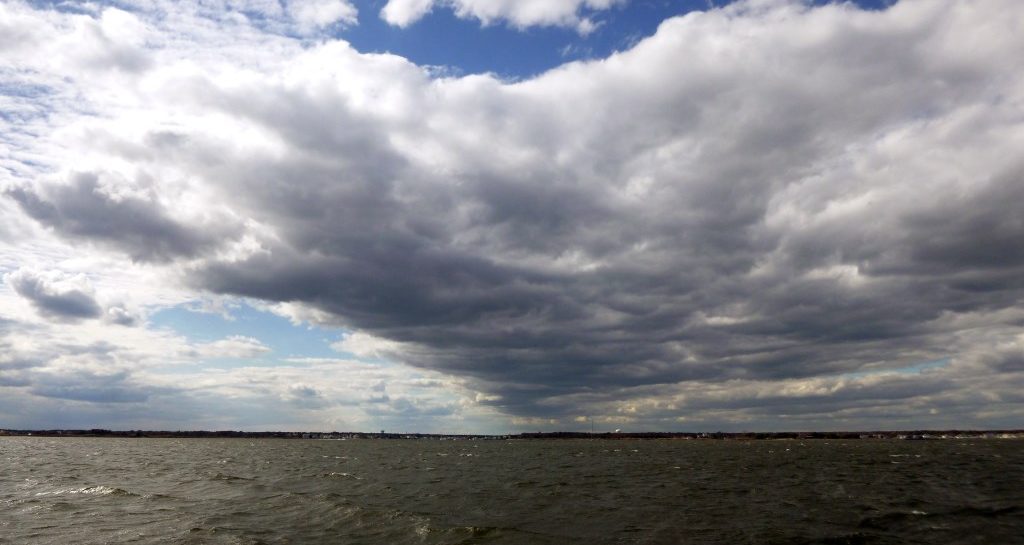 It’s October. I should have mowed my lawn a month ago, and now there are so many leaves jammed down into the gnarled thatch that I don’t know if I should mow it, blow it, or just walk away. I had to let it go one more week though, because the wind was up and there was racing going on.

Saturday was the annual running of the Windjammers’ Frostbite Race. Avid readers may remember last year’s Frostbite Race, during which we substantially bent our boom. Ugh. The primary goal for this year was to finish with all of our parts intact.

Eight boats raced, which is a pretty good showing for our club, especially given the conditions. I’m not sure that the air temperature made it out of the 50s, and the wind was probably steady 15-20, gusting to 25kts. One boat saw a gust of 32kts on their wind instrument, although I can’t corroborate that with any land-based sensor data. Additionally, Sailor Steve wasn’t able to race with us, so we roped Tim into filling in. I’m not sure what the nautical equivalent of “trial by fire” is, but it’s always best to break in uninitiated crew under a small craft advisory and torrential profanity. 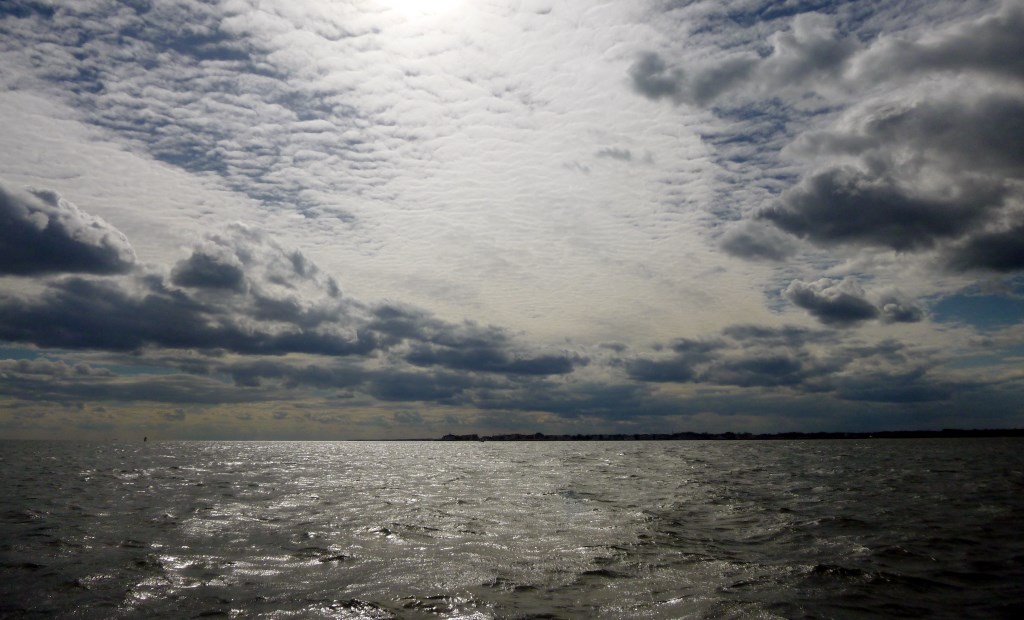 It is said, incorrectly, that humans only use 10% of their brains. Since getting abused in the Tall Oaks Challenge a few weeks ago, I had been devoting the balance of my otherwise quiescent brain power to figuring out why we couldn’t sail upwind. I kept coming back to an offhand comment from Ron during the post-race chit-chat that we didn’t have enough jib out. This time (in slightly less horrendous conditions), I was determined to fly enough jib to be able to claw our way to weather. Due in part to a somewhat misleading lull in the wind just before the race, we only had one reef in the main and a few wraps on the genoa.

The race was a typical windward-leeward course with port roundings. There was no committee boat, so we were on the honor system for the start. Jen had recently done something horrible to her telephone and couldn’t come up with a way to get the time in anything less coarse than full minutes, so tensions were already high as we circled behind the starting line. We also weren’t completely sure that the leeward mark had been set, and certainly had no idea where it was if it was out there, but I figured that we’d point downwind from the windward mark and hope to find it eventually.

Despite the early trepidation, we had an excellent start—third boat over the line grouped tightly with the boats who’d timed it slightly better. And then we rounded up, causing us to do a panicked 360. We recovered as best we could, but were in an early hole. Jen and Tim struggled to work into a rhythm with heavy sheet loads and Fortuitous on her ear. 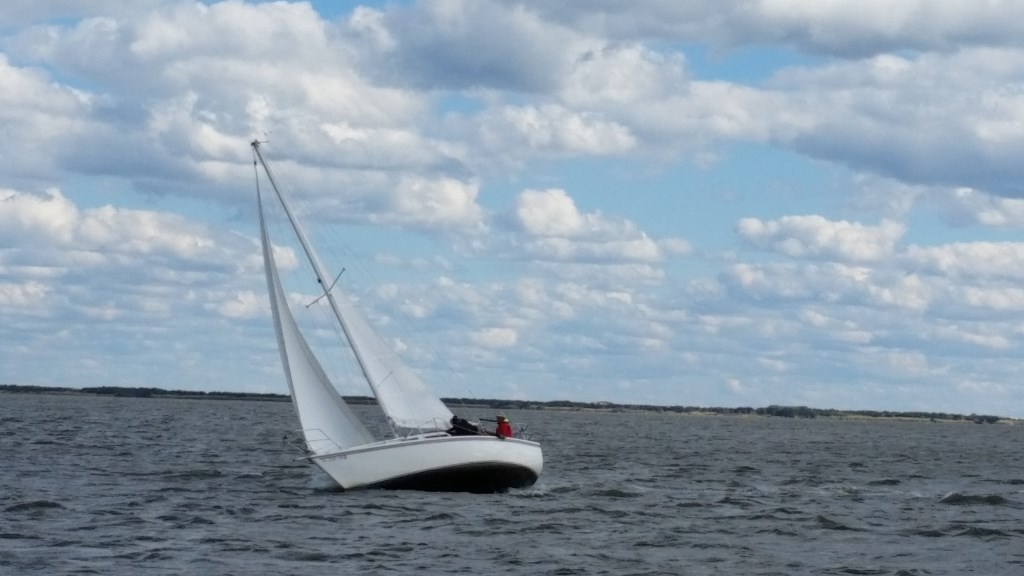 As we approached the windward mark, Lorelei was just ahead of us off our port bow. A huge gust of wind rumbled over the waves and pushed us both hard over. I had been riding the traveler to try to keep us on our feet in the puffs and let that go to relieve pressure, but Lorelei rounded up right in front of us and veered into our path. Having just been through that, I recognized the symptoms and crash-tacked to avoid hitting her. We backwinded the jib, spun around, and continued on to the mark.

The downwind leg was more relaxed without the ridiculous heeling, although we had a hard time getting the whisker pole set. In the process of rigging it, one of the sections must have come undone and retracted. I made the call to take it down and try to get it all deployed, which was probably a net loss as it just meant more time with no pole. We may have hit hull speed on just the main in those conditions, based on the size of our quarter wave, but when we did finally get the pole re-set I still took the opportunity to let out all of the 135 to get most possible projected area.

And then didn’t bring it back in when we came around the mark and headed upwind again. 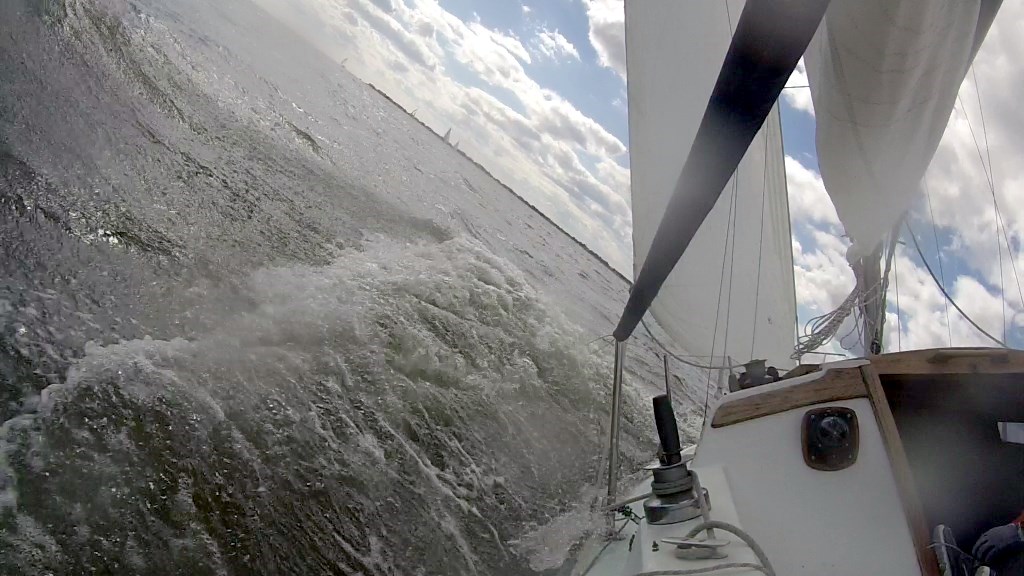 We powered through the rest of the race, falling slowly behind the other boats but not at an unexpected pace given that we were the smallest boat out there with the largest handicap. When I ran out of traveler, I uncleated the sheet. It was a bit of a wild ride.

We crossed the line last, with several boats milling around the finish line to record times and take photos. 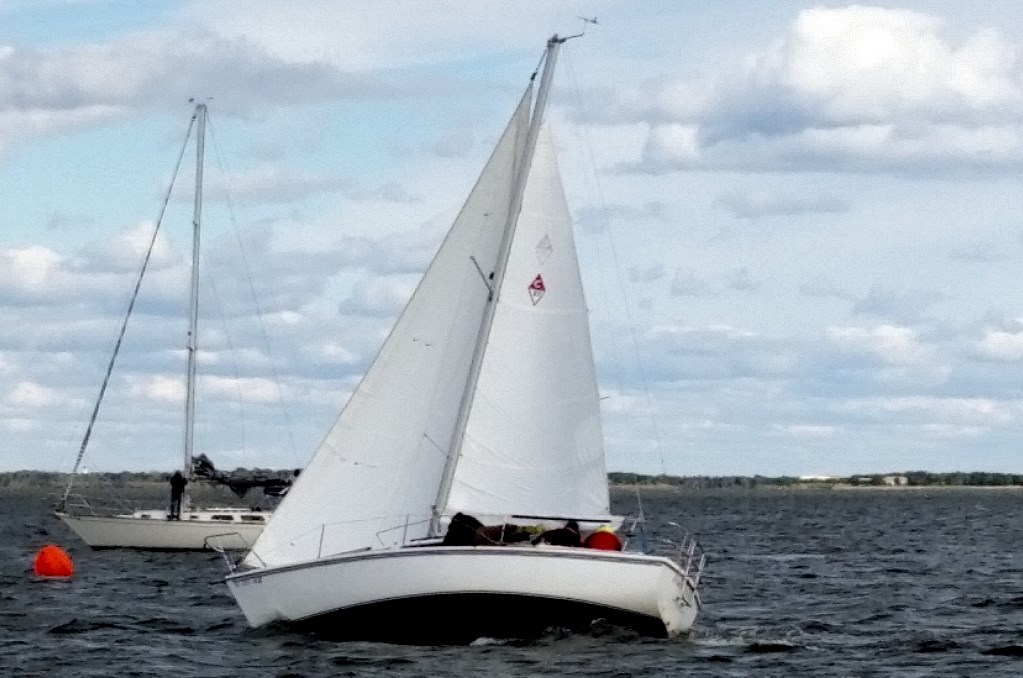 We weren’t that far behind the pack though, and at the Oktoberfest feast that followed, we learned that we had corrected all the way up to third place. The only boats who finished ahead of us were Providence II and Tiki, which are both thoroughbreds, with Tiki earning the top spot. Even though we made it into the money on handicap, I was really proud of our finish—yeah, we have a somewhat gaudy rating, but we’re still at a disadvantage when racing against larger, heavier boats in a stiff breeze. Lorelei was grateful that we didn’t T-bone them, and we got a lot of earnest congratulations while standing around the fire after the party. We may have been a little overpowered, although the results were certainly better than when we were underpowered. We’ll keep trying to dial it in. Jen and Tim were fantastic crew, and I’m glad that they put up with me and my sail selection under strenuous circumstances.

I was extremely sore when I woke up on Sunday morning. In addition to the general pain, I had some blunt force trauma to my right leg consisting of an unexplained laceration orbited by a bruise the size of a salad plate. I have no idea. I chugged down some ibuprofen, climbed back into my foulies, and headed toward Burlington for day two of racing, this time on Revolution with Sailor Steve.

The wind was howling on the river as we motored over to the Anchor Yacht Club for the captain’s meeting. I actually put on glove liners under my sailing gloves to keep my hands warm. Once we got behind Burlington Island though, things calmed down a bit and we convinced ourselves that we could get by with the 155.

Five boats entered this year’s Anchor Cup. The course was AYC to the Burlington Bristol Bridge, clear the deck of the bridge with your mast, turn around and go to the Turnpike Bridge, then back to Anchor. Our tactician, Other Steve, suggested that we start as far north as we could, in among the moorings near the marina. No one else thought of this and it was a huge advantage—with the NW winds, we were able to make it all the way to the first bridge in one tack without pinching. I’m not sure if we were the first boat over the line, but if not we quickly took over the lead as Sailor Steve expertly rode the lifts in the gusty winds.

We initially thought that we might have an opportunity for a long spinnaker run back from the bridge, but the wind was fluky and we somehow remained close hauled after completely reversing our direction under the drawbridge. Once we got back to the channel in front of Bristol we were able to mostly reach, but with odd winds winding through the buildings in town, Other Steve and I had to play the sheets constantly to keep the sails optimal. Schocking ran aground as we sailed away from Boomerang and Black Pearl. The only boat that could keep up with us was Rascal. We never relinquished our lead though and took line honors, narrowly coming in second to Rascal on corrected time.

What a fine end to the racing season. Someone commented in our last entry about how I’m apparently always racing, even when the other boats don’t know it. I’m not above daiquiri sailing and I like vacationing by boat, but there’s real art in pushing it; in putting your skills and boat and teamwork to the test; in making the best of what you’re given and wringing out every last tenth of a knot. We’re not there yet, but we’re making progress. A 2 and a 3 in late October is certainly better than raking leaves, even if I am devaluing properties as far away as the next town over. Thanks again to Sailor Steve, Tim, and Jen for excellent racing.

6 thoughts on “Last Weekend of Racing”