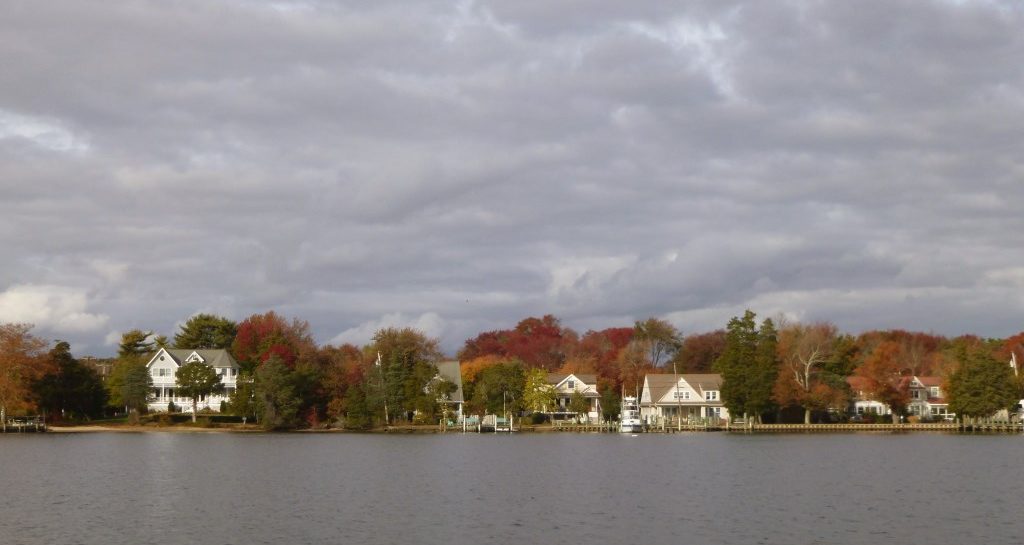 There are two schools of thought within our sailing club on how to conduct the annual banquet.

I probably know too much about this since I literally wrote the History of the Windjammers, but in the early days of the club, the banquet was held deep into the winter. This gave everyone a chance to reconnect outside of sailing season and provided a bright spot in an otherwise bleak period of the sailing calendar at this latitude. By the time we joined the club, however, it had been moved to late October or early November, which made it possible for members who migrate south for the winter to participate and (depending on the weather) sometimes allowed people to sail to the destination—often the Captain’s Inn on Forked River. These days, we’re back to having the banquet in January, but the late-season trips to the Captain’s Inn were so well liked that the tradition has continued regardless of the timing of the annual meeting. This year, for the first time, we decided to go too.

We departed on Saturday afternoon with air temperatures in the mid 50s and very light wind. I’ll admit that getting from our marina to the mouth of Cedar Creek is often more of a necessity than a pleasure—it’s a long narrow channel and the wind isn’t often aligned to sail it—but with the fall foliage under dramatic clouds, it was quite picturesque.

As we motored through the channel, we were passed by our old boat, Fortuitous [Implied I]. She also remains picturesque, and we’re glad that she’s still sailing. 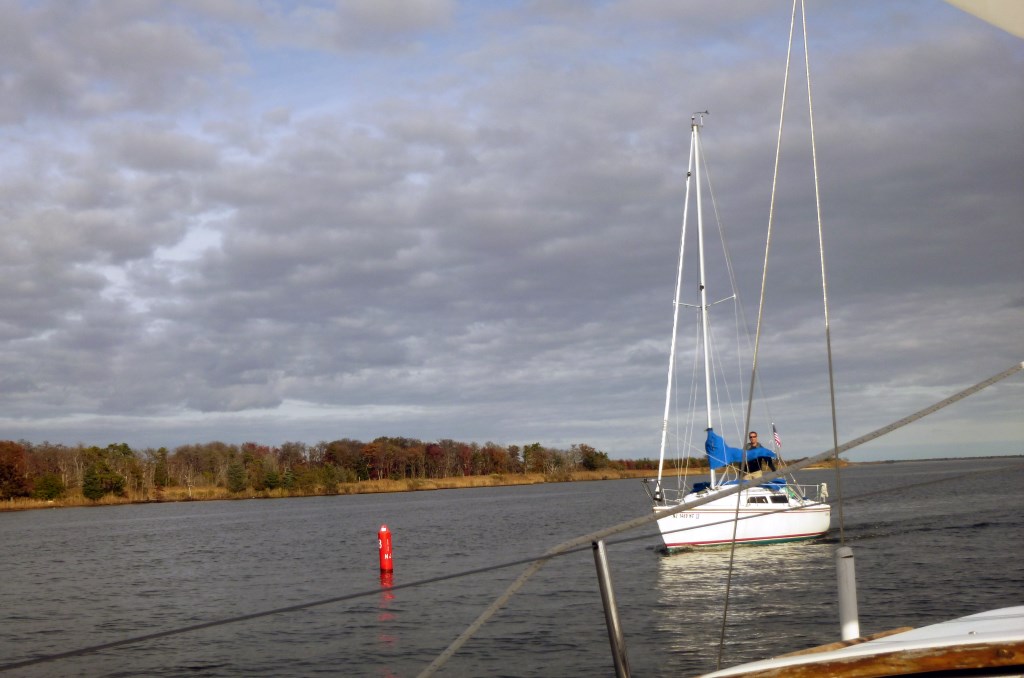 When we got out into the bay, we hoisted the sails and started making our way toward Forked River to the south. It was cool, but bearable without much wind, and we were prepared. It was finally cold enough for me to wear my Filson Jac Shirt, which is made of 18oz/yd wool and makes me feel even more like a 19th century explorer.

I think just about everyone else ran their engines the whole way, but we didn’t have any trouble moving along under sail. We weren’t breaking any speed records, but we also weren’t in any particular hurry.

We briefly considered cruising past BB and sailing around some more, but it had been a long time since we’d been up Forked River and we’ve never docked at the Captain’s Inn, so we thought that we shouldn’t push the waning light. We lowered the sails on the approach to the river and were treated to glowing golden marshes in the setting sun. 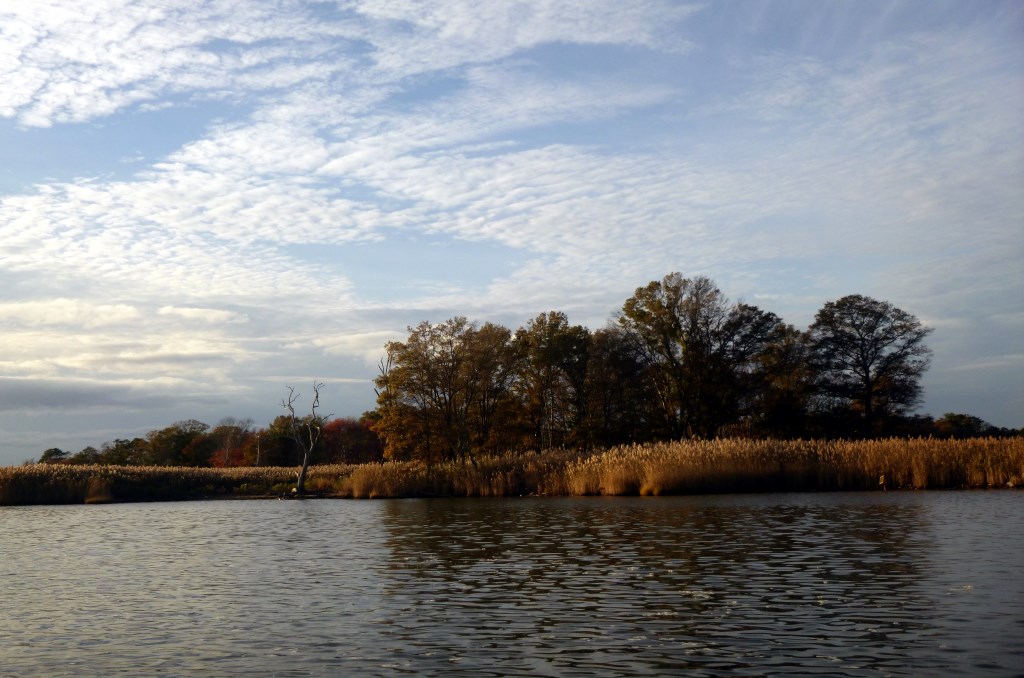 We docked, tidied up, and helped other boats tie up. In total, there were 9 boats, plus some additional folks who came by land. I poured a rather large mug of bourbon and wandered the docks while Jen got ready for dinner.

I couldn’t believe how busy the place was…they had guys directing traffic in the parking lot and the outdoor (enclosed) tiki bar was still in full-swing with a live band. Our commodore had made reservations though, and we were seated promptly at the designated time. We had a typically excellent meal with exceptional service—they even put us all under separate checks, which was impressive for a group of nearly 40.

After dinner most of the group spilled into the bar, and the festivities continued well into the evening. We retired to the boat and had a comfortable night at the dock despite the chilly temperatures. We brought our heater in case we needed it, but wound up turning it off…it’s not that hard to heat the interior of a sailboat.

It rained briefly in the early morning, but cleared up in time for coffee and bagels with the Windjammers. Some boats with deeper drafts were concerned about the water depth in the creek and left right away, but we lingered for a while, getting the boat ready for travel, and were the last to shove off. 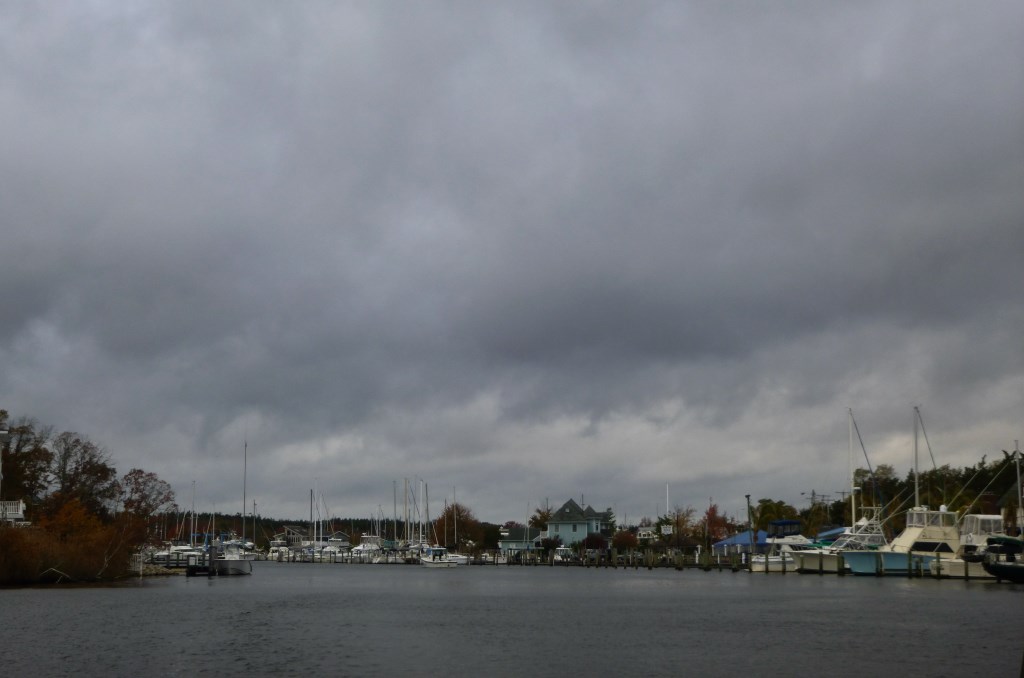 Peeps don’t let peeps say “leaf peeping,” if they know what’s good for them, but we did enjoy more of the colors of autumn as we putted out of the river. 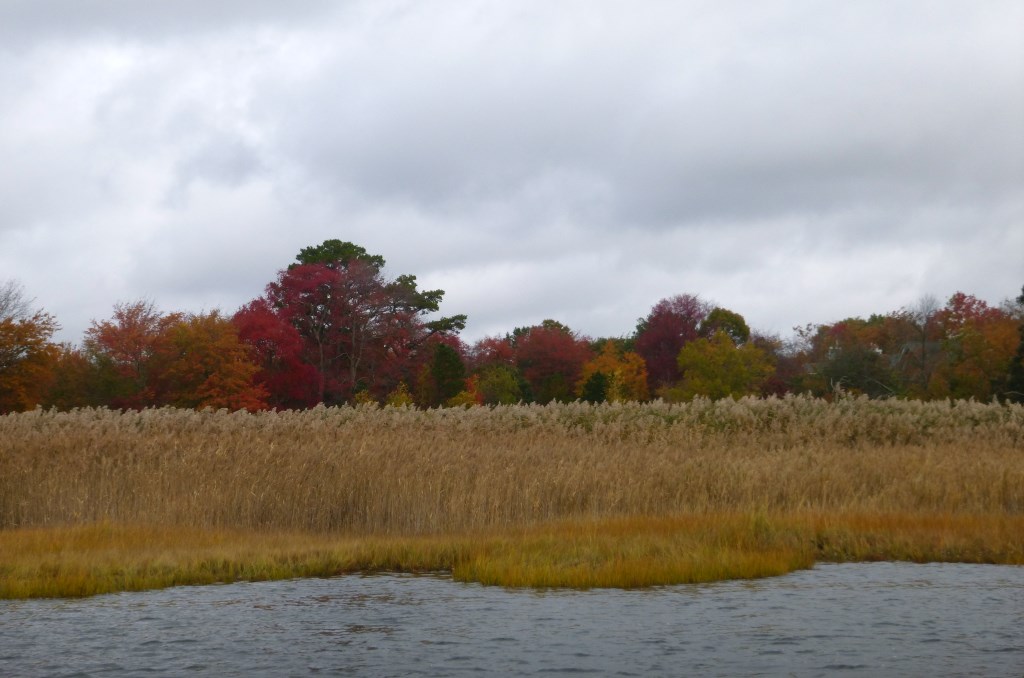 We weren’t sure if the rain was going to hold off, so we didn’t uncover the main. There was more wind than the previous day and we could make good time on just the jib. It’s not my favorite way to sail, but it’s ok off the wind. Once we saw the last of the Windjammers go around the corner into Cedar Creek, there were long stretches when we couldn’t see any boats at all. We had the bay to ourselves. When we got to Marker 40, we decided to just keep going. 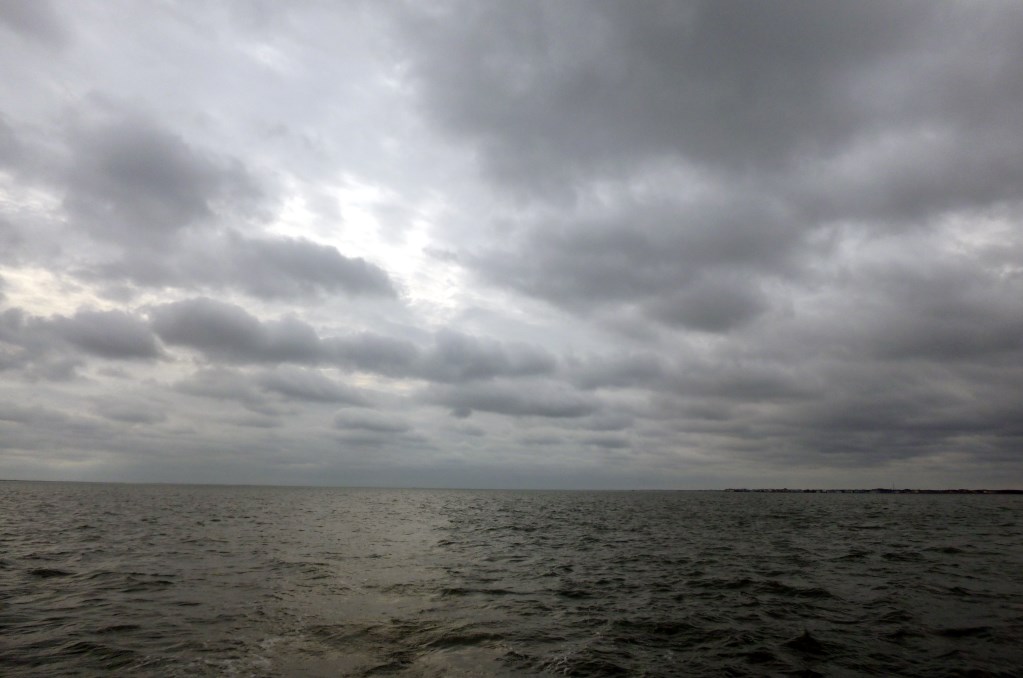 Two chevrons of cormorants appeared, stretching across the entire visible length of the bay, skimming just over the surface of the water. After they passed, we saw a solitary swan, half way to Tices. I’d never seen one so far from land.

Jen said, “OH NO! I think his wife died and he’s going out to sea.”

“Eh, they’re like the only bird that’s meaner than a goose.”

“Oh, I feel bad for him. I think they mate for life. He’s grieving. But yeah, I would totally lose a fight with a swan.”

“What?” I replied. “Not that I want to get into a fight with a swan, but if it came down to it, a human would still win.”

“They have little hollow bird bones and we outweigh them by a whole hell of a lot. I’m not saying you’d get out unscathed, but they’re going to lose eventually if both parties want to take it that far. At least on land.” While we were debating the intricacies of swan combat, a flight of six or seven more swans swooped in to join him.

Eventually we had to turn around and head back. Fortuitous [Implied I] must have just sailed out of the creek as we were returning, and they snapped a picture of us from relatively long range in front of Berkeley Island. 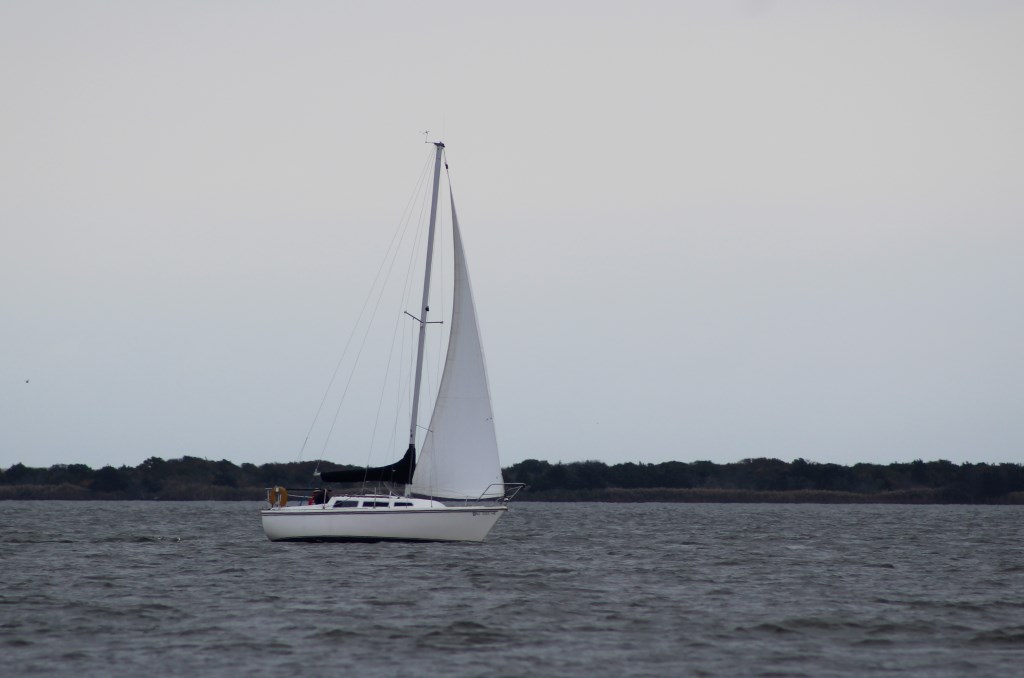 It’s getting pretty late in the season, so we’ve got to try to make the most of whatever sailing we have left. I think we did that successfully with weekend, with a couple relaxing sails, good food, and good company.

* No swans were harmed in the making of this log entry.