For a few years, the Windjammers have been toying with the idea of having a regatta on the four Friday evenings surrounding the Summer Solstice, the theory being that the long days would allow for late starts, giving crews time to compete after work. This year it finally happened.

Despite the relatively late start time, I work a long way from the shore, so I’d planned to take a half day. Following several extremely stressful days at the office, I couldn’t get out on time, and every minivan with a Ron Jon sticker in Eastern Pennsylvania had already begun jamming up the escape routes. I had to go home first, which isn’t exactly on the way, due to an intricate series of previous failures that prevented me from preparing my weekend go-bag. I texted that I was running late.

While burning through the woods on the back way to the shore, I tried to listen to some really smooth music and get my head straight to sail. While I race on Revolution every week, I don’t think I’ve skippered a race since Tall Oaks 2016, which included a fairly significant collision with a teammate. I was planning on taking it easy and trying to have it be a fun race, whatever that means. The Windjammers mantra is that they don’t take racing very seriously and that it’s just “for fun,” but the fun part of competition for me is usually to be proven empirically better by slaughtering my opposition.

By the time I arrived, Jen and Sailor Steve had already gotten the course information and prepped the boat. We quickly got underway and started heading toward the starting area, a little under a mile west of marker 40. Wind was just about perfect, around 10 or 12 knots from the west. There were five boats from the Windjammers. Tall Oaks was also invited, and the start was delayed by fifteen minutes to give them time to arrive, but no one came.

While perhaps inelegant, we started well. We had to throw in a couple quick tacks near the line to kill time, but we started in clear air and in the mix with the other boats. We were fast on the first leg, although we tacked too soon to lay the mark and wound up having to give Tiki and Island Breeze room to round 40 on the inside. We set the pole on the second leg and passed Island Breeze, but Restless got around us. At the pin, the boats ahead of us had decided to go upwind on the other side of the course, starting on port tack. My instinct was that they weren’t far enough ahead of us to overcome our PHRF rating, so I followed them with the intention of just keeping it close. The wind had died down by that point, and we weren’t as fast, or maybe I was pinching, but we couldn’t catch up to Tiki or Restless. We wound up finishing in that order, both in real time and with correction, with Fortuitous taking third. 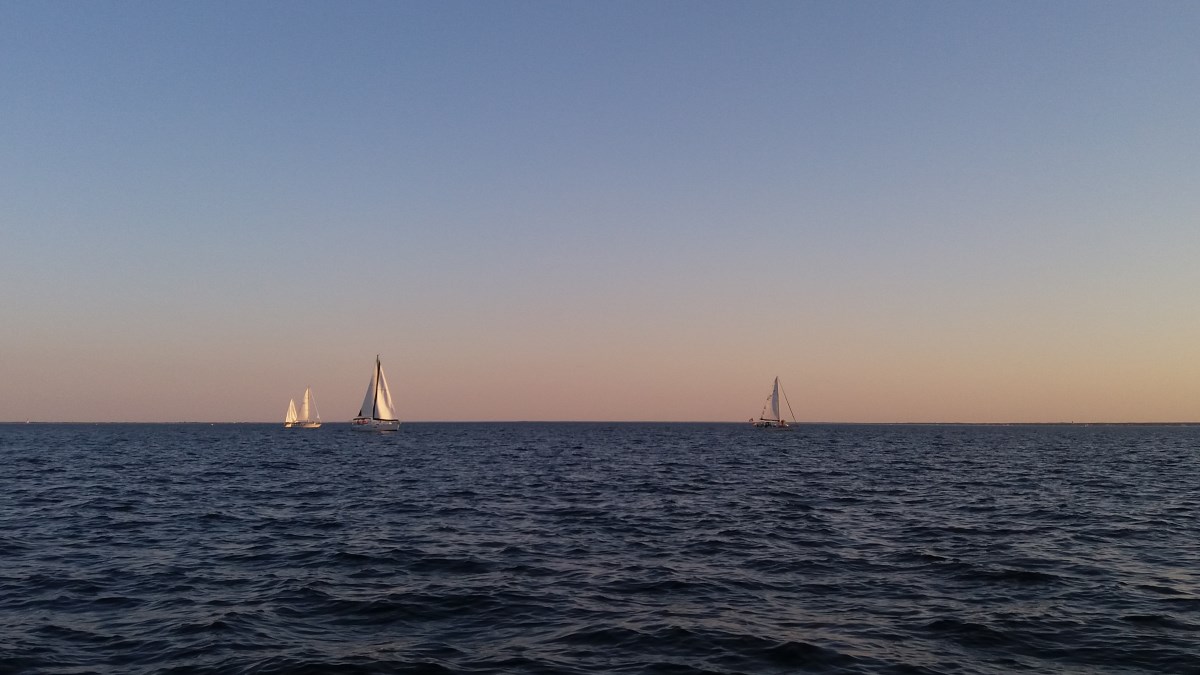 Back at the dock, the racers got pizza and beer. I was treated to some good-natured ribbing about losing to a boat that still had its dinghy in the davits and was “thanked” for not forcing them to tack just because I was on starboard. Then there were some hi-larious jokes about how I let a boat still carrying its dinghy in the davits pass me and how I didn’t force them to evade me just because I was on starboard tack. Oh, and you would have loved the other jaunty talk about—get this—one of the boats that beat us still had its dinghy in the davits. So, I guess that will about do it for the “fun racing” and pre-race Steely Dan chill out sessions.

We stayed overnight and had a chance to get in some early morning sailing on Saturday, although Jen slept in and there was no wind in the morning. Even by the time we got out, around 11:30, the bay was flat. On our way out of the creek, I asked Jen, “How did that powerboat get there?” 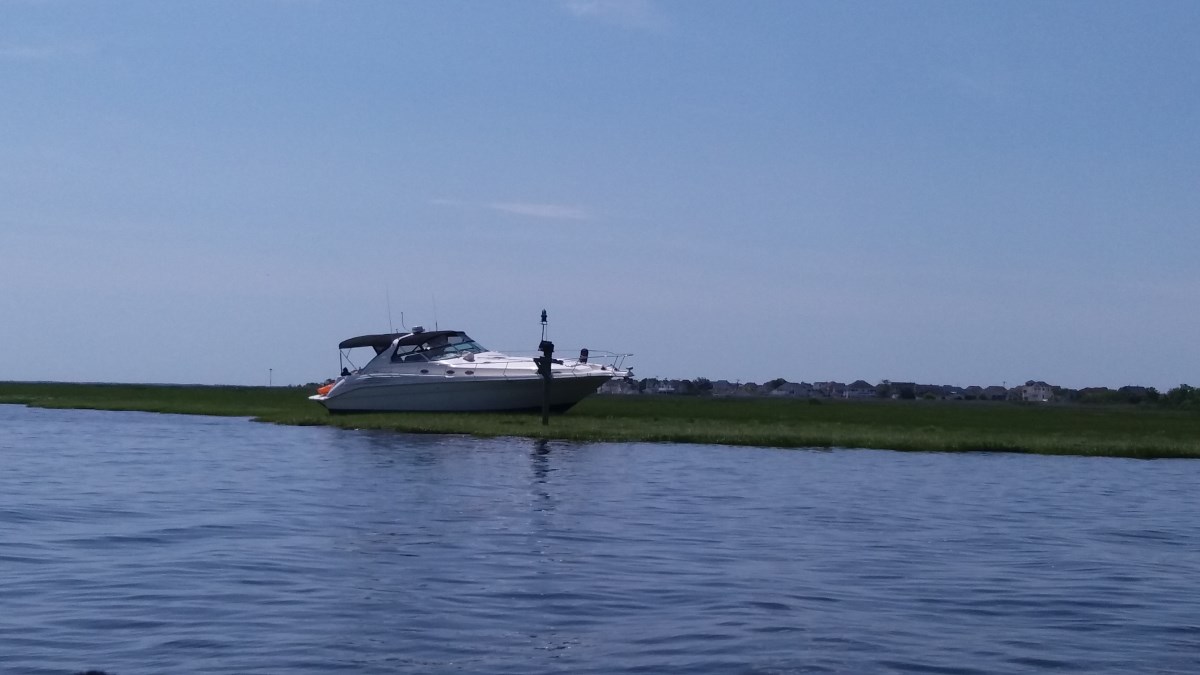 Missed it by this much.

Outside the creek we hoisted sails, but there was barely enough wind to move us. At noon, it was like someone flipped on a switch and a southeast wind kicked in. We sailed along with Elenora for a while, before they passed us as if they had a dingy in the davits. 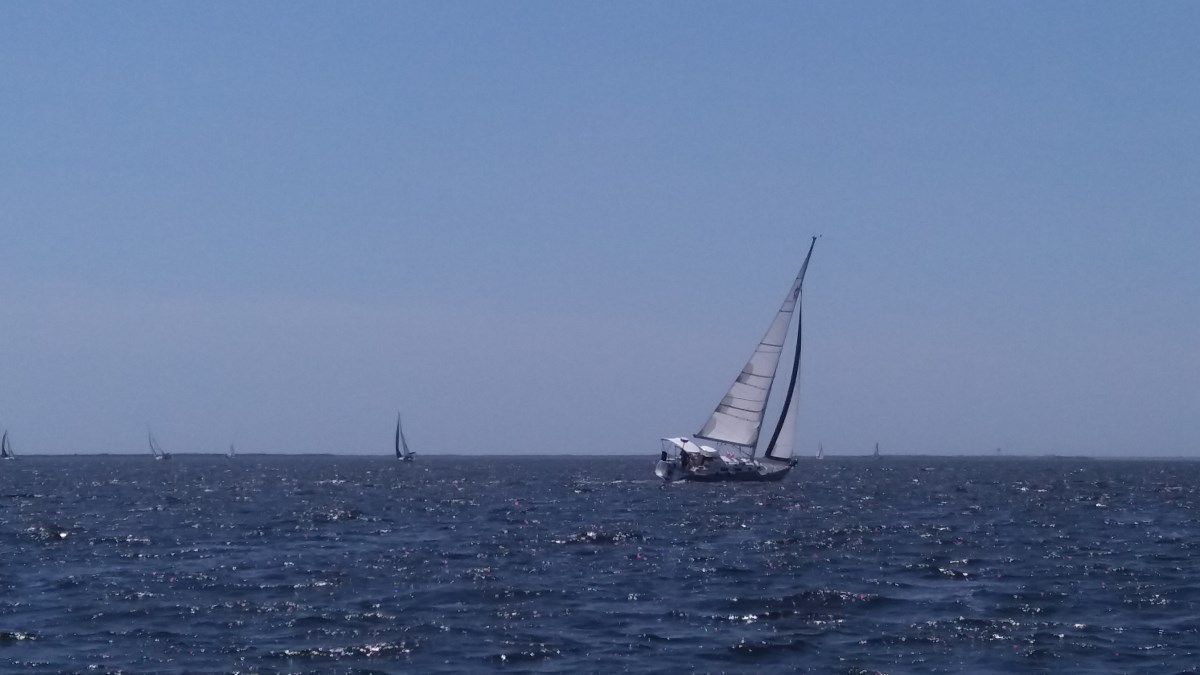 We continued on, unusually close to the western side of the bay. The wind was southerly enough that we couldn’t point any higher, which also kept us out of Tall Oaks’ race course. With temperatures finally in the 80s, everyone was out. There was even some unusual traffic, like an excavator on a barge being pushed by a tiny pusher tug. 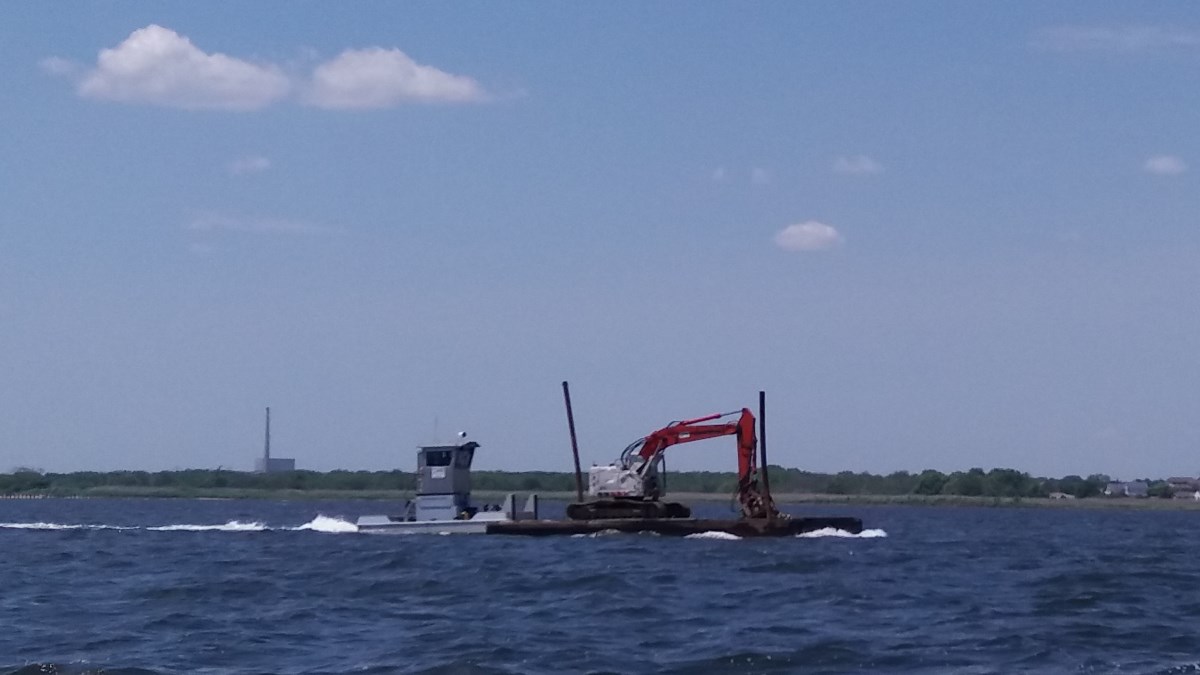 At BI, we turned around and sailed back on a broad reach. We could see the Tall Oaks committee boat picking up marks, so we knew their race was over, and sailed through what had been their course. We picked our way through the drifting fishing boats and made our way north. We came upon Elenora again and I noticed that she’d tucked in a reef. Sometimes when sailing well off the wind for a while, I don’t notice that the wind speed has increased, but I started paying attention and noticed that there were now whitecaps and that we were absolutely flying. It was still early, and we had time to kill before the Windjammers’ annual chicken and ribs dinner, so we sailed on past Cedar Creek up to the northern part of the bay under full sail.

When it came time to come about, we furled the jib entirely and came head to wind to tuck in a reef. This turned into a bit of a fiasco because it was now blowing 25kts and we’re not that adept at putting in a reef under sail. I started the engine to give us some maneuverability and we eventually got it done. 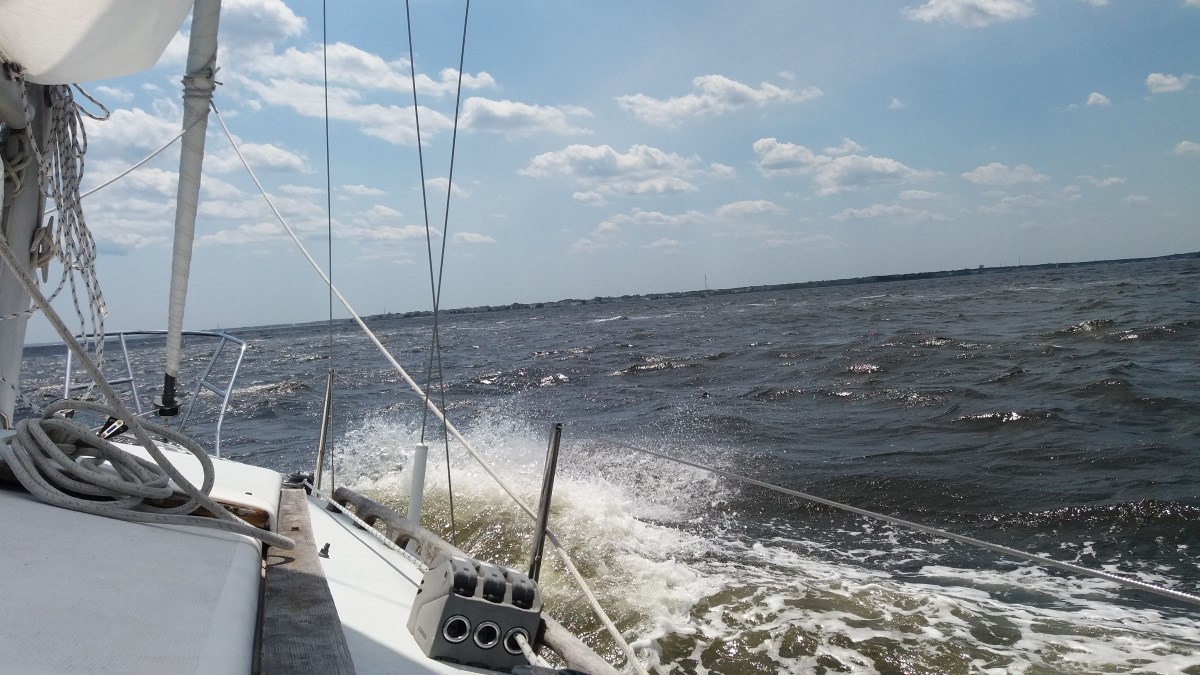 We continued sailing on just the reefed main for a bit, just to see how things were going, but the wind and sea conditions were tiring and we decided to pack it in. I sailed a good distance up the creek (now made much easier since the markers are finally in).

As we made our way along the marsh near the mouth of the creek, it became obvious where that barge and excavator had been going. 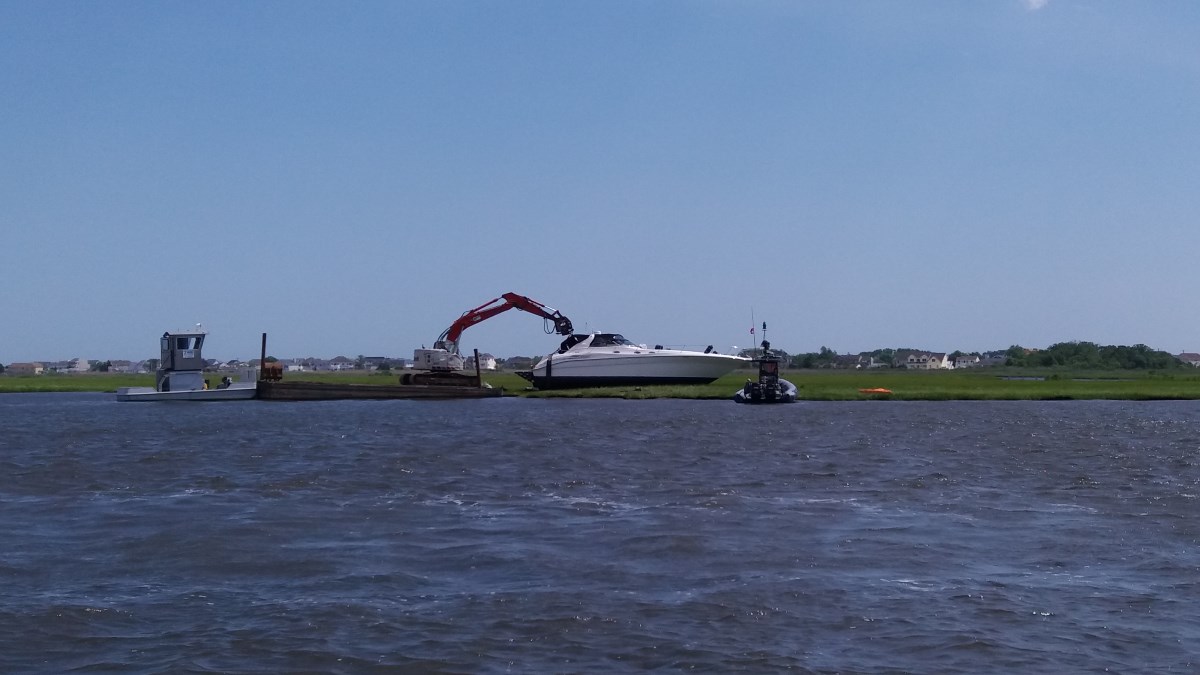 They were violently rocking that fully-grounded powerboat that we’d seen on the way out, trying to dislodge it from the turf. If they didn’t wreck their propulsion systems when they launched it up into the grass, there’s a good chance that they did trying to get it out. It looked like a very expensive mistake. We didn’t stay to gawk (as several other boats had done, just outside the channel) and continued on to our slip, where we somewhat reluctantly went to the Windjammers’ dinner.

Sailing on Friday made the weekend seem longer than usual, and we got in a couple good sails. Jen declared that Friday’s race was her favorite race ever. While I’m proud of the crew and we didn’t make many obvious errors during the race, I’ll be thinking of ways to improve. As Revolution has shown, being consistently good is better than being occasionally great in a regatta, so we’re not out of it yet, although we’ll have a hard time beating the naturally faster boats on short courses where our rating doesn’t kick in as much. At the very least, I know that I’ll be listening to some early Metallica before the next race.