While third place may still get you a podium at the Olympics or pay out on a bet to show at the racetrack, I was not satisfied with coming in 3rd of 5 boats in the first race of the Windjammers’ Summer Solstice Regatta.

I was convinced that Fortuitous should be demolishing the larger, heavier boats in these light-air evening races, and in the excruciatingly long week between contests I had plenty of time to think about what I could have done better. In contrast to last week’s chill-out session in the car ride to the shore, I arrived at the marina half deaf from blasting Metallica across the entire width of New Jersey.

“Orion,” from Metallica’s Master of Puppets

I thought that Sailor Steve wasn’t going to be able to make it and that we would be sailing double-handed, which completely thrilled Jen (Jen’s only interest in racing is in trash-talking our opponents, not in the actual racing part), but he showed up at the last minute. I hadn’t even bothered to get racing beer, so Jen left to run up the street and get some while I prepped the boat. While she was gone, all of the other boats left, and I started to get anxious that we were going to be late to the course.

When Jen returned, we left immediately and I quickly took us to our cruising RPM upon leaving the marina.

The wind was light again—around 10kts. The infinite grayness of the water and sky belied the clear radar report. It wasn’t quite foggy and I’m not sure that it was even misty, but the air was heavy with humidity to the point where it turned Island Beach into a flinty gray blur on the horizon. To the west, there was a fine line of light creeping in from under the end of the cloud mass. 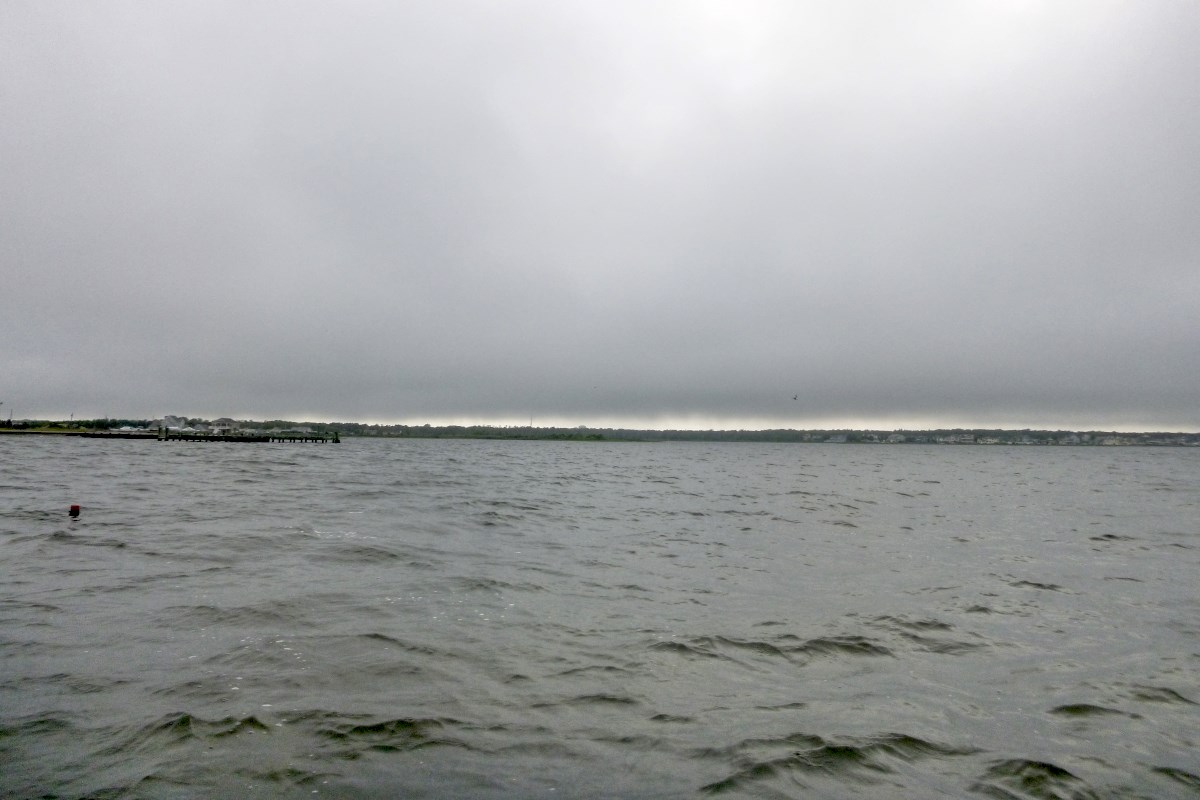 With winds from the northeast, the course was moved a bit to the north from last week’s location. The starting gate was set near Holly Park and the windward mark was to be Marker 39. ICW Marker 39 is not a buoy—it’s a steel pipe of significant diameter, driven into the floor of the bay with a large platform on top made of I-beams and more steel.

With three minutes to go before the race, we were at the starting pin, and I intended to sail away from it on a beam reach for 90 seconds and then sail back, hopefully arriving there right at the start. It didn’t quite work out that way, and we were the fourth boat of a tightly-packed bunch to cross. In total, there were six boats, and the other two crossed well after us. We started on starboard tack, which seemed to be the preferred tack, although Sunset and Restless soon tacked over to port and started making their way to the other side of the course.

By the time we tacked and crossed paths again, we were several boat lengths ahead of Restless, and had caught up to Sunset. We came around 39 and set the pole for the downwind leg back toward the start. Over the course of the leg, we passed Sunset. Tiki was well ahead, which is where they’re supposed to be as the scratch boat, but they rounded the wrong side of the starting line. The race committee had made it clear that the yellow inflatable was to be the leeward mark, so as far as we knew, they were going to be disqualified for not completing the course.

As we came around for the second lap, I briefly got us caught in irons coming upwind, which allowed Sunset to catch up. This was a stupid mistake on my part, and I felt awful about giving up the lead, but we got going after some floundering near the line and soon overtook Sunset again going upwind.

We were alone in first (depending on how Tiki got scored) as we tacked to lay the windward mark. The Metallica was working. Regardless of Tiki’s status, we were dominating the rest of the field, all of whom owed us time on our handicap. I was already picturing how this was going to make up for last week’s “fun race.” America’s Cup skipper Ted Turner once quoted the manager of his baseball team from the deck of Courageous, saying that he spelled “fun” W – I – N.

As we approached 39 for the second time, it became clear that it was going to be a tight rounding. I didn’t want to lose time by tacking twice to get around it, and I was pretty sure that I could squeeze by. We tightened the main sheet another two inches and all got on the leeward side of the boat to induce heel, allowing us to point a couple degrees higher. As the hull slipped around the base of the mark, I was sure that we’d made it.

And then there was a series of unholy noises. A bang. A grinding sound. A banjo being tuned past pitch. Although the hull of the boat had made it, as I continued the turn, the backstay caught the upper parts of the mark and jerked us to a violent stop.

It took me a few moments to even figure out what had happened, and then a few more before I could look up to see if the rig was still intact. It was, although the backstay was bent at a horrifying angle. Sailor Steve jumped up to try to hold the boat away from the base of the mark. I slowly started thinking. I rolled up the jib and asked Jen to drop the main. I didn’t want them to get ripped, and the drag from the sails was keeping us pinned to the mark. I started the engine and, after a brief eternity of coaxing us in reverse and banging on the stay to get it to pop off, got us untangled. When the stay came free, we started going backwards and the shrouds almost got caught, but Steve pushed us off. I threw the transmission back into forward with my foot and got enough rudder control to move us away from the mark.

By the time we got unstuck, we’d been passed by most of the other boats. The rig held, but I wasn’t sure if the backstay was weakened. We still would have had to do penalty turns for hitting the mark, and Jen and I didn’t feel comfortable putting the sails back up without having a chance to inspect things, so we retired from the race and cracked the first of a few conciliatory racing beers.

Hubris? Being too aggressive? I don’t know. We still would have taken first or second if I had thrown in tacks, and it was just dumb to try to sail that close to an immovable object. Upon inspection at the dock, the backstay looks ok, so we took no damage and no one got hurt, but it will be another long week of thinking through what went wrong.